Would you loan someone $10,000 then expect back less in a year? Over $17 trillion in bonds are yielding negative interest rates. As we know, the European Central Bank lowered its deposit rate from an already negative -0.4% to -0.5%. Hail Mary pass anyone? The idea the ECB would extend their current commitment not to raise rates until the middle of 2020 is laughable. In reality, they not only didn't raise rates, but announced they will have to lower them via a resumption of QE. The ECB said it would begin buying 20 billion euros a month worth of securities beginning Nov. 1. Moreover, economists were describing the ECB’s asset-buying plan as “open-ended” QE, with policy makers pledging to continue purchases as long as necessary to reinforce the accommodative impact of its policy rates. They said rates would remain at present or lower levels until inflation rose to the bank's target rate of just under 2%. Inflation has remained stubbornly low. They forecast inflation would not rise to their target level until at least through the first half of 2020. Meanwhile, President Donald Trump wants the Fed to drop rates down to 0% and go negative if necessary.

Skepticism of an economic recovery remains. The chief European economist at Capital Economics said, “We will get more details in the press conference shortly, but on first glance this looks like a pretty dovish package. It remains doubtful, however, that this will do much to reboot the euro-zone economy let alone achieve the near-2% inflation target."

And this despite a decade worth of quantitative easing. Well, the central bankers did get a decade worth and then some of kicking the can down the road. That said, the world sits at major tipping points regarding fiat, interest rates, and major paradigm shifts as the race to the bottom between fiat and interest rates remains. 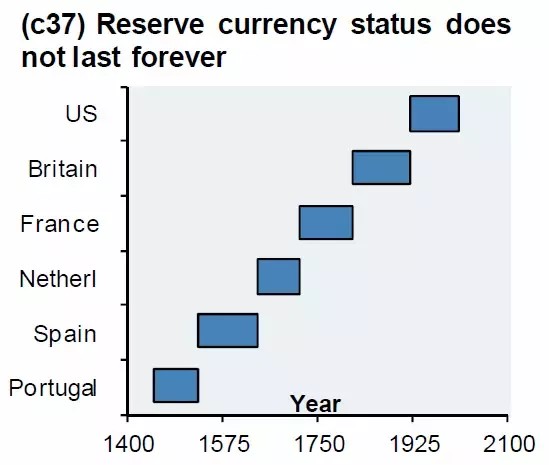 The Rise of the Decentralized Protocol

Given the situation in which the planet finds itself, blockchain technology could spur a major paradigm shift by facilitating the storage and transfer of value in a decentralized manner. Blockchain technologies are protocols. Protocols are how we communicate things so the one that achieves the network effect can be the winner-take-all technology. Once established, protocols are difficult to uproot. For example, language is a protocol. It would not be easy to uproot Japanese with a different majority language in Japan.

Bitcoin is an app layer built on a decentralized protocol. Bitcoin is becoming increasingly likely to be the tech for wealth storage and value transfer using the blockchain protocol. This would then serve as the major market, above and beyond fiat. While this sounds like an impossibility since fiat has always reigned supreme, markets are cold and clinical in terms of fairness and possibility. Free markets gravitate to efficiency. Controlled markets via dictatorships do not, or rather, are prohibited from doing so. If history is any guide, such controlled economies will continue to lag their freer counterparts. China is a unique case as it is the first hybrid to practice capitalism under the guise of communist control. Its growth cannot be ignored as I have mentioned in prior articles.

In the case of a protocol market such as blockchain's bitcoin, such a market would potentially overtake both controlled and free economies while bringing incorruptibility. When the bankers crashed the market in 2008, they got bailed out. Some major zombie banks were considered "too big to fail." With bitcoin, such crony capitalism is eliminated.

Bitcoin uses cryptography to send codified value around the planet to anyone with an internet connection. No intermediaries are needed as a growing number of bitcoin holders use decentralized exchanges, or DEXs, to move their coins. Liquidity in DEXs had been prohibitively thin compared to centralized exchanges such as Binance, Bittrex and some Chinese exchanges. But now, due to connectivity of the larger DEXs such as KyberSwap, Freewallet, and Trust Wallet to numerous other platforms (wallets, other exchanges, etc), they offer fast transactions between bitcoin, fiat, and altcoins within slippage often contained to within 3%. 3% is a large amount if one is trading frequently, but this should shrink as liquidity increases. Further, as I've advised in an earlier piece, far greater profits can be attained by picking the right altcoins then holding through a major bull market as bitcoin wends its way higher as we saw from Jan-2015 to its peak in Dec-2017. Moreover, the length of bitcoin's bull markets continues to grow, though various metrics I use have so far called the top of every major bitcoin bull market, the last one being my market call on January 29, 2018 when I sold all my altcoins and went to cash. If history is any guide, the next top may be more than a year away, but of course, the technicals rule all in terms of picking tops.

Bitcoin has won the network effect thus is increasingly likely through also the Lindy effect to become the means for wealth storage and value transfer. Bitcoin may have no underlying value but that misses the point entirely. The value in its 'killer app' is its intrinsic value as a decentralized, censorship-resistant framework which disrupts regulation and escapes every third party’s attempt to govern and control it.

Bitcoin has no face, no body, no soul, no cognitive capability. It is the ultimate free market. It simultaneously exists nowhere and everywhere. It is sociologically trustless as it places trust in a cryptographically secure algorithm. It is immune to inflation thus its value cannot be degraded unlike major fiat currencies such as the dollar which is worth just a few percent of what it was worth a hundred years ago. Bitcoin is hardcoded to have 21 million bitcoin in existence by roughly 2140.

Other examples of protocols that became standards are TCP/IP which serves as the backbone for the internet and SMTP for emails. Just as with bitcoin, both are decentralized and owned or controlled by no one. All had first mover advantage thus were first to achieve the all-important network effect.

Centralized examples also exist such as Amazon and Ebay, but unlike those companies, both Google and Apple are centralized gatekeepers. They hold a disproportional amount of power as the app store is the critical access point into the entire techno-ecosystem. Further, the coders who program the search engine algorithms at Google arguably hold the most power as they can manipulate search outcomes, thus shape cultural beliefs and election outcomes. Rest assured, Google’s ‘leftist’ bent manipulates search results as they have done for big pharma as shown in studies done by renowned fitness guru Ben Greenfield, fee.org, and selfhacked.com HERE.

This catalyzes the need for not just privacy and security but also incorruptibility. All such factors will be dominant. Singularly, the Facebook fiasco left its scars. Cambridge Analytica was a major political scandal in early 2018 when it was revealed that Cambridge Analytica had harvested the personal data of millions of people's Facebook profiles without their consent and used it for political advertising purposes.

In the coming years, decentralized protocols that dominate in various areas will emerge as the world becomes increasingly decentralized, with decentralized applications (DAPPs) and decentralized autonomous organizations (DAOs) not owned or controlled by anyone. Indeed, decentralized exchanges (DEXs) that exchange anything from tokenized stocks to bonds to carbon credits to CPU power to file storage to wifi bandwidth to YoUber™ (Dr K trademark) stand to co-exist with centralized ones, and perhaps overtake them at some point. Private, secure, and decentralized versions of facebook, twitter, and other major social networks will potentially displace the centralized versions. As I've said, a brave new world awaits so buckle up. The pace of change is accelerating as we go up the steeper part of the parabolic curve.