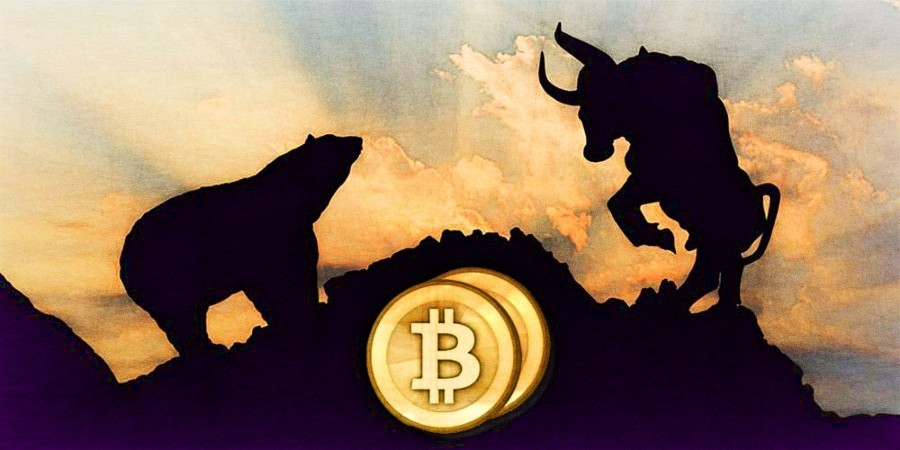 Many have asked if we have hit a market top in crypto. BTC and other major leaders like LINK, SNX, and AAVE seem to be struggling.

Based on my metrics, we have not hit a major market top, but a minor top within a bull run. This is our fourth minor top this year. Minor tops occur with regularity during bull runs where bitcoin can correct by as much as -40% and alts a lot more as correlations remain high. Other coins such as ethereum and alt coins get pulled down along with bitcoin. Usually, it is negative news or profit taking or whales gunning for complacent investors especially in the futures markets that cause the correction. Indeed, nearly $10 B in liquidations occurred shortly after the April 13 breakout in bitcoin. Two major tells were excessive futures open interest and elevated funding rates.

Some of the other metrics I use that can cause swings in price including Grayscale lockup expirations, major mining pool activity, Coinbase premiums, and the flow of bitcoin, ethereum, and USDT onto and off of major exchanges, all of which are viewable on the blockchain. This gives me insight into whether there is a big bout of buying/support or selling ahead which can cause a correction of several percent or more in bitcoin within a few days or less.

Monday's bounce in bitcoin is no coincidence as a number of these metrics converged, thus boosting the odds that bitcoin had found a low.

If we take the 50,000 foot view, one can see that U.S. households using various pioneering technologies from 1860 to 2020 take on the shape of an S-curve. People tend to be skeptical at first, which represents the bottom of the S where adoption is slow, then once great utility emerges, a sharp rise in mass adoption takes place forming the long nearly vertical part of the S. Finally, the market becomes mature and more saturated which represents the nearly flat, top part of the S. The crypto market is just launching into the steep part of the S curve, so as I've been saying, the real acceleration in the cryptospace has just begun. 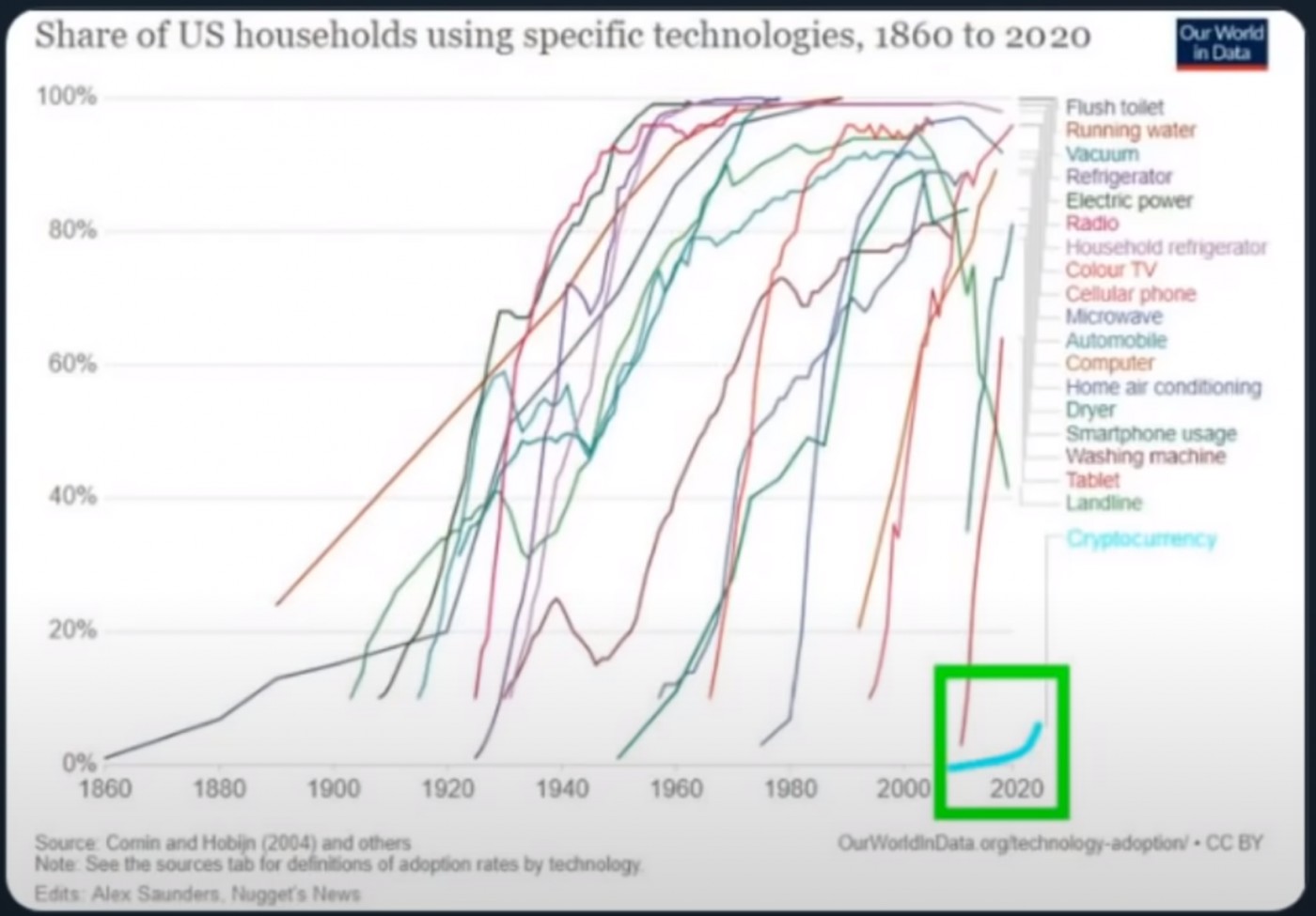 Nevertheless, a mobile tsunami is coming. Mobile devices will economically empower the masses. The Coinbase IPO propelled its app into soaring, record breaking usage. In its first week as a public company, Coinbase’s four main apps were downloaded about 2.7M times total, 2.3M of which were for its Coinbase - Buy & Sell Bitcoin app. All of its apps, except Coinbase Card, broke their lifetime records for single-day downloads and daily active users (DAU). 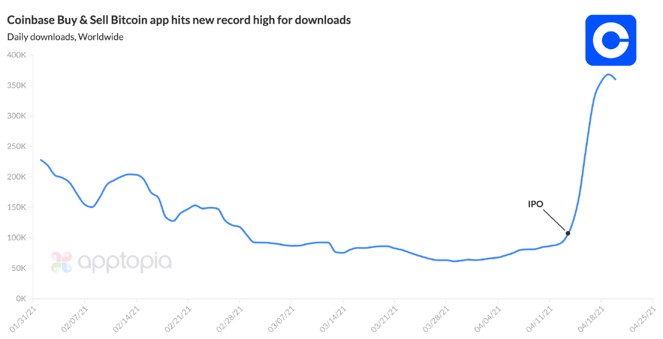 This surge of activity spurred downloads across other platforms. In fact, the Binance app was downloaded more than Coinbase. Other popular platforms such as eToro, Trust, and Crypto.com also had surges in downloads. 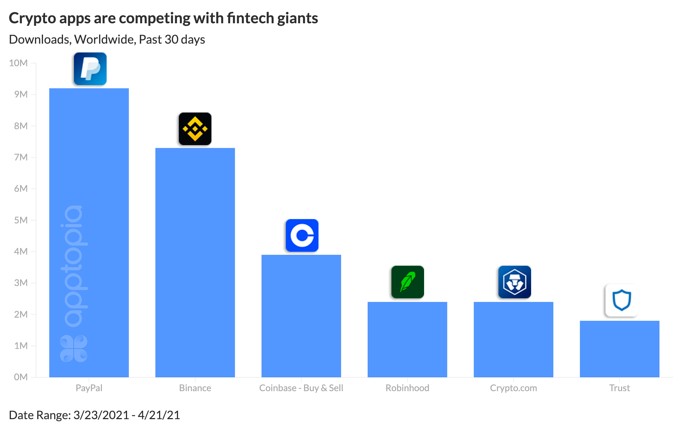 These stats imply 10M new bitcoin holders per month, and with this number accelerating each month, more than 250M by year end. Within five years, bitcoin should reach a billion people. By then, bitcoin should be well above $1,000,000 and the cryptospace should have a valuation in the tens of trillions.
Like what you read?
Let us help you make sense of these markets by signing up for our free Market Lab Reports:
This information is provided by MoKa Investors, LLC DBA Virtue of Selfish Investing (VoSI) is issued solely for informational purposes and does not constitute an offer to sell or a solicitation of an offer to buy securities. Information contained herein is based on sources which we believe to be reliable but is not guaranteed by us as being accurate and does not purport to be a complete statement or summary of available data. VoSI reports are intended to alert VoSI members to technical developments in certain securities that may or may not be actionable, only, and are not intended as recommendations. Past performance is not a guarantee, nor is it necessarily indicative, of future results. Opinions expressed herein are statements of our judgment as of the publication date and are subject to change without notice. Entities including but not limited to VoSI, its members, officers, directors, employees, customers, agents, and affiliates may have a position, long or short, in the securities referred to herein, and/or other related securities, and may increase or decrease such position or take a contra position. Additional information is available upon written request. This publication is for clients of Virtue of Selfish Investing. Reproduction without written permission is strictly prohibited and will be prosecuted to the full extent of the law. ©2021 MoKa Investors, LLC DBA Virtue of Selfish Investing. All rights reserved.
FOR OUR FREE MARKET LAB REPORT :