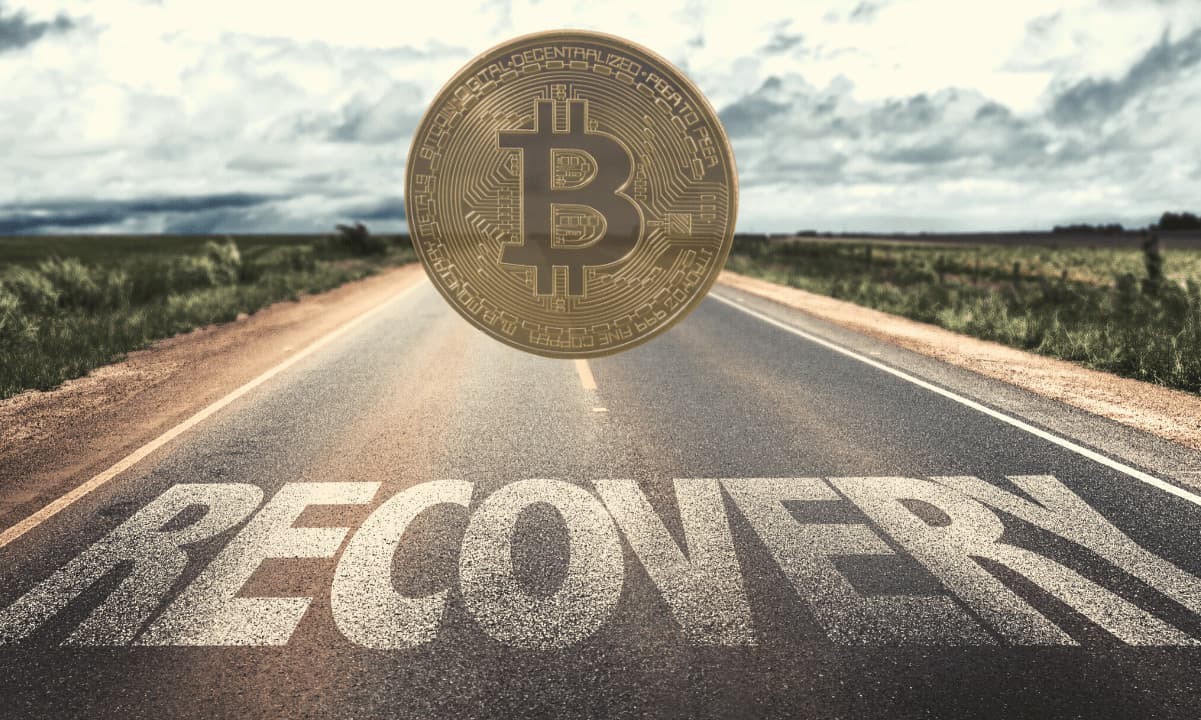 One of the major forces in the metaverse was created in 2009 known as Bitcoin in answer to all past financial crises, spurred on by what happened in 2008. Bitcoin has had numerous corrections of as great as -94% since 2010. Each time its bubble burst, it was pronounced dead by mainstream media. 99bitcoins recorded each “death” which has run into the hundreds over the years. The most recent correction has created the same broken record of mainstream media being used to spread FUD as whales can then go in and scoop up bitcoin at lower prices.

Debate on whether bitcoin reached a major low has been quelled, black swans notwithstanding, based on numerous metrics having hit major lows as they did in Mar-2020, mid-2017, and mid-2013. However, debate rages on about how bitcoin will recover. A V-shaped recovery would be similar to the post Mar-2020 recovery. A U-shaped recovery would suggest more headwinds at hand. Let's examine the metrics.

Bullish: $6 billion worth of stablecoin USDC hit exchanges. This provides buying power for buying back bitcoin. Stablecoin USDT also continues to climb. Stablecoin flows are the most bullish since March. Stablecoin capitalisation, particularly USDT, actually increased during the correction, suggesting that overall, investors were using the pullback to buy bitcoin. Furthermore, stablecoin prints have expanded dramatically creating the largest crypto-native dollar buying power on the sidelines in history.

Whale balances are also now at the same levels last seen before the crash when BTC was at $55k. They are using their stablecoins to buy back their sold bitcoins.

The majority of selling appears to have been short term holders, while long term holders appear to have bought the dip with increasing conviction.

Bearish: Nevertheless, a huge volume of short term holders remain underwater. The amount of BTC hitting exchanges still is at high levels which suggests more BTC selling pressure ahead. Whales are trying to make up their mind given the tug-o-war between stablecoins used to buy back BTC and BTC being added to exchanges. Of course, BTC could be used for other purposes such as buying ETH or in the case of futures such as on Binance or the options market, using it for those purposes, in which case it is not a bearish event. Indeed, current exchange flows show BTC and ETH moving off exchanges while USDT is moving onto exchanges. 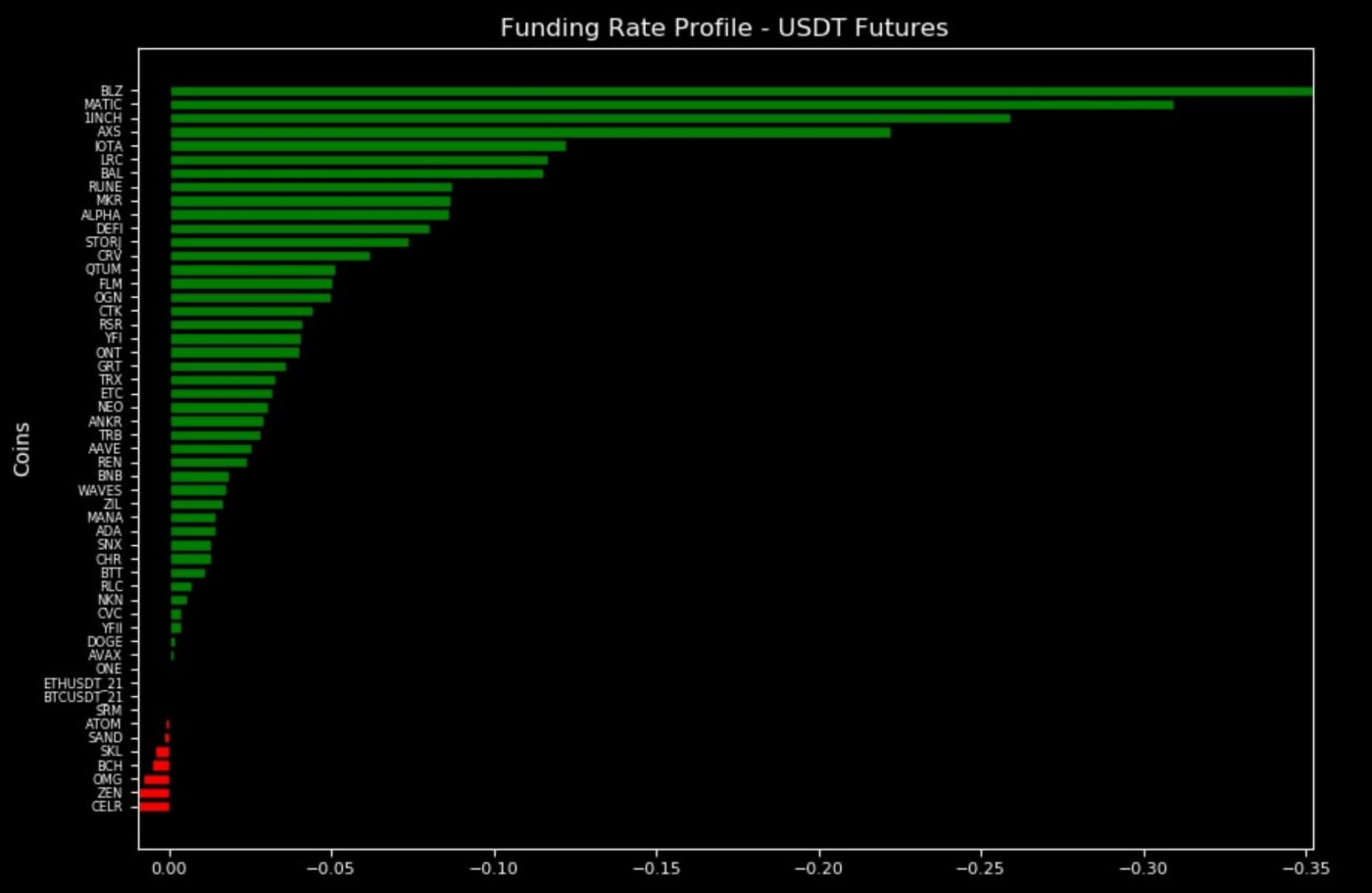 Whalemap charts show resistance at $40,000 and $42,000 but big support at $33,000. So it is possible bitcoin bounces around in this zone before breaking to the upside. The length of time it does this is predicated on the other metrics discussed here.

The Grayscale GBTC discount has risen from a peak low of -21.23% to a smaller discount of -3.8%. GBTC has sustained a discount to spot BTC prices for 3 months. Positive price momentum started on May 12, early in the current correction. There is also a large unlocking ahead. Keep in mind that GBTC correlates with BTC so odds favor GBTC having made a major low, but could back-and-fill for a time before definitively moving higher. The current price/volume action in GBTC as discussed in the recent Focus List Report should be heeded. 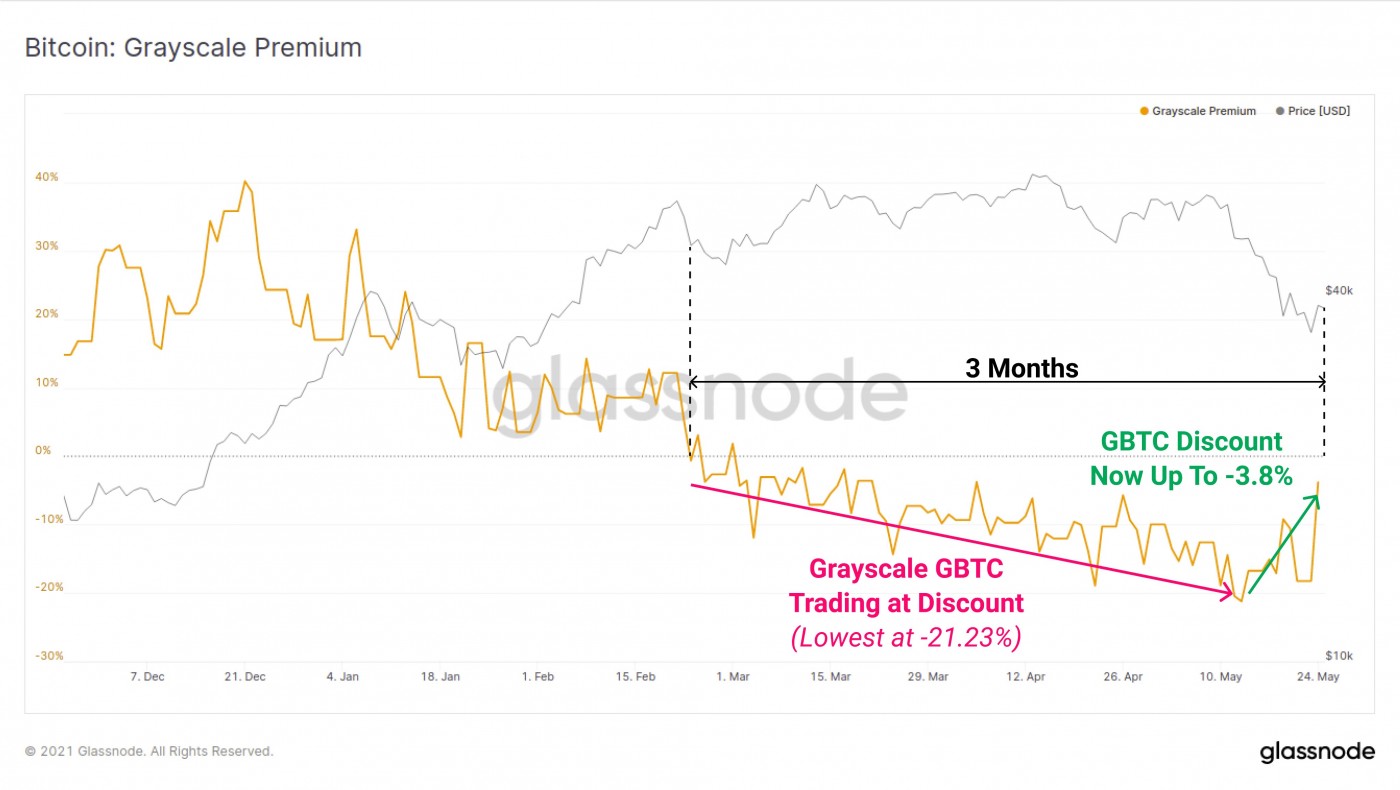 As the number of users of bitcoin continues to double every year, during this 2 week dip down to $30,000, the new user growth on the network accelerated suggesting users are taking this opportunity to enter for the first time. The number of new wallets with less than 1 BTC soared during the correction. While there are whales with over 1000 BTC, these are labeled as shrimps.

Many of the metrics look very similar in structure to the COVID white swan recovery in Mar-2020 when we had a V-shaped recovery. NVT (network value to transactions ratio) puts BTC at $55k while S2F (Stock-to-Flow) puts it at $60k if bitcoin is to continue its multiyear pattern with respect to these metrics. While odds given the above favor a V-recovery, odds are odds. This means the odds maybe around 75% for a V-recovery which still means 25% for a U-recovery. All it takes is some additional FUD or actual negative news to push bitcoin down at least for a short while. We also still have the number of short term holders sitting at losses who may act as a headwind as bitcoin wends its way back towards old highs. Still, the scarcity of bitcoin and ethereum due to various ETFs, institutional and HNWI involvement, and DeFi/NFTs in the case of ethereum, may override this as demand for bitcoins continues onwards and upwards.

Certainly over the last several years, mainstream press has been used to spread FUD to drive prices lower at critical levels. Seasoned veteran @twocommapauper on Twitter revealed how it's done with specifics on payoffs and price. It doesn't take much for a Goldman Sachs to pay off some writer to publish something negative on a major platform, then go in and buy bitcoin on the reaction selloff. Not coincidentally, Goldman did issue a report on May 24 about how bitcoin is now considered an investable asset. This helped push bitcoin higher. Market manipulation is as old as the hills.
Like what you read?
Let us help you make sense of these markets by signing up for our free Market Lab Reports:
This information is provided by MoKa Investors, LLC DBA Virtue of Selfish Investing (VoSI) is issued solely for informational purposes and does not constitute an offer to sell or a solicitation of an offer to buy securities. Information contained herein is based on sources which we believe to be reliable but is not guaranteed by us as being accurate and does not purport to be a complete statement or summary of available data. VoSI reports are intended to alert VoSI members to technical developments in certain securities that may or may not be actionable, only, and are not intended as recommendations. Past performance is not a guarantee, nor is it necessarily indicative, of future results. Opinions expressed herein are statements of our judgment as of the publication date and are subject to change without notice. Entities including but not limited to VoSI, its members, officers, directors, employees, customers, agents, and affiliates may have a position, long or short, in the securities referred to herein, and/or other related securities, and may increase or decrease such position or take a contra position. Additional information is available upon written request. This publication is for clients of Virtue of Selfish Investing. Reproduction without written permission is strictly prohibited and will be prosecuted to the full extent of the law. ©2022 MoKa Investors, LLC DBA Virtue of Selfish Investing. All rights reserved.
FOR OUR FREE MARKET LAB REPORT :