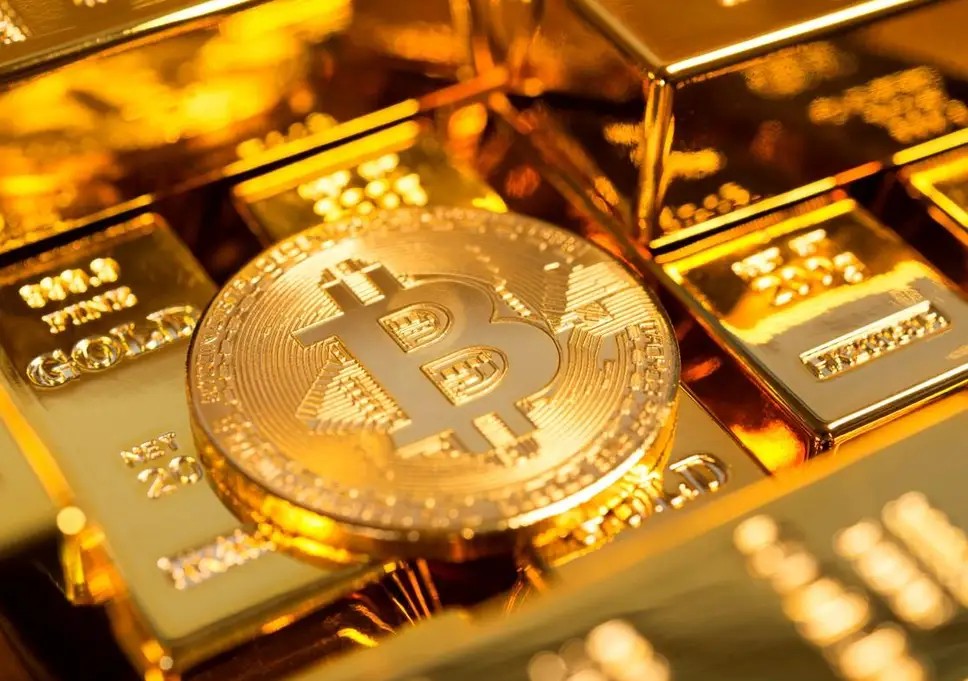 Last Friday, the 30-year Treasury bond yield broke to an all-time low on coronavirus fears and has since continued lower. Quantitative easing is the primary driver in the downtrend seen in the yield.

The coronavirus will spur central banks to lower rates even further. Most of Europe sits at negative yields. If banks can’t find a home for depositor money, it winds up in their ECB holdings and results in their being charged. Some customers are even being charged to keep their money in banks. But how much lower can rates go? Negative or not, bonds remain attractive. Investors continue to buy bonds not for the negative yields but for the speculative hope that rates will move even lower thus pushing their prices higher. 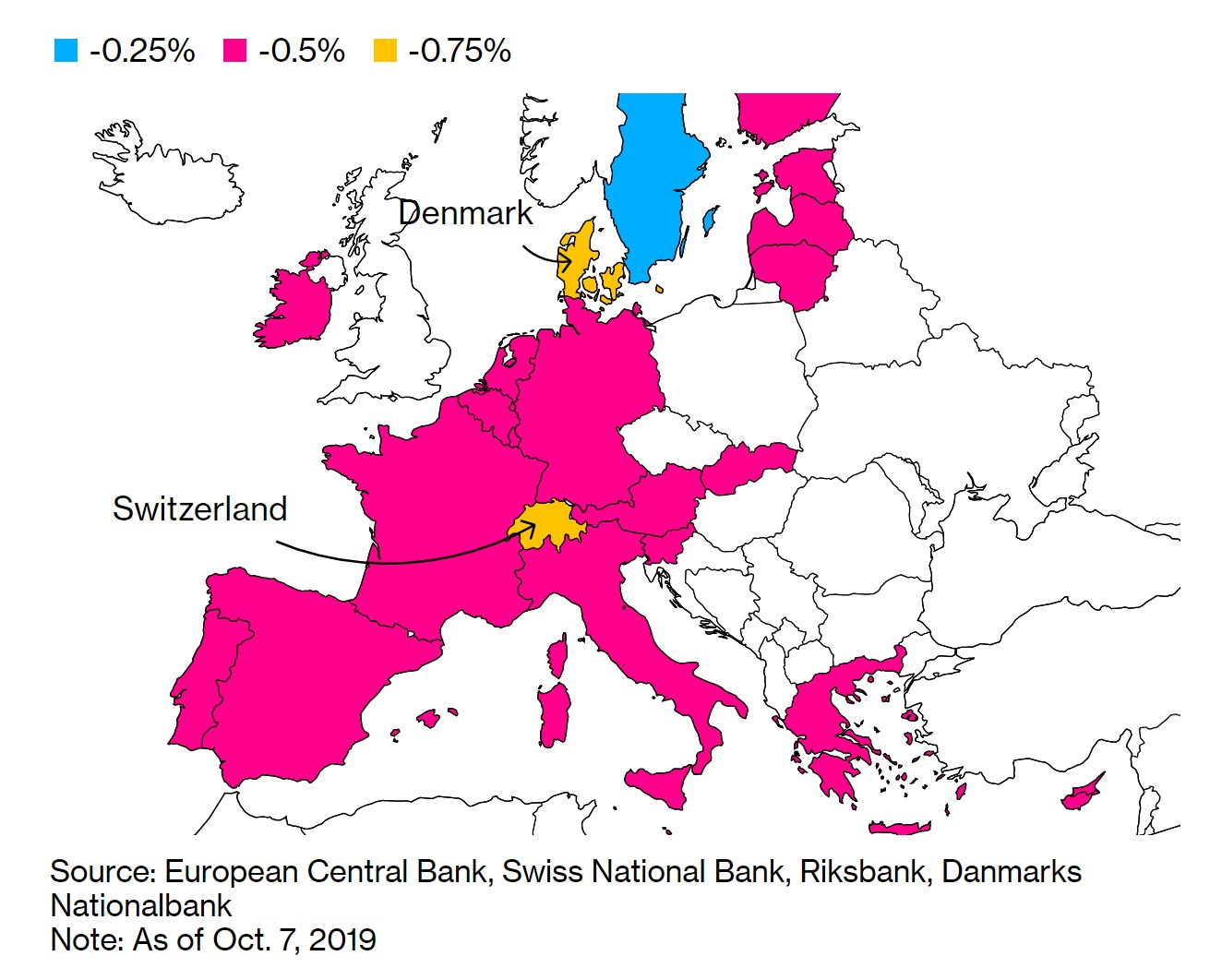 Don't Be So Negative?

Negative yields make it easier for companies and consumers to borrow, stimulating economic activity. The European Central Bank says its policies created 11 million new jobs since 2013. In the U.S., home sales have picked up as mortgage rates have fallen to 3.7%.

Denmark’s Jyske Bank offers a minus 0.5% interest mortgage while still making a profit. Customers must make monthly principal payments, but the sum they owe is whittled down month by month by the negative rate over the life of the mortgage. The bank is able to fund the mortgage by selling a bond at -0.5%, passing the rate to the customer, and making money on modest mortgage fees.

It is of historical note that the current situation where official and market rates have been below the rate of inflation have occurred before. The 1970s was one such period when inflation in the developed world ran into double digits, well below interest rates.

Nevertheless, rates have never been negative across a growing number of countries for this long. Negative rates may ultimately lead to a currency war of competitive devaluations which is ultimately bullish for precious metals and bitcoin as well as the future of digital assets which tokenize hard assets thus enable retail investors to move precious capital out of low yielding or depreciating savings accounts into such vehicles.

The legendary Ray Dalio of Bridgewater has accurately assessed “cash as trash” in this era of QE-driven currency debasement. He says the world is undergoing a major paradigm shift so asks what will be the next major investment that protects against falling fiat?

Dalio has been quoted on the following timely statements:
• “I think that the paradigm that we are in will most likely end when a) real interest rate returns are pushed so low that investors holding the debt won’t want to hold it and will start to move to something they think is better.”
• “In such a world, storing one’s money in cash and bonds will no longer be safe.”
• “It is also a good time to ask what will be the next-best currency or storehold of wealth to have when most reserve currency central bankers want to devalue their currencies in a fiat currency system.”

The Answer: Digitized securities in the form of hard assets that rise in value as fiat debases.

A tidal wave of digitized hard assets is on the horizon. The ex-CEO of NASDAQ said all stocks will be digitized in 5 years. Given that stocks are valued at around $70 trillion, this is a material transformation. We also have $228 trillion in real estate, much of which will be digitized.

In the meantime, gold continued its rise after it had recently reached 7-year highs. Gold's all-time high is $1889.70/oz. Bitcoin meanwhile continues its rough uptrend since it bottomed in Dec-2018. Bitcoin's all-time high is $19666. Both are closing in on all-time highs. The bitcoin chart is a log plot to provide greater clarity otherwise prices prior to 2017 look compressed. 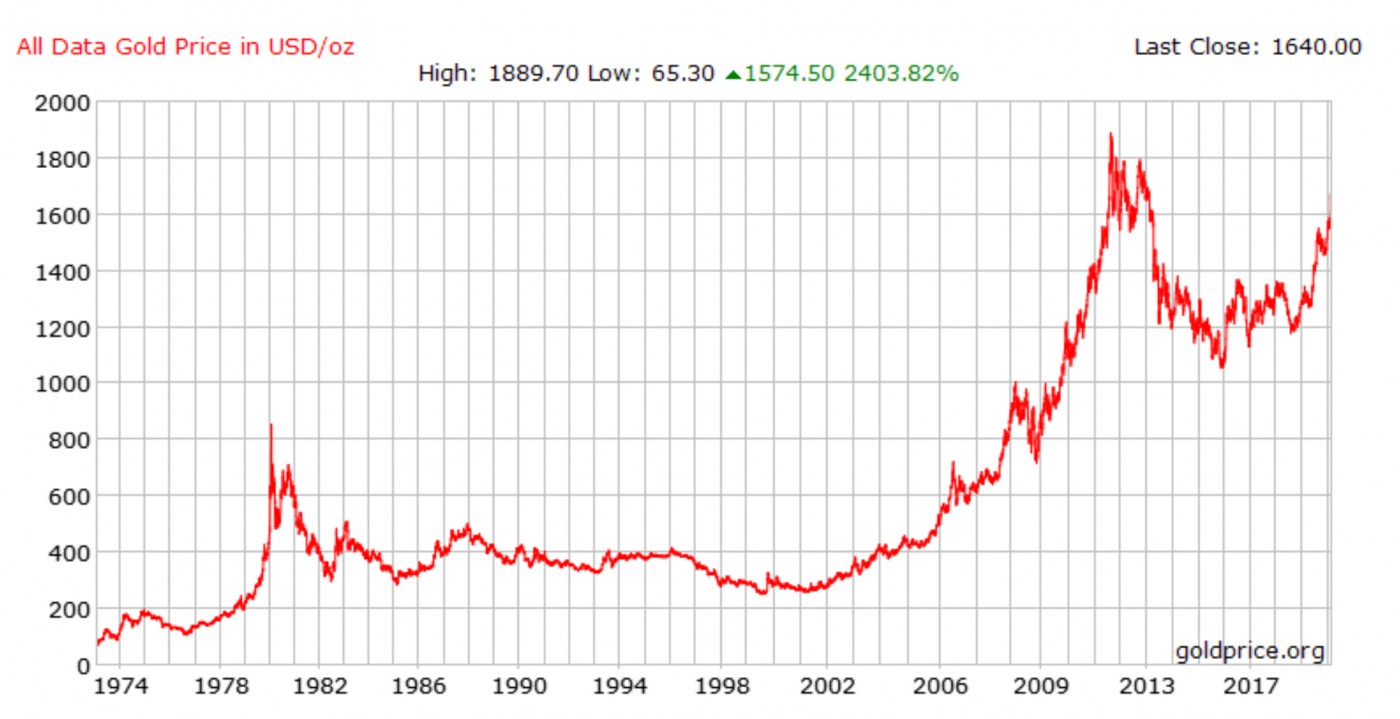 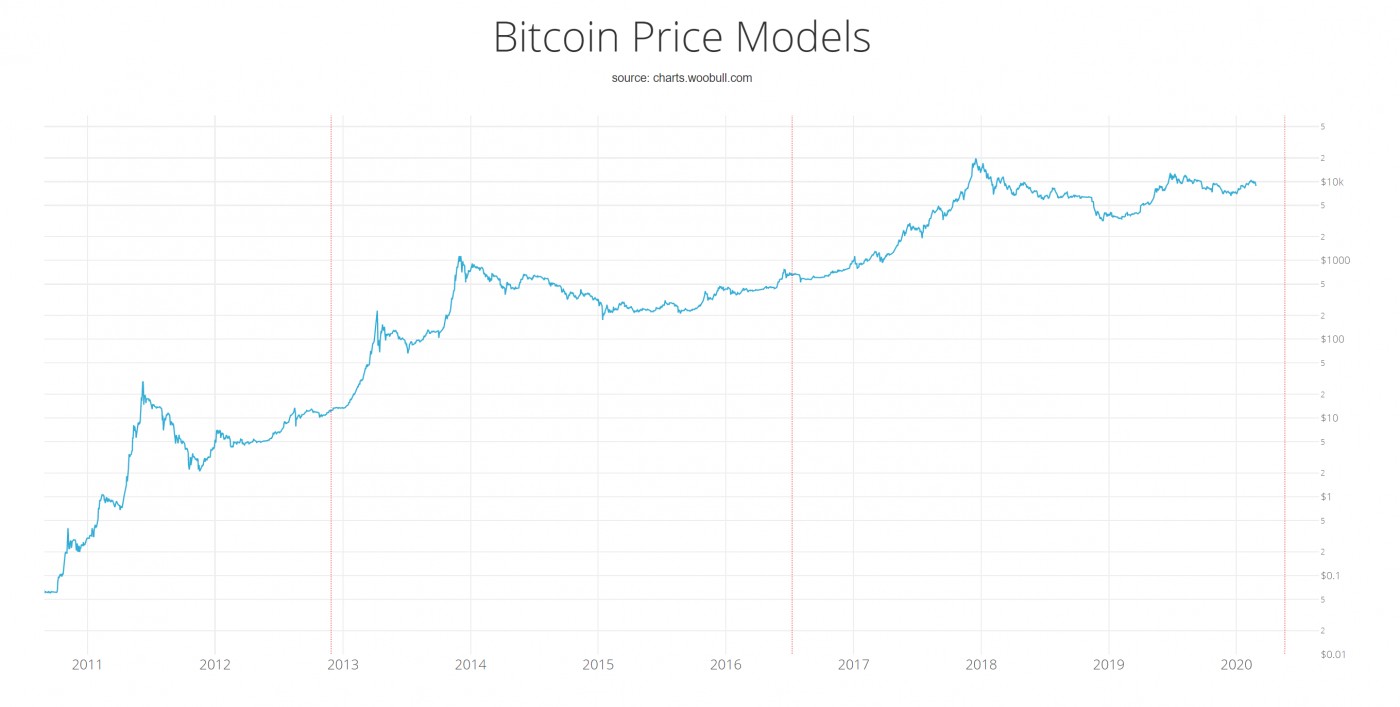 Switching back to stories gone viral, it is clear China under-reported the number of cases and deaths by a factor of at least 50:1 based on reports out of the more reliable South Korea which has shown how fast the virus can spread within its own country. 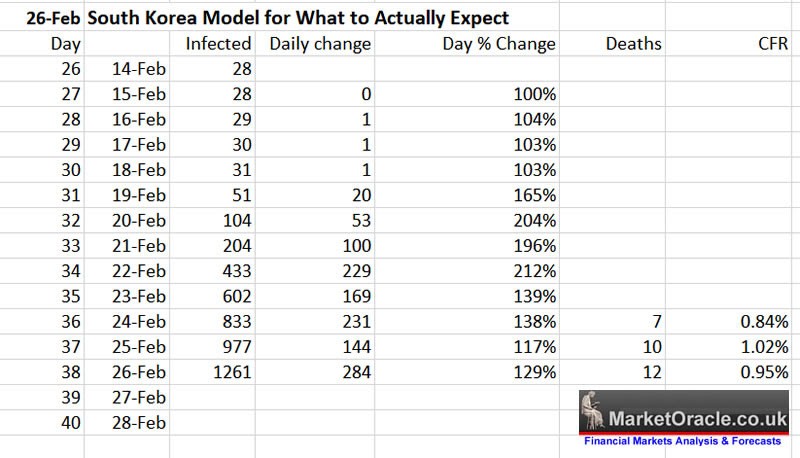 There's a lot of virulent noise right now, so let's separate the bullish from the bearish points. Favorable reports showed how: 1) some patients were brought back to full health, 2) a vaccine would be found within a few months, and 3) the number of cases in China had peaked and were now dropping.

But alarmingly accurate reports have shown: 1) at least a 50:1 under-reporting of cases by China, 2) South Korea is showing the speed at which the virus can spread, 3) the quarantining of major segments of populations with hundreds of millions in China alone, and 4) the economic consequences as a result of such population control as this has a material impact on trade, supply chains, and consumer confidence.

Nevertheless, markets are forward looking. By selling off as sharply as they have, they are attempting to discount future economic damage from the coronavirus, but this drop, in and of itself, can trigger recession as market direction typically has a material impact on the economy. That said, the U.S. market has had a few corrections of roughly -20% since QE started in late 2008 which did not induce recession since central banks always stepped in to ease monetary policy further. Major averages currently stand roughly down -14 to -16% at the time of this writing (5:22 am EST) as the majors are trading down nearly another -2% or so in premarket activity.

The question is how much further to go before markets find a major low?

As illustrated by the bullish and bearish issues, riptides abound, with the coronavirus at ground zero. The Market Direction Model has taken a longer term holding approach in this QEndless environment which has worked well. That said, it would be a historical first if markets kept jackknifing lower from all-time highs without a bounce. Given the number of cross currents, expect continued levels of high volatility. Going forward, more overall downside is possible should the number of reported cases spike higher causing greater damage to the global economy. The number of actual cases by the decently reliable South Korea is a bad omen of what's to come. The U.S. and Africa are two polar opposites which have yet to experience a full blown wave of corona. Africa is less effective at viral containment and the reporting of cases while cases in the U.S. are just starting.

On the other hand, a major floor in the markets could be found sooner than later as central banks including the U.S. Federal Reserve announce they are lowering rates further. CME Fed Futures are now pricing in a 100% chance of at least a 25 basis point (bps) rate cut at its next meeting in March, up from 41% earlier Thursday. Odds stand at 27.3% that the Fed will cut by 50 bps in March. For the April meeting, it is pricing in a 62.3% chance on a 25 bps rate cut and a 21.1% chance of a 50 bps rate cut which would bring rates down from current 150-175 bps to 75-100 bps.

Moreover, odds of rate cuts across the board from Japan to Australia have spiked. Eonia money market futures dated for the ECB's June meeting show that a 10 bps rate cut is now fully priced in. This is up from a 4 bps rate cut or roughly a 40% chance of a rate cut by June. The International Monetary Fund recently cut global growth rates as a consequence of the impact of the coronavirus on the economy.

While worst-case projections put a vaccination as long as a year off, AI is being deployed to speed up the process. A vaccine should therefore come sooner than later. Markets will put in a floor and bounce hard once light is seen at the end of the vaccination tunnel, even if it is a few months off. Indeed, the stock market will be looking for signs to discount an end to the coronavirus crisis, so will likely bounce on hopes for an early vaccine. Moreover, with QE at even fuller mast courtesy of central banks, the capital will find its way back into U.S. stocks.

Nevertheless, over the short term, the situation remains highly volatile. Stocks that resist market drops such as SBAC and CCI are worth watching for entry points once market conditions stabilize. Both stocks are focused on the 5G rollout as both own wireless towers in the U.S., Australia, and Puerto Rico. Further, the trend in exponential growth technologies with AI arguably at the forefront remains strong so watch for re-entry points in stocks such as GOOGL, FB, AMZN, and AAPL in the coming weeks.

But in the meantime, this is a market for only the most nimble of traders. The global economy remains highly leveraged in debt thus remains more susceptible to macroeconomic shocks which are being offset by QE, containment of the virus, and the AI-motivated hopes for a vaccine sooner than later. That said, it is perhaps of note that Richard Engel, the chief correspondent for NBC news tweeted, "Don’t panic. Doctors/ virologists I’m speaking to say 98% of people will be fine, even if they get Covid-19. They expect it will go around the world, but that most people who get it will be a little sick, then recover. The danger is to vulnerable people. Hospitals / old age homes."

So, as has been repeatedly said over many decades, there is nothing to fear but fear itself. If, in the final analysis, it is said the world overreacted which ended up excessively damaging the global economy pushing into deep recession due to severe quarantines, costing jobs, livelihoods, and, as a result, spurred second order health consequences unrelated to the virus, such a statement might not be an overreaction.