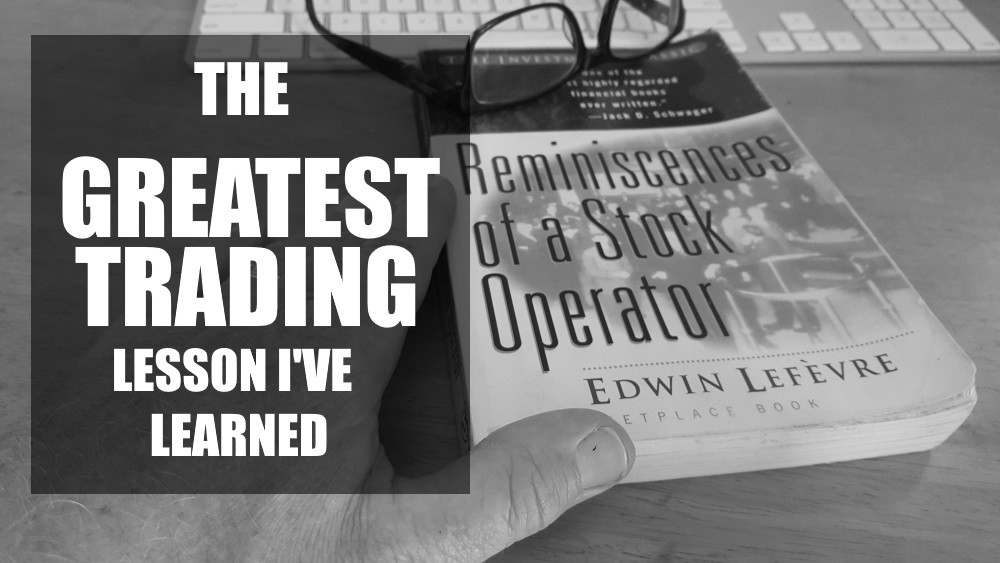 Legendary trader Jesse Livermore was known for his quotes about the stock market when it came to trading. He wrote the investment classic of classics, Reminiscences of a Stock Operator. One of his most famous quotes is, “It never was my thinking that made the big money for me. It always was my sitting. Got that? My sitting tight! It is no trick at all to be right on the market. You always find lots of early bulls in bull markets and early bears in bear markets. I’ve known many men who were right at exactly the right time, and began buying or selling stocks when prices were at the very level which should show the greatest profit. And their experience invariably matched mine–that is, they made no real money out of it. Men who can both be right and sit tight are uncommon.”

Staying on the Right Side of the Market

The key for this quote to work is that one must be in a bull market cycle. Stock markets and cryptomarkets can have massive drops during bear markets. From 2000-2002 after the dot-com bubble burst, the NASDAQ Composite fell -78%. Bitcoin itself has had two corrections of -94% since 2010. An 80-something percent correction in bitcoin is standard during bitcoin bear cycles. Yet due to its exponential price growth, it remains the leader in terms of price appreciation of any instrument in the history of speculation even if one were to examine hundreds of years of market history.

The cryptomarket remains fairly clean so my metrics have so far managed to call every major top and bottom in bitcoin since 2011, and in real-time since 2013, to within a few weeks of the major top or bottom. This means sometimes getting out at a 50% drop off the peak, but after a typical 10-fold or greater run up, you're still left with a massive gain. You would still be sitting with a 5-fold gain if you sold at a 50% drop off a peak where bitcoin had rocketed higher by 10-fold.

The price history of bitcoin shows in each bull cycle, bitcoin has gained at least 10-fold from the prior peak price. And a 50% correction is orders of magnitude better than a 90% correction. A 50% correction would need a 100% gain to get back to break even while a 90% correction would need a 900% gain to get back to break even. Logarithmic price plots therefore make far more visual sense than linear price plots when it comes to instruments that exponentially rise in price. It enables the chart eye to see corrections that might be out of the norm. Of course, despite a solid track record in terms of timing the major tops and bottoms in bitcoin, past results are no guarantee of future results since the only constant when it comes to markets is change. While the odds remain on our side, the cryptomarket will get noisier as more institutional hedge funds jump on board with their trading algorithms. But such tend to be more short term oriented to typically within days if not minutes so it should affect my own position trading to a lesser extent in both stocks and ETNs such as GBTC which tracks the price of bitcoin.

The legendary position trader William O'Neil typically used the 50- and 200-day moving averages to guide his trading which meant he was unaffected by short-term trading styles which produce significant trading volumes. While most traders like to use the 10- and 20-day moving averages as they are shorter term oriented, O'Neil's 50- and 200-day moving average sell rules kept him away from all the short term noise. He was also running a sizable sum of money so getting into and out of stocks moved the price. So keeping a longer term horizon enabled him to sit with positions longer thus trade less.

This enabled him to score major gains in stocks by sitting in the winning ones often for many months. Big gains in just a handful of stocks is responsible for his long term track record which dates back to 1958. Quality over quantity. In a bull market, he may start with several stocks, then pare the list down to the top 3 or 4 performers, so he could put all his focus on just a few names. Due to his longer holding times, this meant sometimes enduring deep corrections down to a stock's 200-day moving average. A stock he owned could easily lose 1/3 of its value before finding a major low. Price Club, Amgen, Wal Mart, and Costco were a few of many such examples.

In the current market of near limitless liquidity, we have a number of stocks that have benefited from using longer term sell rules. My 7-week rule uses the 50-day as the main selling guide, though it also can capture profits earlier using the 10-day moving average, depending on how a stock trades. Using my rule, one could have captured a good part of the gains made in technology juggernauts such as AMZN, AAPL, MSFT, TSLA, and NVDA, with AMZN carrying the best risk/reward profile of the group as I discussed in a prior report. Younger, smaller contenders that have done well using the 7-week rule which features more relaxed sell stops include Zoom Video Communications (ZM), Docusign (DOCU), Crowdstrike (CRWD), Datadog (DDOG), and Fastly (FSLY). Such stocks are greatly capitalizing on the COVID situation which is boosting video conferencing, work-from-home stocks, cloud platforms, and online collaborations in general. ZM which offers one of the most seamless platforms for video conferences has gotten support at its 50-dma all year even in March during the crash. DOCU which offers e-signature solutions enables businesses to create digitally legal documents avoiding the hassle of wet signatures held to its 20-dema. CRWD which builds software for security solutions also held to its 20-dema. FSLY which operates an edge cloud platform for customer's applications also held to its 20-dema. DDOG which provides SAAS-based monitoring for cloud applications used by enterprises has yet to violate its 10-dma. With any of these names, one might look to add on pullbacks to areas of logical support. This could come as a result of overnight negative news which causes the major averages to gap lower at the next day's open. It could also come should a stock need to digest sharp gains. Our various entry point strategies that we have illustrated in countless reports can help.

But when it comes to the stock and ETF/ETN markets, I still prefer to overweight in GBTC, buying on constructive corrections once a minor floor is found, since we are in a bitcoin bull cycle, so its potential upside is greater than most stocks. Of course, if we switch over to the cryptomarkets, then it's about finding the cryptocurrencies that will outperform bitcoin. But the risk levels exponentially jump, so if one wishes to get easier exposure to bitcoin, the blue chip of cryptos that carries far less volatility than many other cryptos and remains the coin to beat over a complete bull and bear cycle, GBTC is a convenient and safe way to buy bitcoin on a major exchange.

Some have asked why bitcoin is having trouble breaking above 10,000. There are four reasons for this:

1) There are short term sellers there right now, probably scalping some profits, whenever the price of bitcoin rises above 10,000.
2) There's also the miners selling their reserves due to the halving. Some of these miners are weak so will go out of business, leaving the stronger miners. Once the weaker miners have been weeded out, this form of selling will come to an end. This can be where bitcoin finds a minor low in this major bull bitcoin rally and starts back towards old highs.
3) There's also the exchanges who consistently sell their bitcoin profits onto the market. Since exchanges are growing in trading volumes, there is an increased flow of bitcoin being sold onto the market by the exchanges.
4) Finally, the bitcoin market is relatively quiet right now so such selling pressure from miners and exchanges can more easily push the price of bitcoin higher or lower.
Ultimately, we should see bitcoin clear the $10,000 level. Just as with stocks that keep testing a major moving average, often after a few knocks, the door opens. With limitless liquidity out to at least the year 2022, bitcoin should not just reach old highs of around $20,000 but start on a major bull run as it has always done after reaching new highs in prior bull cycles.