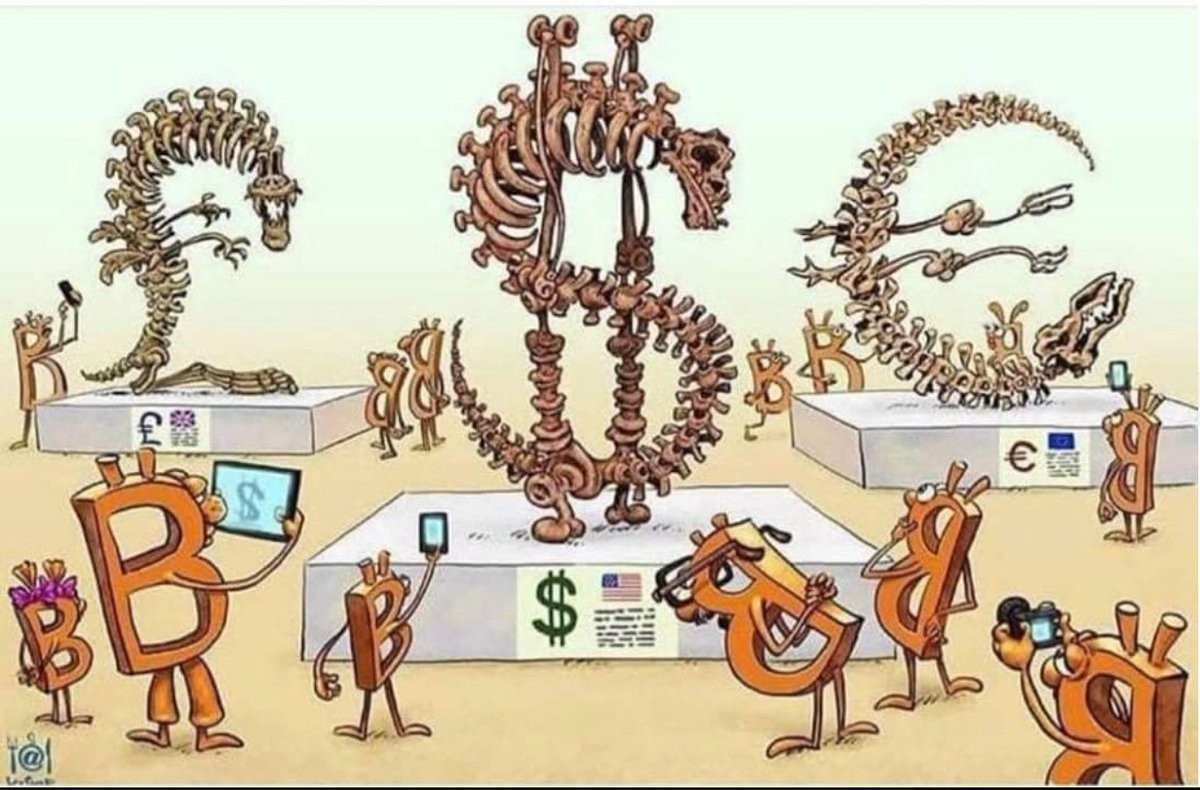 Land of the Free?

In America you can buy a home you can't afford w/ 20x leverage, rack up credit card debt at 20% interest in a zero interest environment, and borrow $200k non-dischargeable loans for liberal arts degrees.

Meanwhile, you can't buy a bitcoin ETF or invest in startups without a net worth of $1 M which is hard when you have a mortgage, credit card debt,  and student loans. You also get stuck in various alt coins because exchanges won't honor trades to U.S. citizens or get denied making money because most of the alt coins that do well are not offered to U.S. citizens. This is all done for the safety and security of Americans.

Fiat the Dinosaur vs. Stablecoins

As of November of this year, the central bank balance sheet stands at close to $8 trillion due to the explosion of debt. Meanwhile, negative yielding global debt is at all-time highs (ATH) at close to $18 trillion. This is having a material impact on fiat which is or could hyperinflate as it gets printed to death. Meanwhile, no one is allowed to move any sizeable amount of fiat cross border. Proposed legislation will prevent any amount over $3000 from moving within blockchain networks without KYC/AML. Such regulation could corrupt a brilliant technology. It is akin to passing a law saying anything you want to spend more than $3000 in cash on anything, you have to AML/KYC. This is all in the name of protecting people against terrorism and money laundering, terms which governments have weaponized to pass rights crippling laws. Meanwhile, criminals who want to get around such regulations can easily do so. So the people are once again made to pay the price.

Stablecoin Tether (USDT) might only be partially backed by dollars, but it's the oil in the financial crypto engine because you can easily move value around. As many individuals and businesses have found, they dont have to do KYC every step of the way which is often every 3 months because the documents need to be less than 3 months old, often leading to temporarily frozen business accounts.

So the threat to the U.S. taking down Tether is very real as it would represent another major speed bump to the blockchain space. But blockchain is no stranger to such actions. Over the years, it has become increasingly anti-fragile. And with so many top minds having migrated into blockchain, solutions are being proposed as to how to deal with such eventualities should they come to pass.

So while blockchain valuations are around half a trillion dollars, the room for growth is beyond massive. Compare this to other global markets. The global government bond market is over $120 T(rillion). Total global debt market stands at $260 T. Global custody (pensions, fund managers) is over $20 T. The settlements layer (transactions) is over $4 Q(uadrillion). The derivatives layer is $1.2 Q. Equities traded per annum are $70 T. FX (currency exchange) market transactions per annum is $1.7 Q. https://www.visualcapitalist.com/all-of-the-worlds-money-and-markets-in-one-visualization-2020/

Bitcoin, ethereum, and alt coins, while growing exponentially, still remain a tiny grain of sand by comparison. This will change as value will accrue to the blockchain space which provides superior protocols hugely reducing fees, eliminating middlemen and trust, and skyrocketing efficiencies. Ultimately, economics wins the day in the end.

We can now tokenize nearly anything of value from real estate to IP to fixed assets to securities to rare works of art. ETH will be the big beneficiary here. ETH will also benefit from improving the efficiencies of global supply chains. Meanwhile, both BTC and ETH will benefit from global custody, settlements, and derivatives.

Both BTC and ETH have the network effect so value may accrue to both at the expense of other blockchain protocols. BTC is the perfect store of value layer but ETH is the perfect layer on which trust and exchange of value is built. We now have the building blocks needed to power a fully decentralized and algorithmic financial system, commonly referred to as DeFi.

While BTC as the store-of-value is not contested, some say the ETH network architecturally may not meet the needs forever such that "winner take all" is unlikely in these other areas. But the network effect is one of the most powerful effects and both BTC and ETH have achieved this. So while big companies often create their own network environments, the ETH network is likely to remain in pole position, while the smaller networks will co-exist with the ETH network.

So much is converging due to blockchain which serves as the backbone. We have money, gaming, social networks, legal, supply chains, and intellectual property all converging. Bitcoin is the base layer protocol which is the ultimate foundational store-of-value, then you have ethereum which is the world's largest economic sandbox where companies can create DeFi, virtual worlds, games, NFT (non-fungible tokens) collectibles, DAOs (decentralized autonomous organizations), and legal. All of this is accelerated by COVID, virtualization, and social distancing.

Everyone can use the Ethereum infrastructure without having to depend on a centralized party. Recent events that spur this evolution include the elections and Twitter censorship along with Apple and Google being dragged in front of Congress for abusing data. So much is ripe for disruption. Enter decentralized platforms. As a consequence, cryptofunds exposed to the right alt coins have an upside that is orders of magnitude greater than any equity fund.

A massive transformation of wealth is coming. Are you ready to surf the tsunami?

In the meantime, for those who dont own bitcoin or ethereum directly from crypto exchanges, GBTC and ETHE offer the best risk/reward relative to most all stocks though keep in mind the premiums associated with both of these Grayscale ETNs could vanish once the SEC allows a bitcoin ETF to list. We will likely get ample warning of such an ETF as well as observe negative price action in both relative to actual bitcoin and ethereum.

At present, the premium of GBTC is elevated at nearly 30%. Historically it tends to trade at premiums below 15%. That said, in bull markets such as the present one, GBTC can become more and more overvalued relative to the price of bitcoin itself, so investors can benefit from this. As always, I will apprise members of any major tops based on my metrics. Such a major top comes only every couple of years. 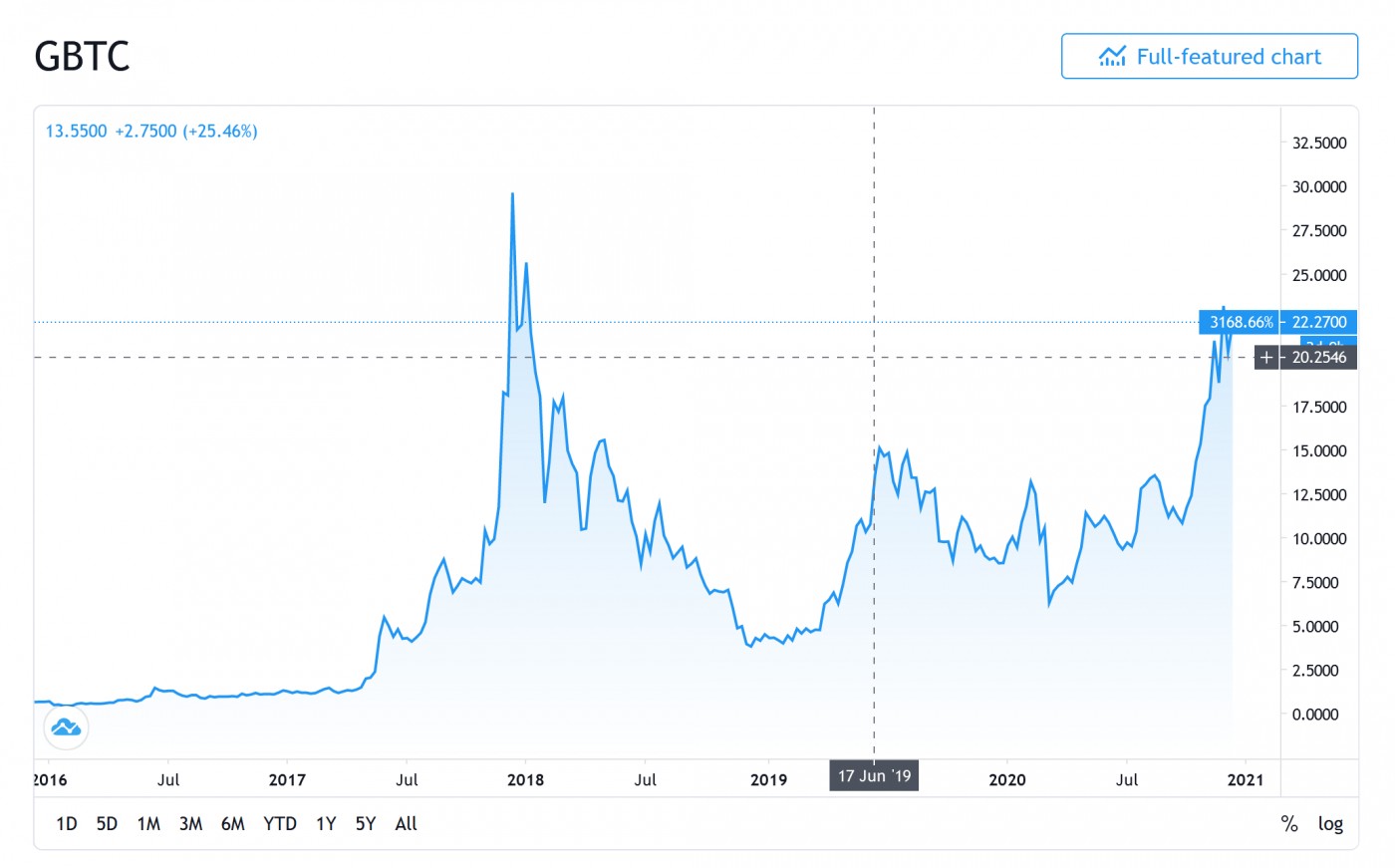 The premium of ETHE stands below 200% as of this writing. Historically it can trade at premiums well above 200% for months on end so is not yet overvalued by this historical measure. 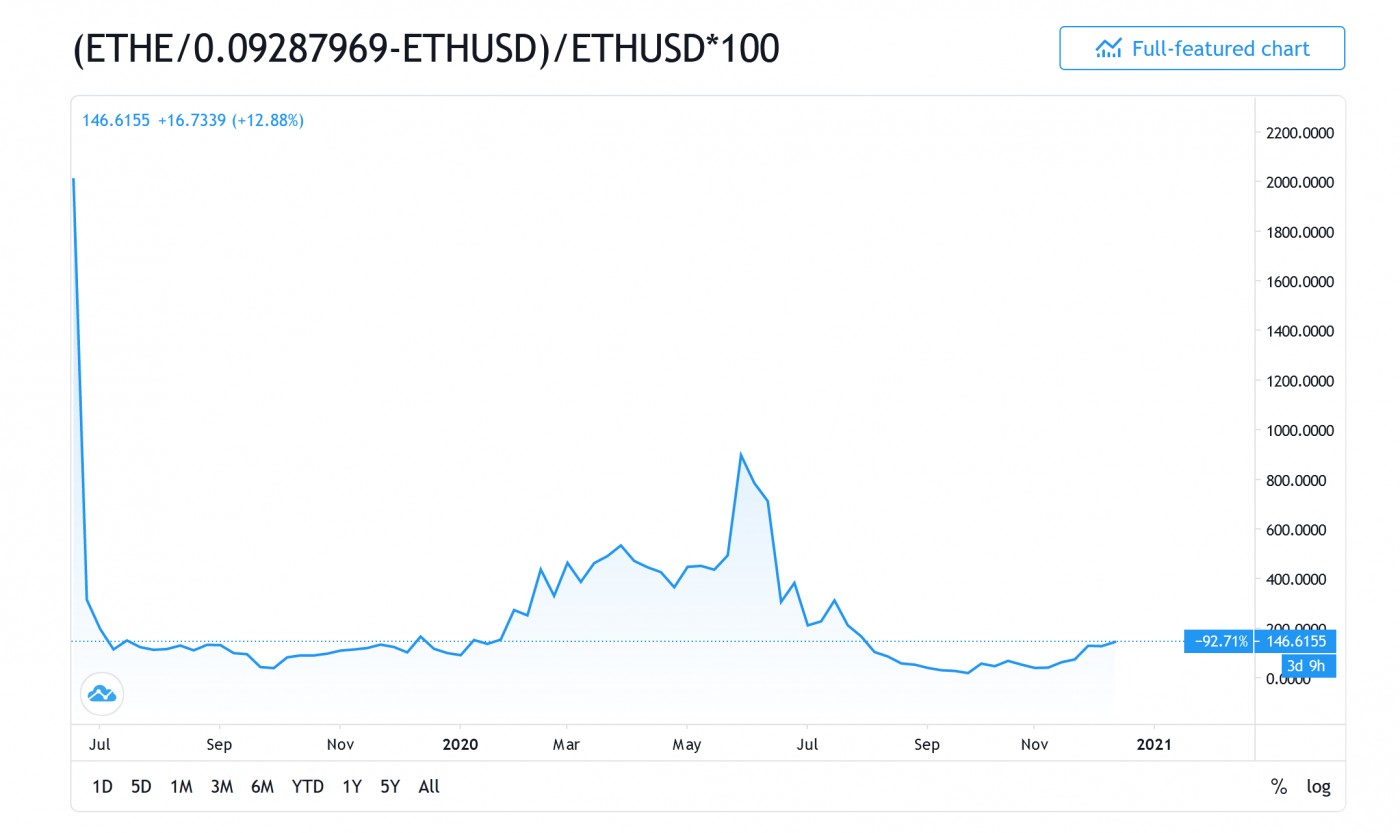 ETH is also looking to outperform BTC if history is any guide. When bitcoin breaks to new highs, ethereum tends to outperform bitcoin though it can take a couple of weeks for this to occur, thus in the graph below, a break below the recent consolidation could occur, but this would only set ETH up for a bigger move. Both have strong fundamentals so having exposure to both is prudent, but overweighting the faster moving ETHE might be within your risk tolerance levels, thus moving part of your capital out of GBTC and into ETHE may not be a bad idea. ETHE also just split 9:1, a move which could be seen as bullish since ETHE is still early in its run. 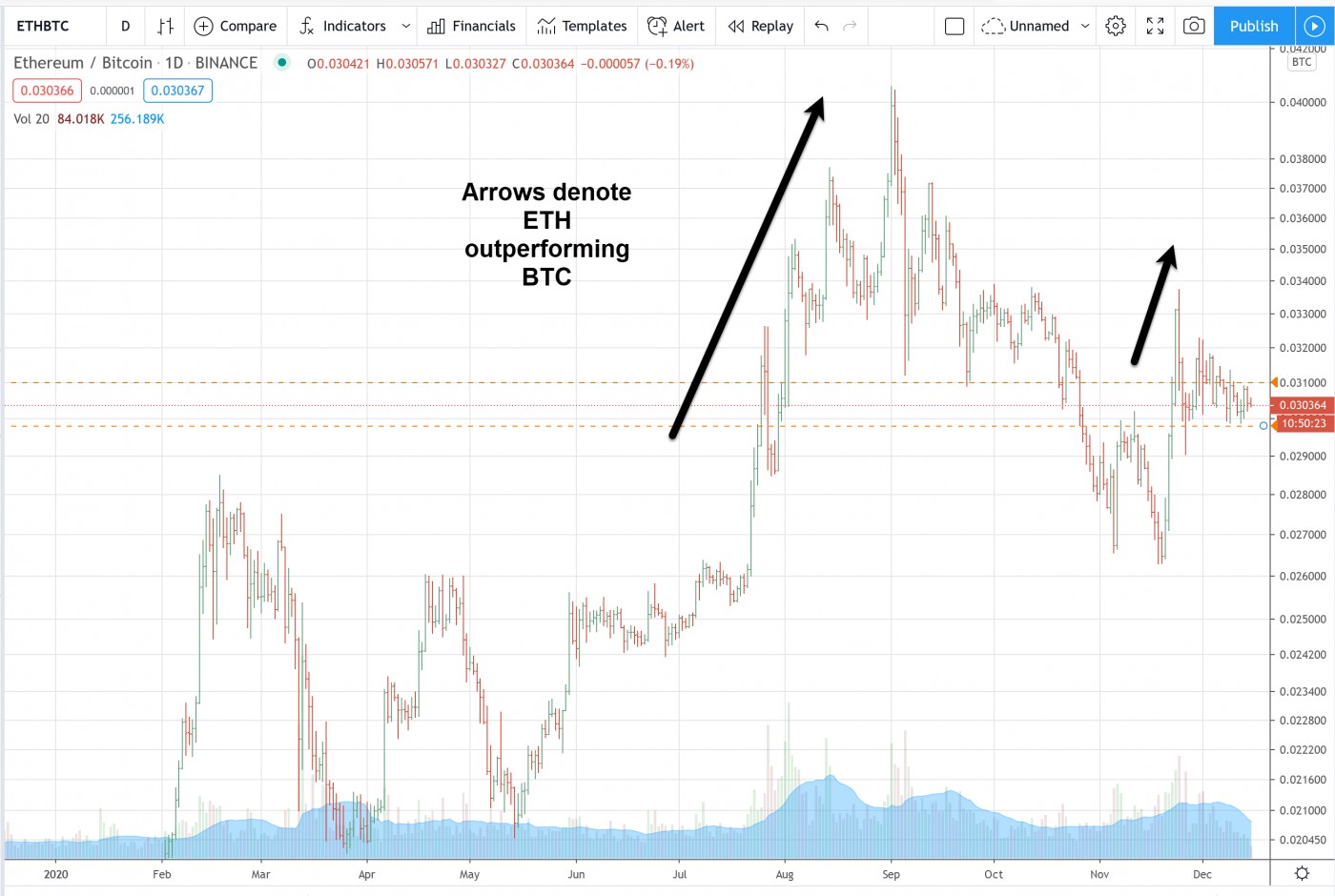