1. How do you trade a bubble to keep big gains as mentioned in your books such as "How we made 18000% in the Stock Market"?

I have studied bubbles going back hundreds of years. The data is sometimes surprisingly available on price/volume action of various instruments including real estate such as in the Florida land boom of the early 19th century, various commodities, and old publications including the Magazine of Wall Street which Richard Wyckoff was the editor. Every bubble rhymes, though does not repeat. You get a climax top in various instruments whether they be stocks, bonds, commodities, real estate, or bitcoin and cryptocurrencies. The percentages are always relative to prior percentage gains, thus a logarithmic chart is key as one can then not let visuals from linear plots distort their analysis. I see this in cryptocurrencies all the time. A coin may run up 10-fold in a short time, so a 50% correction is normal. It does not necessarily indicate the move is over. A stock, on the other hand, typically takes many months if not years longer to achieve a 10-fold move.

After a relatively big rise in price over a period of time, the move will accelerate. The trading volume may spike to all-time highs. In the case of Silver's ETF SLV in 2011, it was a textbook climax top where SLV shot higher in a hurry, recording the largest up volume day since its run started months prior, then a few days later, two days off the top, it had its largest volume down day since the run started months prior. I sold half the position near the open as SLV had gapped lower, then the rest later in the day once it was clear downside volume was at record levels.

Often, volatility increases greatly near the top such as in SPCE which traded sloppy for 5 days before breaking down. At the latest, you could set your stop just below the low of the noise. 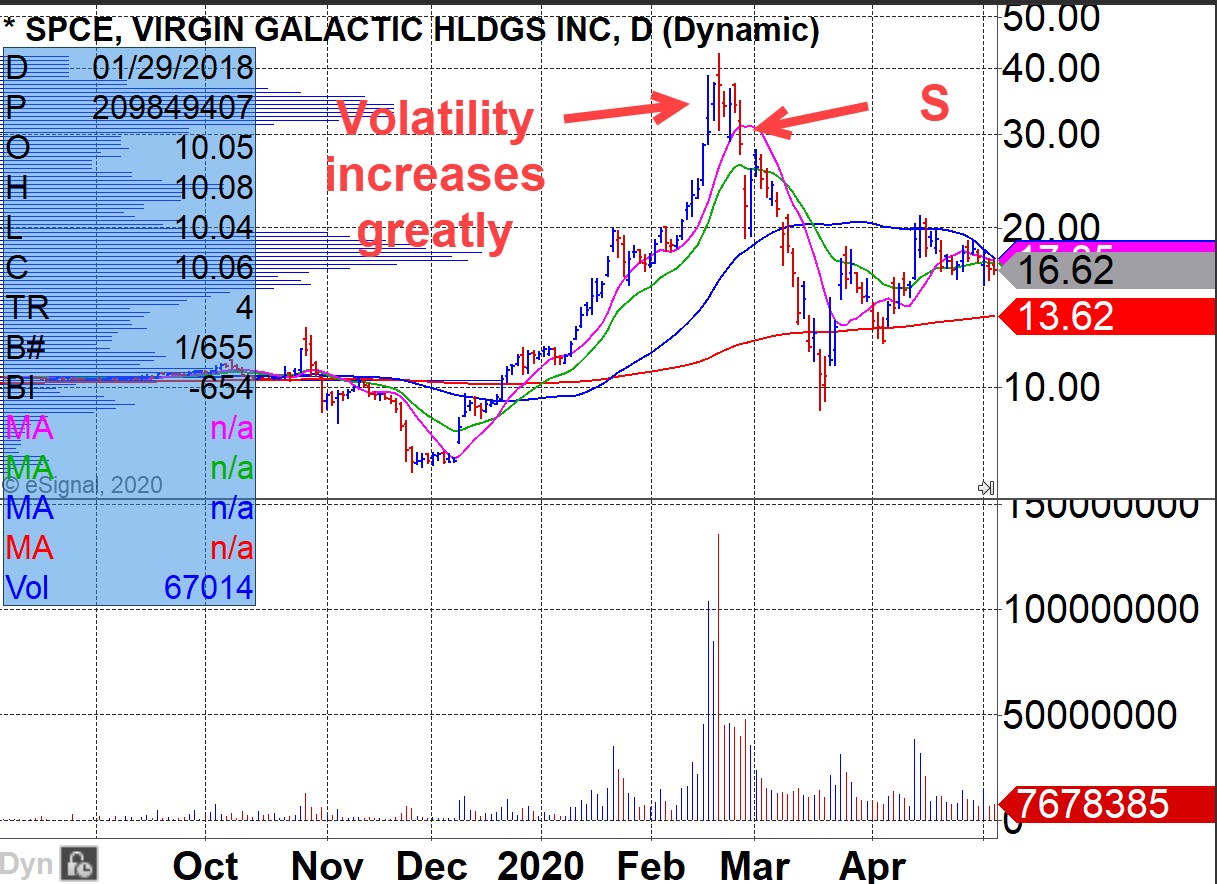 The other way I sometimes play climax tops is to wait for the initial correction which can be steep. A stock that doubles in price in a few days may easily correct 1/3 off its peak. It will then typically bounce, retracing at least one half of its drop. If volume looks weak on the bounce, I typically will exit the position at this stage. Note, using moving averages as indicators will usually give back too much profit, though if you didn't sell soon enough after the peak, they can be used at least as a guide to exit and take some profits.

2. How do you find great short sale setups when and after the bubbles burst?

The last example given where I exit on a weak bounce after a climax top can also serve as a possible short entry point. Keep in mind that volatility is usually quite elevated so either keep your stops tight or use smaller positions so you can prevent yourself from getting stopped out prematurely. As the bear market wears on, stocks will have dead cat bounces which can be shorted into at areas of resistance. We discuss this in full in our book on short selling as well as in some of the articles on this site.

We discuss this in our books and in some of the articles on this site. In brief, it is key to understand the market environment. The longer, smooth uptrends of the 1990s are different from today's QE-drive choppier uptrends, often only supported by a handful of names. One must also determine their personal risk tolerance levels. Market environment and risk tolerance levels will determine one's sell stops, position sizing strategies, and an approximate range of stocks in one's portfolio. The factors can vary greatly depending on the environment.

Prior to QE, I used to typically hold 12 to 18 names in my portfolio. I would enter in at a 25% position, then cut it in half if it was the slower animal in the portfolio pack, pushing the capital into a new name. While I aimed to have under a dozen names, I typically would be holding well over a dozen stocks while not sacrificing upside. In other words, I wanted my capital to be spread across the fastest race horses out there. In a strong bull prior to QE, there were plenty of stocks to buy into that enabled me to achieve triple digit percentage gains for 6 years in a row while greatly reducing risk due to the number of names in my portfolio. That said, I was also aware of cluster risk. For example, I remember in mid-April 1999, I was already up well over 200% because I was concentrated in internet names. Many seems to have climax tops into mid-April, then either got unusually volatile or exhibited unusually high volumes. I remember a few minutes after the open on April 14, internet names started to slide on volume, so I sold most of my stocks, reducing my long exposure from 200% down to about 20%. Had I waited til later that day to sell, I would have given back an additional 10-15% in profit since I came into that day on full margin.

In today's QE-driven markets, I tend to focus on fewer names than I had in the past. I hold longer term positions in gold-related ETFs, bitcoin's ETN GBTC, silver-related ETFs, as well as big tech where companies such as AMZN, AAPL, and FB will benefit from their enormous R&D war chests as they invest heavily in AI, blockchain, VR, and other bleeding edge technologies. There are also the companies that are benefiting from the post-COVID environment which include companies such as LVGO for healthcare and LULU for the WFH revolution where at-home exercise is becoming a standard.
FOR OUR FREE MARKET LAB REPORT :