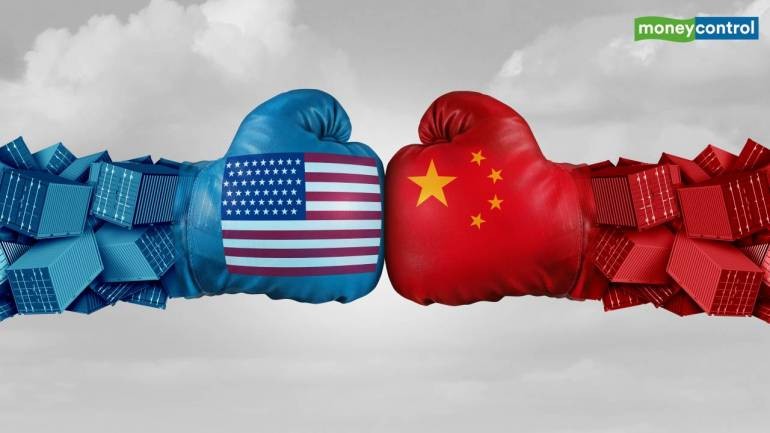 The trade war accelerates then decelerates then accelerates again, much like a stock in a downtrend that backs and fills before going lower. On Thursday, a spokesman for China’s commerce ministry said China would not immediately respond to the latest tariffs imposed on them which sent U.S. markets higher.

Ministry of Commerce spokesman Gao Feng said at a press conference that “the question that should be discussed now is about removing the new tariffs to prevent escalation.” Last week, Beijing imposed new tariffs on $75 billion of U.S. goods which prompted a retaliation by the U.S. which imposed an additional 5% levy on Chinese goods. “Escalation of the trade war won’t benefit China, nor the U.S., nor the world,” Gao was quoted as saying. Nevertheless, Trump is going to play a hard game here as he knows he can force the Fed to lower rates, making any agreement between the two nations less likely, at least for a number of months.

Indeed, on Sunday, China and the United States began imposing additional tariffs on each other's goods, the latest escalation in a bruising trade war. Since Thursday's calming words out of China, it certainly did not take long to reverse what was said and instead escalate. Trump on Twitter wrote his goal was to reduce U.S. reliance on China and again urged American companies to find alternate suppliers outside China. A new round of tariffs took effect from 0401 GMT, with Beijing's levy of 5% on U.S. crude marking the first time the fuel has been targeted since the world's two largest economies started their trade war more than a year ago. Meanwhile, the Trump administration began collecting 15% tariffs on more than $125 billion in Chinese imports, including smart speakers, Bluetooth headphones and many types of footwear.

Whether the debt bubble blows apart today or down the road, either way, hard assets such as real estate as well as bitcoin, gold, and silver will all continue to benefit. As rates go lower and debt piles up, the first time the Federal Reserve hikes rates may be the pin that blows the bubble apart. From 1933-1936, rates were at 0%. The Fed then hiked rates which sent the Dow Industrials down about -50% over the next several months. The fierce macroeconomic instability together with skyrocketing populism pushed the planet into World War II. As shown in a chart I will include [the chart below], from 1942 to 1945, the economy and the markets were classically war-driven as governments around the world both borrowed heavily by printing significant sums of money. This was stimulative to employment, particularly when it came to any war-related job. The stock market consequently rallied from 1942-1945.

Interest rates remained at 0% until 1942 when they were only slightly raised then kept near record low levels from 1942-1948. The U.S. being the victor was able to pay down its massive debt in the ensuing years that it had generated during the war as a period of high growth for the U.S. occurred over the next decade.

This begs the question whether we will see a major military war between the two superpowers, the U.S. and China since today's world rhymes a bit with pre-World War II times. Populism is at record levels. Debt as well. Major wars are economic in nature thus a major trade war could turn military at some point.

a) The trade war escalates further dampening global growth which spurs central banks to continue to print. This causes a major devaluation of the U.S. dollar among other fiat currencies. The price of hard assets shoot higher as more fiat would be required to buy real estate, stocks, bitcoin, precious metals, and collectibles.

c) The trade war ceases which helps growth but only to where growth was before the trade war began. Trump's pro-business policies together with exponentially growing technologies are insufficient to help the U.S. reduce its debt. The Federal Reserve has no choice but to continue to lower rates. This causes a major devaluation of the U.S. dollar among other fiat currencies. The price of hard assets shoot higher as more fiat would be required to buy real estate, stocks, bitcoin, precious metals, and collectibles.

d) The trade war turns into a military war. Huge levels of debt are required to finance the war. This causes a major devaluation of the U.S. dollar among other fiat currencies. Perhaps after the devaluation, the victor would be able to pay down its debt much as the U.S. did after World War II. Nevertheless, the price of hard assets would shoot higher after the devaluation as more fiat would be required to buy real estate, stocks, bitcoin, precious metals, and collectibles.

Bitcoin's Superior Risk/Reward: So in all four scenarios, hard assets benefit as well as bitcoin but based on historical price trajectories, bitcoin by far stands the tallest.

Keep in mind that bitcoin typically corrects between -28% to -42% during bitcoin bull markets and far greater during bear markets. That said, we are firmly in a bitcoin bull market which should continue until bitcoin has a massive upside move of typically 10-fold or greater as it has done each time since its creation in 2009. Stocks can also suffer material losses. Prior to the U.S. entering the war in 1942 suffered as the Dow lost -41.7% between 1939 and early 1942 as shown below. But this was due to the major world war that began in 1939. In today's world, should a major war begin, it would most likely involve the U.S. and China thus the amount of capital required to finance such an undertaking would, once again, benefit hard assets including stocks.

That said, such an escalation of the trade war, regardless of whether it turned into a military war, would dampen growth thus would put much pressure on stocks. But QEndless would create the safety net, thus it is likely that this big stock market bull run that began in 2009 will continue albeit with sharp corrections along the way as we have observed a number of -20% corrections in the major averages over the last decade. Always keep your stops tight.
Like what you read?
Let us help you make sense of these markets by signing up for our free Market Lab Reports:
This information is provided by MoKa Investors, LLC DBA Virtue of Selfish Investing (VoSI) is issued solely for informational purposes and does not constitute an offer to sell or a solicitation of an offer to buy securities. Information contained herein is based on sources which we believe to be reliable but is not guaranteed by us as being accurate and does not purport to be a complete statement or summary of available data. VoSI reports are intended to alert VoSI members to technical developments in certain securities that may or may not be actionable, only, and are not intended as recommendations. Past performance is not a guarantee, nor is it necessarily indicative, of future results. Opinions expressed herein are statements of our judgment as of the publication date and are subject to change without notice. Entities including but not limited to VoSI, its members, officers, directors, employees, customers, agents, and affiliates may have a position, long or short, in the securities referred to herein, and/or other related securities, and may increase or decrease such position or take a contra position. Additional information is available upon written request. This publication is for clients of Virtue of Selfish Investing. Reproduction without written permission is strictly prohibited and will be prosecuted to the full extent of the law. ©2023 MoKa Investors, LLC DBA Virtue of Selfish Investing. All rights reserved.
FOR OUR FREE MARKET LAB REPORT :