Major averages closed near intraday highs on higher volume as they are well above their respective 10-day moving averages. With earnings season upon us, another pullback could be expected to allow the moving averages to catch up. With QE still a mighty force as stocks are the new bonds, capital generated from the selling of bonds is liable to find its way into stocks. In addition, the continued decline in the U.S. dollar, which drove to three-year lows this past week, may provide an additional impetus for stocks. Any pullback, therefore, could be brief as has been the rhythm of the stock market.

Meanwhile, the U.S. Federal Reserve has been shrinking its balance sheet. Other central banks have indicated as much such as most recently, the Bank of Japan. The question is whether such moves eventually add up to anything material or are cut short by a faltering economy. With onerous and unprecedented levels of debt, the great unwind may never fully manifest should economic growth falter, forcing the Fed's hand to halt the tightening of money. Rates are still near historic lows so the tightrope central banks are attempting to walk leaves little headroom for error. To complicate matters, some Fed members are concerned rates may not tighten quickly enough thus are calling for four, not three, rate hikes in 2018.

Meanwhile, talk about the potential of an inverted yield curve has been spurred by the narrowing yield spread between 2- and 10-year U.S. Treasury yields as shown in the chart below. The point at which the yield in the 2-year exceeds the yield in the 10-day are noted by the red hash marks. The gray bars show recessionary periods of economic contraction.

While inverted yield curves do have a reliable track record of ending bull markets, the start of a bear market signaled by recession can come one to two years after the inversion, thus in terms of timing your buys and sells, watching your stocks remains key as always.

Futures are up soundly as the perception of an expanding U.S. economy, growth in corporate profits, and enthusiasm over the Trump administration’s tax cuts help spur the rally. With stocks as the new bonds given the still-meaningful flow of QE, stocks still have a strong tailwind for now.

Dr. K's Crypto-Corner
by Dr. Chris Kacher
Cryptotechnologies...Kryptonite for Governments™
Today, the director of Germany's central bank said that cryptocurrencies should be regulated through an international rather than national set of rules. Meanwhile, South Korea has attempted to ban bitcoin which caused citizens to flood petition signatures to the President while social media contained tidal waves of angry comments demanding the offending minister’s sacking. Reports say the pressure grew so intense, agencies within the same government began contradicting one another, ending with an official presidential announcement no “ban” was forthcoming. Over in China, the government continues its ban on cryptocurrency trading.

Such recent news has pushed the aggregate value of the cryptospace down more than 20% at the time of this writing, and down 36% off peak prices seen in December 2017. That said, bitcoin itself has crashed numerous times since 2010 and has "died" 175 times: https://99bitcoins.com/bitcoin-obituaries/ as governments have tried to block (excuse the pun) blockchain technologies. Blockchain is the beating heart of bitcoin and hundreds of other cryptotechnologies, many which were launched in 2017. Blockchain is trustless and functions on a peer-to-peer basis outside of government jurisdiction. It eliminates the middle man. Here was a slide I was going to use in a keynote speech. 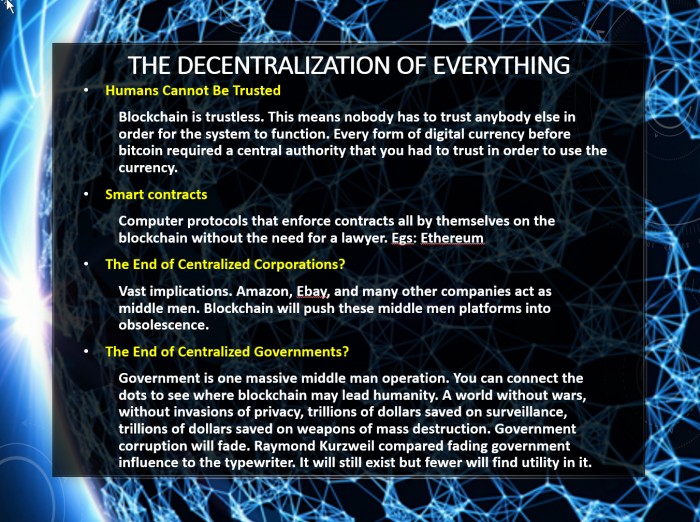 Bitcoin itself has had numerous corrections exceeding 50%, with two separate corrections each as steep as 93%. Yet it still has managed to reach new highs. Indeed, $1 invested in bitcoin at an average price of 0.001 in 2009 would be worth $12 million today (at a price of roughly $12,000). Keep in mind that a 90% correction requires a 10-fold gain to repair. In the world of cryptocurrencies, 10-fold gains can come in a matter of days to weeks as decentralization of various industries is seen as a far more efficient and superior paradigm. That said, with such furious gains come furious corrections, and many of these technologies will not bear fruit. Think dot.com boom back in the 1990s when most companies eventually failed. Still, the few that persevered such as AMZN, EBAY, and later comers such as GOOGL have led the market higher. In today's cryptospace, there are the potential AMZNs and GOOGLs based on a variety of factors NOT limited to the following:

1) Quality of management - Do the team leaders have top industry track records in their respective prior space? Were they dominant forces in their space? For example, one of the heads of NEO was a top gun at Samsung.
2) Disruptive potential - How large a market can the cryptotechnology disrupt? Fidentiax, as one of many examples, decentralizes the multi-billion dollar tradable insurance policy market.
3) Relative strength - How well does the company withstand corrections in bitcoin and ethereum since there is a fairly high degree of correlation between either or both, depending.
4) Independence from hallmarks such as bitcoin and ethereum. NEO bucked the trend by going higher in June when cyptomarkets peaked, then again more recently so far in 2018. It is known as the 'Chinese ethereum'. We know when it comes to stocks, China beats to its own drum with companies such as WB (Chinese FB), BIDU (Chinese GOOGL), and BABA (Chinese AMZN).

Because of such massive gains and losses in cryptocurrencies as can be seen here, linear charts thus make no visual sense while logarithmic charts are visually meaningful. For example, here is a log chart of bitcoin since late 2012 priced in dollars which includes today's correction. It stands at 36% off peak prices in December 2017 yet looks like a tiny little 'blip' on the chart. Meanwhile, far greater corrections such as the 83% correction in April 2013 and 87% correction from Nov 2013 to Jan 2015 are also observed on the chart:

In the history of speculation, no actual bubble ever lived to reach new highs after it burst. This is true of bubbles going back hundreds of years including the South Sea Bubble, Florida land boom, Dutch tulip bulb craze, and dozens of other famous bubbles. Thus, because bitcoin has continued to achieve new highs even after devastating corrections, there is far more to blockchain technology than mainstream media reports. Over the years, governments have used the tool of mainstream media to peddle their propaganda against bitcoin et al.

Since 2012, dozens of countries have attempted to ban bitcoin but bitcoin and other blockchain-based technologies always find a way around various regulatory bans and hurdles. You might also read the comments at the end of the article linked just above which come as no surprise. Singularly, certain countries whose currencies have plummeted such as Venezuela and Argentina embrace currencies such as bitcoin which cannot be printed and thus devalued. Venezuela is the first country to undergo 'bitcoinization'. Meanwhile, less significant countries see blockchain technology as a way to grow their own economies. It has further been argued that the growing influence of wealthy investors on politicians will prohibit crypto prohibition as they will guard the store of value of bitcoin just as they guard their housing assets. Wealthy holders are starting to go to greater lengths using their influence to keep the currency away from governments.