Bitcoin managed one of its more feeble rallies since it put in a temporary low on September 8. It is no surprise that it is heading lower once again:

Some distinguished analysts and hedge fund managers are calling for a major low in bitcoin as they have suggested that since both bitcoin and ethereum have retraced all of their rally since this bubble began in late 2017, the third bubble since 2013, a new bull market should begin. 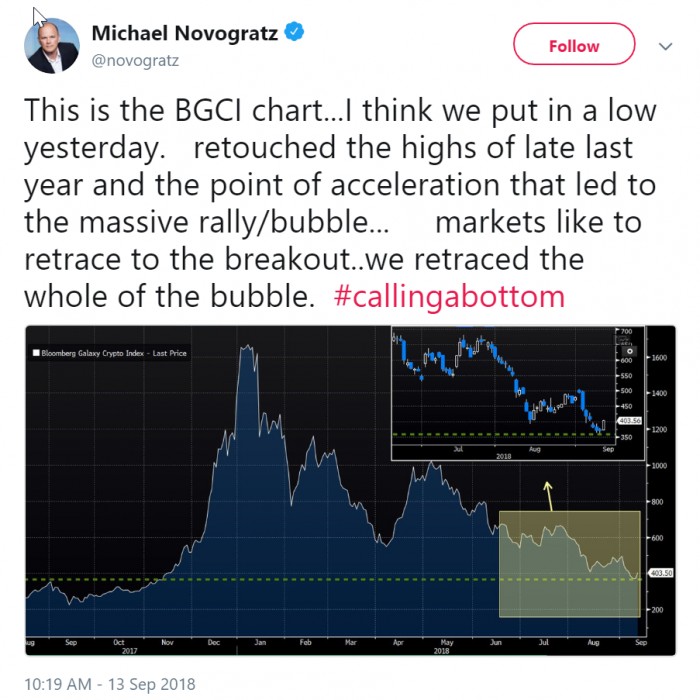 While it is possible that bitcoin along with the cryptospace could stage a more pronounced rally from these low levels as anything is possible, it is far more likely bitcoin needs to correct substantially further from its currently well-overvalued levels as discussed below.

Cryptospace Valuations Have Fallen -77% From Peak

From a high of $830 billion, the cryptospace is currently worth $193 billion on the day of this writing [September 18, 2018]. Ethereum has lost more than 2/3 of its value over the last 6 weeks while bitcoin has shown considerably greater strength losing “only” about 1/3 of its value over the same period. Peak-to-trough, bitcoin is 68% off highs while Ethereum is 88% off highs. This has led to much unrest and media demonization of ICOs as well as outcries of lack of value in the cryptospace. The hemorrhaging has been pronounced across many investors as hundreds of billions of dollars have been wiped away this year, from a peak of $830 billion at the start of this year to $198 billion today.

On September 10, 2018, the cryptomarkets brought good news as the New York Department of Financial Services (NYDFS) approved the Winklevoss Gemini dollar. In addition, the Nasdaq is looking into giving institutional investors an analytical edge on trading hundreds of crypto assets as it is looking into adding tools for predicting the price movements of crypto assets to its Analytics Hub.

But despite the good news, the cryptomarkets could not stage even a meager rally. When good news hits and markets cannot rally, that is generally a bearish sign. Indeed, on September 12, 2018, Ethereum lost another 12% of its value, hitting a low of 167 at the time of this writing [8:07 am ET September 12, 2018]. Despite the crypto bear market of 2018 and the drubbing Ethereum has taken over the last few weeks, co-founders Vitalik Buterin and Joseph Lubin remain hugely optimistic as development in the cryptospace continues to accelerate, and the number of crypto-companies coming to market remains strong.

How Much Further Down?

Nevertheless, as I have stated in recent reports, bitcoin may not hit a major low until well into 2019 or even early 2020. The following charts further underscore this point. Other coins tend to underperform bitcoin during bear markets which suggests that even the higher quality cryptocompanies of the 2000+ ICOs traded could fall even further from their already depressed levels. Thus, were bitcoin to correct as deeply as it did during the prior bear market, or 85%, it would suggest a bitcoin price of $2,950. From current levels of about $6,244, this would be a drop of some -53%. Thus, just because it has fallen 68% from peak prices achieved in December 2017, does not mean it cannot fall considerably further.

And such a steep correction may be in the cards as the current crypto bear market is due much to the network value well exceeding the number of transactions at the end of last year. Despite the serious damage done to cryptospace valuations, the current NVT Signal still shows bitcoin to be highly overvalued. 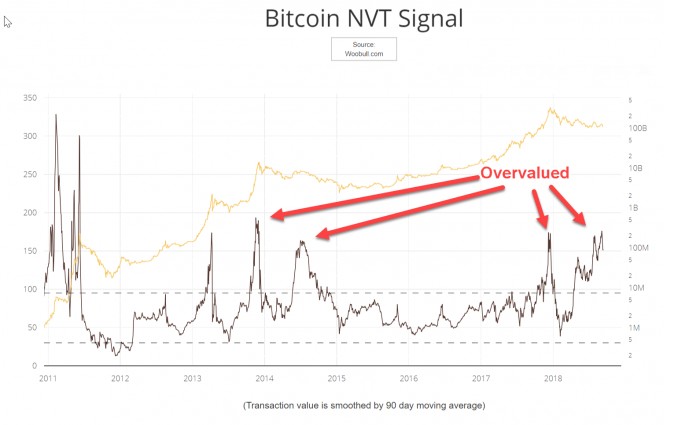 In addition to the above graph, several other metrics show bitcoin will most likely have to fall considerably further before it establishes a major low, enabling the start of a new bull market. For example, OBV (on balance volume) in the chart below suggests lower lows ahead for bitcoin as it is currently showing more selling pressure than price levels show. This bearish divergence has been standard since bitcoin peaked last December.

When the price of bitcoin calms down by trading in tight, sideways bands as noted in the chart below, volatility drops below the red line enabling higher prices. More recently, while the price of bitcoin is trying to calm down, it has yet to trade in tight, sideways bands, in agreement with the still elevated levels of volatility. This suggests further price correction.

The chart below underscores this point. It took 14 months from the Dec-2013 peak for bitcoin to hit a major low. In the current bear market, September, the month of this writing, marks the ninth month of the correction that began in December 2017. 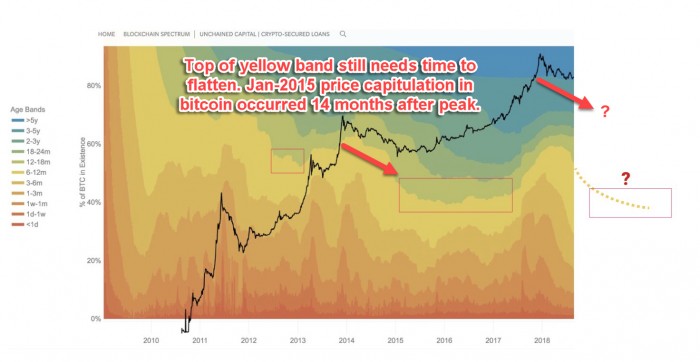 Taken together, these charts suggest a bear market in bitcoin that will last well into 2019 or even into early 2020.

As with prior bear markets, many are once again chanting that bitcoin/crypto has no underlying value. Even Vitalik Buterin, the creator of Ethereum, has said Ethereum is well overvalued since so many of the cryptocurrencies built on its platform have little to no value with unproven platforms, if they even have a platform. However, more importantly, Buterin never said there is "no room for growth" in the crypto ecosystem. He stated that there is no room for fast *1000x price increases* as we have seen in recent years. A 1000x price increase from today would mean $200T in crypto, or roughly half of today's global wealth were to be in crypto. Certainly, should this ever happen, it would likely be in a distant future instead of just a few years off. Buterin also clarified that because large portions of the population have already heard of crypto, further growth of crypto in any sense must come from *depth*, i.e., legitimate use cases, not from more hype.

Indeed, the Initial Coin Offering (ICO) space has been rightfully scolded for a vast number of ICOs being built on vapor, perhaps somewhat akin to the dot.com boom of the late 1990s, during which most dot.com companies failed due to business models bereft of substance or logic. The number of worthless business models and scam artists in the ICO space has certainly left a negative imprint. Beyond these dead parrots, nevertheless, blockchain remains transformational across many industries. Blockchain-based ICOs show substantial capacity and potential to not just complement but replace traditional venture capital as an ICO capital raise is vastly more transaction cost efficient, Issuer driven, yet transparent than the arbitrary, intransigent, and oligopolous VC world.

Maybe yes, maybe no. The majority of VCs are often little more than middlemen who invest other people’s capital whilst most of them fail to live up to their projected target of outperforming the market, to the detriment of their clients. The VCs who fall into this category still make their fees whether or not they make money for their clients. Their largest clients are typically pension funds, university endowments, and unions in both the U.S. and in Europe with nearly 40% of total VC investments even coming from government agencies. No wonder some VCs are known more as VBs (Venture Bureaucrats) over in Europe. Perhaps VC should stand for Venture Collectivist. Speaking of collectivism, the famous work “The Virtue of Selfishness” is a collection of essays written by Ayn Rand in the 1960s warning about the dangers of crony capitalism. Since then, her message of freedom, individualism, reason, and achievement seems to have been suppressed by a number of factions.

ICOs done right as well as any evolutionary construct such as asset backed tokens (ABTs) which tokenise securities shall bring transparency and market forces to this market, while the cold light of day shines on the secretive elite, “behind closed doors” type of Venture Capitalists, where the ones who stay their course will be replaced. The VC's who have made investments in the right blockchain startups will survive and thrive. The wisdom of the free, more efficient market with its large numbers of participants will judge the projects, not a few biased, anointed stock pickers. Blockchain technology removes the caste of unnecessary middle men, reducing the number of layers, thus any capital raise can be done in a fraction of the time, and projects can be completed well under budget.

The ABT is the logical next step in the evolution of the ICO in terms of capital raise. The reliability of blockchain technology enables effective fractional ownership of the fruits of an asset via a highly efficient distribution of value while bringing liquidity into markets that have been traditionally illiquid. Multiple investors will be able to own a piece of the capital gain potential and yield of a hard asset such as real estate or art. Blockchain provides a solid foundation where capital can be put to work far more efficiently.