Dr. K's Crypto-Corner
by Dr. Chris Kacher
Cryptotechnologies...Kryptonite for Governments™
There is separation of church and state. But what about separation of money and state? Back when the church was intertwined with the state, those who went against the church were massacred. Such executions were primitive, barbaric, harmful, and unjust. Today, most people celebrate the separation of these two entities. Yet money which is also just as essential as spiritual beliefs and practices has always been part of the state.

Today's world has become far more steeped in state control to the point where the renowned Ed Seykota wrote a book about it called 'Govopoly'. Money has always been a method of the state controlling the individual. Millions have perished over the centuries because of this fact due to rogue dictators or in today's world, dictators in disguise. Money is created for the benefit of the state. The state controls it, oversees it, and makes laws about it. The biggest promise cryptocurrencies hold is in separating money and state. In the meantime, we live in a period which the world may look back at in hindsight and see it as a dark age.

How will this separation of money and state occur?

A growing number of people, in time, will choose bitcoin and potentially other cryptocurrencies over fiat because fiat always gets debased. Some have suggested fiat currency is the greatest scam ever perpetrated on humanity. But 'scam' may be too harsh a word since decentralized currencies did not exist up until blockchain was born in 2009, so fiat was arguably the best choice. That said, technological revolutions such as blockchain could push outdated paradigms such as central banking into obsolescence or, at the very least, diminish their functionality.

If we look at the history of banking, a small group of people in government and banking have always printed money out of thin air and used it for their own benefit whether to fund their wars or for some other purpose. Plus, they get first use before general price levels rise. Over the last decade, central banks have printed trillions of dollar equivalents, placing governments at record levels of debt. As that money flows through the system, the greater supply of fiat causes price levels to rise which makes everyone else poorer due to less purchasing power. Notwithstanding the extremes of the past decade, the price of goods and services rise over time, and fiat currencies such as the dollar today only have 5% of the buying power they had a century ago. 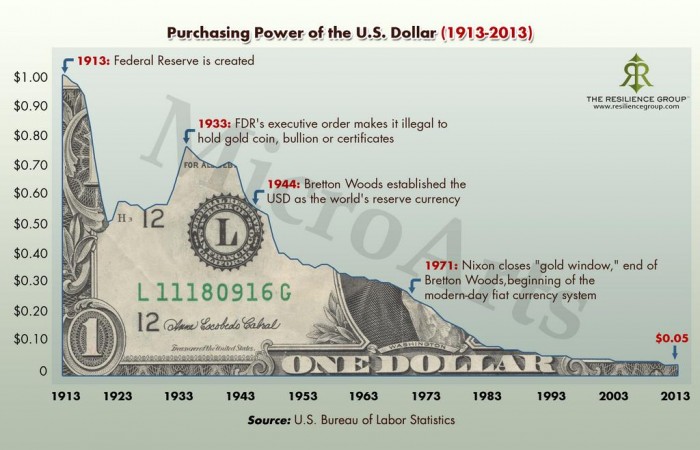 Contrast this with bitcoin which cannot be debased. There are only so many bitcoins and the number in existence is known. So as a country's currency devalues, some may prefer to buy and hold bitcoin against their own currency. Millions of families in struggling countries whose respective currencies are being devalued such as in Venezuela have done so. Even in the case of those countries such as the U.S. whose currency is relatively stable, some have chosen to buy and hold some bitcoin as a way to diversify their assets. Ray Dalio who runs the largest hedge fund in the world recently said he expects to see a major devaluation across all fiat currencies within the next two years. Couldn't happen? The U.S. government devalued the dollar by 41% in 1934 in the midst of the Great Depression.

As the staggering levels of global debt continue to devalue fiat currencies as a whole, the world at the margin will start to move toward cryptocurrencies such as bitcoin. As the amount of wealth stored in bitcoin and other cryptocurrencies increases, the ability for governments to print money will diminish. Imagine a world where 90% of transactions and wealth are stored in cryptoassets such as bitcoin. At that point, any central bank that printed currency would debase the currency by a far greater amount as there would be less real currency to print against. Against a debaseless cryptocurrency such as bitcoin, any printing would reduce demand for the currency which would further lower its value.

That said, governments will still exist. Bitnation-style governments may auction various services in the distant future. In the meantime, governments have always funded themselves in three ways: 1) tax revenue, 2) issuance of bonds, and 3) printing money. If the ability to print and debase currencies is minimized or eliminated, governments will lose a major way of funding themselves which means much smaller governments in the future. This also means a much more honest government that exists only by taxation and borrowing, not printing money out of thin air which is the greatest legalized ponzi scheme ever created.

One final thought: Fiat is value by decree meaning a government says their fiat currency has value just because they say it does, or in other words, backed by the full faith and credit of the respective government. Yet with governments holding record levels of debt, where is the "credit"? Meanwhile, the biggest contradictory criticism of bitcoin is that it holds no value !