Today's technologies are growing at exponential speeds whether it be in the areas of artificial intelligence, virtual reality, or blockchain technologies. This creates numerous tipping points where massive transformation awaits, but with such mega changes come the destruction and replacement of the old platforms and paradigms. Corrupt status quo regimes always resist such change and often in a successful manner, at least for a while, doing away with those deemed iconoclastic to the order of things. Nevertheless, once change takes place, this inevitably leads to a period of heightened volatility and short-term uncertainty on many levels. Thus it comes as no surprise that great change has generally been met with fear, skepticism, suppression by governing bodies, derision, and some casualties. That said, what is coming is the mother of all changes which, while it can be slowed, cannot be stopped, so buckle up, the future is now.

Why Blockchain Technology is Superior to the Internet

The internet is a data transport protocol TCP/IP which is simply a system for moving information. The problem is the protocol is insecure because back when the internet was launched in the early 1990s, we did not have the processing power to run the types of cryptography necessary to make it secure. The internet then continued to develop over the years with this insecure protocol. What blockchain does is it creates a secure data transport protocol. When you fix security, you allow the internet to reach its full potential. Blockchain effectively creates Web 3.0, an internet that is private, secure, decentralized, and censorship resistant. It effectively transforms the internet from Web 2.0 to Web 3.0.

Bitcoin, which is by far the largest blockchain even when all other cryptocurrencies are combined, is the biggest leap forward in the democratization of money that makes for a more fair world. Bitcoin puts monetary control into the hands of the individual, taking financial power away from government. We currently have 3 billion people who are unbanked and another 3 billion with limited banking. Bitcoin will democratize the global financial system so every human being on the planet will have equal access, so that in the next few years, a massive number of the world's unbanked will be coming online and accessing bitcoin through cheap mobile phones. This has already helped hundreds of millions protect their savings from plummeting currencies who live under repressive, dictatorial regimes.

A number of countries with weak institutions and unstable national currencies such as Venezuela are becoming 'bitcoinized'. Instead of adopting the currency of another country—such as the U.S. dollar—some of these economies are seeing a growing use for virtual currencies.

There is a tipping point beyond which coordination around a new currency is exponential. In the Seychelles, for example, conversion to the dollar jumped from 20 percent in 2006 to 60 percent in 2008. In the future, more countries may prefer to hold virtual cryptocurrencies rather than physical dollars because it is becoming easier and safer to hold cryptocurrencies such as bitcoin than to obtain paper bills to the world's unbanked. Further, as bitcoin matures, it could actually become more stable than fiat.

But even with volatility, a cryptocurrency could be pegged to the dollar, or a stable basket of currencies. Issuance could be fully transparent, governed by a credible, pre-defined rule such as through an algorithm that can be monitored or even a “smart rule” that might reflect changing macroeconomic circumstances.

The Future of Banking

Meanwhile, banks remain expensive, inefficient, and largely incompetent. A Fed-ex envelope with $1000 gets faster to another country than a bank transfer. And it is a closed system. With today's financial institutions, any settlement network requires you be a bank. If you want to be part of visa/mastercard, SWIFT, ACH, fed wire, SEPA, etc, you have to be a bank. Bitcoin, on the other hand, provides a non-political standard of value and open settlement network where anyone, any company, and any country can participate. If the U.S. is at war with Russia, any Russian can settle with any American despite the countries being at war.

Early conversations with banks in 2013 were debugged, private meetings. They wanted to know if bitcoin would destroy their business. Bitcoin technology brings both positives and negatives. Banks cant stop innovation so they should get smart and start deciding if they want to be an early innovator in this technology or a latecomer. The analogy is VOIP (voice-over-IP) which experts said would destroy the telecoms, yet the biggest beneficiaries were the telecoms. They co-opted the technology, re-architected their middle and back offices, and created massive savings.

Banks right now have a big choice, especially in developing countries, some which have hyperinflation. In fact, more than 20 countries have had suffered bouts of severe inflation over the last two decades. Central banks in such countries are losing control over their currency but for the benefit of its citizens. For example, the most advanced payment market in the world is in Kenya. 68% of payments are done with mobile phones using a digital currency which is a prepaid cell phone minute called M-PESA. This now represents about most of Kenya's GDP. The Kenyan shilling is no longer the primary currency in that country. While M-PESA started before bitcoin, bitcoin trumps physical currency so is being easily integrated with M-PESA via an early bitcoin friend of mine who started BitPesa in 2013. Bitcoin also stands to be the direct beneficiary from other countries that are also undergoing radical shifts away from their native currency due to deep inefficiencies or a simple lack of financial infrastructure. Bllions of unbanked and underbanked will be coming online in the next several years with cheap mobile phones which will allow them to transact and store value via bitcoin and BitPesa. BitPesa is already enabling businesses and individuals in African countries to send and collect payments allowing them to participate in the global financial market via easy cross-border payments, inexpensive remittance transactions, and simplified lending.

Keep in mind many of these emerging crypto-platforms are still in an embryonic state, so expect hiccups as they are implemented. Most blockchains are not yet able to scale to the degree that is needed as the technology is still very early in its development, though bitcoin's lightning and segwit are about to come online to dramatically improve scaling and speed while reducing fees. In this regard, we are probably where the internet was at around 1994-95 with just 10-20 million users.

The only blockchain that has hashing power in a league of its own where no one can change or control it is the original bitcoin. Bitcoin is decentralized, trustless, and censorship resistant with a robust, secure protocol. That said, ethereum and its blockchain may be able to co-exist with bitcoin given the numerous cryptocompanies with massive disruptive potential that are building on ethereum's blockchain.

Is Bitcoin in a Bubble?

Bitcoin is currently worth about $170 billion. The whole cryptospace is worth about $450 billion. By contrast, in 1999, the dot.com bubble pushed the internet to a peak value of about $7 trillion in 1999 dollars. So while a tidal wave of ICOs came online in 2017, they may just be getting started. Relative to that market which was betting on the future potential of the internet which is inferior to blockchain technology, bitcoin and blockchain technology stand to have valuations in the tens of trillions of dollars within the next several years. Those valuations will be achieved even after bitcoin's bubble bursts once again as it has dozens of times since 2009 with corrections as steep as 94%.

Bitcoin is deflationary in that no more than 21 million will ever be minted. It is a non-sovereign currency issued by open-source software, it is transparent, no one controls it, built on math, and is deflationary rather than inflationary, so as more come online, especially the 3 billion people from the third world (little to no financial resources) and another 3 billion from the second world (limited financial resources), the value of bitcoin should continue to rise.

I would even aver that bitcoin is still in the early stages of an S-curve in which case, its price could easily reach into the millions of dollars over the next decade. 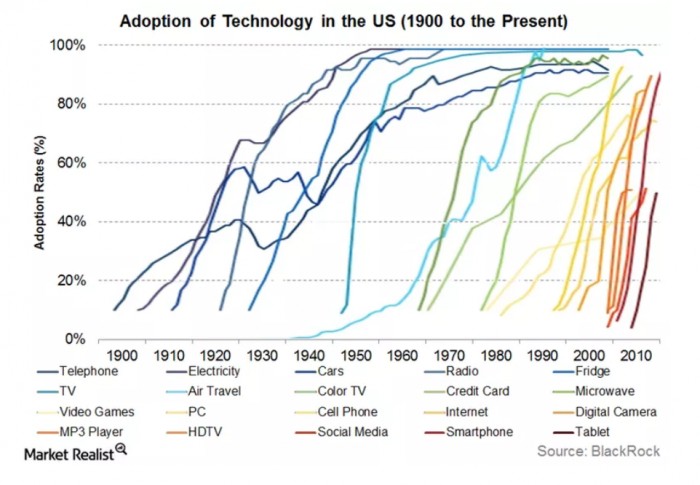 Blockchains will decentralize anything that can be stored digitally such as money, data, identity, and ownership records.The potential disruption of legacy institutions and business models is massive. In late September 2017, the head of the IMF, Christine Lagarde, said that cryptocurrenices have as much as of a future as the internet itself and cautioned that cryptocurrencies can displace central banks, conventional banking, and fiat currencies in the long term. It even "puts a question mark on the fractional banking model we know today." She went on to say that any serious problems with the technology behind existing cryptocurrencies will be overcome.

She reminded her colleagues that, "Not so long ago, some experts argued that personal computers would never be adopted, and that tablets would only be used as expensive coffee trays. So I think it may not be wise to dismiss virtual currencies."