Crypto Report - My Talk Transcript on the Health of the Bitcoin Market along with the Mayor of London, CEO of AAVE, et al 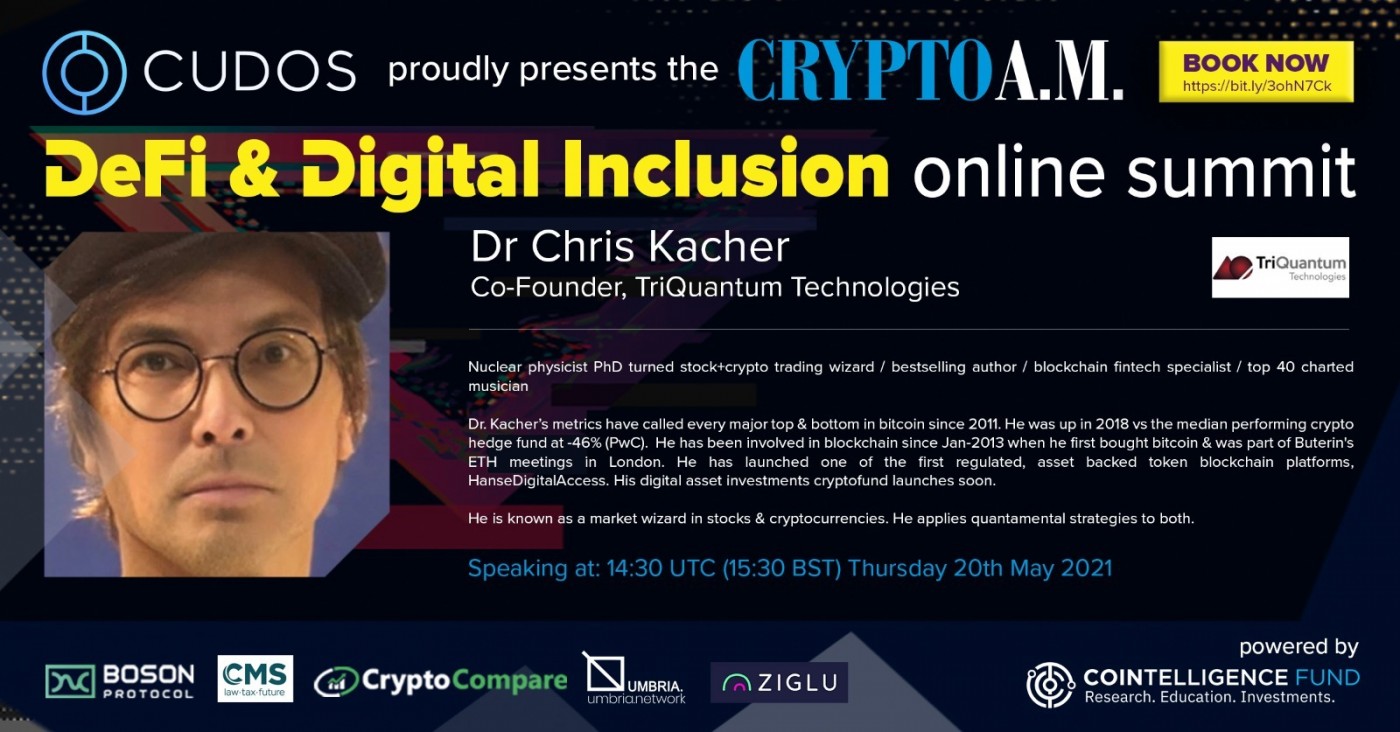 Riding the CryptoRocket into the Trillions

I have often said trading crypto is like riding your own personal nuclear powered rocket. The volatility is well beyond what I have ever experienced in stocks even during the dot-com boom. Fortunes can be made or lost in days, especially if one dabbles in leveraged futures cryptotrading. The emotions of greed (FOMO) and fear (FUD) are amplified at least an order of magnitude above "10".

The odds of making elements at these very high atomic weights are scant to infinitesimal to say the least. Half-lives of microseconds to nanoseconds are typical so cutting edge particle detection is key, much as cutting edge cryptocurrency trade detection for the "no-brainer" trade is key. I define such a no-brainer trade as buying at an optimal entry point so your downside risk is less than 2-3% while the reward is 50-100% or more. While a 3:1 reward:risk ratio is the benchmark when it comes to trading, such a no-brainer trade carries a 20:1 or better reward:risk ratio. This enables one to leverage up with very low odds of getting liquidated, provided one takes profits when the move is over. Developing one's chart eye is key to finding such no-brainer trades  and developing one's chart eye is a lifelong challenge. The legendary William O'Neil for whom I helped manage his personal wealth for several years often said he remains a humble student of the markets despite the billions in wealth he amassed.
When a major achievement is reached, it is analogous to being blessed with a front page story in the case of when a new element is confirmed, or in the case of trading, blessed with a fortune made with a leveraged trade. Then it's a matter of keeping that fortune while potentially adding a zero or two or more onto that fortune over time. 10,000 becomes 100,000 becomes a million, and so on.
The Half-Life of Bitcoin is ∞

With Professor Seaborg's memory in mind who was my thesis advisor at UC Berkeley, here are some observations of the half-lives of various currencies.
⦿The half-life of monetary energy stored in a weak fiat currency is ~2 years given countries with deeply corrupt governments such as Venezuela, South Africa, and Argentina.
⦿The half-life of money in a strong fiat currency is ~5 years given the massive flows of quantitative easing across more than 80 central banks. President Joseph Biden has three stimulus packages with a current aggregate total of $6 trillion on the way.
⦿The half-life of dogecoin is 15-20 years, or another near doubling of its current life which began in the early 2010s as its descent will be lengthy (short sellers pay attention) thus the longer than expected half-life.
⦿The half-life of bitcoin is ∞.
But What About Ethereum?

But What About Ethereum? Ethereum (ETH) most likely has the second longest half-live of the cryptocurrencies. It has one of the top development teams. While Bitcoin is disinflationary, ETH will become deflationary starting in July when a major protocol is launched. It will then be even more scarce given several factors such as its migration out of exchanges into long term storage, its total value locked in DeFi which currently carries a value of more than $80 billion having doubled yet again over just the last 7 weeks, and NFTs locking up a substantial amount of ETH. Institutions and companies are starting to recognize Ethereum in addition to Bitcoin. ETH therefore should at least 10-20x from current levels, or reach a price of $25,000 to $50,000 in this bull cycle.

Where Are We in this Bull Cycle?

My metrics have identified every major top and bottom in Bitcoin since 2011 to within a few weeks or less. Various metrics on and off the blockchain that I use continue to carry decent predictive value. While Bitcoin has been lagging as of late, this also occurred in mid-2017 for nearly two months. Currently, bitcoin has been in a correction since mid-February, or about 3 months. Other flagship coins such as ETH and Binance (BNB) have been outperforming. As a consequence, Bitcoin dominance has fallen sharply. This is similar to what happened in 2017. But the alt coin season is far from over. Various metrics such as S2F (stock-to-flow) show we are perhaps about midway through the current bull cycle.

I use a backdrop of reliable metrics such as S2F that suggest the bull market is far from over, but instead, that we are in a typical sharp correction within the confines of a bull market. Bitcoin had several such corrections in both the bull markets of 2012-2013 and 2016-2017 before it had a major top. The most recent correction is similar to the one in mid-2013, mid-2017, and Mar-2020. Note how Bitcoin has always overshot the S2F line in prior bull markets.

Sharp corrections will continue to occur much as bitcoin had five such sharp corrections in 2017 alone before it peaked in December. Since 2020 in the midst of the bull run, Bitcoin corrected -61.9% then most recently -53.7%. As you can see, such corrections are not uncommon when it comes to the cryptospace. 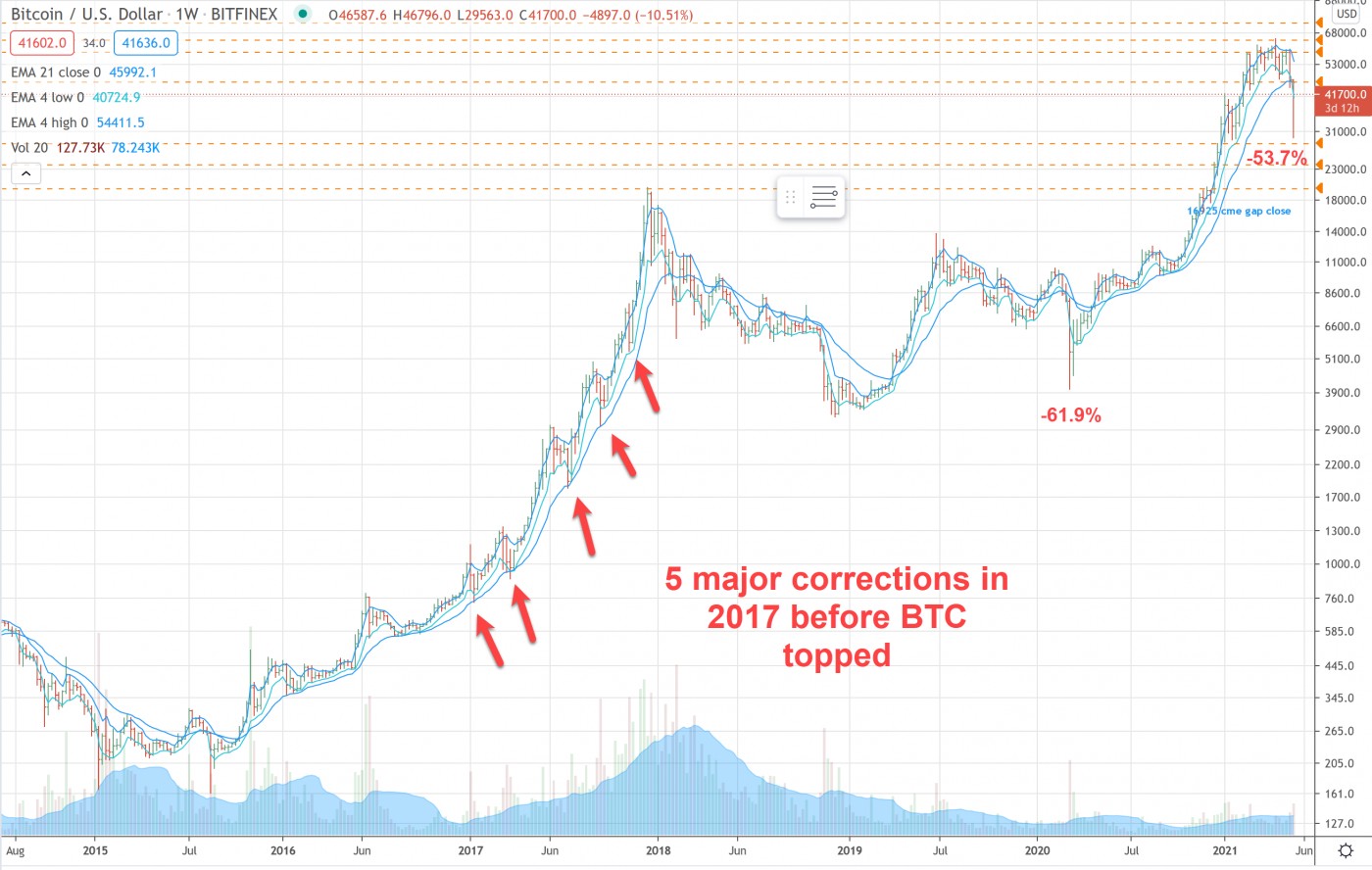 The steep correction we have witnessed over the last couple of days was initiated primarily by news that the Binance Smart Chain protocol Venus was hacked. This was akin to the Maker DAO hack in Mar-2020 when Bitcoin lost -61.9% and Ethereum lost -68.9%. Whales rushed to sell as shown by the soaring amount of bitcoin flowing onto exchanges when bitcoin was still above $50,000. Leveraged trades were liquidated creating a cascade of selling. As bitcoin and other cryptocurrencies fell, major exchanges froze so whales who wanted to step in and buy at much lower prices were unable to do so. Bitcoin didn't get support until it hit $30,000 creating a sharp V-bottom. On top of this, FUD about China banning bitcoin, Wall Street firms selling bitcoin for gold, Elon allegedly selling bitcoin and other pessimistic and manipulative stories were added to the mix. 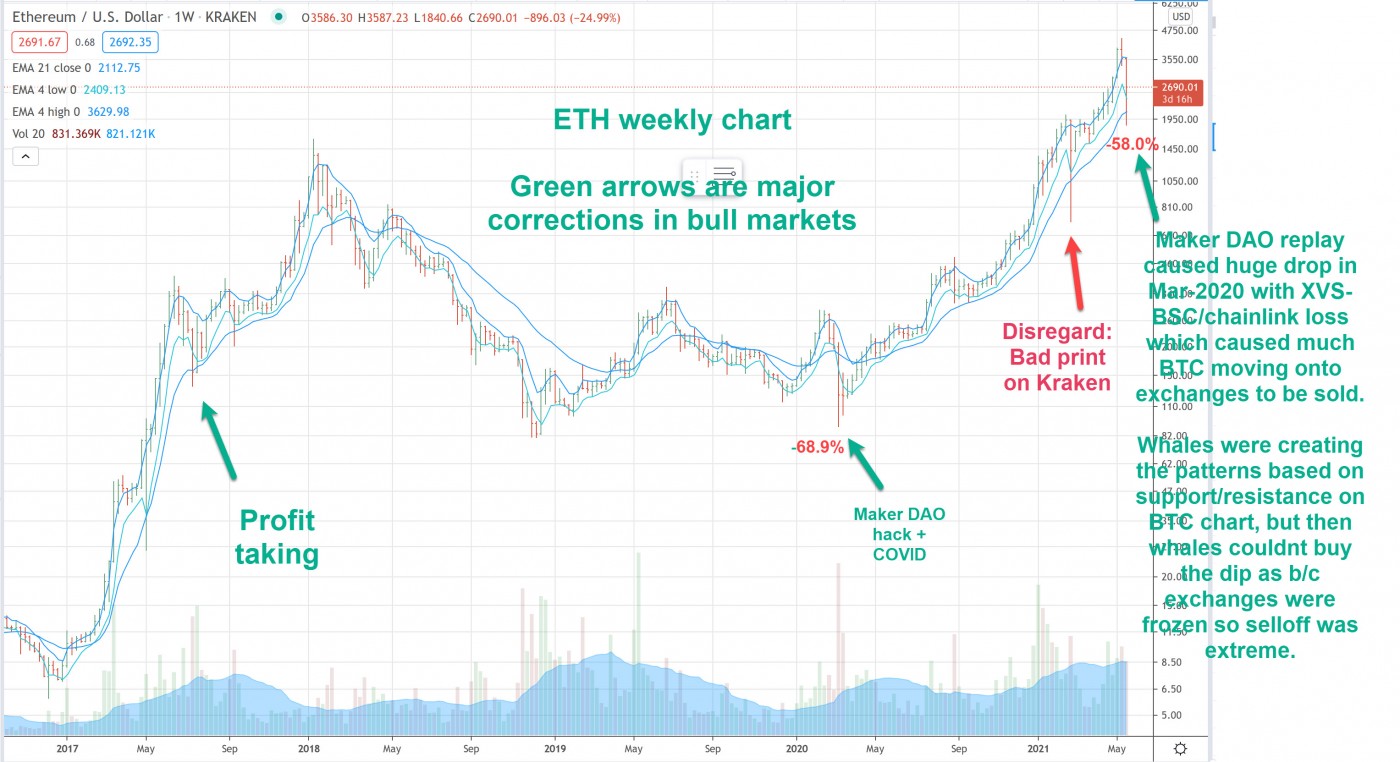 Indeed, whales use various metrics such as ones showing excessive greed to shoot down traders by forcing liquidations in leveraged trades such as margined positions and leveraged futures. A cascade of selling occurs across cryptocurrencies, then they come in and buy at a lower price which creates the sharp 'V' bottoms seen on daily and even hourly charts. 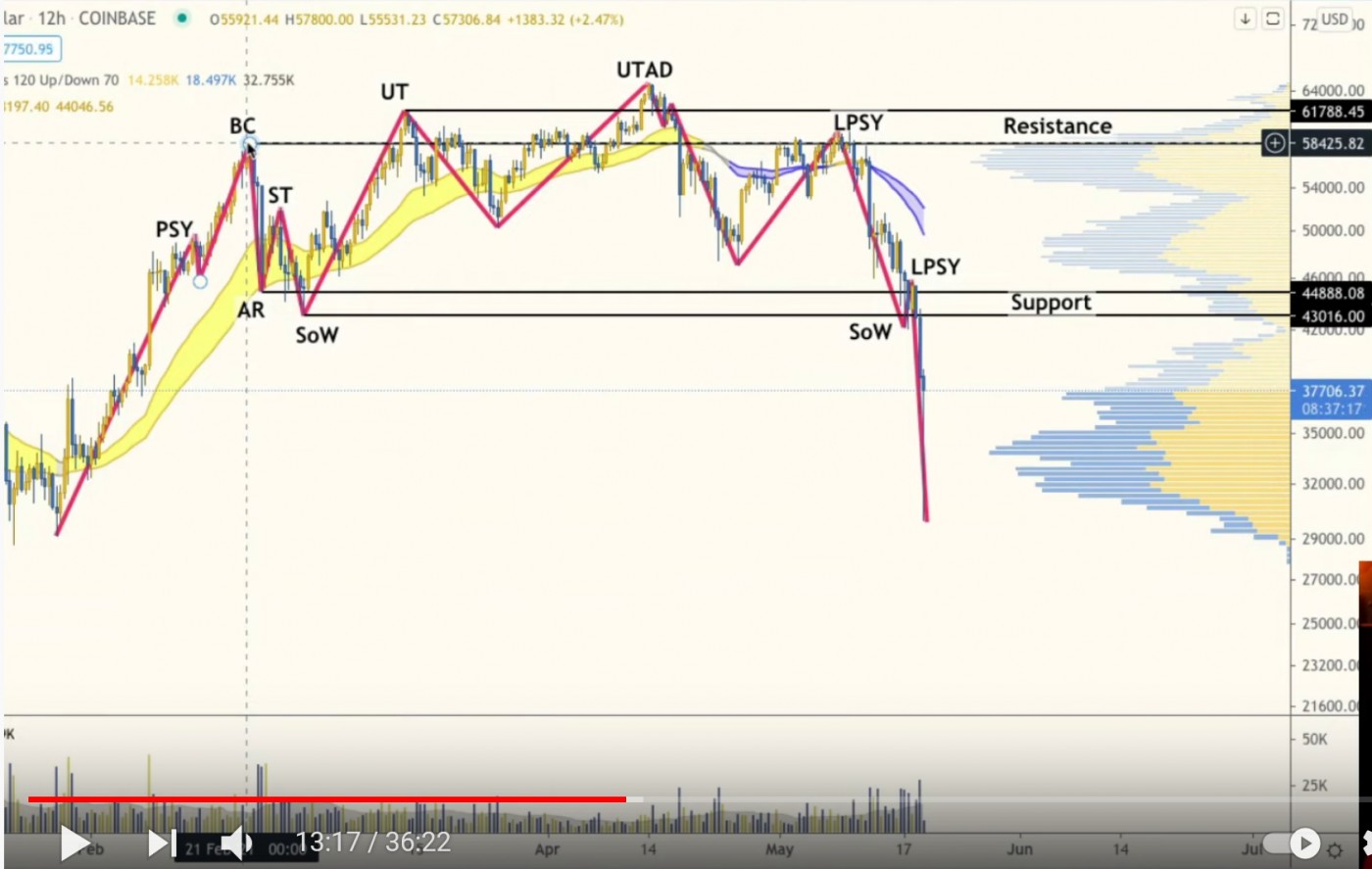 The head of Binance, CZ, said more than 30 million users trade futures on Binance, and of these, more than 80% use leverage above 20x. Thus billions of dollars are liquidated when whales hit the market with sell orders. In mid-April, nearly $10 billion in futures accounts were liquidated, then more recently in May with the Elon announcement, nearly $5 billion was liquidated. The current correction has liquidated close to one million traders over the past 24 hours for a record total exceeding $10 billion. So proceed with caution.

For the conservative, dollar cost averaging into bitcoin and ethereum are a relatively safe bet, but never invest money you cant afford to lose since black swans beckon on the horizon. For the more adventurous, other top 20 alt coins such as Binance (BNB) and Cardano (ADA) are good bets. For the cryptorocket riders, top 50 alt coins such as Pancake Swap (CAKE), Polygon (MATIC), and Kusama (KSM) are worth a shot as detailed on my website www.selfishinvesting.com. And finally, for those who want to go nuclear, there's crypto futures, but try to keep the leverage manageable so you won't get liquidated.

Back in 2017, I was asked to give the keynote at the Geneva WealthTech event in Switzerland where CEOs of UBS, Saxo Bank, the mayor of Geneva, and other notables were attending. I had a slide that showed Bitcoin at $1,000,000 by the end of 2023. My prediction still stands. Joining Bitcoin will be Ethereum at $50,000 to $100,000. In time, given the exponential pace of evolution in the cryptospace along with fiat debasement we are witnessing around the planet, the title of this talk will be obsolete in the next ten years when it won't just be trillions but perhaps quadrillions. And to paraphrase the popular lyric in the 1960s, the revolution will not be centralized™.
Like what you read?
Let us help you make sense of these markets by signing up for our free Market Lab Reports:
This information is provided by MoKa Investors, LLC DBA Virtue of Selfish Investing (VoSI) is issued solely for informational purposes and does not constitute an offer to sell or a solicitation of an offer to buy securities. Information contained herein is based on sources which we believe to be reliable but is not guaranteed by us as being accurate and does not purport to be a complete statement or summary of available data. VoSI reports are intended to alert VoSI members to technical developments in certain securities that may or may not be actionable, only, and are not intended as recommendations. Past performance is not a guarantee, nor is it necessarily indicative, of future results. Opinions expressed herein are statements of our judgment as of the publication date and are subject to change without notice. Entities including but not limited to VoSI, its members, officers, directors, employees, customers, agents, and affiliates may have a position, long or short, in the securities referred to herein, and/or other related securities, and may increase or decrease such position or take a contra position. Additional information is available upon written request. This publication is for clients of Virtue of Selfish Investing. Reproduction without written permission is strictly prohibited and will be prosecuted to the full extent of the law. ©2022 MoKa Investors, LLC DBA Virtue of Selfish Investing. All rights reserved.
FOR OUR FREE MARKET LAB REPORT :