There is the freedom to choose one’s religion. Bitcoin allows one the freedom to choose one’s money. Simply put, bitcoin is the separation of Money and State. This does not mean bitcoin cannot co-exist alongside fiat... for now. Most countries have capital flow controls. That a few wealthy Chinese are using bitcoin to move big sums outside of China is significant as the trend toward widespread adoption as more people have mobile btc wallets make such money transfers simple. As Tim Draper et al have said, fiat currencies are bounded by country borders. The Nigerian Naira drops 30% when you cross the border. Outside Argentina, the country's peso is currency non grata. There is increasing demand for cross border value exchange with no limits placed on value. Argentinian born Wences Cesares has been outspoken among others on this topic.

Both Draper and the CEO of Twitter have said if you try to buy something with fiat in 5 to 10 years, they will just laugh at you. Perhaps this is most true in those countries with sharply depreciating currencies.

In 2016, Brazilians moved $160 million in and out of bitcoin. In 2017, it hit around $2.4 billion. In 2017-2018, the number of Venezuelan families rose into the millions as they converted their native currency into bitcoin into stable fiat to prevent the further rupture of their savings. After the Venezuelan government outlawed bitcoin, they did an end run around their government by moving into Dash (formerly known as Dark) which hides all crypto transactions. They thus use Dash to move out of their native currency, then convert Dash into fiat. Dash is a sufficiently liquid cryptotech being in the top 20.

Bitcoin's killer app is store-of-value (SoV). It is censorship and sovereign resistant, can be made private, immutable, and is decentralized. Why is bitcoin the only coin whose killer app is SoV? The order of importance for SoV:

Bitcoin is the only coin that checks all of the boxes above. In this regard, no other cryptotech/cryptocurrency has achieved anything close to bitcoin. On point (3), ethereum comes in second, but fails on (2) as its core code has changed a few times since its launch.

Many ICOs that trade try to artificially manipulate (3) by using market makers to stimulate liquidity. There are also the anti-FUDders who hold coins/tokens thus have a vested interest in painting a falsely optimistic picture around an ICO, putting too much weight on partnerships and road map and often lack a logical strategy on how they plan to get from point A to B to C to Z using their proposed software/infrastructure. Vaporware anyone? This is the opposite of trolls who unfairly throw as much mud as possible against a project to see if anything sticks. Reddit is an excellent platform for finding truth behind an ICO, though it will take a sufficient amount of digging to wade through the 95% of the writings that have false agendas or are simply mistaken.

Real, enduring, organic growth is key. Only bitcoin's hash rate continued to climb in more or less steady fashion even in a year such as 2018 as a growing number of the world's unbanked, which totals about 3 billion, come online by way of cheap mobile phones and wifi:

Liquid, Bitcoin`s first sidechain, went live on 10 Oct 2018 as denoted by the vertical line above. Fortunately, bitcoin's on-chain volume as shown in the chart below is still tracking network value quite well thus Liquid is not yet impacting the NVT Signal. This suggests that bitcoin will need to retest lows once more before establishing a major bottom. 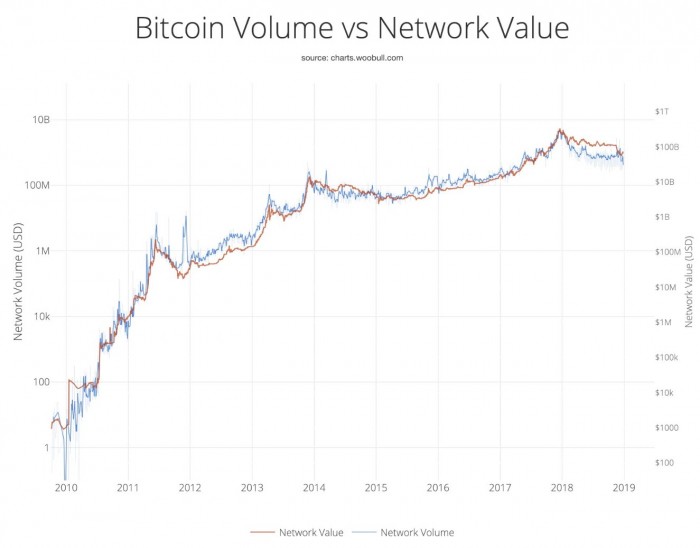 For those who have suggested governments can destroy bitcoin by hiring enough black-ops hackers to engage the 51% double spend, this is an irrational fear. Andreas Antonopoulos suggests that in such an event, the network would quickly react and implement countermeasures within a couple of hours. Hackers might be able to affect the next block or two, launching a double-spending attack by holding on to enough power to confirm the majority of transactions. However, this would take a huge amount of expense and effort and, should a big double spend be attempted, the data would appear on the blockchain for all to see, thus the quick countermeasures.

Keep in mind that the U.S. government has tried in vain since 1995 to suppress p2p bit torrent file sharing, but for every "pirates bay" knocked out by the courts, 10 new ones are born. A material part of internet traffic today remains bit torrent file sharing though platforms such as iTunes and Netflix offer suitable alternatives.

The question then becomes whether bitcoin is a suitable alternative for people to transact value across borders without capital controls? 3 billion remain unbanked with another 1 billion partially banked are massive numbers, thus powerful trends show that while the numbers remain small, there is acceleration, just as with the internet in 1994, while infrastructure is being built.

In 2016, international migrants sent  more than $600 billion back to family members still living in their home countries. Of this, $441 billion went to developing countries. In such countries, it can be a Kafkaesque task to get verified for a bank account while remittance fees remain absurd. Some cryptocurrencies such as bitcoin and Dash are being used to reduce the fees of such international transactions. Developing nations are gaining new technologies, but most banks still rely on archaic verification processes.

Nevertheless, the number of the world's unbanked will materially diminish over the next several years. Here are a few ethereum-based blockchain projects that have made serving the unbanked and underbanked their main focus:

OmiseGo technology enables peer-to-peer value exchange and payments using a digital wallet platform.  They aim to encourage financial inclusion in emerging markets by creating a platform that any company can use. Their network can potentially decentralize market liquidity and high-scalability payments and to help resolve payments across emerging eWallet payment networks. This would enable the unbanked to transact value for the first time, thus have control over their financial lives and access financial services previously unavailable.

WeTrust utilizes their Trusted Lending Circle product which allows users to create Rotating Savings and Credit Associations on the blockchain. Benefiting from the immutability, security, and transparency of blockchain, this instrument could be seen as a stepping stone for individuals to build a blockchain powered credit score.

HumanIQ combines blockchain and biometrics to create apps that would allow transactions and investment in the third world. Users of the platform could earn tokens at home, using bio-identification procedures, and exchange those tokens for local currencies using an app. Basically, those without any formal identification could have an opportunity to create a digital bio-identification straight from their cheap mobile phones.

Buckle up. We're going into a new era (͡:B ͜ʖ ͡:B)
Like what you read?
Let us help you make sense of these markets by signing up for our free Market Lab Reports:
This information is provided by MoKa Investors, LLC DBA Virtue of Selfish Investing (VoSI) is issued solely for informational purposes and does not constitute an offer to sell or a solicitation of an offer to buy securities. Information contained herein is based on sources which we believe to be reliable but is not guaranteed by us as being accurate and does not purport to be a complete statement or summary of available data. VoSI reports are intended to alert VoSI members to technical developments in certain securities that may or may not be actionable, only, and are not intended as recommendations. Past performance is not a guarantee, nor is it necessarily indicative, of future results. Opinions expressed herein are statements of our judgment as of the publication date and are subject to change without notice. Entities including but not limited to VoSI, its members, officers, directors, employees, customers, agents, and affiliates may have a position, long or short, in the securities referred to herein, and/or other related securities, and may increase or decrease such position or take a contra position. Additional information is available upon written request. This publication is for clients of Virtue of Selfish Investing. Reproduction without written permission is strictly prohibited and will be prosecuted to the full extent of the law. ©2022 MoKa Investors, LLC DBA Virtue of Selfish Investing. All rights reserved.
FOR OUR FREE MARKET LAB REPORT :