[This is a subset of the Market Lab Report]

As we have reported, major central bankers have been tightening. Today's Fed minutes showed that they are even more hawkish than expected. The odds of a rate hike in March jumped to 64.1% according to the CME Fed Futures. Further, upheaval in Kazakhstan caused the internet to shut off. 18% of the bitcoin mining hashrate comes from Kazakhstan.

Bitcoin and ethereum broke below short term support points. This comes as no surprise as even the top performing cryptocurrencies which bucked the downtrend in bitcoin have been in downtrends since December 4. Bitcoin meanwhile has been in a downtrend since November 9. Letting winners run (or even pyramiding a position) is as important as taking profits and cutting losses on a regular basis as I have written in the Crypto Reports section. Bitcoin could retest prior lows of 42000. Should it close below 42000 on a weekly chart, this would be a lower low on the weekly, a first since March-2020 when markets crashed due to C19. 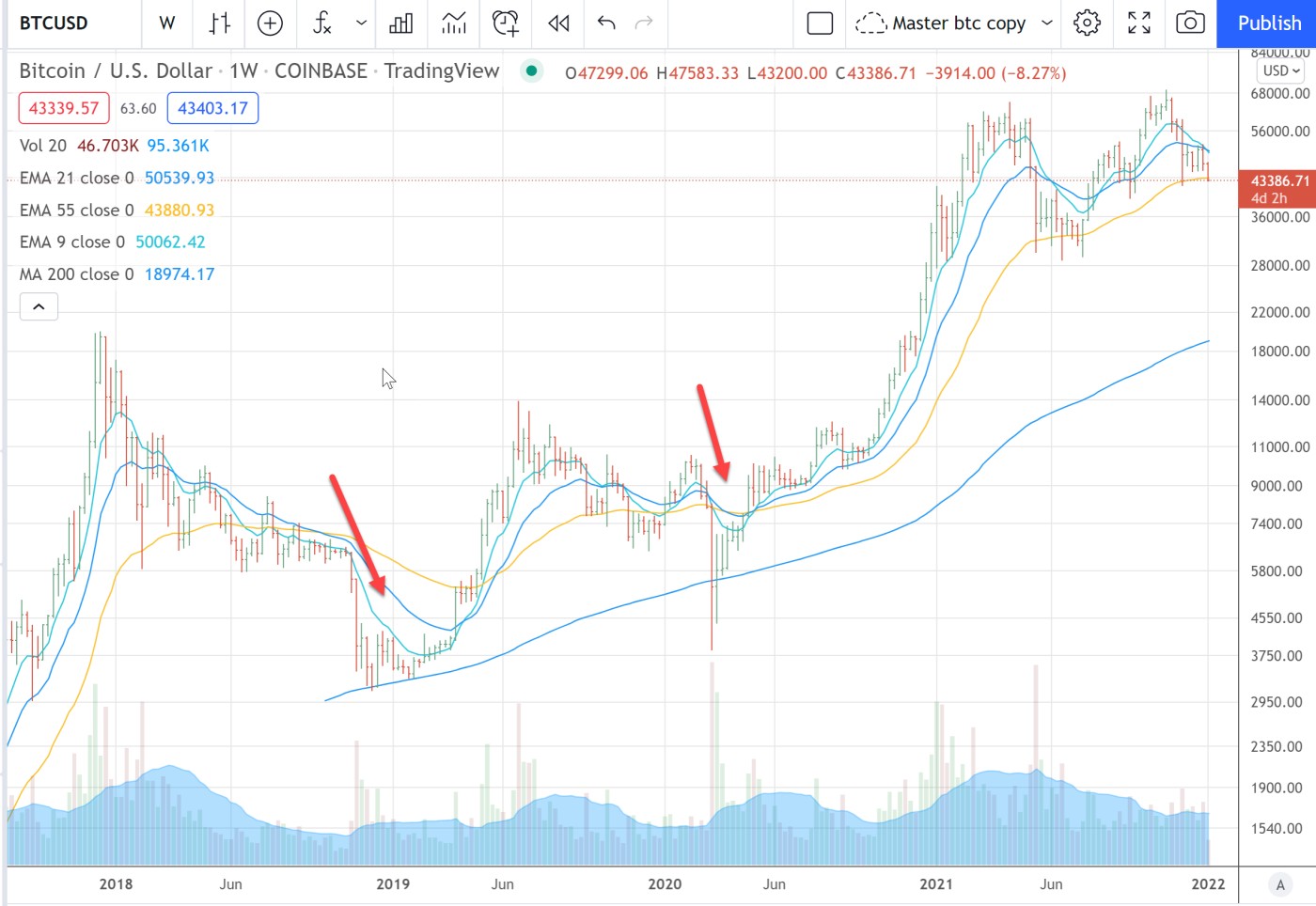 2018 was a year of tightening which caused a bloodbath in cryptocurrencies. While 2022 is different in that the metrics are still showing strength overall, there are a number of material headwinds with the main one being less QE. Less QE means a stronger dollar while having less capital to fund cryptocurrencies and stocks. Thus whenever the Fed has tightened its balance sheet or caused a taper tantrum, major stock market averages in the U.S. have typically corrected about -20%. This has been the point at which the Fed Chair has stepped in and "cried uncle". Powell did this in Dec-2018 when we had our first xmas crash on record. Expect similar behavior going forward. In consequence, a wonderful tailwind would be this "uncle" point. But until then, remain nimble. When stocks drop, cryptocurrencies also tend to correct for this reason. 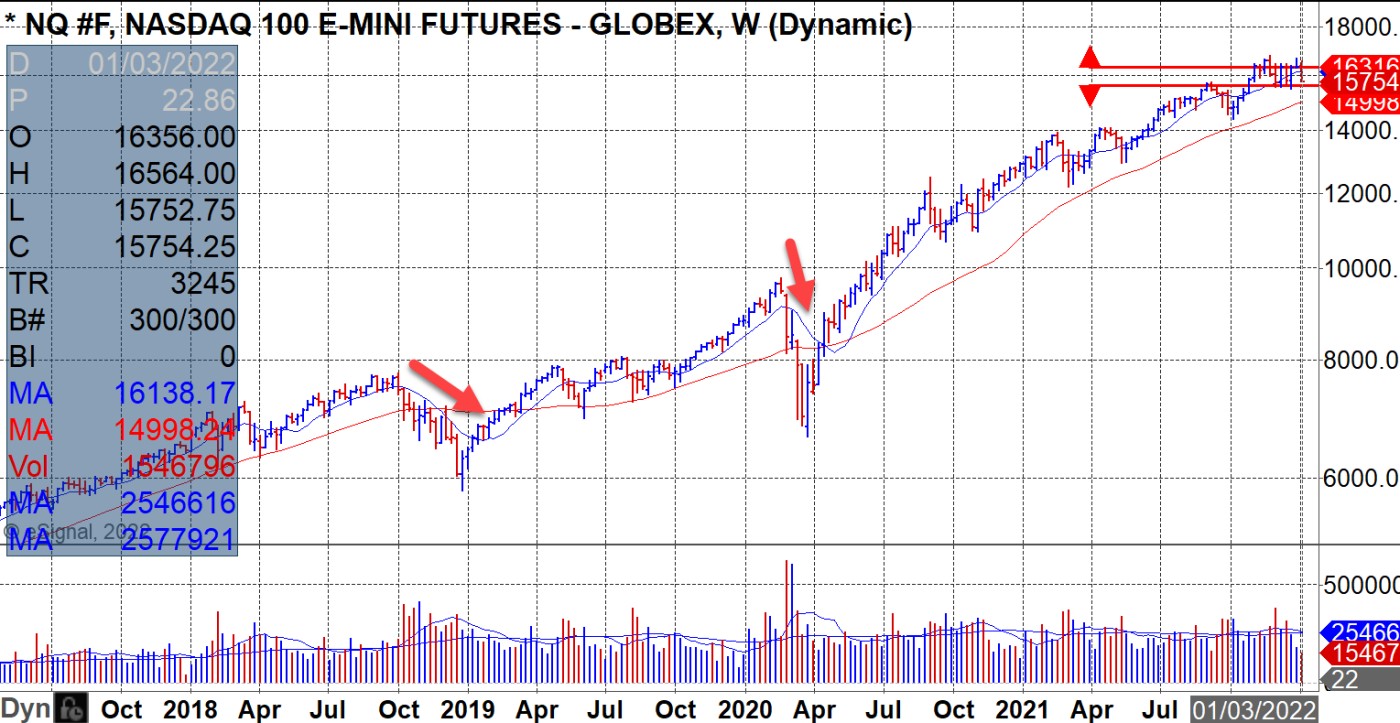 Debt is too large at this stage for any meaningful rate increases to occur before the major averages undergo material corrections, ie, beyond -20%. This means that once the debt:GDP ratio exceeds 77% historically speaking, the world passes the point of no return in terms of bringing economies back to normal. Thus the Fed may wish to try to bring interest rates back to pre-QE levels of 2008 when QE began, but this is a pipe dream. Such a meaningful hike in rates would decimate markets. Powell cannot do what Volcker did because today is massively different than when Volcker was the Fed chair. Note that Volcker's hawkish stance which sent interest rates to their highest levels did NOT crash the stock market. Times change. Debt in the U.S. alone is even greater than during WW II. Interest rates are at 5000 year lows.

The fractional banking system is designed to be inflationary. It rewards the printing of money which drives populism since those with money typically have it invested in stocks, bonds, real estate, and hard assets. As fiat debases, the value of their assets rise. By contrast, those with little savings see their living costs rise while not being able to invest in assets. Under such a system, the rich get richer. Always. Those with money have more influence over those who do not. While the Federal Reserve is supposed to be independent in principle, it is not so in practice. No central banker wants to go down in history as the one who caused a mega crash. It is easier hide behind the false virtual armor of quantitative easing and helicopter money even though these are the reasons why fiat currencies eventually fail. The system is self-perpetuating.

That said, over the last decade, whenever the major averages correct roughly -20%, the Fed chair has stepped in and reversed the tightening of their balance sheet, giving markets what they want- more QE. Why would this time be any different than hundreds of years of historic cycles? The answer: Exponentially growing technologies as I've written in prior reports. This could give the Fed more room to hike without causing the mother of all crashes. But this is a big MAYBE as the timing is uncertain. Each day brings new data so a good investor or trader position sizes their exposure accordingly. We remain vigilant as always.
Like what you read?
Let us help you make sense of these markets by signing up for our free Market Lab Reports:
This information is provided by MoKa Investors, LLC DBA Virtue of Selfish Investing (VoSI) is issued solely for informational purposes and does not constitute an offer to sell or a solicitation of an offer to buy securities. Information contained herein is based on sources which we believe to be reliable but is not guaranteed by us as being accurate and does not purport to be a complete statement or summary of available data. VoSI reports are intended to alert VoSI members to technical developments in certain securities that may or may not be actionable, only, and are not intended as recommendations. Past performance is not a guarantee, nor is it necessarily indicative, of future results. Opinions expressed herein are statements of our judgment as of the publication date and are subject to change without notice. Entities including but not limited to VoSI, its members, officers, directors, employees, customers, agents, and affiliates may have a position, long or short, in the securities referred to herein, and/or other related securities, and may increase or decrease such position or take a contra position. Additional information is available upon written request. This publication is for clients of Virtue of Selfish Investing. Reproduction without written permission is strictly prohibited and will be prosecuted to the full extent of the law. ©2023 MoKa Investors, LLC DBA Virtue of Selfish Investing. All rights reserved.
FOR OUR FREE MARKET LAB REPORT :