A number of institutions will be creating crypto platforms in 2019. NASDAQ and Intercontinental Exchange are both launching bitcoin futures platforms in the first quarter of 2019. Intercontinental Exchange (ICE) is backing a new company called Bakkt which will offer bitcoin futures trading also in the first quarter of 2019. Microsoft, Starbucks and BCG are also backing Bakkt.

All of this is paving the way for the mass entry of institutional investors into the crypto market. A big issue has been the lack of infrastructure, much as was the issue with the internet back in 1994. But infrastructure build out remains exponential even during this year's crypto winter. A number of analysts predict that institutional investments will start pouring into crypto in the first half of 2019.

So while most of the headlines concerning crypto focus on its recent price drops, insiders say what’s happening below the surface is far more exciting and consequential to the future of the industry.

“What’s happening behind the scenes is companies are being built to create infrastructure to enable the on-boarding of a whole new category of investors — that’s the institutional investors,” said Barry Silbert, the founder of Digital Currency Group. “So behind the scenes, nobody has slowed down.”

As a result, there has been an increase in the number of enterprise companies adopting blockchain platforms. As a few of numerous examples, Walmart is having its perishable food suppliers populate a blockchain database to rapidly pinpoint contamination, Maersk and IBM are launching a blockchain shipping supply platform, and a major retail company looking to upstage Amazon in terms of utilizing the blockchain to reduce costs and improve efficiencies across the supply chain, thus passing on the savings to both retailers who wish to join their sales platform and the customer who would be economically incentivized to buy from them simply because they would save money buying through them vs. a juggernaut such as Amazon.

Further, ICOs continue to evolve such as the latest wave of STO ICOs which are looking to launch next year. These are ICOs backed by something tangible such as hard assets, thus address the commonly heard complaint that many ICOs are built on vapor.

Meanwhile, a bitcoin ETF may not be approved by the SEC until sometime in 2019, but when it launches, it will mark a significant milestone. If we compare this with gold's first ETF, GLD, which enabled the average investor to invest in gold, the effects on the price of bitcoin may be pronounced. “We can certainly track the growth of gold ETFs since their invention, and see how investor interest in gold has growth significantly,” said Will Rhind, managing director of U.S. operations for ETF Securities.

Before the first gold ETF, investors could not invest in gold easily, said Rhind. They could buy coins or bars, but due to the costs of storage and acquisition, “it was really a market for specialists,” and investing in gold was “not at all liquid, transparent or efficient.”

Tom Lydon, the editor and published of ETFtrends.com has said, “Gold has proved itself as a portfolio diversifier and a foundational asset rather than just a trading vehicle. Gold ETFs now rival central banks in holdings." Lydon went on to note that physically-backed gold ETFs as a group are the fourth-largest holder of gold, falling just behind the U.S., Germany, and the International Monetary Fund.

The alignment of institutions with bitcoin and the blockchain space as a whole in building out the infrastructure will enable institutional and retail investment by simplifying the process of buying bitcoin and eventually other forms of crypto, plus the liquidity that a bitcoin ETF would provide should help accelerate bitcoin's hash rate which continues to grow by leaps and bounds despite this year's crypto winter as shown in the graph below.

Additionally, the ability of bitcoin to enable p2p transactions for the billions of unbanked, allowing them to transact value for the first time via cheap mobile phones, will help third world countries leapfrog traditional banks, much as millions in Asian countries leapfrogged wired telecom. Further, the success of the Lightning Network, Liquid Sidechains, and Rootstock which enables companies to build on the bitcoin blockchain and port over those companies that have built on the inferior, less secure ethereum blockchain, should help price recovery in bitcoin over the next couple of years.

That said, my various metrics which, when taken together, has called major tops and bottoms in bitcoin, still suggest bitcoin has not reached a major bottom just yet. But given the speed and depth of the recent price collapse, this major bottom may come sooner than expected as shown in one of my favorite indicators of value shown below. 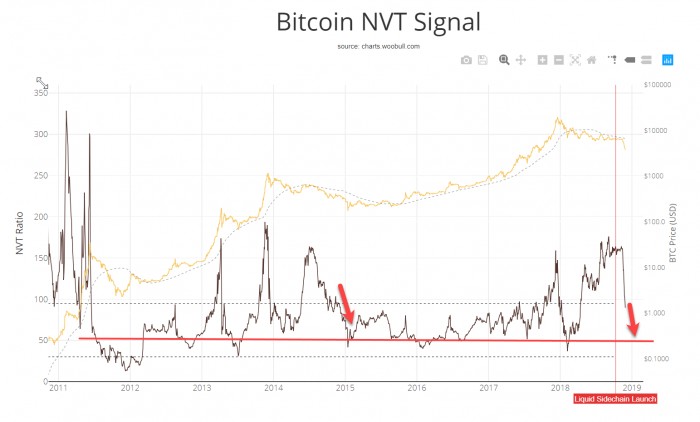 If we compare the NVT signal line with its movement in 2014, it may only take another 2-3 months for the NVT Signal to fall below the red line as it did from late 2014 to Jan-2015. Of course, it is possible bitcoin may meander around in a choppy sloppy fashion for a couple of months before rolling over again.

Remember, crypto bear markets can last longer than people expect as the prior bear lasted 14 months from peak-to-trough, then took nearly another 2 years to reach old highs around 1150.

Also, just as in 2014, 2017 was fraught with bearish crypto news (thanks to CoinMarketCap for this comprehensive news chart vs. price of bitcoin):

Yet despite the onerous bear market, transactions continue to rise across major cryptocurrencies (data courtesy of CoinMetrics):

And dApps usage continues to grow:

For those who don't know, dApps which are decentralized applications have a broad spectrum of functionality. They can be used to facilitate p2p transactions such as in value exchange on the growing number of decentralized crypto exchanges. They can also combine value with information from outside the blockchain. For example, in the derivatives market, a farmer buys a derivative that automatically pays out if there’s a drought that impacts his work.

What could prevent bitcoin from heading lower, but instead start on a new bull run before my various metrics signal a major bottom? A major tailwind catalyst such as the approval of a bitcoin ETF or a contagion of investment institutions creating platform infrastructure for bitcoin which enables substantial investment into bitcoin. This would be the first time this happened if such were to occur without my metrics signalling a major bottom. But always remember, markets change, so some tried-and-true metrics will eventually expire, thus one must always stay vigilant to remain ahead of the curve in terms of technical and fundamental analysis. There is no free lunch, nor 'get rich quick' schemes.
Like what you read?
Let us help you make sense of these markets by signing up for our free Market Lab Reports:
This information is provided by MoKa Investors, LLC DBA Virtue of Selfish Investing (VoSI) is issued solely for informational purposes and does not constitute an offer to sell or a solicitation of an offer to buy securities. Information contained herein is based on sources which we believe to be reliable but is not guaranteed by us as being accurate and does not purport to be a complete statement or summary of available data. VoSI reports are intended to alert VoSI members to technical developments in certain securities that may or may not be actionable, only, and are not intended as recommendations. Past performance is not a guarantee, nor is it necessarily indicative, of future results. Opinions expressed herein are statements of our judgment as of the publication date and are subject to change without notice. Entities including but not limited to VoSI, its members, officers, directors, employees, customers, agents, and affiliates may have a position, long or short, in the securities referred to herein, and/or other related securities, and may increase or decrease such position or take a contra position. Additional information is available upon written request. This publication is for clients of Virtue of Selfish Investing. Reproduction without written permission is strictly prohibited and will be prosecuted to the full extent of the law. ©2022 MoKa Investors, LLC DBA Virtue of Selfish Investing. All rights reserved.
FOR OUR FREE MARKET LAB REPORT :