While brief developments on Brexit and the trade war pushed U.S. markets back toward old highs, the overall environment remains hugely news driven. QE pushes markets higher on a string while leading stocks continue to lag and trade war issues as well as Brexit remain in flux. Meanwhile, the global economy remains teetering on recession. All of this accounts for the go-nowhere sloppy action in the major indices since August.

China’s economy continues to struggle with data showing producer prices dropped 1.2% on the year in September, the biggest drop since 2016 and a further indication of factories being hit by the country’s trade dispute with the U.S. Beijing has instructed its central bank to keep credit to companies flowing to cope with the slowdown. Total social financing, the country’s broadest measure of credit, rose much faster than expectations in September, while yuan lending rose 12.5% on the year.

Over in Europe, Brexit concerns finally caught up with the U.K.’s labor market. Employment fell by 56,000 in the three months through August. Germany’s ZEW index, the first big sentiment indicator of the month out of Europe, hit its lowest level since 2010.

The end of gold-backed fiat in 1971 ushered in the era of great debt where credit could be endlessly expanded, but not of course without dire consequences. This credit expansion which is controlled by central banks became known as quantitative easing, or QE. The financial collapse of 2008 launched QE in full measure to where the world finds itself at record levels of debt and the lowest rates of interest in 5000 years (as shown below). Rates back in 2008 could be lowered which gave central banks more time to further kick the debt-laden can down the road. 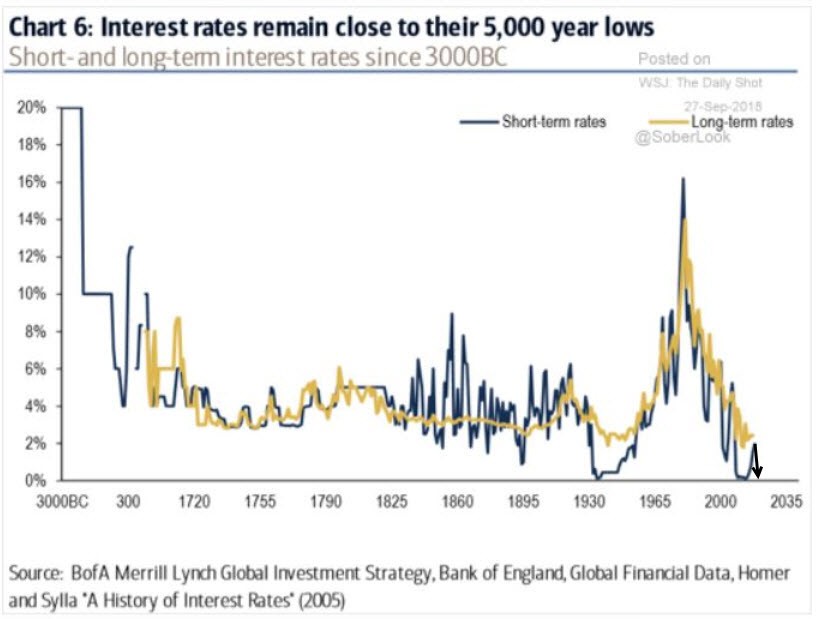 Would you pay someone to loan them money?

With rates currently at some of the lowest levels in history, when the next recession hits, central banks will have little to no ammunition to spur the economy. The massive sovereign debt bubble cannot be shrunk without serious levels of inflation which suggests far greater levels of QE, thus far greater levels of the debasement of *all* currencies including fiat.

So far, the prices of real estate, gold, stocks, and bitcoin have greatly appreciated as a consequence of QE. As I have written in prior articles, all should continue to benefit as long as QE remains flowing. Should a credit crunch, ie, recession, occur such as observed in 2008 or in prior recessions, both stocks and real estate will suffer price drops. However, keep in mind that even though all assets plunged in price after the crash of 2008, gold was the first asset to bounce sharply and hit new highs as scared capital rushed into the precious metal which has been known as the "fear" trade. 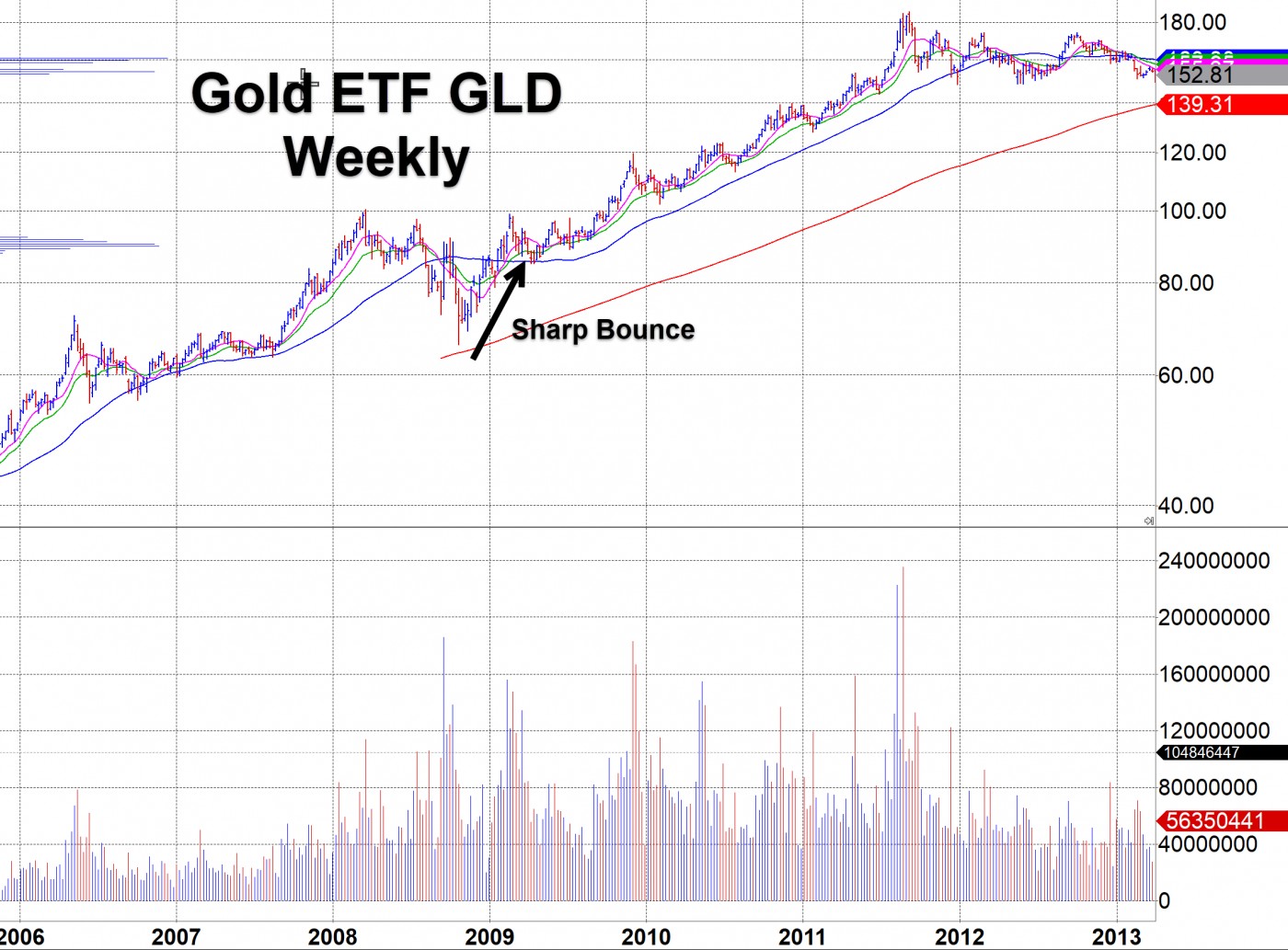 Bitcoin to Overtake Gold as SoV?

Of course, gold was the only store of value recognized by the world at that time. Bitcoin did not yet exist and only recently is finally gaining sufficient institutional traction through listings on major platforms such as the CME and ICE's Bakkt. ICE also owns the New York Stock Exchange. Keep in mind that both bitcoin and blockchain are still in infancy on the slightly sloped part of the S-curve as usage is still a minuscule 0.5% to 1.0%, depending on which metrics are used. That said, usage doubles every year as both are exponentially growing technologies. 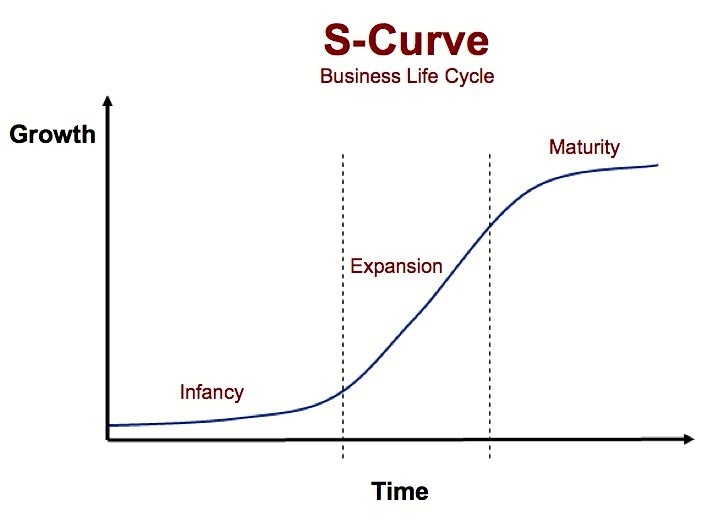 When the Next Recession Hits...

As a consequence, when the next recession hits, bitcoin is likely to be a beneficiary along with gold as capital seeking safe harbor rushes into both vehicles. That said, bitcoin has a fixed supply so cannot be inflated away and is superior to gold as it is private, secure, and censorship resistant. Further, bitcoin is on a disinflationary supply schedule while the global supply of gold has increased by 1-2% annually over the last century. Bitcoin could thus experience a far greater rise in price relative to gold, not to mention the ongoing tailwinds that have helped bitcoin achieve the greatest price rise in the history of speculation.

Even central bankers such as the Bank of England's Mark Carney are starting to wake up to the use of cryptocurrencies such as bitcoin for peer-to-peer value transfer as he recently questioned the dollar's status as a reserve currency. Traditionally, when one country sells a product to another country, that country often uses U.S. dollars. But a growing number of countries may instead start using cryptocurrencies such as bitcoin for such transactions. Cryptocurrency price fluctuation risk can be removed by immediately converting the cryptocurrency into fiat once the transaction is settled.

If history is any guide, most big money and retail investors overlook the potential behind exponentially growing technologies. Such is the nature of S-curve technologies and explains why most were not buyers of bitcoin or ethereum in prior years. And as the world drives deeper into debt, the greater the disruptive potential behind such technologies since they serve a growing and urgent need. Singularly, the scaling potential behind bitcoin and ethereum as both evolve will certainly propel them to new heights. A few years ago, dozens of projects were being built but all had a limited chance of going live. Today, there are various key technologies applied to layer 0 and layer 2 of bitcoin that do not sacrifice privacy which are highly likely to go live within the next couple of years that will increase bitcoin's and ethereum's scalabilities by orders of magnitude.

On topic, the phrase "In God We Trust" is printed on USD fiat. No vehicles or platforms in science or engineering have this inscription. Do particle accelerators, electrophoresis gels, SIM chips need such an inscription? Currency, properly designed, will not be based on faith but on science. So far, this is true of bitcoin.

The % of the world using the internet in 1995 stood at 0.4%. Today, the majority use the internet. Even third world countries are starting to transact value by way of cheap mobile phones. Bitcoin facilitates borderless transfer of value just as the internet facilitates the borderless flow of information. The % of people using bitcoin today is close to the % who used the internet in 1995. So if you think bitcoin's price is too high, think again. That said, as always, know bitcoin is hugely volatile so could easily retest prior intermediate lows. Keep your position sizes in alignment with your risk tolerance levels.
Like what you read?
Let us help you make sense of these markets by signing up for our free Market Lab Reports:
This information is provided by MoKa Investors, LLC DBA Virtue of Selfish Investing (VoSI) is issued solely for informational purposes and does not constitute an offer to sell or a solicitation of an offer to buy securities. Information contained herein is based on sources which we believe to be reliable but is not guaranteed by us as being accurate and does not purport to be a complete statement or summary of available data. VoSI reports are intended to alert VoSI members to technical developments in certain securities that may or may not be actionable, only, and are not intended as recommendations. Past performance is not a guarantee, nor is it necessarily indicative, of future results. Opinions expressed herein are statements of our judgment as of the publication date and are subject to change without notice. Entities including but not limited to VoSI, its members, officers, directors, employees, customers, agents, and affiliates may have a position, long or short, in the securities referred to herein, and/or other related securities, and may increase or decrease such position or take a contra position. Additional information is available upon written request. This publication is for clients of Virtue of Selfish Investing. Reproduction without written permission is strictly prohibited and will be prosecuted to the full extent of the law. ©2023 MoKa Investors, LLC DBA Virtue of Selfish Investing. All rights reserved.
FOR OUR FREE MARKET LAB REPORT :