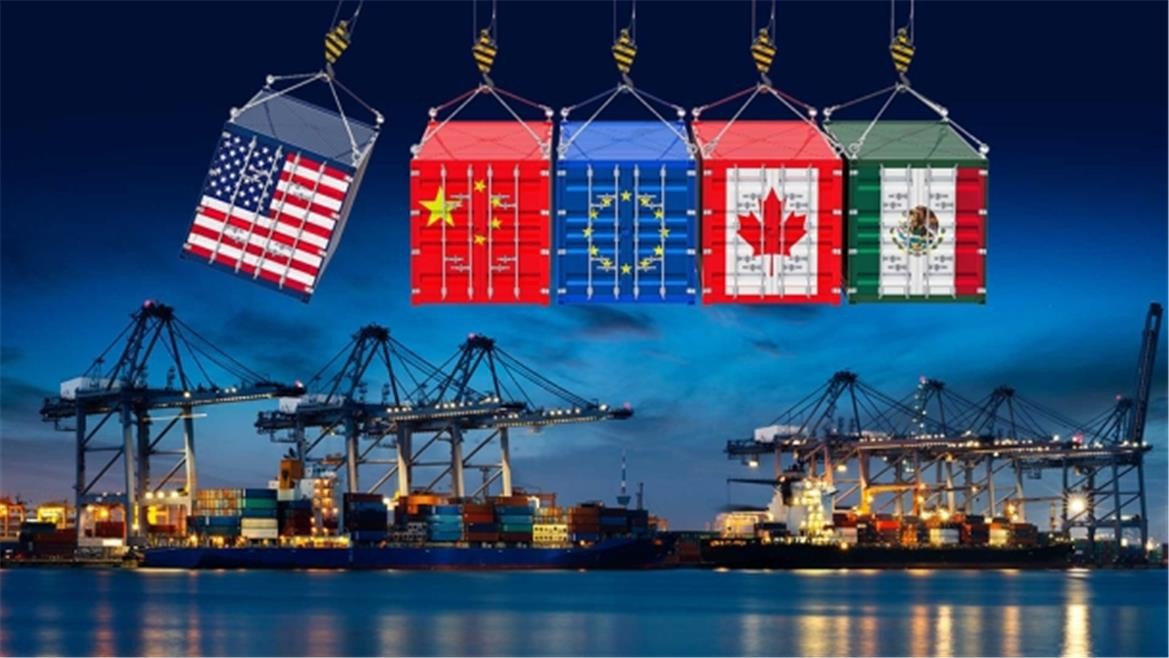 We have discussed how the CPI has been manipulated thus not a true measure of typical living costs. That said, the price of technology continues to flatline as the price of a product range of laptops, mobile phones, and flat screens remain similar over the last couple of decades. A good home computer cost about $2000 in the early 80s. Today, the costs remains equivalent. So while the price of technology remains stable while continuing to evolve, this further widens the divide between the haves and have-nots as the haves can withstand rising prices in the basics such as food, electricity, transportation, and housing while enjoying the benefits of the latest technologies. This accounts for the rise in populism not seen since the 1930s.

As the U.S. and U.K. both move in tandem in many regards, it comes as no surprise that the Bank of England reports CPI inflation that grossly underestimates REAL inflation, which is why most prefer the RPI measure, but the government has been phasing this out over the past decade as it plans to change RPI methodology to the point where it closely matches CPI. But even the RPI underestimates real inflation in the U.K.

The jobs report came in well ahead of expectations with the U.S. adding 260,000 jobs in November, well ahead of the 180,000 expected, and unemployment down to -3.5%, a 50-year low. This seems contradictory to reality.

As we know, the U.S. does not count those who have given up looking for work as part of the unemployed. In a similar manner, over in the U.K., the official unemployment statistics have been manipulated lower by successive governments all the way to the point that on their own they are pretty much meaningless. For instance there are over 8.6 million people of working age who are "economically inactive" which is just another word for unemployed. Given Britain's total population of 66 million, this is a sizable percentage.

Then back in the U.S., its manufacturing sector remained in contraction for the fourth straight month, with the Institute for Supply Management’s purchasing manager’s index unexpectedly fell to 48.1% in November from 48.3% in October. Economists polled by MarketWatch expected a reading of 49.2%. Readings below 50% reflect business conditions worsening.

To add insult to injury, Trump says he may not do a trade deal with China until after next year's election. Then last Tuesday, the House of Representatives passed another bill raising scrutiny of China's domestic human rights record. This bill is similar to the one passed on China's activities in Hong Kong. Beijing reacted angrily and reiterated that it wants all tariffs imposed since 2018 rescinded, directly contradicting Trump's comments that phase-1 "cannot be an even deal." In ten days, a new round of U.S. tariffs kick in on about $156 billion worth of Chinese imports annually.

Meanwhile, the French government said it would retaliate against Trump's decision to impose tariffs of up to 100% on $2.4 billion of French goods, a retaliatory measure against France's tax on digital services that affect mainly U.S. technology giants such as AMZN and FB. But it doesn't end there. The U.S. could end up imposing tariffs on other countries as well such as Italy, Austria, and Turkey, all whom tax digital services. With trade issues escalating, this is becoming more and more reminiscent of the 1930s. In 1930, the Smoot-Hawley Tariffs began a trade war spurring other countries to issue various tariffs. This all served to cripple economies, lengthening and deepening the Great Depression.

With global recession an ongoing threat and the trade talks at yet another impasse, expect QE to increase while interest rates drive lower. Japan launched its biggest fiscal package in three years hoping to lift its economy. It has been hit by the Chinese slowdown as well as its own trade war with South Korea.

Hard assets, stocks, precious metals, and bitcoin are beneficiaries thus expect them to remain on overall bullish albeit sloppily priced trends while susceptible to the correction within the context of an overall bull market. Gold may be on the rise once again as it rounds out its base despite the strong jobs report last Friday. As we have discussed, gold in all its forms whether it is gold ETF GLD, gold miners GDX, or gold junior miners GDXJ have a high degree of correlation. Silver which has been lagging gold over the last several years may catch up. 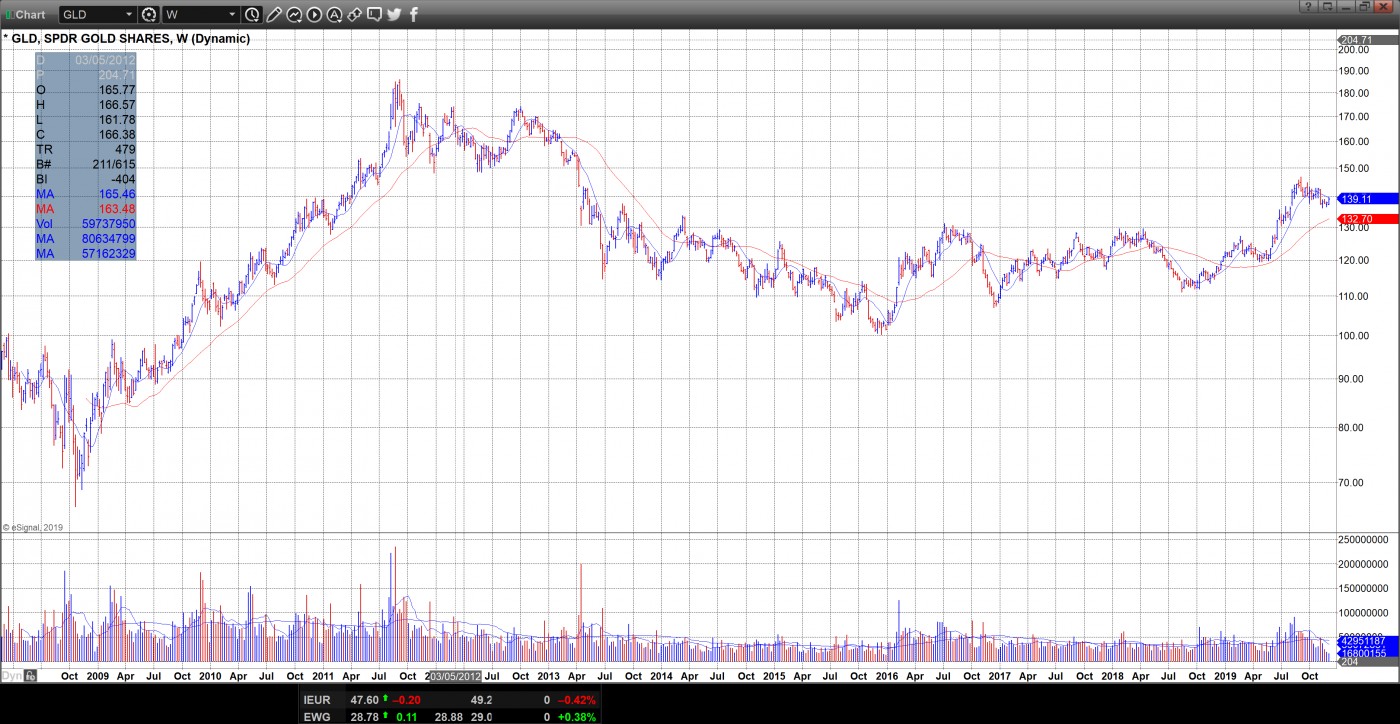 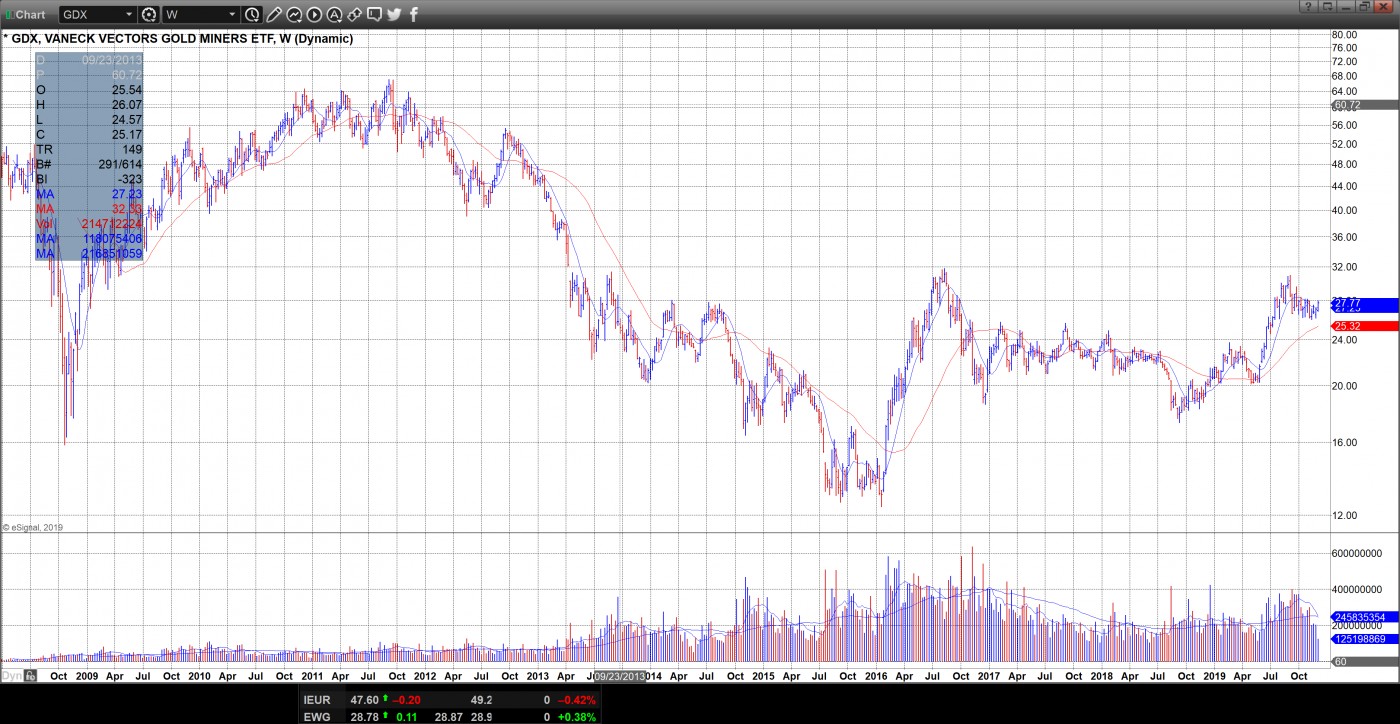 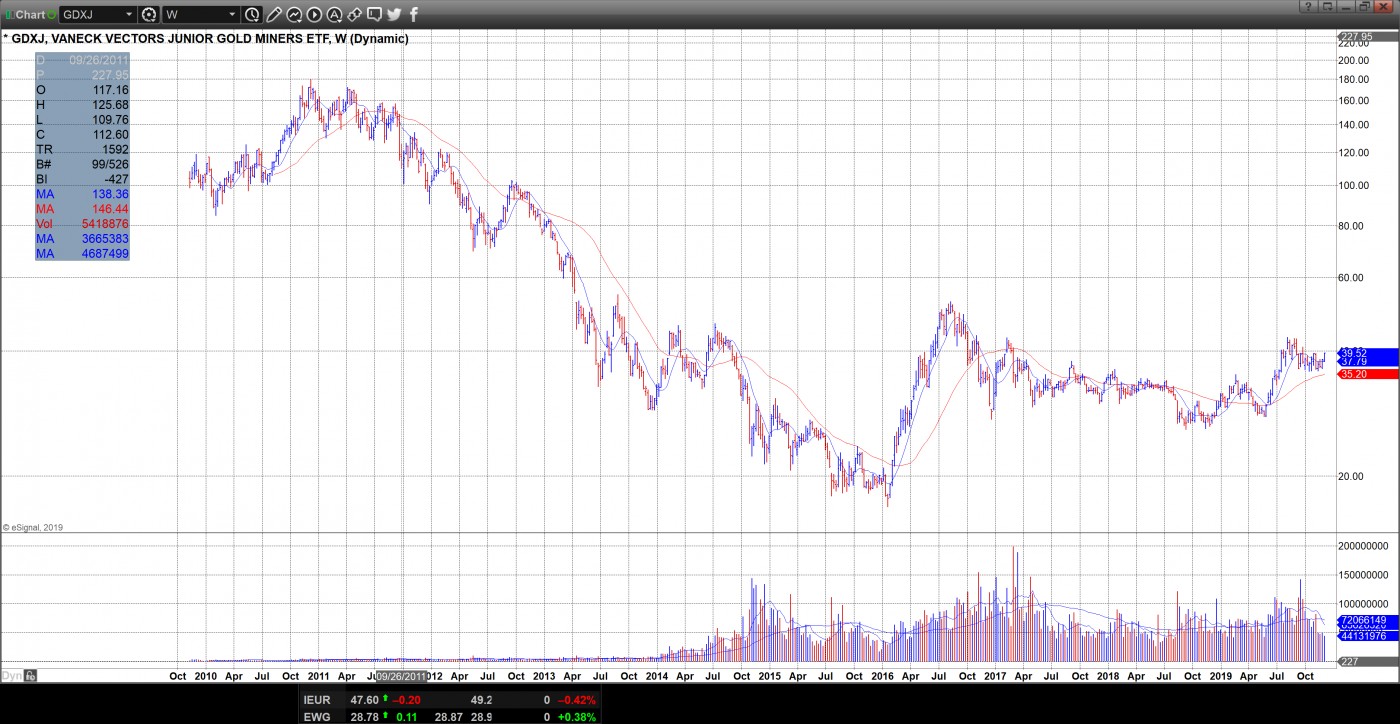 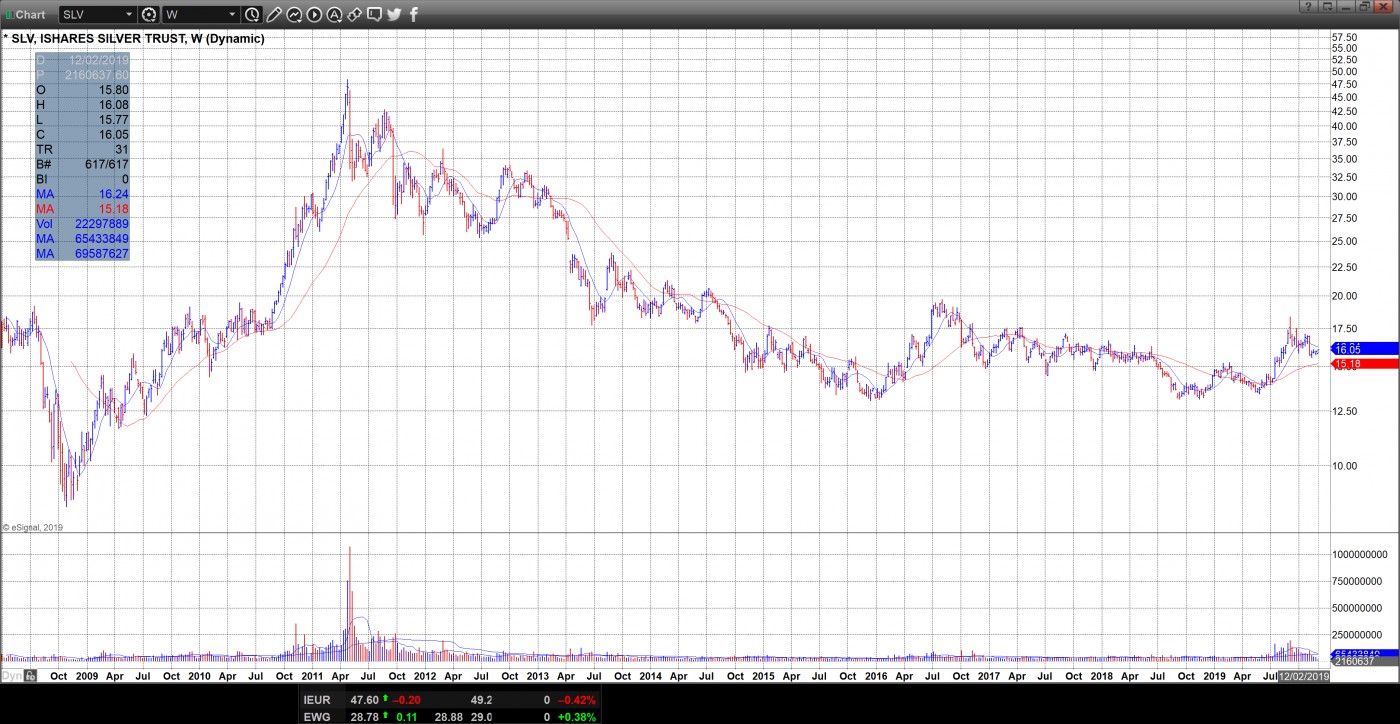 Allegations of Bitcoin Price Manipulation by One Whale

I wanted to discuss claims of price manipulation that applies to both stock and crypto markets. A study came out recently implying bitcoin's price rise in 2017 to nearly $20,000 was due to one trader manipulating it higher using Tether which is at least partially backed by the U.S. dollar, suggesting bitcoin has risen on vapor. Over the years, many claims have been made that bitcoin is being manipulated by one or two whales, ie, individuals who hold a huge number of bitcoin. This claim is made over the course of an entire bull market. None have ever been proven.

In prior bubbles over the last few centuries, it was a combination of the ‘madness of crowds’ that created dramatic rises in price and thus the bubble. In trending markets, more traders and investors jump on board to ride the trend. It is the natural cause-and-effect of human psychology which helps spur the trend. It is never just one person moving the market higher (or lower).

Similar claims have been made in other markets including the dot-com boom of the late 1990s against companies such as Amazon (AMZN) whose dramatic ascent in price defied logic, since AMZN had zero earnings and had earnings projections of zero out to a few years. Manipulation by a sole individual can only occur for so long as fundamentals eventually catch up with and thus affect price.

Tether officials said, “The authors do not possess or reference any data disputing that Tether has sufficient reserves to back up Tether token issuances in circulation. To reduce the spike in the bitcoin price in 2017 to such simplistic terms is facile. It is also an insult to the millions of people in our community that believe in the sound principles governing the digital currency economy.”

John Griffin, one of the two authors of the study, rebutted by saying, “A common theme throughout history of all fraudsters is that they attack their accusers instead of admitting the fraud. I’m used to it by now.” Griffin’s statement is illogical as he basically is saying if you defend yourself, you are fraudulent. If you admit the fraud, you are fraudulent. Nice Catch-22. QED? LOL.

In the final analysis, every market is ‘manipulated’. Everybody tweeting something about the price of a certain asset is ‘manipulating’ the market. Every news article for or against bitcoin is manipulating the market. A single manipulator could fuel the trend by adding to his position on the way up. But this does not mean he is the only one driving the price higher. If he is wrong, the trend will reverse at some point as fundamentals win out in the end. Even on a short term basis, if one whale drives up the price of a cryptocurrency or stock too far, sellers come in and drive the price down.

As with stocks, bitcoin is a free market. If it did not have real utility or value for people, it would have collapsed to zero after the first of many bubbles blew apart years ago. The reality is there is a fixed supply of bitcoin. Increasing demand for numerous reasons such as ones I cite in my other articles means the price of bitcoin will continue its dramatic ascent. Indeed, $1 in bitcoin in 2009 is worth nearly $10 million today. Nothing in the history of speculation even compares. With global debt at record levels, interest rates near record lows, and $18 trillion in negatively yielding debt, old guard methods of storing value are no longer safe. Bank accounts and bonds are no longer the safe havens they once were as debasement continues across all currencies, further catalyzing the need for a store of value that cannot be inflated away. Bitcoin is ultimately better than gold for numerous reasons I've discussed in prior reports, and despite its pullback, bitcoin's hash rate continues to mark new highs.