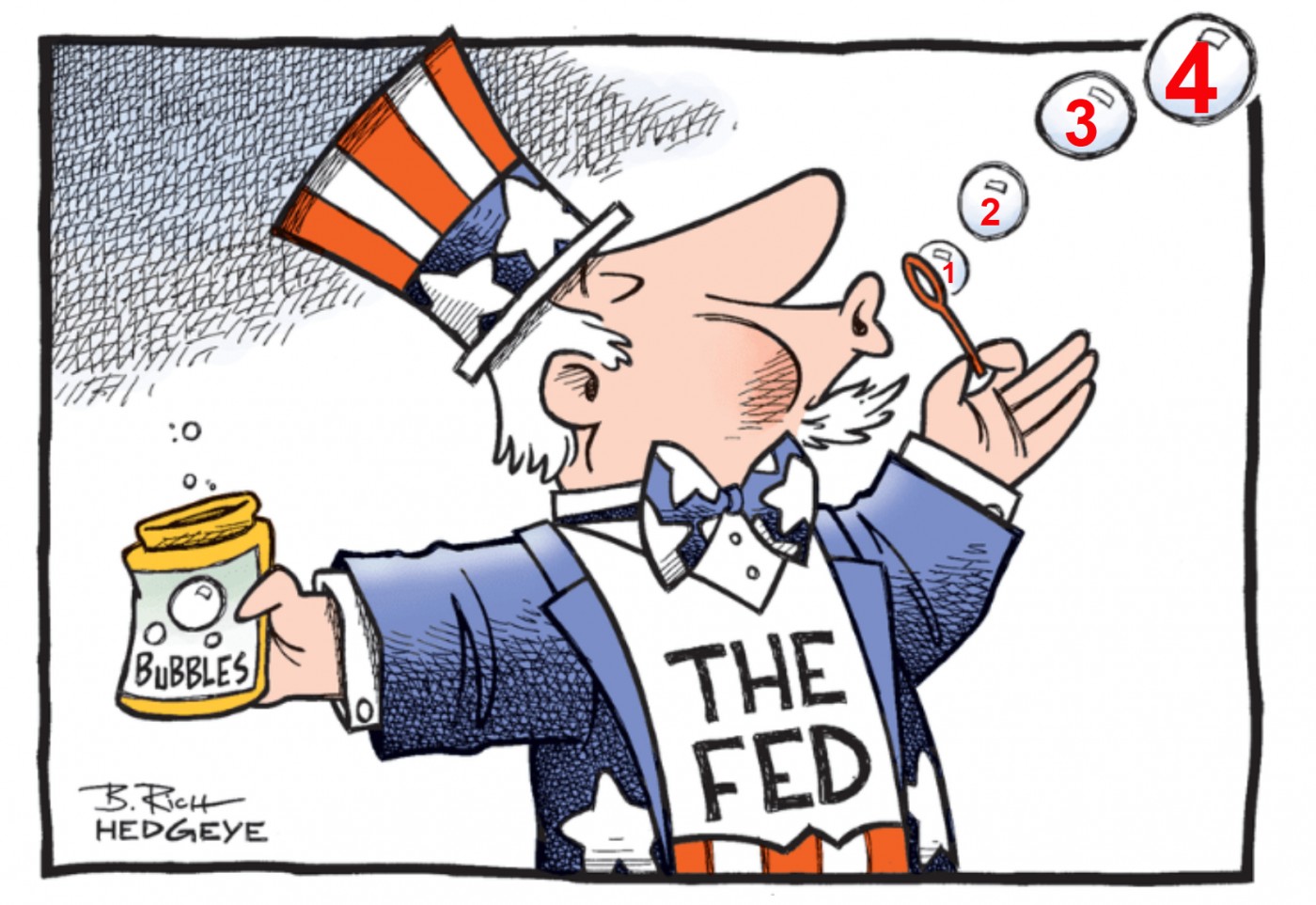 (Image courtesy of B. Rich of Hedgeye with edits by Dr. Chris Kacher aka Dr K)
Welcome to "Not-QE", ie, QE4

Despite the Federal Reserve's declarations that they have not restarted QE, reality seems to disagree. In October, the Fed's assets grew by over $162 billion to register the biggest monthly rise since 2008. Everything is fine though

Further, $270 billion has been reportedly added to the balance sheet since Sep 11, which implies an average daily growth rate of $5.8 billion. As of Nov 15, the Fed’s total assets were $4.04 trillion, according to the Federal Reserve Bank of St. Louis.

In the end, it's just semantics. The increase in the Fed's balance sheet and the $270 billion added since Sep 11 is inevitably helping to lift the prices of assets.

The confluence of lower interest rates, more QE, and the miners' reward halving in May 2020 are nice rocket boosters for bitcoin. The bitcoin halving reduces supply expansion by 50%, in contrast to central banks which expand the money supply. The U.S. Federal Reserve has expanded the money supply by $2 trillion since 2008. That's 2 trillion reasons to own bitcoin and hard assets.

The Cantillon Effect refers to the change in relative prices resulting from an increase in the money supply. It argues that money injection (QE and other inflation-boosting policies) may not change an economy’s output over the long-term. Indeed, global stagnation underscores this point as well as Ray Dalio of Bridgewater who has pointed out that capital often gets hoarded by the 'haves' as they already have achieved sufficiency. Dalio agrees additional QE should be pushed into the hands of the less fortunate who will spend it as well as into economically beneficial programs such as small business or education.

Driving populism which is the growing divide between the haves and have-nots, people who are most invested in the stock market and real estate are the first to benefit from QE. We have had more than a decade of QE which explains the rise in populism not seen since the 1930s. Meanwhile, those less fortunate who sit with scant savings don't even earn much, or worse, see their savings erode if their account is one of the growing number of negative interest bearing accounts, especially in major countries such as Germany and Japan. Even those in the U.S. or the U.K see their dollars and pounds worth less as the price of hard assets and basics continue to rise. So saving is no longer safe. Fiat is unsuitable for long-term savings.

Gabor Gurbacs, digital asset strategist/director at VanEck has said that both bitcoin and gold could benefit from QE-led dollar devaluation and asset inflation. According to Gurbacs, “Central banks expanding their balance sheets is quantitative easing in disguise. In effect, central banks buy government bonds and expand the repo market program with the intent to keep money markets in check. Bitcoin and gold may provide an alternative to and potentially a hedge against catastrophic failures in such heavily controlled central banking systems.”

Even though bitcoin is hugely volatile, its overall volatility has diminished with each passing bull and bear cycle as shown in the chart below. And let’s not forget that gold, a classic safe-haven asset, rose from $800 to $1,921 in the three years to 2011 only to lose nearly 50% as it fell back to $1,050 by December 2015. Volatility much?

Despite QE, the global economy is growing at the slowest pace since the financial crisis in 2008 according to the Organisation for Economic Cooperation and Development (OECD). Central banks have tried to revive investment but the world economy is projected to grow by a decade-low 2.9% this year and next. The OECD said growth may edge up to 3.0% in 2021 but only if a number of risks including the trade wars and the unexpectedly sharp Chinese slowdown are contained.

The pressure on China’s economy from U.S. tariffs was evident as industrial profits fell 9.9% on the year in October. This was the sharpest drop since China started compiling the data in 2011. Trump is liable to play hard ball as a consequence which may further stall any meaningful resolutions despite his carefully hedged comments that the two countries are in the “final throes” of talks to secure a ‘phase-1’ deal to de-escalate the trade war.

As world economies struggle, a paradigm shift is occurring that includes the digitalization of economies which will ultimately be a bullish event, especially for bitcoin and blockchain/crypto as a whole, but in the meantime, the transition is not an easy one for the old guard which puts further pressure on the global economy. “It would be a policy mistake to consider these shifts as temporary factors that can be addressed with monetary or fiscal policy: they are structural,” OECD chief economist Laurence Boone wrote in the report. Ray Dalio has echoed such sentiments in his writings.

Rates to 0% and Below

U.S. growth was forecast at 2.3% this year, trimmed from 2.4% in September as the fiscal advantage from a 2017 tax cut waned while the trade wars drag on. With the world’s biggest economy seen growing 2.0% in 2020 and 2021, the OECD said further interest rate cuts would be warranted if growth turned weaker. This suggests that the already low levels will go to 0% as renowned investor Stanley Druckenmiller has predicted with his own money while negative rates will drop even deeper into negative territory. Yikes.

Historically low-interest rates, savings account yielding close to zero or negative, and $18 trillion in negatively yielding bonds underscore the need to move money into alternative investments as suggested by renowned investors such as Ray Dalio, Jim Rogers, et al who hold noteworthy lifetime track records. Bitcoin as well as companies that tokenize assets bring a key alternative to the market by allowing retail money to invest in formerly illiquid areas in the form of liquid, tradeable, tokenized assets such as real estate. But such is still in formation as regulations must catch up to the technology of tokenization.

Here’s a report I sent to members recently that helps steer investors into what has already been and I continue to believe will be investments with superior risk/reward going forward.