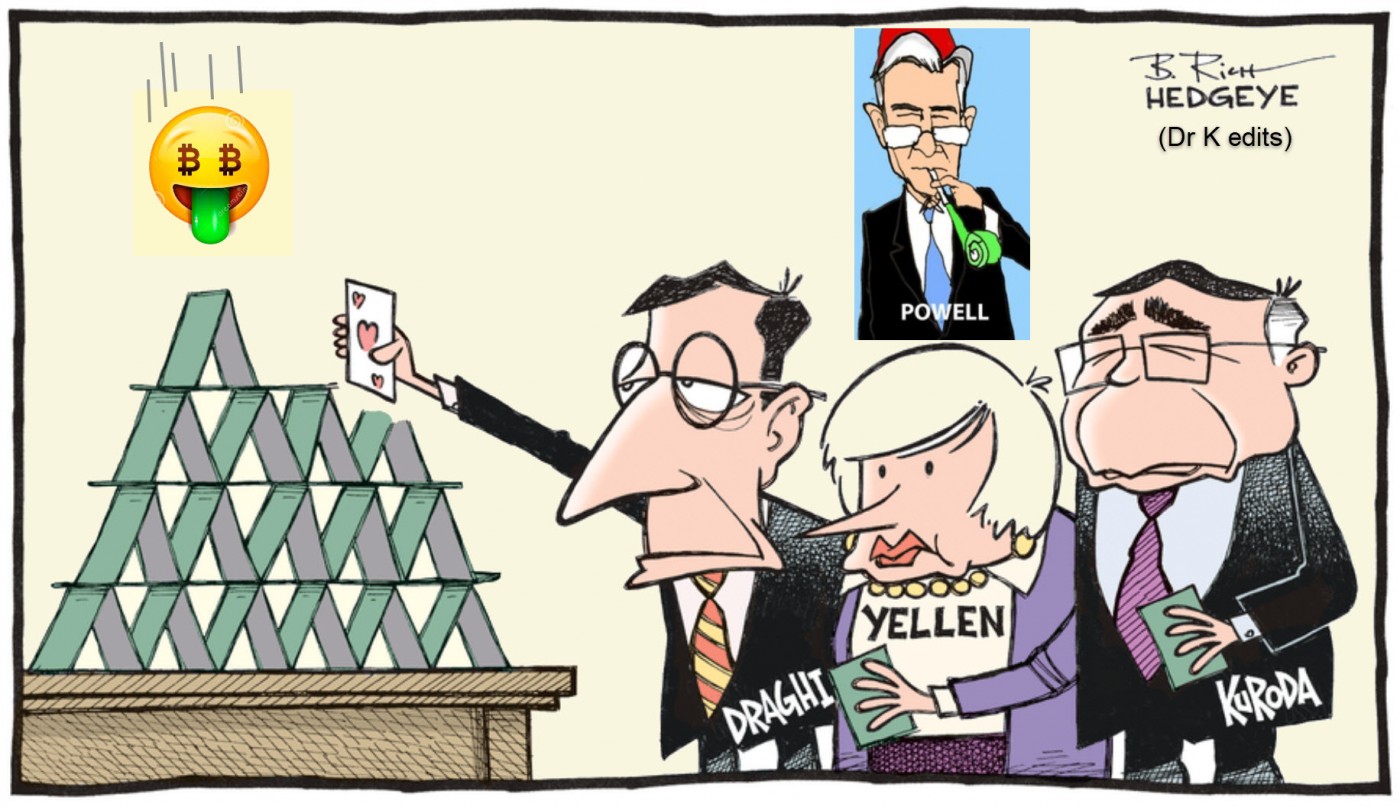 
These issues push central banks toward increased levels of QE. While easy money is stimulative, too much can wreck the financial system as history has shown time and time again. Too much of a currency always leads to a crash and burn. Since QE began a decade ago, new debt-based capital was used to buy assets, private equity, and real estate while lower interest rates led to record levels of stock buybacks and acquisitions. Every time the Fed tried to tighten, "taper tantrums" resulted with the stock market correcting by as much as -20% forcing the Fed's hand to continue to print. Nevertheless, the efficacy of QE is approaching its limit as interest rates cant go much lower. But as long as QE continues, the prices of hard assets will continue to rise as fiat continues to devalue. SoV (store-of-value) assets such as precious metals and bitcoin get an added boost as we have been witnessing. The lower rates go, the more investors will move capital into hard assets. The fear trade of escalating global crises including the trade wars will further boost precious metals and bitcoin.

Meanwhile, various colossal liabilities such as pension and healthcare will reach a point where payments can no longer be serviced. This will move the world closer to an outright devaluation of fiat much as happened in the 1930s via the readjustment of the price of gold from $20.67 to $35. This will further increase the distance between the capitalist haves and the socialist have-nots which already stand at record differences. The more hard assets one holds, the more one tends to be in the camp of the 'haves'. Social unrest between the capitalists and socialists will deepen while conflicts between the U.S. and China on how to grab a larger piece of the economic pie will intensify as China seeks pole position as the world's economic powerhouse.

By this time, the risk in holding cash and bonds will have pushed substantial capital into hard assets including store-of-value vehicles such as bitcoin and gold.

Bank valuations in the EU are not looking so good: 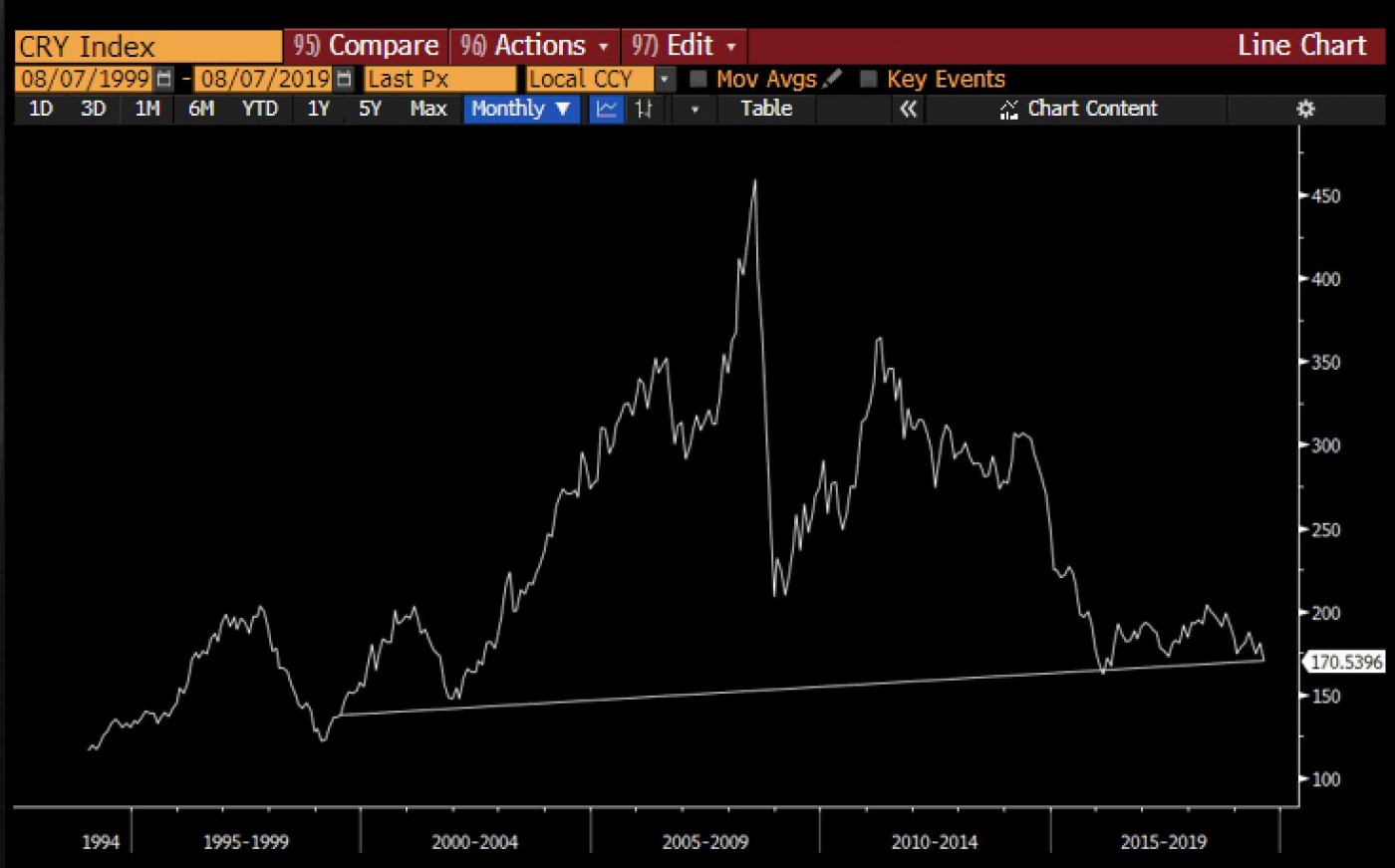 Bloomberg JPM Asia-Dollar Index (ADXY) is also at a tipping point as strength in the dollar soars to multi-year highs: 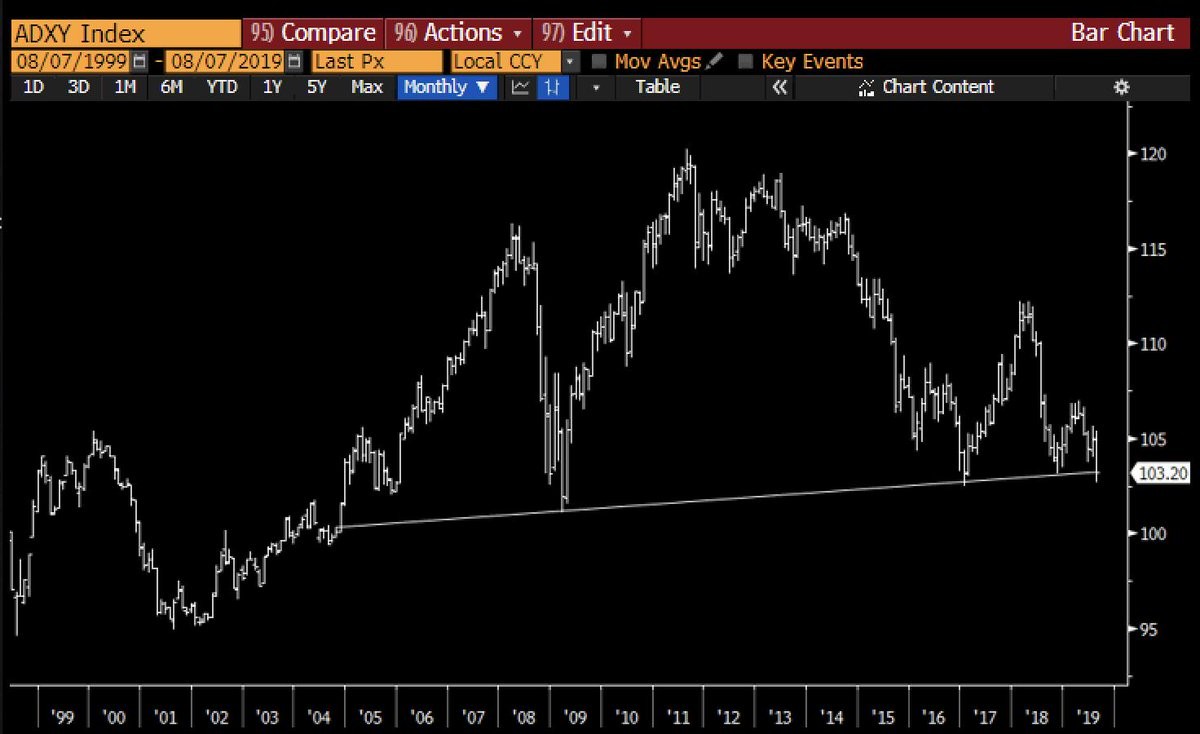 Meanwhile, Germany’s economy shrank by 0.1% in the second quarter for the first time since 2013 due to a slump in exports stoking fears of recession: 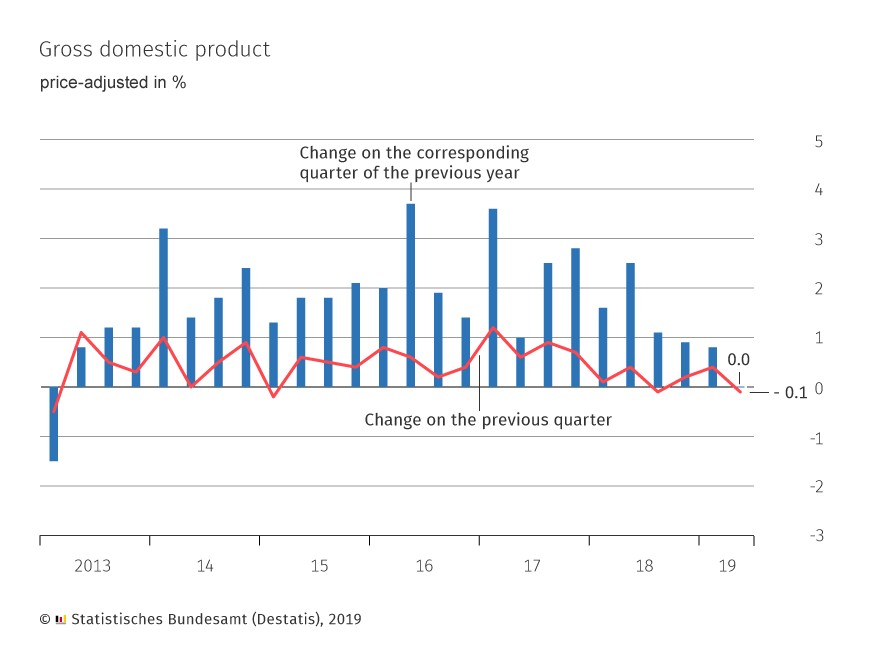 The U.S. dollar’s 17 year high against a major basket of currencies is forcing global central banks to be even more accommodative than the U.S. Federal Reserve. As shown above, some currencies, banks, and yields are assuming the brace position.

One of the primary causes of the Great Depression was the Smoot-Hawley tariff which put a 50% tax on imported goods, stalling trade. Given the U.S.-China trade war, could we witness the reincarnation of Smoot-Hawley ? China has a long history of standing tough with the U.S. and other countries when it comes to what they believe is economic "justice". Meanwhile, Trump knows he holds the cards with respect to forcing the Fed's hand to further lower rates should the U.S. stock market turn ugly. QE is like pouring gasoline on a fire but it has to burn out at some point.

But while others lose their heads, lower taxes together with exponential technologies (ExpoTech) can reverse the trend. And we have Trump, not FDR, at the helm. Indeed, these are fascinating times to watch which mega trend / paradigm shift wins.

That said, the projected returns of $15 trillion in bonds are now negative thus are below the projected returns of cash. This will impede the effective growth of credit and other forms of capital, which will cause already faltering global economies to slow down or go in reverse unless pro-business policies via Trump and ExpoTech can overcome this. Will the potentially rising tide of continued growth in the U.S., if it is to continue, lift the ships in other countries given the increasing levels of nationalism and isolationism? The world is witnessing levels of populism not seen since the 1930s.

Meanwhile, expected returns and risk premiums of non-cash assets are being driven down toward the cash return, so why buy them? As a consequence, it will become more difficult to push their prices up. Bond yields can only go so low. A weekly chart of the 20+ year bond ETF TLT shows skyrocketing moves over the last 3 weeks: 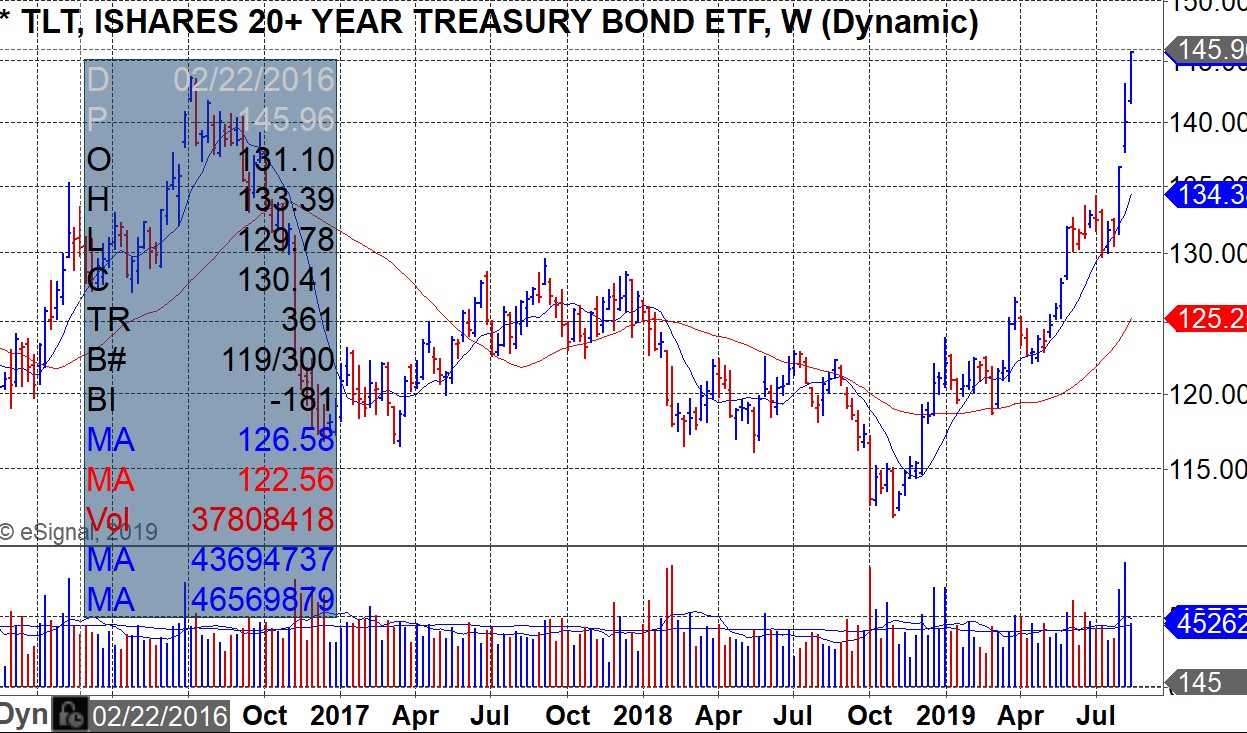 At the same time, central banks doing more of this printing and buying of assets will produce more negative real and nominal returns that will lead investors to increasingly prefer alternative forms of money (bitcoin, gold, silver) or other storeholds of wealth (real estate, stocks). The price rise in all of these vehicles is no coincidence.

The following three charts show when interest rates hit 0%, the monetary base soars from the money printed. The U.S. ended its QE program first, then the ECB ended its QE program at the end of 2018, while the BoJ is still increasing the money supply. Now, all three central banks will have to print again as growth is slowing and inflation remains below target levels. 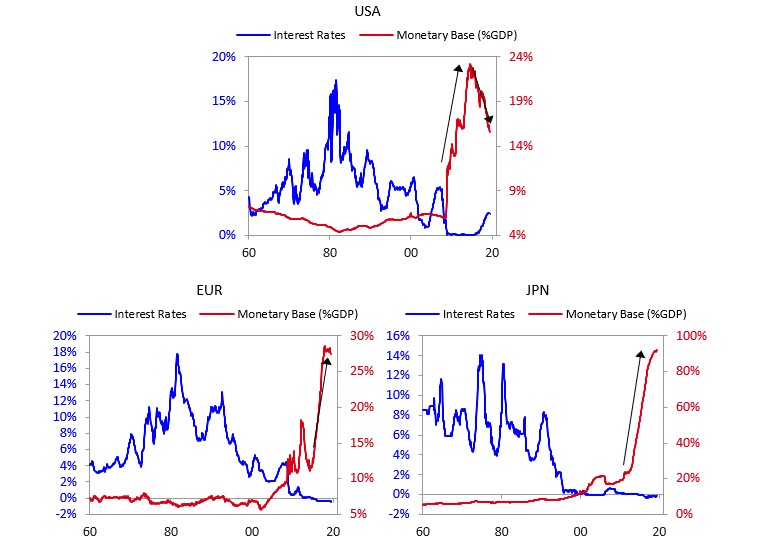 It’s a race between QE which is becoming less effective vs. ExpoTech vs. a major devaluation in fiat vs. a Smoot-Hawley equivalent.

We are rhyming with some aspects of the 1930s. History suggests when goods do not cross borders, armies will. But ExpoTech did not exist then, and the difference between Trump and FDR is massive, so it is likely a major military war will be averted as well as a major accelerated devaluation in fiat. Should pro-business policies in the U.S. along with ExpoTech help sustain GDP, the Fed may not have to lower rates all the way to 0%, but instead stand pat. But that is a big IF. Some material variables exist today that did not exist then so one must be careful not to make absolute conclusions based on history. Stay tuned.