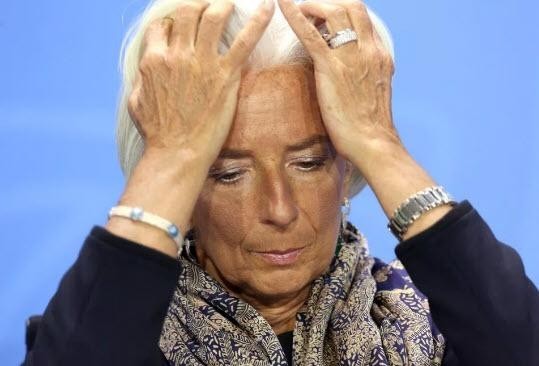 2019 has been largely trendless due to the tug-o-war between QE and slowing global growth exacerbated by the trade war and Brexit. As a consequence, quality growth stocks have and continue to remain underperformers. Those who build leadership lists have been understandably having trouble finding enough names for their lists. Nevertheless, the general market averages which had been mostly trendless for the year are now in an uptrend as accelerating sums of QE-generated capital must find a home in stocks, hard assets, and precious metals. Indeed, with few leading stocks producing real gains, the index ETFs are looking like a good alternative. Still, the uptrend is likely to be sloppy thus the Market Direction Model which has been on a buy signal will remain more tolerant to pullbacks unless signs are evident of something more serious. In this era of QE, pullbacks in the S&P 500 exceeding several percent have typically been triggered either by the removal of QE or the tightening of the balance sheet. So far this year, the worst correction by the S&P 500 has been -6.7%. 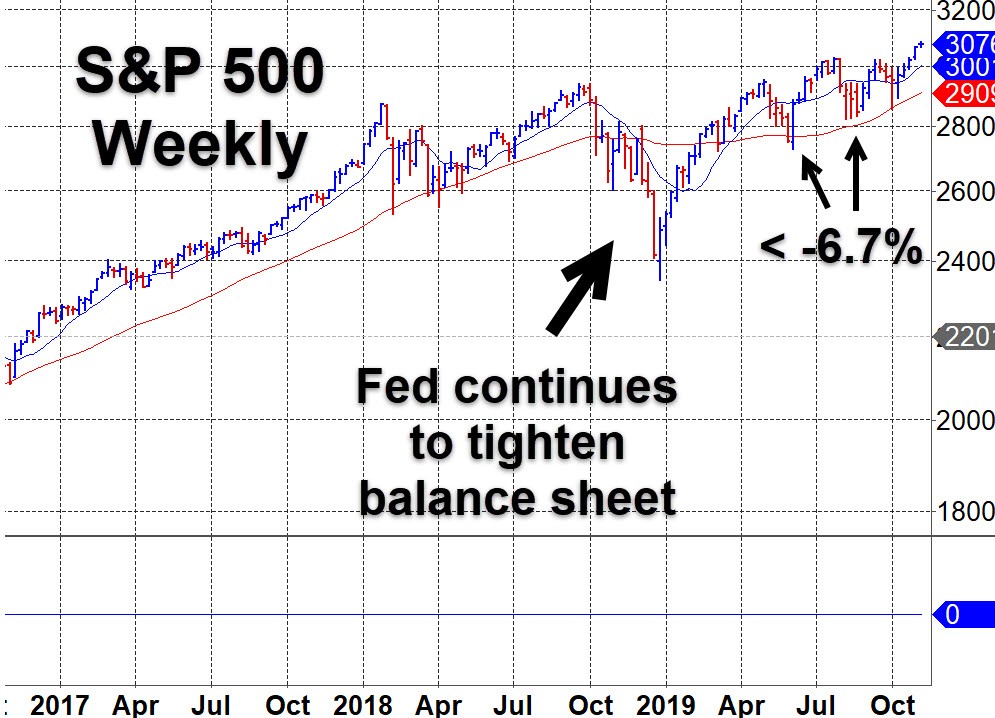 Now with central banks stepping up their QE programs even more so than before, odds favor the uptrend. Global stagnation remains firmly in place. As one example, Britain's economy grew at the slowest annual rate in nearly a decade in the three months to the end of September, as a global slowdown and Brexit worries hit business investment and manufacturing. Year-on-year gross domestic product growth slowed to 1.0% from 1.3% in the second quarter. The slowdown reflected a smaller-than-expected rebound in quarterly GDP growth after a contraction in the second quarter, when businesses faced an overhang of stocks of raw materials after Brexit was delayed from the end of March.

Pullbacks in the major averages will likely come from the usual suspects: a slowing global economy, the trade war and Brexit issues, and "central bank"-speak that QE will have to be slowed or stopped. Indeed, markets did not like the U.S. Federal Reserve saying they would stand pat on rates for the time being. QE is rocket fuel and markets want more. There will also be renewed talk of a loss in confidence in central banks which will further buoy bitcoin and precious metals as safe haven vehicles. But the fact that central banks have painted themselves into a corner of super easy money will remain thus hard assets, stocks, bitcoin, and precious metals will continue to benefit. Any recession may be "soft" while the printing presses continue to churn out fiat, but the "day of reckoning" will come since you cant create wealth from the simple act of printing money. Many nations have tried this recipe over the centuries which is why fiat currencies eventually go bust as a new regime takes its place.

Ray Dalio of Bridgewater has studied the situation in detail. We are in agreement that super easy money has created a vicious circle. Investors can get easy access to capital at near zero rates of interest thus have created the "pushing on a string" situation we have been observing in markets. U.S. markets are at new highs yet leading companies are not leading. In the world of private equity and venture capital, both groups have been sitting on increasing amounts of uninvested cash that they need to invest in order to satisfy their clients so have been pushing money onto startups and other entities that are already flush with capital. Meanwhile, as government debt accelerates, so does the interest rate payments on that debt, which will require central banks to buy the debt with QE-generated money to make those payments.

Then we have pension and healthcare liability payments that are increasingly unlikely to be met. Entities required to honor pensions are less likely to do so in the future as the original pension returns agreed on by regulators can be higher than what the market provides as interest rates are near historical lows. Government employees including public school teachers are likely to get squeezed. This payment deficit will be met by cutting benefits, raising taxes, or printing more money. Printing money has been the easiest path but it makes asset prices rise thus widens the wealth gap which stokes the fires of populism which is at levels not seen since the 1930s.

Enter the STO
Dalio does not seem to have a deep understanding of STOs (acronym for Security Tokens, misnomer for tokenized securities) and why they will be in such demand in this era of currency debasement. The value of an STO will be determined by its underlying hard asset whether it is real estate, gold, or even a stock. The rising prices of bitcoin and gold are reflective of this. The ex-CEO of NASDAQ said all stocks will be tokenized in 5 years. Regulations must hurry up so exchanges can list tokens which will open doors to retailers whose savings are no longer safe especially in countries with near zero or negative yielding accounts as accelerating levels of QE lowers the value of all fiat currencies against hard assets, precious metals, bitcoin, and stocks.
Global Stagnation

Now in sync with other central banks, Chinese markets leaped as its central bank cut its one-year interest rate for the first time in three years to relieve a worsening liquidity situation in the local bond market.

Over in Europe, GDP in the EU grew by a scant 0.2% in the last quarter ended September while the European Union Commission cut its forecasts for growth and inflation, warning that the worst is still to come for the euro zone economy. The Commission said growth will stay sluggish through 2021, at a forecast 1.2% with inflation to stay around 1.3%, well below the ECB's 2% target, with just a scant 0.7% in France and 0.3% in Italy.

Christine Lagarde now heads the ECB. She has lambasted Germany, the Netherlands, and other EU countries for not running a looser fiscal policy. Expect the ECB to continue to accelerate QE.

Over the last decade, rates in some countries have been cut to 0% or negative percent where quantitative easing was initiated through almost every fixed income asset available. In 2018, the central banks tried to unwind QE. Markets reacted badly. In December 2018, Fed Chair Powell reversed course and gave the markets what they wanted- more QE. The month of December 2018 was the low for major U.S. exchanges. Other central banks had no choice but to follow the same course, driving their balance sheets to record levels.

Lagarde says the ECB should boost their fiscal spending, using their budget surpluses to fund investments that would help stimulate the economy. But given the current state of the economy, this is one of the last things that central banks and governments can do to spur some growth. If that does not work, we move on to helicopter money. It seems central bankers are willing to send rates to even more negative levels if it means kicking the can on a global, populist uprising. Indeed, Lagarde noted, "We should be happier to have a job than to have our savings protected."

Meanwhile, US debt has grown from $19 trillion to $22 trillion under Trump, despite his election promises of going to bring the US budget deficit down 'bigly'.

Adding insult to injury as concerns global growth, agreement between the U.S. and China on trade issues appeared to be closing in on the first phase of a deal, but that was an illusion, and the countries have disappointed numerous times, so material progress could still be a long way off if both countries continue to play hard ball. China could play the waiting game of seeing whether or not Trump is re-elected in 2020 while Trump could see his reelection as secure thus demand more than China is willing to give.

Will exponential-growth technologies save the day or at least mitigate the depths of the next recession? Stay tuned.

The gold/silver ratio is the amount of silver it takes to purchase one ounce of gold. If the ratio is 50 to 1, that means, at the current price, you could use 50 ounces of silver to buy one ounce of gold. The ratio spiked this past summer to 95.11. It currently sits at 83.2, thus silver is still well undervalued relative to gold. The long-term average ratio is about 50 which on today's gold price would suggest close to $30 for silver. Meanwhile, gold is enjoying a strong bull run as a consequence of QEndless. Yes, gold has had a sharp pullback this week but as a consequence of false hopes of a first round truce in the U.S.-China trade war. Washington pushed back on China's claims about an imminent trade truce. 1x SLV and its 3x variant USLV for the less risk averse are two great ways to capitalize on the silver bull.

Meanwhile, gold junior miners (as well as gold miners) both highly correlate to the price of gold. Since gold is bullish, gold junior miners is bullish too. When we finally get a recession, stocks will be hit hard while the fear trades such as gold, silver, and bitcoin will flourish. The Great Recession of 2008 showed that while everything including gold dropped sharply in price, gold was the first back to old highs by early 2009. The best real estate also bounced back to old highs in late 2009/early 2010. This time, bitcoin should also stand to gain. Billionaire investor Paul Tudor recently told Bloomberg that gold has everything going for it right now.

A number of publications have suggested that gold junior miners currently pose the greatest upside in the gold market for fundamental reasons. While it is true that some junior mining companies have jumped far greater than the gains made in gold itself, such companies often carry serious risk in addition to being typically of the microcap or penny stock variety where gap down risk is pronounced. It is far better to use junior gold miner ETFs such as 1x GDXJ and 3x JNUG whose risk is spread across many companies.

As gold ETF GLD goes higher, it should pull gold miners and junior gold miners along with it as it has done in the past. 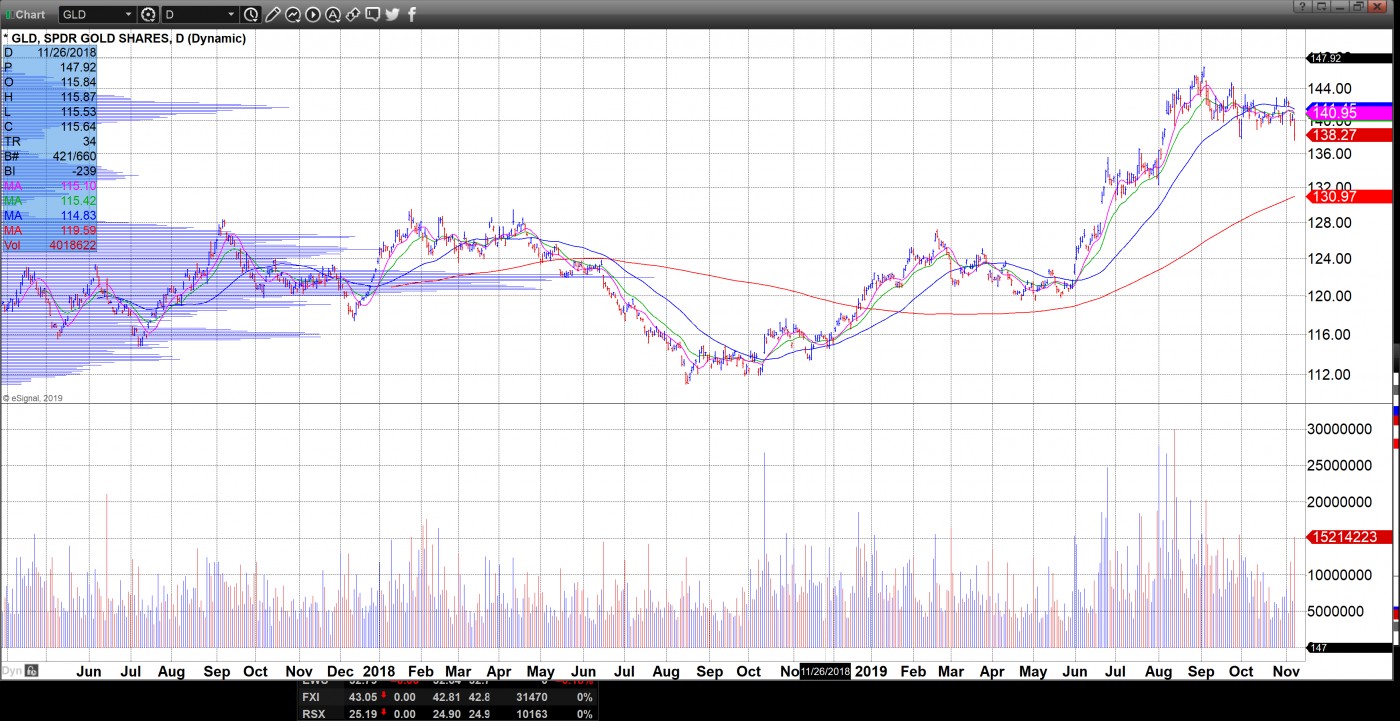 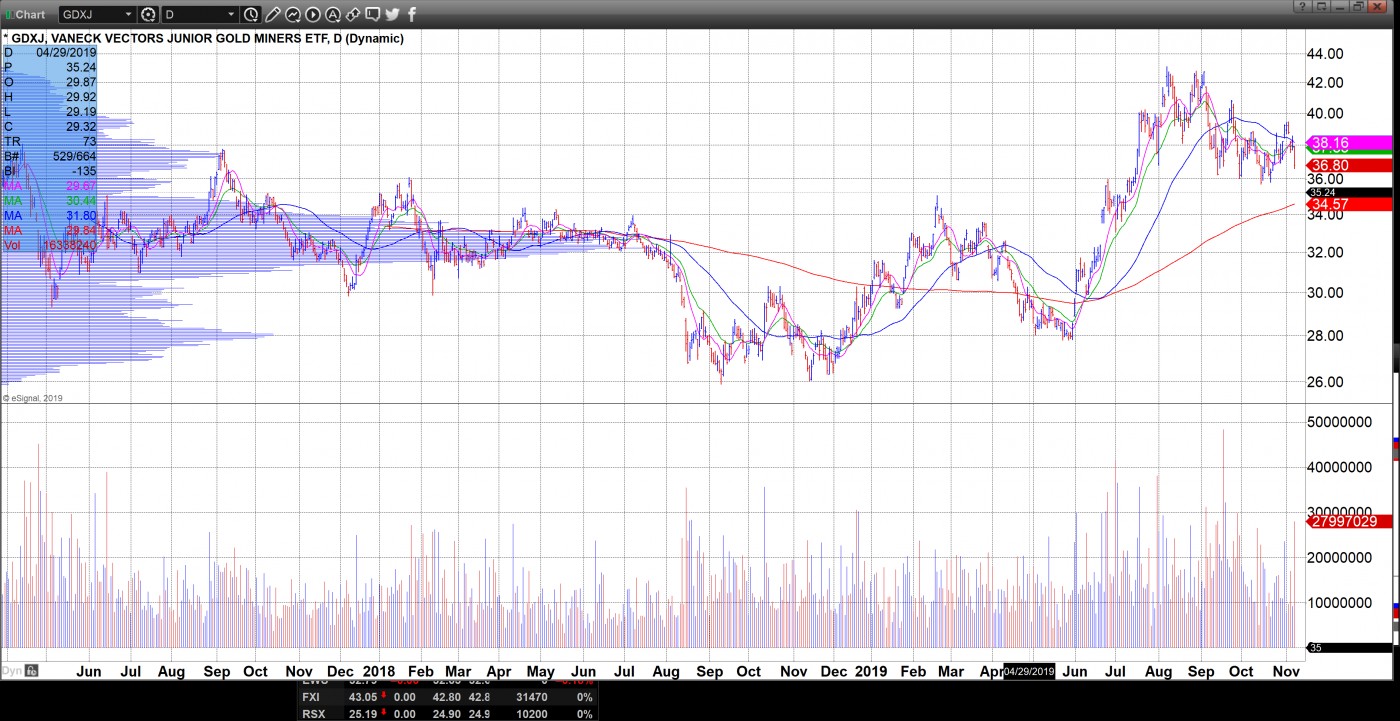