The Metaversal Evolution Will Not Be Centralized™
Parallel metaverses?
We've all heard of parallel universes.  The many-worlds theory proposes that every time one quantum state, or outcome, is observed, there is another "world" in which a different quantum outcome becomes reality. But if such exists as has been postulated by physicists, certainly we know that while history may not exactly repeat, it does rhyme. So on a timeline, parallel "worlds" can exist. History teaches.

The last major global pandemic was called the "Spanish" flu of 1918-1920. It was the second deadliest pandemic after the black death bubonic plague with a global death toll of 2-3%. It broke out near the end of World War I. After the end of the war, demand temporarily dropped pushing commodities about 5% lower, but by the spring of 1919, enormous foreign demand for goods pushed commodity and stock prices much higher. This demand was due to easy money rates left over from the war. The central bank had kept rates unusually low after the war because commercial banks had bought loads of liberty bonds during World War I.

But then the Fed stepped in and started to hike rates in late 1919 to quell demand and temper inflation which had more than doubled since 1913. 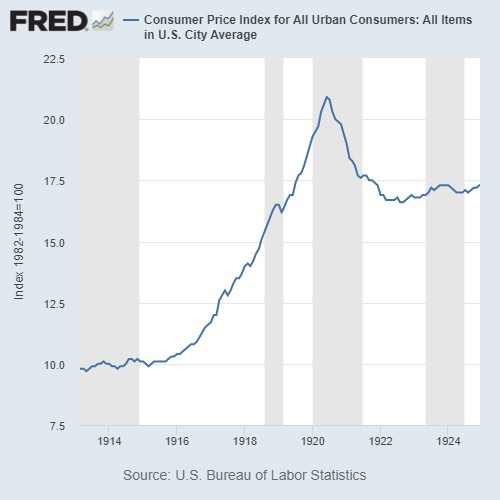 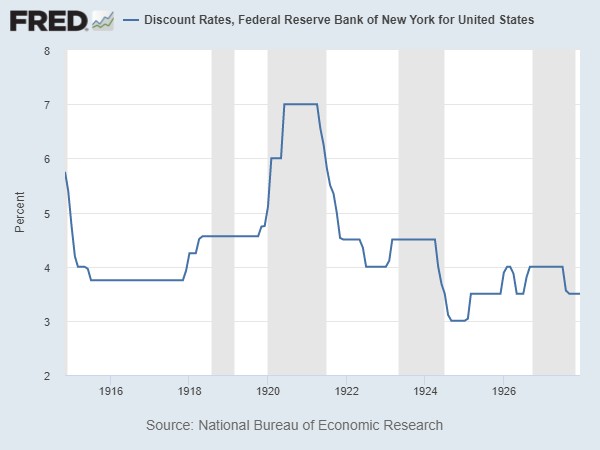 The price of commodities then peaked in the spring of 1920 after the Fed raised the discount rate to 6% then quickly raised it again to 7%. Yet, business activity had already topped earlier. What should have been a mild recession turned into a depression. Prices fell 22% between 1920-1922 while bank failures soared. The Dow Jones Industrials lost about -47% from Nov-1919 to Aug-2021 (22 months) while unemployment shot to 12%. 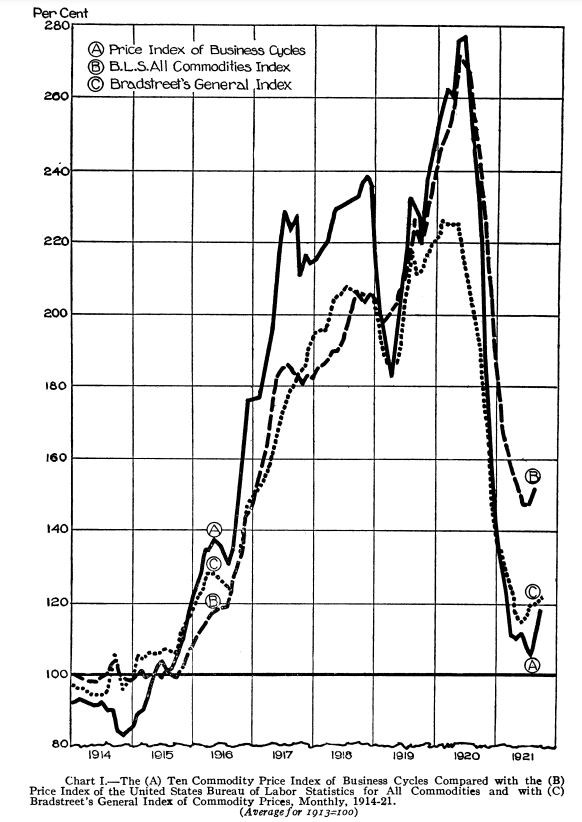 The Fed was then pressured to lower rates which quickly came down from 1921-22 spurring the “roaring” 1920s, a decade of economic prosperity like few others. The Dow Industrials began a new bull in Aug-1921.

In today's market, there are parallels. In both cases, unusually easy money due to unusual circumstances was followed by aggressive rate hikes which cratered markets. The recession then was unusually harsh. The 1920-21 bear was due to tight money. A couple of months after the Fed started to lower rates in 1921, the bear market found its major low and a new bull market began.

That said, just because the Fed starts to lower rates does not guarantee a major low in the stock markets. For example, this did not occur in the early 1930s even after the Fed started to aggressively reduce rates.

Instead, the Dow didnt find its major low until Jun-1932.

This also happened in the 2000-2002 bear market where the NASDAQ Composite had its largest decline ever of -78% despite the Fed aggressively reducing rates from 6% to 0.75%. Note, the reduction in rates before the financial collapse in late 2008 did not prevent the bubble from bursting as other major factors were at play.

In both cases which had to unwind massive market bubbles, rates had to be reduced several times before the market found its major low. Today’s market also sits atop a massive bubble so it’s possible that after the Fed is done raising rates, markets continue to fall.

At present, more than a few rate hikes are planned as the Fed seeks to lower inflation back down to 2%. The markets are likely to stage deeper corrections before rates reach 400-425 bps which would result from the current CME Fed Funds Futures predictions of two 75 bps and one 25 bps hike by year end, up from 225-250 bps.
Unemployment has yet to soar but weekly jobless claims are on the rise. History shows such increases in claims precedes jumps in unemployment. Corporate earnings are still soaring, but this too will correct sharply as the recession takes hold.

The supply of homes on the market has also spiked which historically coincides with recessions. 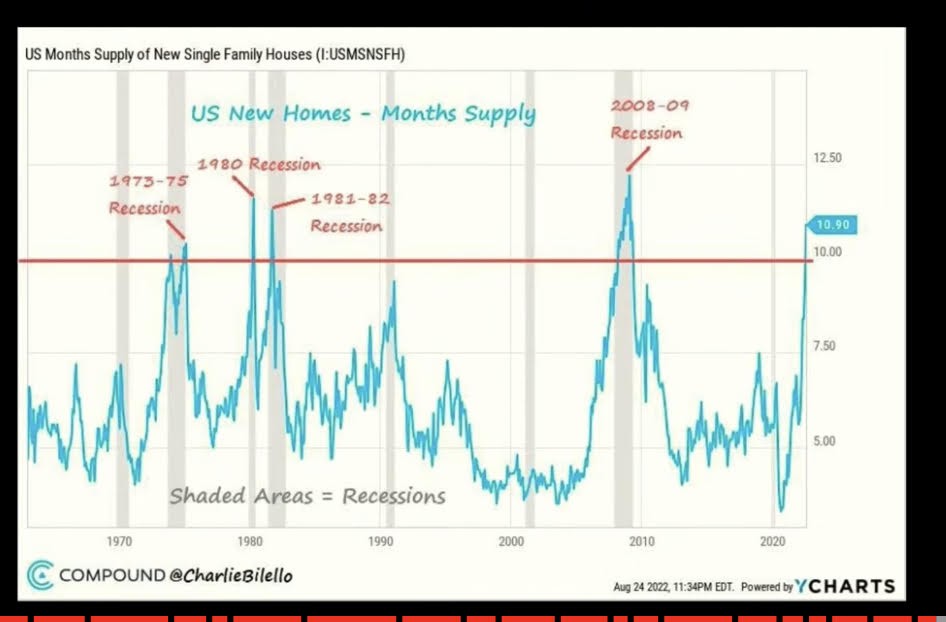 Other metrics are likely to surface later this year or early next year that show the recession worse than expected. The Fed will then likely halt the hikes or, if warranted, fire up the printing presses once again if another black swan crisis surfaces. Otherwise, because of high inflation, QE5 won't likely begin until late 2023. This would of course eventually reignite inflation which is unlikely to have dropped to the targeted 2% but to the "new norm" that the Fed will set of maybe 4.5-5%. M2 will then start to reaccelerate after having dropped by an immaterial amount. 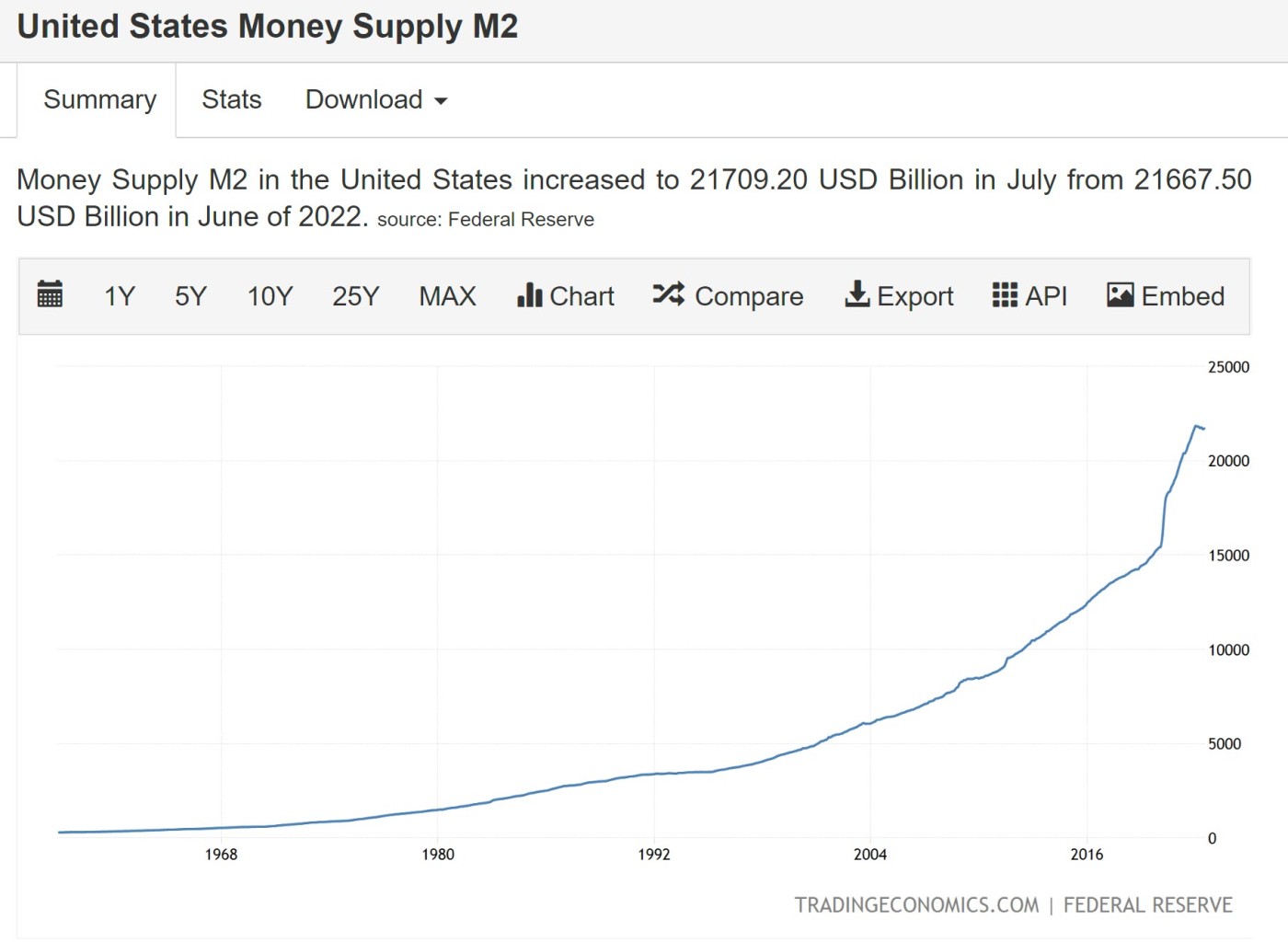 If we are to rhyme with the 1920s, the bubble will have to have unwound to some extent which suggests materially lower stock and crypto markets, and QE5 will have to launch spurred by another crisis, or from the recession turning out to be far worse than expected. Either situation could result in far deeper market corrections such as during the early 1930s or early 2000s even after the Fed started to aggressively lower rates.

Given record levels of debt, double digit true inflation on a global scale, and interest rates still historically low, central banks are cornered. That said, inflation may be close to peaking in the U.S. due to lower commodity, gasoline, and real estate prices, poor buying conditions not seen since the early 1980s, and the spiking inventory to sales ratio. While inflation is likely to stay stubbornly higher than expected, YoY inflation is likely to temper. This would give the Fed room to hike less aggressively which could create further dead bat bounces. 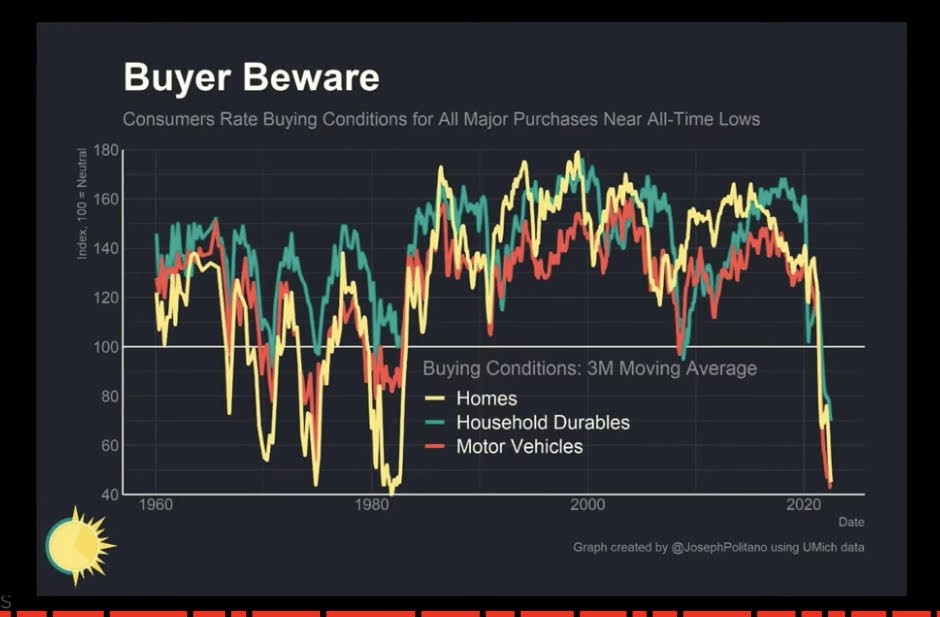 Fed funds futures readjusted their estimates of a 100 bps rate hike to 26% when the Fed meets later this month. Out to end of the year, Fed funds futures now expect a target range of 425-450. From current levels of 225-250, this suggests two 75 bps rate hikes, and one 50 bps hike. Stock and crypto markets are far more likely now to continue their choppy downtrends.
Like what you read?
Let us help you make sense of these markets by signing up for our free Market Lab Reports:
This information is provided by MoKa Investors, LLC DBA Virtue of Selfish Investing (VoSI) is issued solely for informational purposes and does not constitute an offer to sell or a solicitation of an offer to buy securities. Information contained herein is based on sources which we believe to be reliable but is not guaranteed by us as being accurate and does not purport to be a complete statement or summary of available data. VoSI reports are intended to alert VoSI members to technical developments in certain securities that may or may not be actionable, only, and are not intended as recommendations. Past performance is not a guarantee, nor is it necessarily indicative, of future results. Opinions expressed herein are statements of our judgment as of the publication date and are subject to change without notice. Entities including but not limited to VoSI, its members, officers, directors, employees, customers, agents, and affiliates may have a position, long or short, in the securities referred to herein, and/or other related securities, and may increase or decrease such position or take a contra position. Additional information is available upon written request. This publication is for clients of Virtue of Selfish Investing. Reproduction without written permission is strictly prohibited and will be prosecuted to the full extent of the law. ©2023 MoKa Investors, LLC DBA Virtue of Selfish Investing. All rights reserved.
FOR OUR FREE MARKET LAB REPORT :