Are we surprised the ECB had to make rates even more negative and restart its QE program? Stock and precious metal futures jumped higher on the news. No news here, really. Just a repeat of what has been happening as of late as central banks must remain dovish in the hopes they will be able to jump start their respective economies.

More interestingly, is the risk of China exporting deflation to the rest of the world on the rise? Chinese producer prices fell at their fastest rate in three years in August. This underscores the problems their manufacturing sector faces which is largely dependent on access to the U.S. market. Further, Japan said earlier this week that orders to machine tool makers fell by 37% on the year, the lowest since 2009. Uncertainty around trade and Brexit is hammering business investment.

This further spurs on the need to lower rates even further. In a world with historically low interest rates, Joseph Gagnon, a former Fed member, said “the international environment becomes more important, because depreciation of the currency is the one remaining option. And surely that has problems, because currency depreciation is a zero-sum game: Anything you get, the other guy loses.”

Any stimulus that a central bank can eke out of devaluation comes at a direct expense to its trading partners, and is likely to be short-lived before other countries cut rates or buy bonds to compete. This could launch a full blown currency war. Bridgewater's Ray Dalio predicts currency devaluations are on their way after QE runs its course.

But even before such were to happen, a number of analysts speculate President Donald Trump could try to intervene directly in exchange markets. The White House adviser Larry Kudlow has said this would not happen, but Mr. Trump has declined to rule it out.

Mr. Trump together with the help of the Fed and/or Congress could approve such a devaluation of the U.S. dollar which could set off a wave of devaluations around the planet. David Woo, head of global interest rates and foreign exchange research at Bank of America Merrill Lynch, has said, “International coordination is breaking down. Before, exchange rates were an afterthought of monetary policy. Now, foreign exchange has moved to the center stage.” Indeed, currency-focused monetary policy could remain a reality for as long as the trade war persists.

It's no wonder rates are near historical 5000 year lows. (I updated the chart below to reflect the current situation.) There have been more than 730 global interest rate cuts since the Lehman crisis. 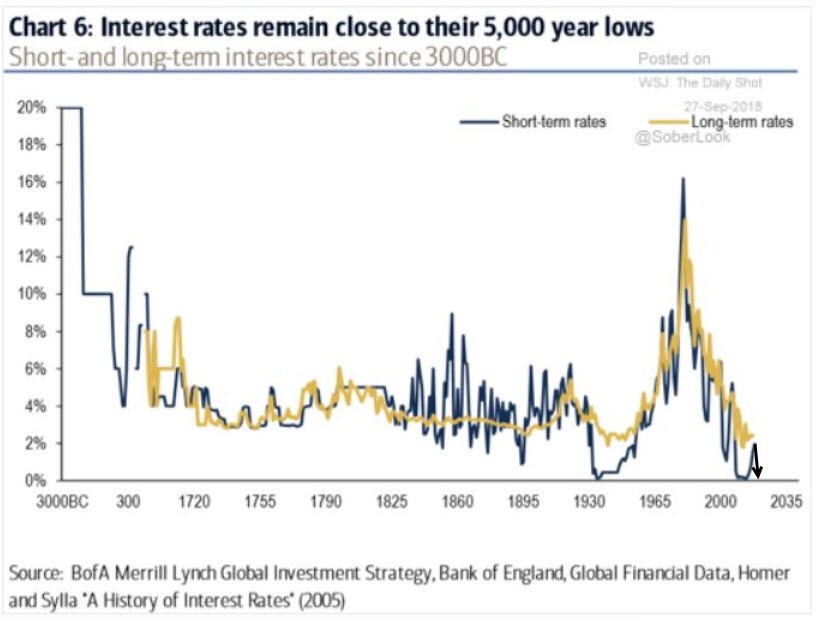 Despite the cuts, excluding the US equity market, the MSCI global equity index is still 27% below its 2007 high. Over in Europe, banks continue to erode. European financials as a % of MSCI Europe have been eviscerated down to 17% from 31% in Jan 2009.
Because of the cuts, the current bull market which began in early 2009 is the biggest and longest of all-time. Earnings for U.S. stocks are heavily inflated due to corporate spending on stock buybacks since 2009 which is at all-time highs, now totaling $5.4 trillion.

Debt continues to soar. The value of negatively-yielding bonds jumped $3 trillion in the month of August alone to now total over $17 trillion. This equates to nearly one-third of the value of total outstanding debt.
As a consequence, global debt is near an all-time high level of global GDP. It stands at 319%.
Meanwhile, the trade war continues. Tariffs peaked in 1969 at 10.6% on dutiable imports until this year as tariffs look to exceed this level.

Recession near given the trade situation and yield curve inversion? Not necessarily. QE while increasingly ineffective can still continue for yet another couple years which should propel bitcoin, precious metals, and hard assets higher. Stocks and bonds will also most likely continue to benefit barring an elevation of the trade war down the road into something militaristic, or at least currency related.
Like what you read?
Let us help you make sense of these markets by signing up for our free Market Lab Reports:
This information is provided by MoKa Investors, LLC DBA Virtue of Selfish Investing (VoSI) is issued solely for informational purposes and does not constitute an offer to sell or a solicitation of an offer to buy securities. Information contained herein is based on sources which we believe to be reliable but is not guaranteed by us as being accurate and does not purport to be a complete statement or summary of available data. VoSI reports are intended to alert VoSI members to technical developments in certain securities that may or may not be actionable, only, and are not intended as recommendations. Past performance is not a guarantee, nor is it necessarily indicative, of future results. Opinions expressed herein are statements of our judgment as of the publication date and are subject to change without notice. Entities including but not limited to VoSI, its members, officers, directors, employees, customers, agents, and affiliates may have a position, long or short, in the securities referred to herein, and/or other related securities, and may increase or decrease such position or take a contra position. Additional information is available upon written request. This publication is for clients of Virtue of Selfish Investing. Reproduction without written permission is strictly prohibited and will be prosecuted to the full extent of the law. ©2022 MoKa Investors, LLC DBA Virtue of Selfish Investing. All rights reserved.
FOR OUR FREE MARKET LAB REPORT :