Market Lab Report - Adapt or Die: Markets Change [CAUTION: The substantial profits achieved by the VIX Volatility Model can result in sharp moves in both directions]

Markets Change
Do not let the current post-election rally lull you into complacency. Always stay focused on your positions and keep stops tight. The key is to minimize risk.
As one of many examples of how markets change, base breakouts stopped working after the market topped in March 2000 simply because the tone of the markets changed. Major averages consequently became more compressed from 2004-2007 thus ending the reign of base breakout winners that characterized so much of the 1980s and 1990s. The breakout failures of 2004 was the motivation behind my observation of the early buy point within a stock's base which we called the pocket pivot. 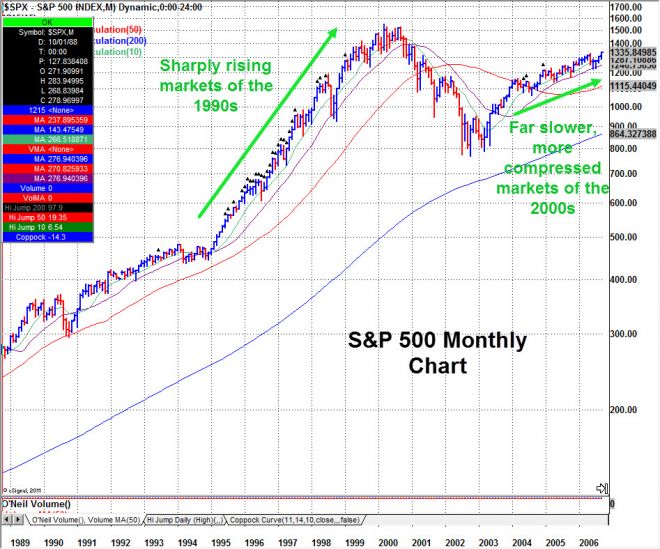 Then markets changed again in 2009 with the introduction of quantitative easing. I made necessary adjustments to the Market Direction Model in early 2009 to address this material change in market behavior.

In the last few years, the markets changed again to where, when it comes to buying and selling stocks, it is usually better to sell strength when the price gets ahead of itself in context with the stock's chart and buy constructive weakness to keep risk to a minimum. We have guided members accordingly since 2013.

The key is to adapt to material changes in the markets. By staying focused on the markets on a daily basis, we have managed to stay in sync thus adjust our buying and selling strategies accordingly. This has happened a number of times throughout our more than 25+ years trading the markets. My observation of favorable buy points in 2004-2005 led to the creation of what I call pocket pivots and buyable gap up buy points. Gil Morales's observation of buying on constructive weakness and selling on strength has netted him strong double digit percentage returns every year since 2013, with a triple digit (>100%) achievement in 2014.

Both timing models are adaptive in that they take in the data in real-time, and if there is enough evidence that a material and lasting change has taken place, each model will adapt accordingly. This does not guarantee profitability such as in the case of the Market Direction Model (MDM).

For example, 2013-2014 were years highly manipulated by quantitative easing so the general market would sell off just enough to put MDM back into cash, then the market would find a shallow floor and resume its uptrend, costing MDM performance.

Then 2015 came along which was mostly trendless until late in the year.

The Trend Following Market Wizards, many of whom have been interviewed by Jack Schwager and the like have never suffered such poor performance since 2009. They collectively have lost money almost every year, an unprecedented occurrence as, prior to 2009, they had sat with stellar 20 to 30+ year track records: http://www.automated-trading-system.com/resources/trend-following-wizards-fund-performance/

But that further underscores how much QE affected the stock market.

The VIX Volatility Model (VVM) was an answer to this material change. Backtests have shown it to be highly profitable in trendless markets as well as in uptrending or correcting markets.

VVM focuses on price/volume so while 2016 was its most challenging year yet, it was still able to be strongly profitable after the "software" updates were put in place.

When you create a trading strategy, you should always test if it works in a wide variety of market environments. I've conducted extensive backtests going back to the 1990s and spot checked periods as far back as the 1920s. I have tracked VIX, bull and bear markets, and how the ever-changing, dynamic list of leading stocks behaved through each cycle. Based on this exhaustive analysis, the VIX Volatility Model should continue to outperform even as markets change. That said, always know that past performance is never a guarantee of future performance. Think about how much markets changed after quantitative easing began in full measure in early 2009. Then think about how they changed yet again as discussed above. Never risk money you cannot afford to lose. Realize that any strategy of your own may be subject to the same cautions.

VVM loves the volatility that comes with markets in correction as well as uptrending markets. Its most profitable moments occur during market corrections. It thus trounced the market averages in 2000-2002, 2008, 2010, 2011, and in late 2015 in backtests. It also did well in early 2016 which made up for the challenges later in 2016 including the Brexit surprise which was followed by the most go-nowhere S&P 500 in history between the months of July through October as we detail here: https://www.virtueofselfishinvesting.com/reports/view/market-lab-report-mega-frustrating-markets-not-necessarily

So to outperform in a wide variety of markets:

Backtests (and partial real-time trading since 2015) have shown triple digit years every year except for 2016. If you create a strategy that carries huge gains, know there is always a trade-off between risk and reward. I thus provide this CAUTION: To achieve such returns, expect sharp moves in your position at times. This can be enough to cause an investor to prematurely sell their position. Smaller positions may be warranted depending on your risk tolerance level (pain point). Also expect a string of false (losing) signals at times. This can be enough to discourage an investor from taking the next change in signal. I know from experience as I overrode the model's signals at some critical times. In working with the model in real-time trading using my own capital, I acclimated myself emotionally to the model's change in signals. I have suggested each member do the same.

IMPORTANT: VVM is up +39.3% for the year (as of 3-3-17) but keep in mind the current signal's profits of +11.16% using ETF XIV could easily be reversed. The market could have a couple of bad days in a row where volatile ETFs such as XIV could easily reverse their gains. A fail-safe would kick in to minimize any loss so at worst, the trade would be closed roughly near breakeven.

Q: Why cant VVM just switch to cash ahead of such an event?

A: Both real-time and backtests have shown the model maximizes its profits by NOT trying to pick tops or bottoms. VVM can at times switch to cash before such a drop as it has done at times, but that form of insurance comes at a cost. VVM walks the tightrope well as it often avoids getting pushed prematurely into cash while protecting the downside by switching out of its signal if necessary.