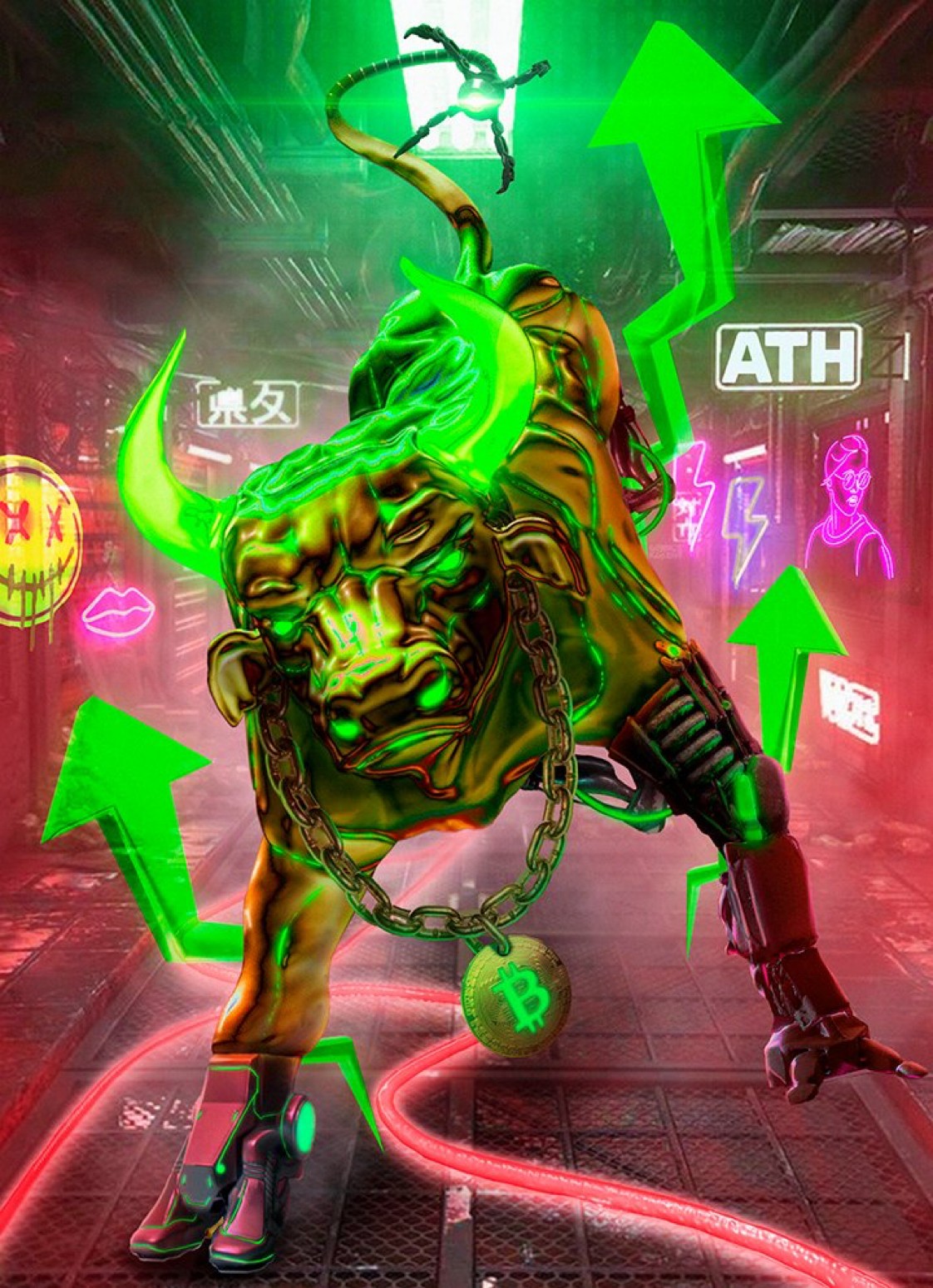 The dominoes continue to fall. Mexico's richest man put #bitcoin in his twitter bio following Elon Musk's lead. And the city of Miami is the first municipal to put part of its treasury into bitcoin, transact in bitcoin, as well as pay salaries in bitcoin. This is another first for city governments then eventually entire states. Indeed, Dubai free zone becomes the first UAE Government entity to accept bitcoin, ethereum, and tether as a mode of payment. Also, the first bitcoin ETF has been approved in Canada. Meanwhile, the SEC Commissioner said it is time for a bitcoin ETP. Exchange-traded products (ETP) are types of securities that track the underlying security, index, or financial instrument. ETPs operate in a very similar way to ETFs and are another type of collective investment vehicle. Blackrock's Rick Rieder said they have started to accumulate bitcoin. Blackrock is the largest fund manager in the world with $7.4 T AUM. And how far Morgan Stanley has come. Its Chief Global Strategist said, "We see fundamental reasons to believe that - regardless of where the price of bitcoin goes next - cryptocurrencies are here to stay as a serious asset class."

The market cap of cryptocurrencies in the last bull run achieved an aggregate value of just under $1 trillion. It currently stands at just over $1 trillion. 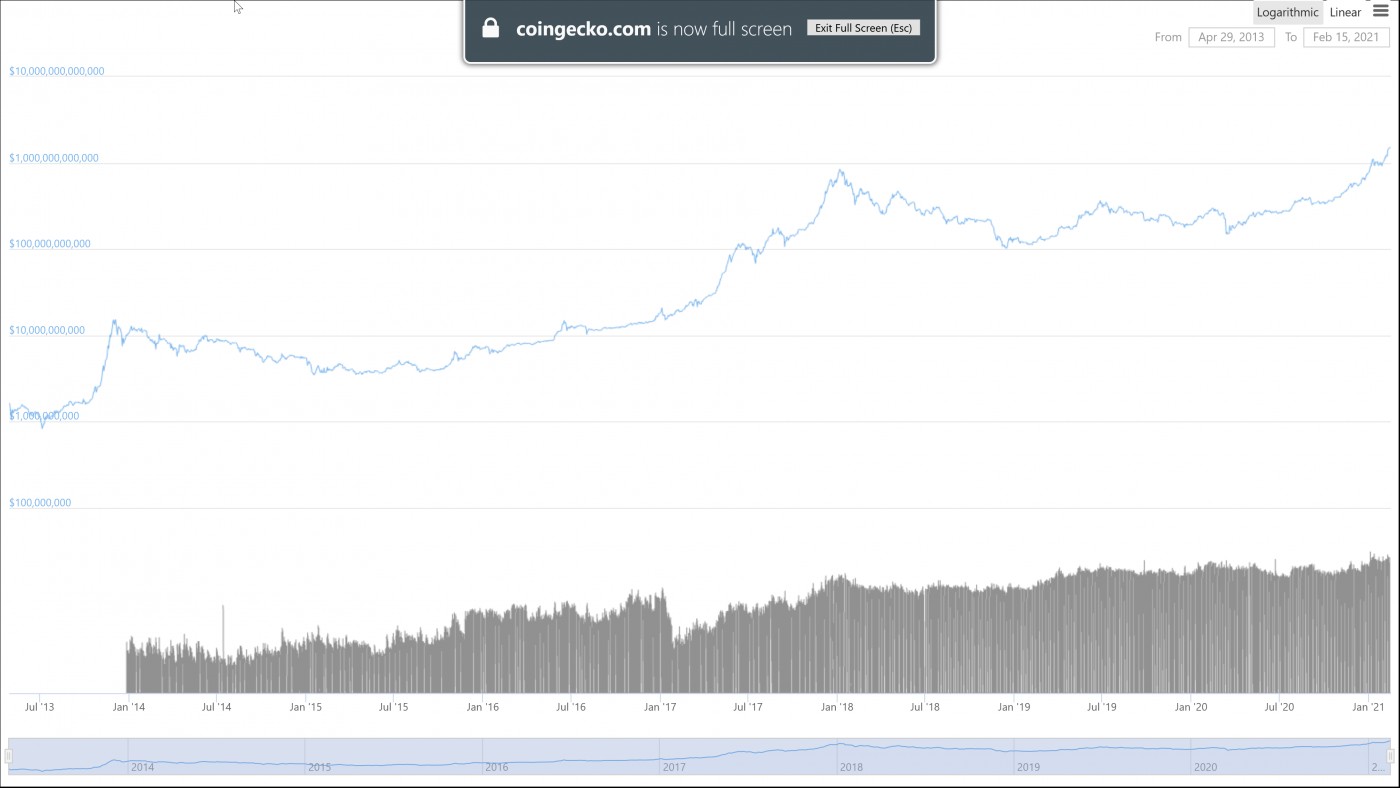 Record levels of bitcoin have been moving off exchanges for the following reasons. Many are becoming long term HODLers of bitcoin. Further, major institutions, banks, corporations, HNWIs, and even governments are waking up to the massive utility and onboarding of blockchain technologies including bitcoin and ethereum. This crypto bull market is far from topping out.

Retail and institutional FOMO combined with a serious supply shortage due to companies such as Grayscale and PayPal buying up bitcoin should propel crypto valuations beyond $10 trillion. Corporations are using btc to reduce the impact of falling fiat from the seemingly limitless quantitative easing. MicroStrategy on Wednesday adjusted its planned convertible senior note sale from $600 million to $900 million – all of which will be used to buy more #Bitcoin

Further, DeFi is being used by bitcoin to earn high yields. Anyone can also use BTC as collateral to avoid having to sell BTC to tap its value through collateralized loans, a nice way to sidestep capital gains tax on their bitcoin while continuing to ride it higher. The amount of bitcoin used for this purpose strongly adds to its supply shortage.

In terms of the price action of bitcoin and etherum, both which are coming up against major levels of psychological resistance, namely the $50,000 and $2,000 price levels, Willy Woo writes, "Capital flows continue to be bullish however recent price action has outstripped fundamentals, a bullish consolidation is expected (this may take a week) before a bullish breakout to explore new highs." So bitcoin's breakout through its 50,000 level represented by a close above the uptrending line on a 4-hour chart was finally achieved on Wednesday 2-17-21. 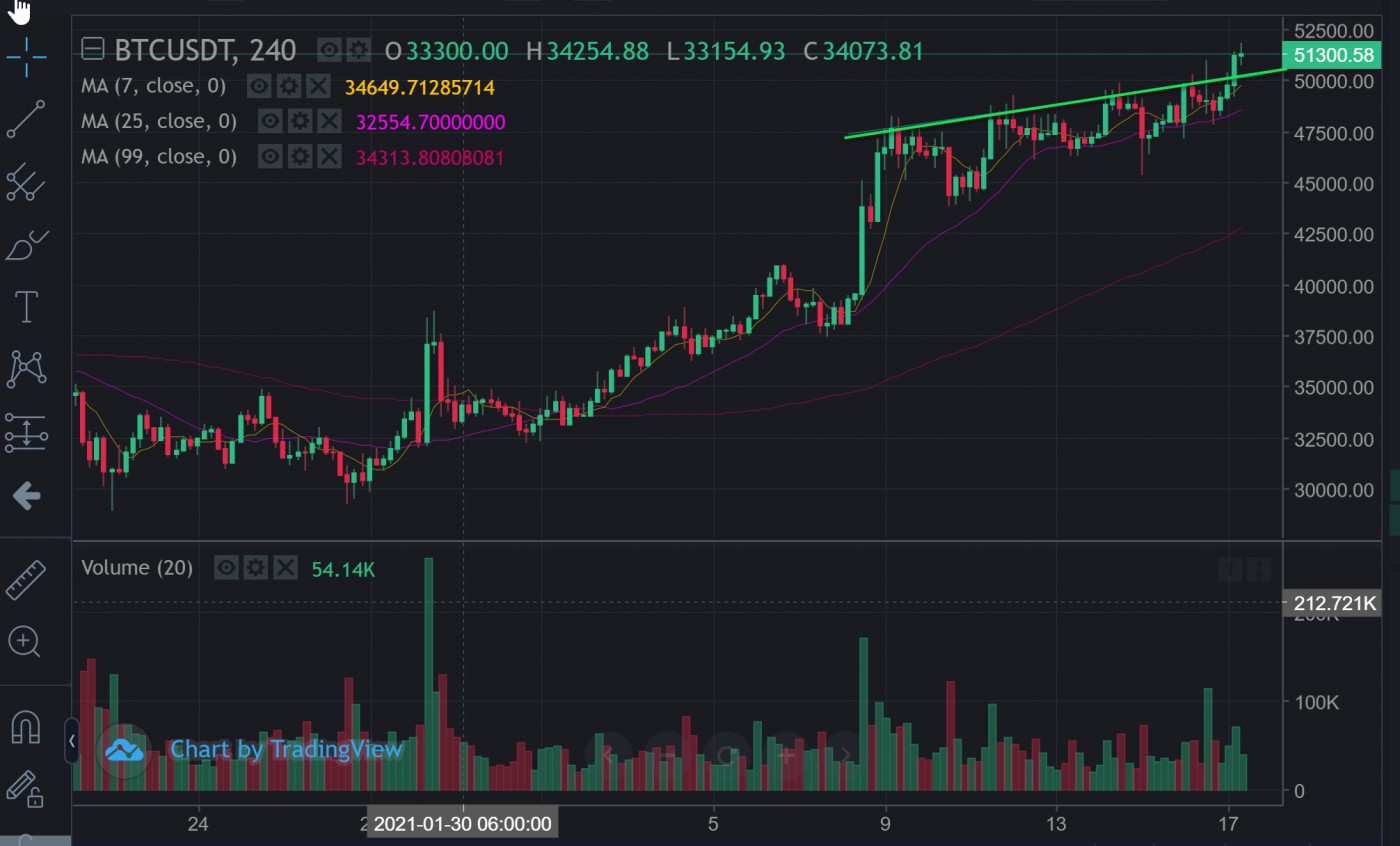 That said, we did get a consolidation around 2 am GMT on Monday 2-15-21 with bitcoin losing $4000 in a couple hours. The market has since bounced and futures funding levels have nicely reset. When funding gets overheated, this is often a major headwind for further advancement in the price of bitcoin. The last time funding levels spiked was in early January. Bitcoin then had a major -31.4% correction. This time, the reset is looking to have happened much faster. The Grayscale effect which is the bullish price action on spot prices after major unlocking of GBTC shares, remains bullish, and on-chain indicators continue to look healthy. Ethereum remains in spitting distance of 2,000.

One other tailwind is the number of bitcoin short sellers on the CME is at record levels. This could cause a torrent of short covering as the price of bitcoin continues higher, and also explains in part why bitcoin kept teasing its 50,000 level, 2 steps forward, 1 1/2 steps back, over the last several days.

"Decentralized apps are open source but protect value, since the data is secured by blockchain consensus. Every new project plugs into every other project.  A new feature anywhere becomes available everywhere. Unimaginably capable Dapps will overwhelm legacy centralized apps."

"The road to socialism via inflation: • Print money, crash the reserve currency, destroy savers, and force them into inflated assets.  • Asset inflation leads to inequality. Demonize asset holders and tax the nominal gains, thereby confiscating the real value of the assets."