Market Lab Report - Bitcoin's answer to the George Orwell Show; How many times can the Fed get it wrong?!

CBDCs are Orwellian vs. Bitcoin

In yet another step towards a fully Orwellian society, Paypal recently announced they would remove as much as $2500 from a user's account if that user was deemed to be spreading lies. Of course, Paypal has become the dictatorial judge without any courts or lawyers to arbitrate. Welcome to the dawning of CBDCs (central bank digital currencies) which aim to control our money. In China, if one has a poor social score, they could see their rate of interest drop. Imagine seeing your bank balance shrink in real-time because your interest rate bearing account dropped below 0% because your social score dropped.

This is why crypto is so important. Fundamentally, crypto has to do with freedom. Freedom is the use case. Crypto is the counterbalance to government control over our money. Bitcoin is the magna carta of code. There are no constitutional rights without the freedom to transact. CBDCs are an intentional effort to revoke this freedom under the guise of convenience. The Canadian government's response to the truckers protests nicely illustrates this.

Bitcoin is decentralized so no government can control it. Just as we have separation of church and state, Bitcoin separates money and state. It is borderless which has enabled millions to sell their plummeting local currency into bitcoin then into dollars, especially those who live under deeply corrupt governments. Indeed, the number of hyperinflationary currencies in the developing world continues to grow.

Fiat currencies derive their value from the full faith and backing of their respective government. As long as society has faith in their fiat system, their currency will continue to have value. It is backed by taxpayer dollars. Unlike fiat, Bitcoin derives its value from its scarcity combined with its utility as well as its network effect. Having a single phone is pretty useless as no calls can be made through it. But as soon as the number of phones increases, the value increases exponentially. Analogously, Facebook can be easily duplicated but such a facebook with no users is worthless. Meanwhile, Facebook with its billions of users is one of the most valuable companies on the planet. Hence, with Bitcoin, network adoption is the factor which plays the leading role in adding value to it. Its hash rate and number of users both recently reached all-time highs despite this year's bear market. The number of Bitcoin users tends to double every 12 months, so is projected to be used by 25% of the planet by 2026.

Bitcoin also has value because it cannot be corrupted, printed, nor inflated away. Unlike fiat, Bitcoin has no central bank, and its decentralized structure provides security, utility, and the borderless transfer of value. This is why the price of Bitcoin continues to rise to new highs against fiat reserve currencies every few years. In many ways, Bitcoin can also act as a store of value similar to gold though it is far more volatile since Bitcoin is still climbing its S-curve. Nevertheless, its gains have been unparalleled having risen by hundreds of millions of percentage points. $1 worth of Bitcoin in 2010 is worth a few million dollars today even after losing more than two-thirds of its value.

That said, gold was volatile in the 1970s and can be confiscated, stolen, or lost far more easily than Bitcoin. A friend of ours has 8 figures worth of gold buried in farm land. With Bitcoin, you just need your seed phrase and internet access. Of course, if there's little to no internet nor electricity, the world is then looking at a far more dire situation. In all likelihood, any internet outages are resolved by mesh networks which are designed to override any government blockage of the internet.

Money laundering, terrorism and tax evasion have been weaponized for both short-term and long-term goal creep of governments. In the United States and EU, banks and payment processors have been pressured to cut off accounts to gun shops, adult businesses, crypto businesses and other perfectly legal businesses. While any government has the right to pass laws to make these things illegal, we are instead seeing "deep bureaucracy" where the banks point to their regulators and say "they told us to close high risk accounts" while the regulators point to the banks and say "we never said that, just be careful."

The net effect is deeply undemocratic. Your bank account is gone and you have no recourse, no due process, not even an actual law that says "you should not have an account". Being unbanked and having to rely on cash is more or less cutting you off from the modern economy. Paying bills, getting a paycheck, paying vendors, and investing in 401K all require access to traditional payment rails.

Many central banks want to use their CBDCs to eliminate cash, allow global transaction censorship, and manipulate interest rates. Below a certain negative rate, people will withdraw their money but if cash is no longer accepted, then people are forced to keep their money in the banks. Future dictators will also be able censor their opponents' spending during a election period to prevent them from running a campaign.

Every year, the slow creep continues by way of reporting requirements which get a little broader, the penalties steeper, and the restrictions on cash withdrawals more severe. Presumption of innocence is turning into presumption of guilt. I ended my banking relationship with HSBC when they wanted me to fill out a form explaining why I wanted to withdraw 2,000 in pounds.

You can think of blockchain as a view-only excel sheet for the entire history of transactions. As the former chair of NASDAQ said, eventually all stocks will be tokenized. I would add that eventually every single piece of land around the world will be written onto the blockchain. It lets people easily track the history of owners, sell & trade the land, borrow against the land, and sell it fractionally, among other things. DeFi makes it possible to put every real-world asset on-chain including your possessions, your art, your jewelry. And it will transplant legacy banking due to its far greater efficiencies at far lower costs.

But in the meantime, economic data point to recession. Fed minutes released Wednesday at 2 pm EST are likely to be as hawkish as the Fed has been as of late. The hawkish stance by a variety of Fed members last Friday remains in firmly place given the strong unemployment report. The CPI on Thursday is due at 830 am EST. Core CPI estimates are expected to come in at 6.5% YoY, higher than the prior month's core of 6.3%. Food, rent, healthcare, electricity and natural gas have been soaring. There is little indication that these items have materially fallen in price as there are often lagging effects that take time to push prices lower despite the rate hikes. Even normal gasoline prices in southern California are back up to record levels. Malibu gas stations are selling 89 octane (the middle tier) for $7.99/gallon. Plus the supply-side remains broken thus with less supply, greater inflation.

Most all economic data continue to show we are in a recession. ISM Manufacturing New Orders Index just hit the line that has characterized a number of prior recessions. Even American Express said we are in a recession so have downgraded their earnings forecast more than once for the next year. 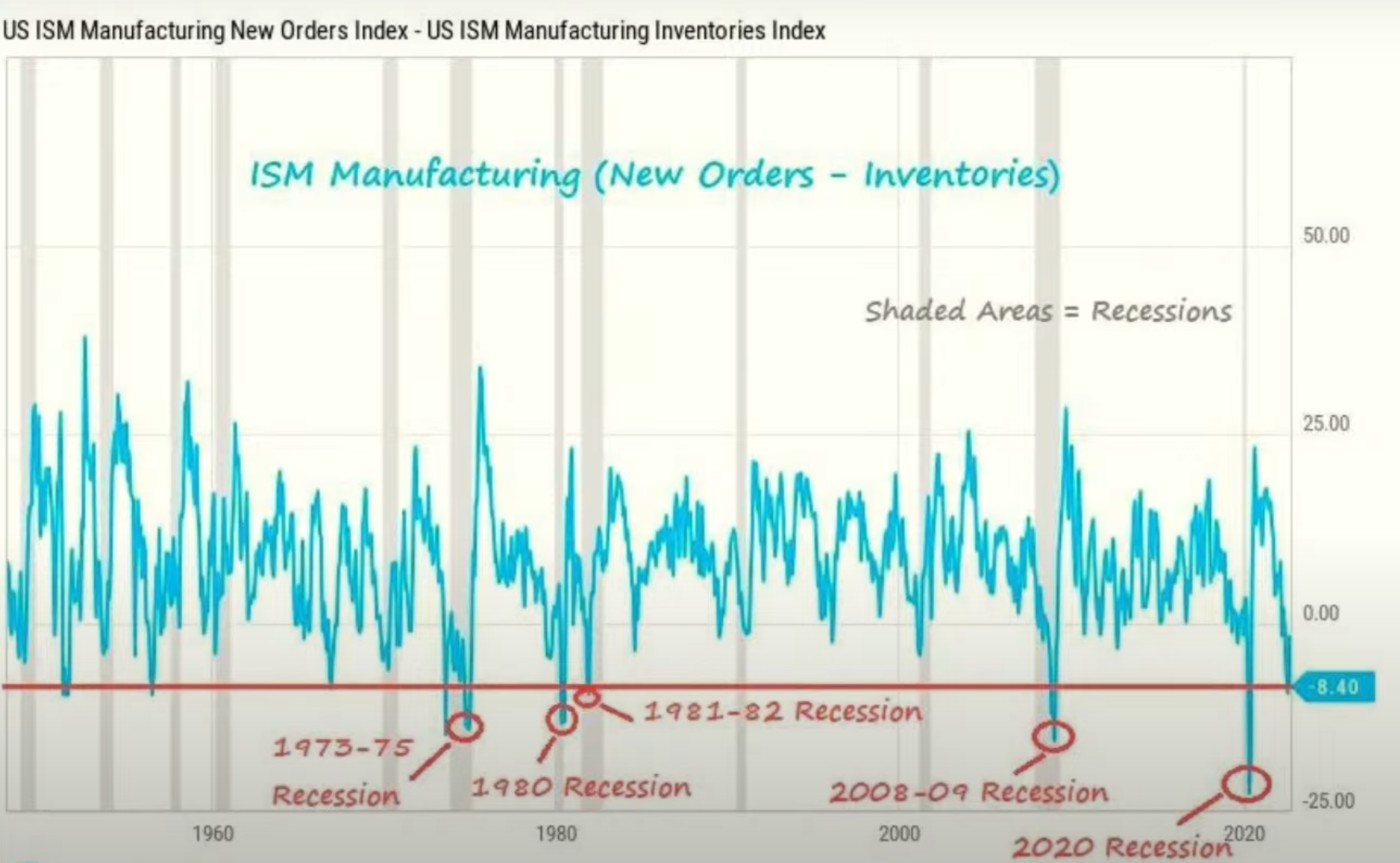 CME Fed Futures has raised the odds for a fourth 75 bps rate hike when they meet on Nov 2 to over 80% followed by a 50 bps rate hike on Dec 14. This would bring the FFR to 425-450. With market downtrends firmly in place and the DXY soaring, we expect lower markets and higher DXY until the Fed either reduces the magnitude of the hikes or gives indication as they did in Dec-2018 they would halt the rate hikes, marking a major low for both stock and crypto markets. This time, however, the bubble is far more massive to the unwinding of the bubble could be said to be at least as large as the dot-com bubble in 2000-2002 or the Great Depression bubble from 1930-1932. In both bubbles, markets continued to plummet even after the Fed started to lower interest rates.

So despite the Fed saying we are still not in a recession, keep in mind that in the second quarter of 2021, the Fed said inflation was transitory, then in the third quarter, they said inflation is rising but will likely peak soon, then in the fourth quarter they removed the word 'transitory'. In the first quarter of 2022, they went full hawkish saying they would have to hike rates aggressively to curb inflation but not to worry because the economy remains strong so a soft landing is possible. Then in the second quarter, they admitted to negative growth in the first quarter but no risk of recession. Then in the third quarter, they admitted that while the economy remains strong despite two quarters of a drop in GDP, we were still not in a recession, though a recession could happen.

With such a shockingly poor track record along with a refusal to see reality, or more likely to intentionally distort reality to prevent mass revolt, one wonders what additional gross misstatements the Fed will make in the fourth quarter.
Like what you read?
Let us help you make sense of these markets by signing up for our free Market Lab Reports:
This information is provided by MoKa Investors, LLC DBA Virtue of Selfish Investing (VoSI) is issued solely for informational purposes and does not constitute an offer to sell or a solicitation of an offer to buy securities. Information contained herein is based on sources which we believe to be reliable but is not guaranteed by us as being accurate and does not purport to be a complete statement or summary of available data. VoSI reports are intended to alert VoSI members to technical developments in certain securities that may or may not be actionable, only, and are not intended as recommendations. Past performance is not a guarantee, nor is it necessarily indicative, of future results. Opinions expressed herein are statements of our judgment as of the publication date and are subject to change without notice. Entities including but not limited to VoSI, its members, officers, directors, employees, customers, agents, and affiliates may have a position, long or short, in the securities referred to herein, and/or other related securities, and may increase or decrease such position or take a contra position. Additional information is available upon written request. This publication is for clients of Virtue of Selfish Investing. Reproduction without written permission is strictly prohibited and will be prosecuted to the full extent of the law. ©2022 MoKa Investors, LLC DBA Virtue of Selfish Investing. All rights reserved.
FOR OUR FREE MARKET LAB REPORT :