The destruction of trust and credibility is now running at breakneck speeds. What's dysfunctional? Our leadership, our economy, our markets, our institutions. Bitcoin and blockchain technologies are the antidotes to dysfunction. But many of those in power are often older with much power and influence and with little understanding of such technologies. So they fear it and want to overregulate it or have it removed altogether. While nation-states, ie, governments, can try to go after partially or fully decentralized systems, their level of success will be equivalent to that of all the court cases combined involving p2p file sharing. Millions still use p2p file transfer. The only real dent made in usage of such technologies were fair systems put into place such as iTunes and Netflix. In the end, justice systems end up only having the resources to go after the whales such as kimdotcom who was one of the first to run a p2p file sharing site, though its creator also had other legal issues pending, thus became the low hanging fruit for the government. But while they can bring down a whale or two, they are unable to go after all the pirhanna which spawn with frequency, like rabbits.

Meanwhile, businesses around the planet struggle or go bankrupt. We are in a narrative driven market- central banks are printing, people and businesses are being given money, and we will eventually have reflation as a result of the economic recovery that many are expecting starting in the spring. Herd immunity from the vaccine is unlikely until the summer at the soonest. But Powell said the resurgence in COVID-19 cases that prolong the economic lockdowns against the efficacy of a new vaccine to accelerate herd immunity leaves the outlook "highly uncertain." Indeed, if history is any guide, any optimistic estimates are almost always premature, and the actual recovery starts later as recessions tend to last longer than expected. In addition, Biden will be spending on green energy which is economically costly, thus require more QE to fuel his spending programs and subsidies.

A chart of long bond yields serves as a sober example of what has been and is happening now. Bond yields are the macro variable which present a more sober reality, compared to equity markets which are far more emotionally driven. As more money gets printed, it finds its way into stocks and bonds, thus bond yields drop and prices rise. Nevertheless, many are expecting a spike in bond prices from the inevitable inflation caused by record levels of QE. The record short positions for 30-year bond prices therefore come as no surprise. But we have not yet seen a meaningful breakout in bond yields. The general trend on long bonds since 2009 has been towards lower and lower yields. The ETF TLT which tracks the price of 20+ year Treasurys shows the general uptrend in price since 2009. A real breakout remains unlikely because the Fed has no choice but to print, pre- and post-COVID. Prior such occurrences over the last few hundred years suggests the reserve currency will continue to devalue until there is a changing of the guard into a new reserve currency. Such has traditionally been the result of war. Futures markets are expecting the Fed to move into negative rate territory for the first time by the middle of this year. Eurodollar options -- commonly used as a hedge against Fed policy action -- covered a central bank policy rate as low as negative 45 basis points by mid-2021.

The Fedspeak, in the coming months and into 2022, will indicate a need to slow QE, or even start to think about tightening, especially as inflation starts to accelerate well beyond their target 2%. This will rattle markets as always, but the levels of debt are too large for any meaningful tightening to take place. We saw what happened to the markets in late 2018 when Powell continued to shrink its balance sheet. He had no choice but to give the markets what they want in the form of renewed, fresh QE. The one variable that may make a difference to how hard or crash landing we get are the technologies in place such as AI, blockchain, and VR which are growing at exponential rates. Such wealth generation, if governmental regulations dont hamper such growth too onerously, can somewhat soften a crash landing or avert war, turning such possibilities into instead just a very hard landing. Time will tell.

While bitcoin is the store-of-value, ethereum is the everything marketplace and settlement layer for the new decentralized financial system. It represents the killer app for exchange-of-value and will easily clear $1 trillion of on-chain transactions this year.

Ethereum will eventually be upgraded to 2.0. It is the only instrument that will become both a capital asset and commodity as it can be consumed or transformed into another asset, while it will also become a store of value as it becomes deflationary thus retain its purchasing power. 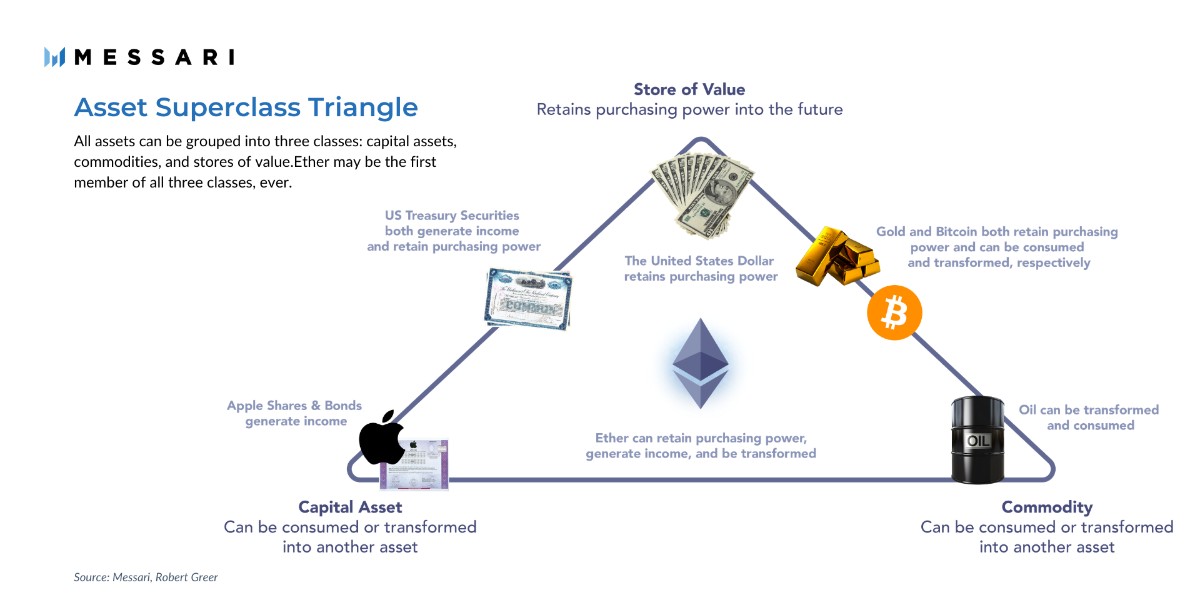 Ethereum's inflation rate should fall below zero as more people use it. Ethereum's S2F (stock-to-flow) is even higher than that of bitcoin. Stock-to-flow ratios are used to evaluate the total amount currently available of a commodity (the stock) against the amount mined that specific year of new production (the flow). The principles of supply and demand work particularly well for such cryptocurrencies which are transparent on the blockchain. In consequence, bitcoin's price has followed its S2F when it comes to the general price trends of bitcoin, so ethereum's price is also likely to follow its S2F trajectory. 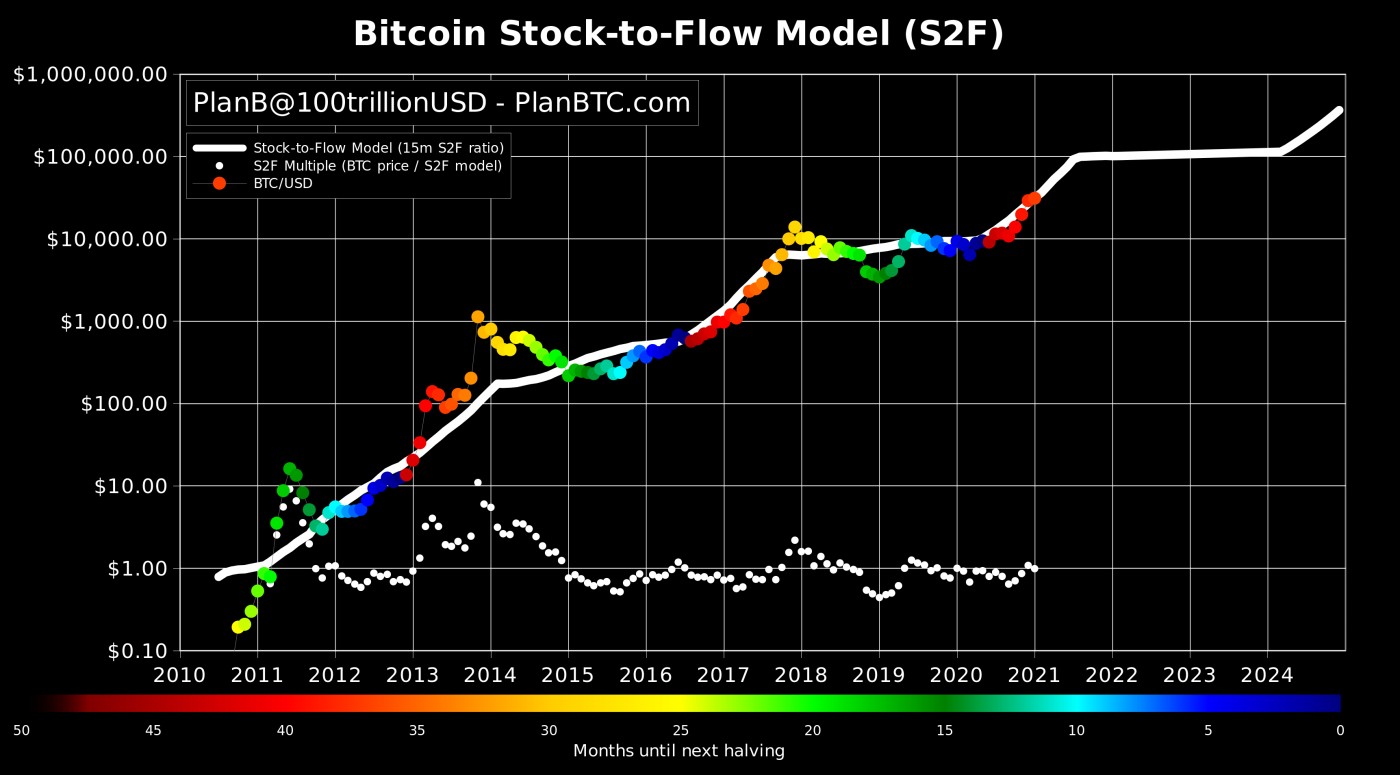 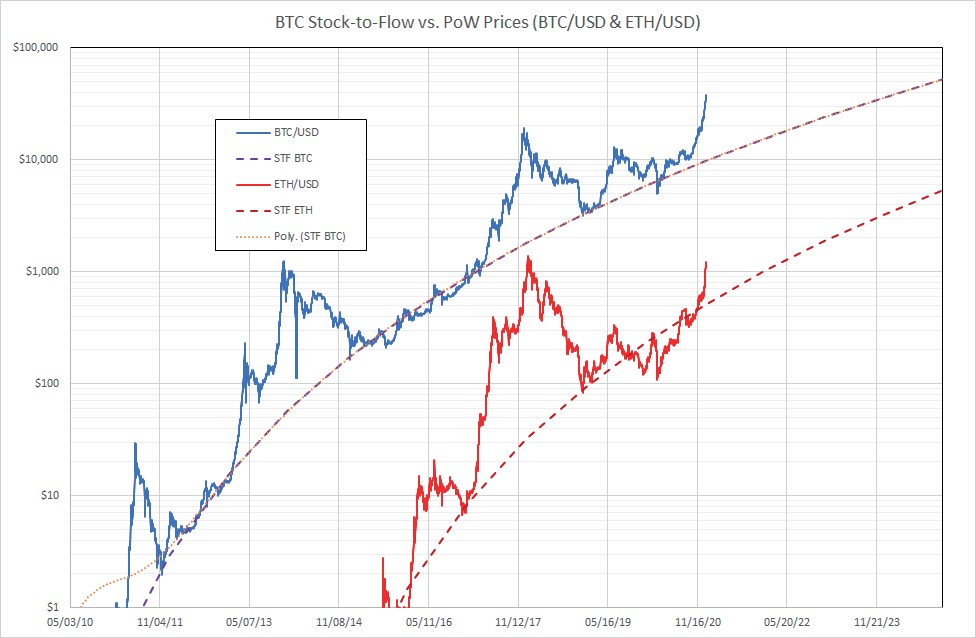 The number of active addresses in bitcoin also correlates roughly with its price. The same should also happen with ethereum. 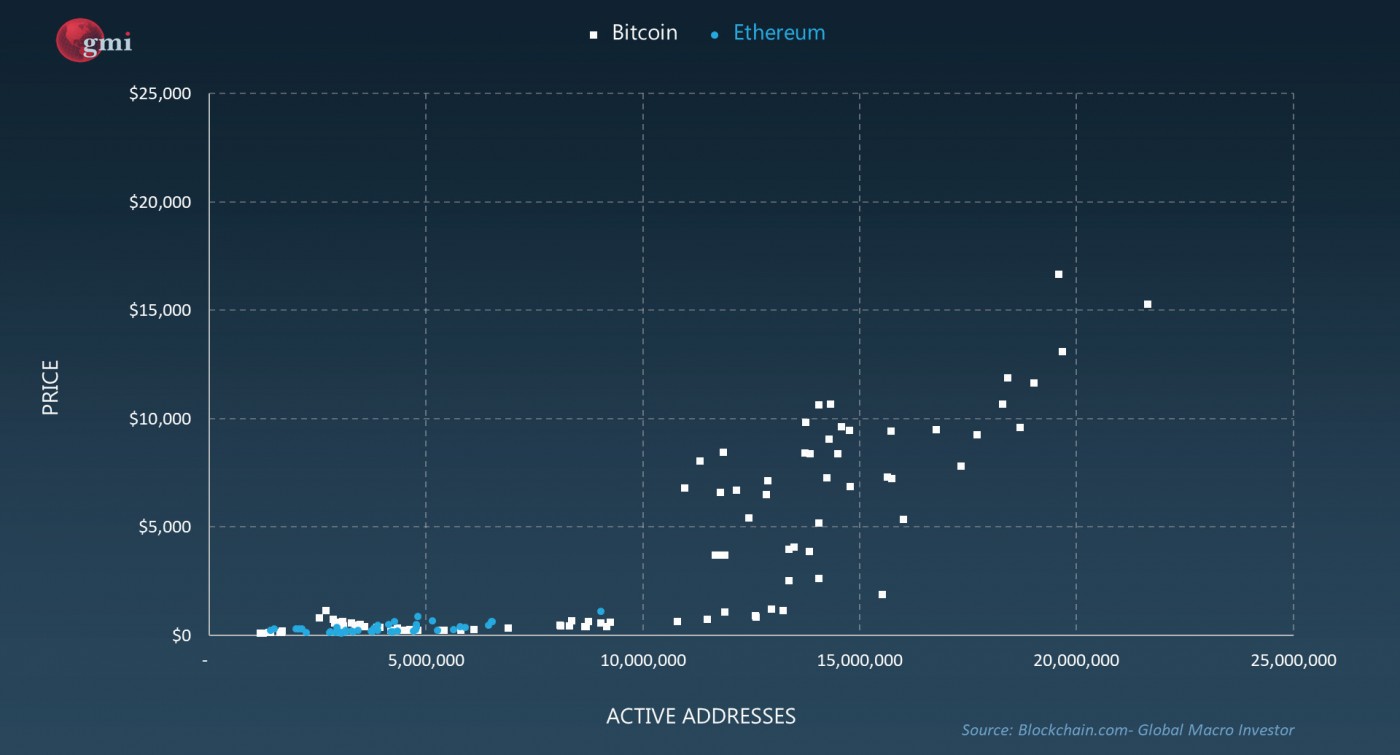 <Ethereum expanded from the above chart> 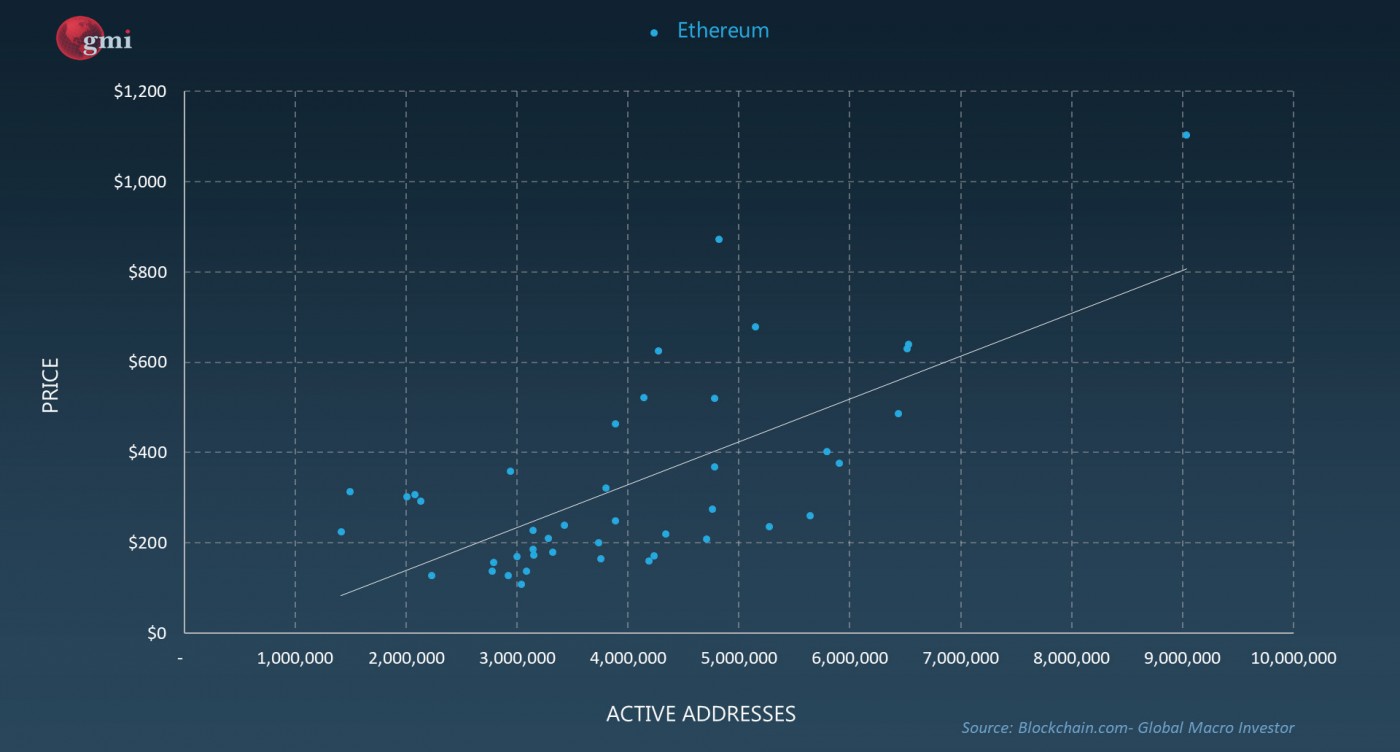 Ethereum in its current form is a PoW (proof-of-work) platform. Miners fees tend to be high. As it upgrades to 2.0, it will move from PoW to PoS (proof-of-stake) which will reduce overall fees substantially. In PoS, security costs very little so transaction fees are burned which drives the scarcity of Ethereum. With Bitcoin, it achieves its scarcity through its hard cap which is the total issuance of a coin that will be created. Bitcoin is disinflationary in that fewer and fewer coins are minted up to the maximum of 21 million (less the total amount lost), while Ethereum 2.0 can be deflationary as it is designed to get more and more scarce over time as more coins are burned than minted.

Many DeFi applications need Ethereum (ETH) on which to operate as ETH is the oil in the engine. ETH is the most trustless asset on Ethereum. ETH will therefore always have a monetary premium based on the trustlessness it offers DeFi applications as collateral. We have seen DeFi explode in value from $1 billion last June to over $25 billion today. USDC, Tether, and other off-chain assets exist on ETH. Volumes are at all-time highs.

Fixed-rate DeFi, unsecured lending, and yields driven lower by competition will all contribute to massive growth in the DeFi market in the coming year. When people lock up their coins, they get a handsome yield in a world of near zero interest rates.

With Ethereum, anything of value can be digitized. In the future, you will be able to tokenize the legal deed to your house, your car, and even the name of your website, plug it into DeFi, then borrow against it.

The number of companies that continue to build on ETH give ETH the network effect compared to any other crypto protocol, so its future value over the next couple of years should easily hit $50,000, or at least a near 50-fold move from where it is currently priced. Grayscale's ETN ETHE premium has dropped to near all-time lows so offers strong risk/reward at this time, above and beyond that of GBTC. For those who wish to avoid ETF risk since the premium would likely vanish once the SEC gives the okay on a bitcoin ETF, one may wish to buy ethereum directly. PayPal is one simple option, otherwise google keywords "how to buy ethereum" for a list of viable options.
Like what you read?
Let us help you make sense of these markets by signing up for our free Market Lab Reports:
This information is provided by MoKa Investors, LLC DBA Virtue of Selfish Investing (VoSI) is issued solely for informational purposes and does not constitute an offer to sell or a solicitation of an offer to buy securities. Information contained herein is based on sources which we believe to be reliable but is not guaranteed by us as being accurate and does not purport to be a complete statement or summary of available data. VoSI reports are intended to alert VoSI members to technical developments in certain securities that may or may not be actionable, only, and are not intended as recommendations. Past performance is not a guarantee, nor is it necessarily indicative, of future results. Opinions expressed herein are statements of our judgment as of the publication date and are subject to change without notice. Entities including but not limited to VoSI, its members, officers, directors, employees, customers, agents, and affiliates may have a position, long or short, in the securities referred to herein, and/or other related securities, and may increase or decrease such position or take a contra position. Additional information is available upon written request. This publication is for clients of Virtue of Selfish Investing. Reproduction without written permission is strictly prohibited and will be prosecuted to the full extent of the law. ©2022 MoKa Investors, LLC DBA Virtue of Selfish Investing. All rights reserved.
FOR OUR FREE MARKET LAB REPORT :