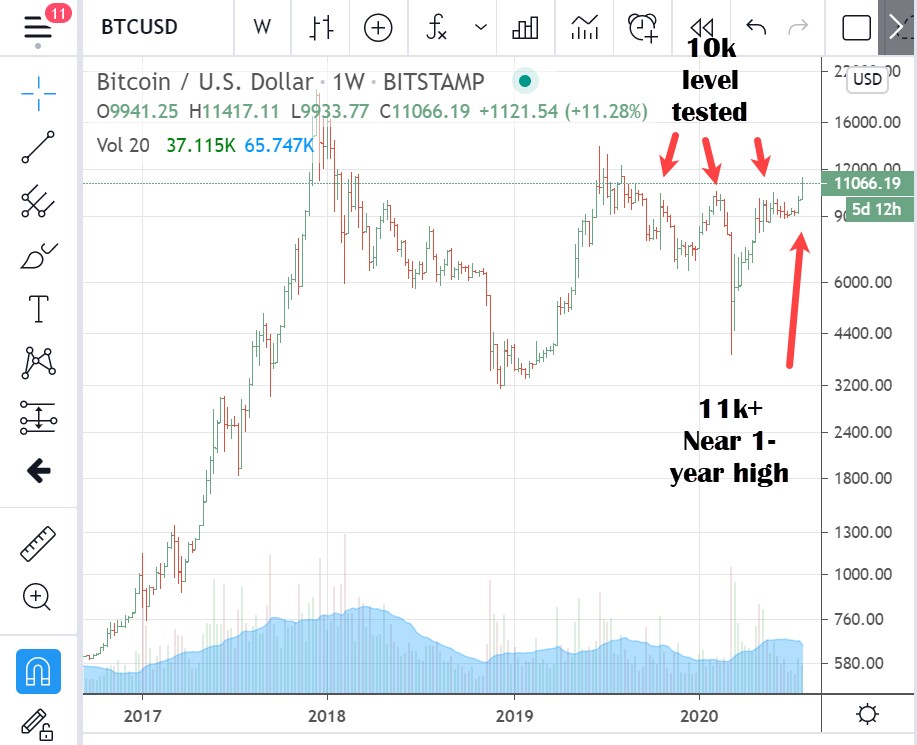 Patience pays off. BTC and ETH finally broke through their resistance levels. BTC knocked at its 10k level 3 times, and now appears to have broken through this major level of resistance.
ETH finally broke above the BTCETH downtrend as shown on a price chart for the first time since the top of 2017. The top alt coins have moved appreciably higher. That said, this time, investors are a bit more discriminating so of the 2000+ alt coins that still trade of the more than 6000 that have been listed, only a handful have had major moves. I have listed some of these in the Crypto Reports section of the website with their respective prices at the time each was added to the crypto list. Keep in mind that these vehicles have volatilities far exceeding that of most all stocks, so handle with care and understand your personal risk tolerance before taking a position. 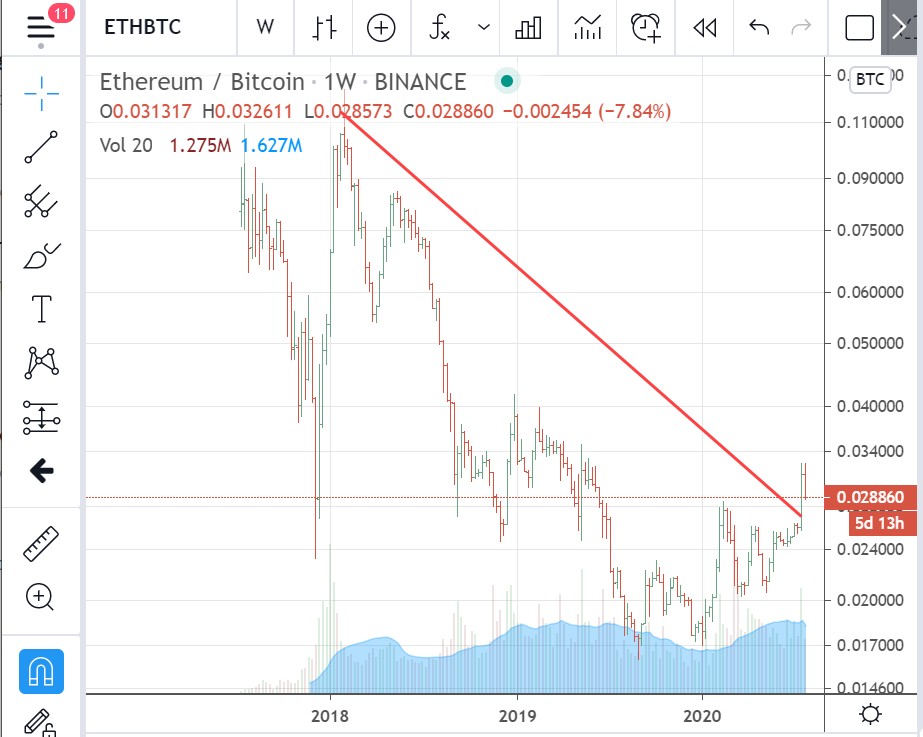 Gold hit new all-time highs touching $2000 for the first time on Tuesday, with silver playing catch up as it had been lagging gold. With news levels of quantitative easing at the ready, the U.S. dollar dropped several percent in a month's time against the euro and the pound. But the dollar is likely to rebound as the Bank of England and the European Central Bank will have no choice but to further increase their levels of QE.

Newmont Goldcorp (NEM) is the world's largest gold producer by market value. It gapped higher on Monday, pulled back on lower volume on Tuesday. It's earnings have been skyrocketing so odds favor a strong earnings report.

Barrick Gold (GOLD) is the world's second largest gold miner. It too gapped higher on Monday, pulled back on lower volume on Tuesday. Higher gold prices together with increased production despite its closure of a mine in Papua New Guinea should help when it reports earnings August 10 ahead of the open.

Over in Asia, Huaan Gold ETF, Asia's biggest gold ETF, has seen its assets under management soar more than 68% this year. It is a reflection of investors trying to move their fiat currency into a more stable asset. In a counter move that should further spur upside moves in both bitcoin and gold, China's regulators are attempting to more fully control capital flow as the Chinese banking sector is having serious issues with some Chinese banks on the verge of collapse. New regulations out of China are preventing people from taking out their money to prevent a run on their banks as this will facilitate a collapse.

With gold soaring, some Chinese are trying to get their money out to buy precious metals or precious metals indices but are not allowed in a growing number of cases with the new regulations. Regulators cite the recent collapse of oil prices as a scare tactic against its citizens even though this is comparing apples and oranges. They are trying to scare the public into holding fiat for their own safety for fear of collapsing prices in gold just as happened in oil, after all, the government knows what is best for you, right? In consequence, the Shanghai Gold Exchange said on Tuesday that since gold and silver holdings were high, it would take risk-control measures if warranted to protect investors. How's that for double speak? It's always about the government protecting investors, just as the fear of the weapons of mass destruction and the pre-planned Gulf of Tonkin was used to justify war as declassified documents have shown. Fear is a most powerful weapon.

This move by the Chinese government somewhat rhymes with FDR in the 1930s when he made all Americans turn in their gold, and made it illegal to have more than a token amount in one's possession. Present day, most U.S., U.K., and E.U. banks still will not have anything to do with bitcoin on the basis that it is too risky. The real reason is the fear that bitcoin will steal increasing amounts of market share away from the dollar, the pound, and the euro. You can serve in the military, that's not too risky. But bitcoin? That's too risky. Hold fiat instead. In reality, cryptocurrencies represent freedom for the individual.

The Chinese government is currently trying to spread its propaganda by calling the buying of precious metals "dirty speculation". In Venezuela, those who buy other currencies including bitcoin to get their savings to safety are called traitors, saying such actions are destroying their national currency.

As a rule, as soon as a national currency has problems, government will force people to hold onto the national currency otherwise such people will be labeled dirty, greedy speculators. Remember that one can have their physical assets nationalized in certain countries especially as a currency plummets, or as Ray Dalio has shown, the wealth gap soars which has at times resulted in a forced redistribution of wealth. Meanwhile, bitcoin is virtual.

The world sits at a point where money can be printed at will by a few guys in power while the buying power of one's savings is eroded. Then when you try to buy gold, perhaps it will become increasingly difficult as a growing number of governments stand in the way as a consequences of their weakening fiat currencies. In some countries, real estate is not safe. If there is a forced redistribution of wealth, it could be taken from you. Unconfiscatable property such as bitcoin  which cannot be politicized is the only truly safe method of storing and keeping value should the situation worsen. Of course, one must take precautions in terms of safely storing their crypto.

In the final analysis, many governments are propaganda machines especially when situations become dire. We have seen how numerous governments have dealt with COVID, flailing about wildly, forcing house arrest and economic lockdowns in many parts of the planet. Mainstream press together with exaggerated fatalities paints quite a shocking picture, focusing on the tragedy of COVID deaths. Meanwhile, the health consequences that have nothing to do with COVID will tower over the total number of deaths from COVID itself. Stress is a silent killer. Bankruptcies, lost livelihoods, domestic violence, and skyrocketing rates of depression and suicide are just the ice cube on the iceberg. The global economic lockdown is creating unconscionable second order effects.

As one example, just earlier this week, it was reported by the U.N. that the number of child deaths every month has jumped. Every year, around 9 million people worldwide reportedly die of hunger. This number is now soaring due to food supply chain breakdowns caused by economic lockdowns spurred by COVID. Virus-related restrictions have made it harder for farmers to sell food at markets and for critical food and aid supplies to reach communities. The result is a major increase in the number of kids suffering from malnutrition all over the world – from Latin America to sub-Saharan Africa to the Middle East.

Over in tech stocks, Mongo DB (MDB) operates a database platform made up of geographically distributed databases to ensure no single point of failure. Continuous backups and point-in-time recovery as well as full security are standard. It had a pocket pivot through a confluence of its 10-, 20-, and 50-day lines. Such a technical confluence is often bullish.

One group that continue to outperform in the work-from-home group. Stanford economist Nicholas Bloom shared some head-spinning stats on the accelerating work-from-home economy:

“We see an incredible 42 percent of the U.S. labor force now working from home full-time. About another 33 percent are not working – a testament to the savage impact of the lockdown recession. And the remaining 26 percent – mostly essential service workers – are working on their business premises. So, by sheer numbers, the U.S. is a working-from-home economy. Almost twice as many employees are working from home as at work.

“More strikingly, if we consider the contribution to U.S. gross domestic product based on their earnings, this enlarged group of work-from-home employees now accounts for more than two-thirds of U.S. economic activity.”

Stocks that we have  mentioned that should continue to benefit including FSLY which operates an edge cloud platform for processing. Volume in Fastly (FSLY) is drying up along its 10-dma and 20-dema. It's had an explosive move so far, but with all the liquidity in the system, the stocks with RS of 98 or 99 often continue higher as strength begets strength.

Zoom Video Communications (ZM) which is the leader in video conference calls also appears to be trading in a calmer manner as it digests steep gains made since March.

Docusign (DOCU) which enables businesses to digitally prepare and execute agreements had a pocket pivot on Wednesday off its 10-dma after trading sideways for a few weeks to digest sharp gains.

Again, if any of the above continue their sharp uptrends, you will show profit relatively quickly much as Livermore once wrote in his books. And since RS is very high, riding such an uptrend can yield strong profits over a period of weeks. If you can contain risk to 3% or less, you're in that stronger a position since all it takes is one strong uptrend to more than compensate for small losses.

That said, we had a cluster of distribution days so should market weakness persist, smaller positions in non-precious metal stocks or the sidelines sometimes are the safer place.