If you wish to learn how best to sidestep or profit from the next market correction, skip ahead to the last paragraph.

Quantitative easing known as QE has been at all-time record levels. On Thursday, both the European Central Bank and Bank of Japan kept their monetary policy stances neutral. The Bank of Japan made no changes to its policy stance, but did acknowledge that reaching its 2.0% inflation target will take at least until fiscal year 2019 while inflation during fiscal year 2017/18 is now expected to hit 1.1% vs. est 1.4%. The European Central Bank left its monetary policy unchanged.

Inflation remains stubbornly low as lack of demand in these sluggish economies remains. Hiking rates, ie, reducing QE, seems further off, thus the record levels of QE may remain for a longer period than expected. The US market will continue to benefit from QE as the sovereign debt bubble grows.

With the help of QE, the corporate sector has been the main buyer of US stock since the market low in 2009. This aging and artificially induced bull market that began in 2009 has been driven by this ongoing institutional buying. When a company buys back its own stock, this decreases the number of shares used to calculate EPS, thus earnings are artificially inflated, thus this sovereign debt bubble which began in 2009 continues to grow. 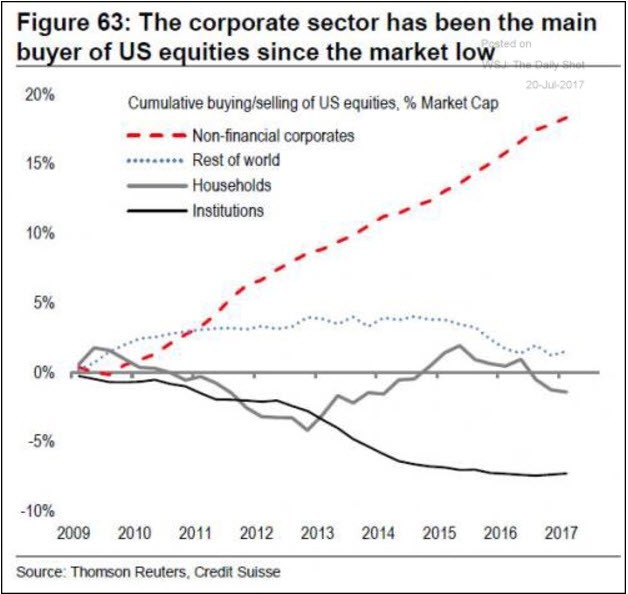 Since the start of global Quantitative Easing, $20 trillion of sovereign debt and equities have been placed on central bank balance sheets, with over $5 trillion of investment grade bonds trading at negative interest rates in a failed attempt to renormalize real and nominal GDP growth rates. Any additional rate hikes by the US Federal Reserve could burst the debt bubble as there is what is known as "proportionality" to interest rates which are still near all-time lows. It wouldn't take much to flatten the yield curve by raising 3-month Treasuries another 75-85 basis points, or another three 25 basis point rate hikes which includes this December's expected hike. The debt bubble would likely burst before then since a 75 basis point increase would almost double the cost of short term loans which would hamper the economy, reversing the recovery the Fed has attempted to engineer via QE. But the Fed's hands are tied as they attempt to refuel the interest rate tank by continuing to hike rates. Meanwhile, global central banks sit on their hands unable to taper their respective QE programs due to lack of demand as noted by lagging rates of inflation.

Since 2009, this "kicking the can" by central banks will come at a steep price. But trying to predict the bursting of bubbles is futile as the future does not exist. One must instead remain in the present, taking in price/volume action in real-time in the major indices and in leading stocks such as those on our Focus List. Price/volume clues have always presented before any serious market corrections or crashes. One will notice their stops being hit, pushing them into the safety of cash. This applies to every major market crash since 1929. Even a seemingly sudden onset of major market weakness such as the flash crash of 2010 left price/volume clues, enabling the Market Direction Model to switch to a sell signal. Indeed, both timing models stand at the ready. Market Direction Model (MDM) has a long-standing track record at profiting from such periods by switching to a sell signal. Meanwhile, the VIX Volatility Model (VVM) has greatly profited during such periods as shown in backtests. Keep in mind that the VVM is a far more aggressive model than the MDM thus when big profits accrue as they did earlier this year with the model up as much as +52.4%, some may choose to use their own trailing stops and personal profit objectives to determine when to take at least partial profits or limit losses as nothing goes up in a straight line, especially when it comes to the VVM. Of course, if one prefers a less aggressive approach than the VVM, the MDM may be more suitable. MDM is up almost +50% over the last 12-months as shown here.