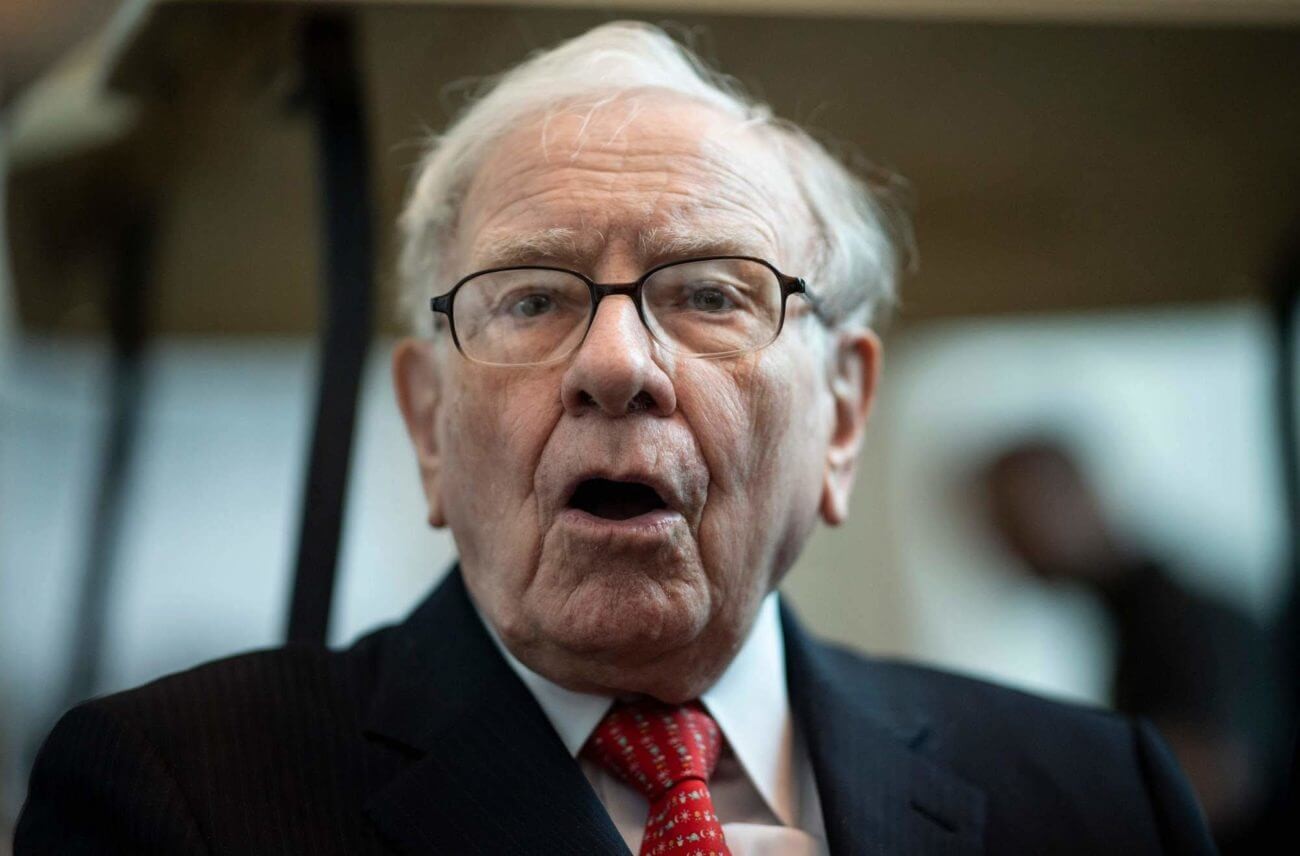 As we have reported, Buffett has bailed on banks and bought gold despite having said in prior years, “(Gold) gets dug out of the ground in Africa, or someplace. Then we melt it down, dig another hole, bury it again and pay people to stand around guarding it. It has no utility. Anyone watching from Mars would be scratching their head.” Didn't he say something similar about bitcoin having no utility?

He most recently warned of the coming collapse in the stock market. To measure stock market valuations, Buffett divides the Wilshire 5000 Index by the GDP of the U.S. The historical average of the indicator is 1. It currently stands at 1.7, just 0.1 away from the all-time high of 1.71 at the height of the dot-com bubble. He uses this as the basis for his conclusion that the stock market is close to collapse. But again, he misses the bigger picture. Historically, sovereign governments end up hyperinflating their way to collapse, thus stock market prices as well as the price of goods and services continue to soar before the megabubble blows apart.

Overprinting which can spur hyperinflation can threaten the dollar's sovereignty as the world's reserve currency. Buffett is correct in saying that printing our way out of too much debt can lead to a dollar crisis. A collapse in the dollar would drive the price of bitcoin and hard assets through the roof. No country wants this since so much is tied to the dollar. The other option is to hike interest rates which would bring on a financial crisis.

But what could trigger a collapse in the dollar?

Restored levels of confidence which would increase spending would trigger higher prices in a hurry, much as happened in 1920s Germany. At first, when people were scared, they held tightly onto their German marks. But when things started to look better and they started to spend, prices shot through the roof as the massive amount of money that had already been printed made the German central bank helpless to soaring prices. The situation is similar today. Trillions have been printed but not spent as M2 velocity which has been plummeting illustrates, while M1 money supply has been skyrocketing. But M2 velocity will start to rise once confidence is restored among consumers. Then the U.S. Federal Reserve either can helplessly watch as inflation soars, or go the Paul Volcker route and start tightening the money supply by way of hiking interest rates as he did starting in the late 1970s, peaking near 20% in the early 1980s. Doing this stabilized the value of the dollar.

The problem as Ray Dalio of Bridgewater and renowned futures trader Ed Seykota pointed out in his book, "Govopoly" is that we are too far down the rabbit hole to pull back. Hiking rates given historically high levels of debt would be catastrophic for stocks, bonds, and hard assets. Bitcoin would probably suffer the least. Bitcoin’s real competitive advantage is sovereignty. With growing geopolitical uncertainty, there is an increasing demand to hold money or wealth outside political systems.

Thus, the Fed is highly likely to continue to pursue the money printing path as it cannot risk undoing more than a decade worth of rate reductions and rising debt. Dalio shows central banks of leading fiat currencies historically never choose austerity when things get to extremes just as they are today. Austerity does not win politicians reelection, a serious structural flaw. got partnership with akro for defi dex as cross chain platform

Ultimately, the weakening dollar will drive the price of bitcoin higher. Bitcoin mining has increased which further increases bitcoin’s level of security which further spurs capital into bitcoin.
Things remain unwell. New unemployment claims spiked to 1.1m up from 963k the prior week. Consumer confidence hit new pandemic lows. Many households have been in forbearance of property which delays a housing crisis, so there is political support for more stimulus to avoid such a crisis. A perceived strong economy will be critical for Trump’s reelection since people always vote with their pocketbooks. A stimulus bill is likely to pass to get more money into the economy as the Fed is doing an anti-Volcker move of allowing higher inflation which will further weaken the dollar.
China and Russia Ditch the Dollar?

Given the state of the dollar which hangs in the balance as the world's reserve currency, China and Russia are looking to abandon the dollar. China's bank regulator warned dollar dominance is the seed of the crisis. So when the dollar's stability is undermined, the whole global economy is threatened. Quantitative easing of the dollar erodes its value and threatens its stability. This is unusually direct rhetoric from Chinese officials about the dollar's dominance. The sanctions and trade war are spurring this rhetoric. Normally, the situation would be sugar coated by Chinese officials.

World trade is in dollars. Oil is in petrodollars. Most countries have deposits, reserves, and debt in dollars. Trade is in dollars. Even so, the dollar's share of China-Russia trade settlements has plummeted from 90% in 2015 to under 50% today. Dollars started to go downhill once Nixon killed the dollar-gold peg. It's a long process for a fiat currency to topple as Ray Dalio of Bridgewater has nicely illustrated going back 500 years over numerous cycles.

Recently, an increasing number of Chinese banks have been going out of business. Dollar dependency is China's biggest threat. But even if China and Russia create their own financial system, who would want to put their wealth there? The same could eventually be said for the dollar as fiat continues to fall.

Politically neutral, uncontrollable, unfreezable cryptocurrencies such as bitcoin have the edge. As a general rule, you wont bring wealth to your country if you're stuck in your own native currency. Only international transactions can bring wealth because you can then sell your goods and services worldwide. Eventually, with cryptocurrencies, you may not have to give a deep cut to your local dictator. Currently, if you are allowed to do international transactions, you have to give a cut to government, or you wont get that necessary bank account needed to do business.

Because of the situation with ultra low interest rates, investors have been flocking to C-grade junk bonds because they cant get much yield from higher grade bonds. Nascent companies in decentralized finance are bringing much needed solutions. With the emergence of defi and its decentralized apps and platforms, they exist in cyberspace because they have utility, much as peer-to-peer file sharing has existed since the 1990s, much to the deep chagrin of the U.S. government. The size of the DeFi space is skyrocketing since the amount of locked capital broke $1 billion a couple months ago. Current locked capital now stands at nearly $7 billion and shows no signs of slowing. Through blockchain technology, people can get yields of several percent or more by staking their money since blockchain brings trustless efficiencies of speed and lower cost while providing security and privacy. People can also get uncollateralized loans.

One company that has been on my cryptolist, Aave (LEND). As an investor, I have had a keen interest in DeFi. The space is swiftly evolving beyond most people's expectations. The UK's FCA just granted Aave an electronic money transfer license for non-custodial lending and borrowing. Aave can now offer services such as issuing digital cash alternatives and providing payment services. The CEO said "The objective was to help Aave Ecosystem to access payment accounts and on-board users into DeFi. Electronic Money Institution is the same authorization that Coinbase and Revolut have in Europe. It will mostly support on-boarding new users into the Aave Ecosystem and to the decentralized protocol over time. Aave will pilot in the U.K., before rolling out to cover the whole EEA and expanding globally, enabling users to go from fiat to stablecoins and other assets natively in the Aave Ecosystem and then use these assets in the Aave Protocol." This is the key bridge between fiat and crypto that will enable mass adoption. You can now give Aave your fiat, and they in turn give you interest of a few to several percent or more depending on your risk tolerance. Yield farming is going to be huge. And the rates of interest paid out far exceed the near zero or in some cases negative yields banks are paying. Trillions of dollars sit in such near zero yielding accounts worldwide, so since people eventually vote with their pocketbooks in terms of where they put their money, at least some of these trillions will flow into the DeFi space.

Aave is also bringing a number of ground breaking services to market including the tokenizing of mortgages. In the not-so-distant future, you will go to a DeFi decentralized exchange to take out a tokenized mortgage/real estate loan locked in as collateral. You will be able to finance your house through tokenized mortgages, selling to the global retail market. Call it crowd funding on steroids. Aave has partnered with RealT among others. Aave is up several hundreds of percents since I added it to the list in May. Indeed, crypto is bringing financial freedom via bitcoin and decentralized finance.
Like what you read?
Let us help you make sense of these markets by signing up for our free Market Lab Reports:
This information is provided by MoKa Investors, LLC DBA Virtue of Selfish Investing (VoSI) is issued solely for informational purposes and does not constitute an offer to sell or a solicitation of an offer to buy securities. Information contained herein is based on sources which we believe to be reliable but is not guaranteed by us as being accurate and does not purport to be a complete statement or summary of available data. VoSI reports are intended to alert VoSI members to technical developments in certain securities that may or may not be actionable, only, and are not intended as recommendations. Past performance is not a guarantee, nor is it necessarily indicative, of future results. Opinions expressed herein are statements of our judgment as of the publication date and are subject to change without notice. Entities including but not limited to VoSI, its members, officers, directors, employees, customers, agents, and affiliates may have a position, long or short, in the securities referred to herein, and/or other related securities, and may increase or decrease such position or take a contra position. Additional information is available upon written request. This publication is for clients of Virtue of Selfish Investing. Reproduction without written permission is strictly prohibited and will be prosecuted to the full extent of the law. ©2021 MoKa Investors, LLC DBA Virtue of Selfish Investing. All rights reserved.
FOR OUR FREE MARKET LAB REPORT :