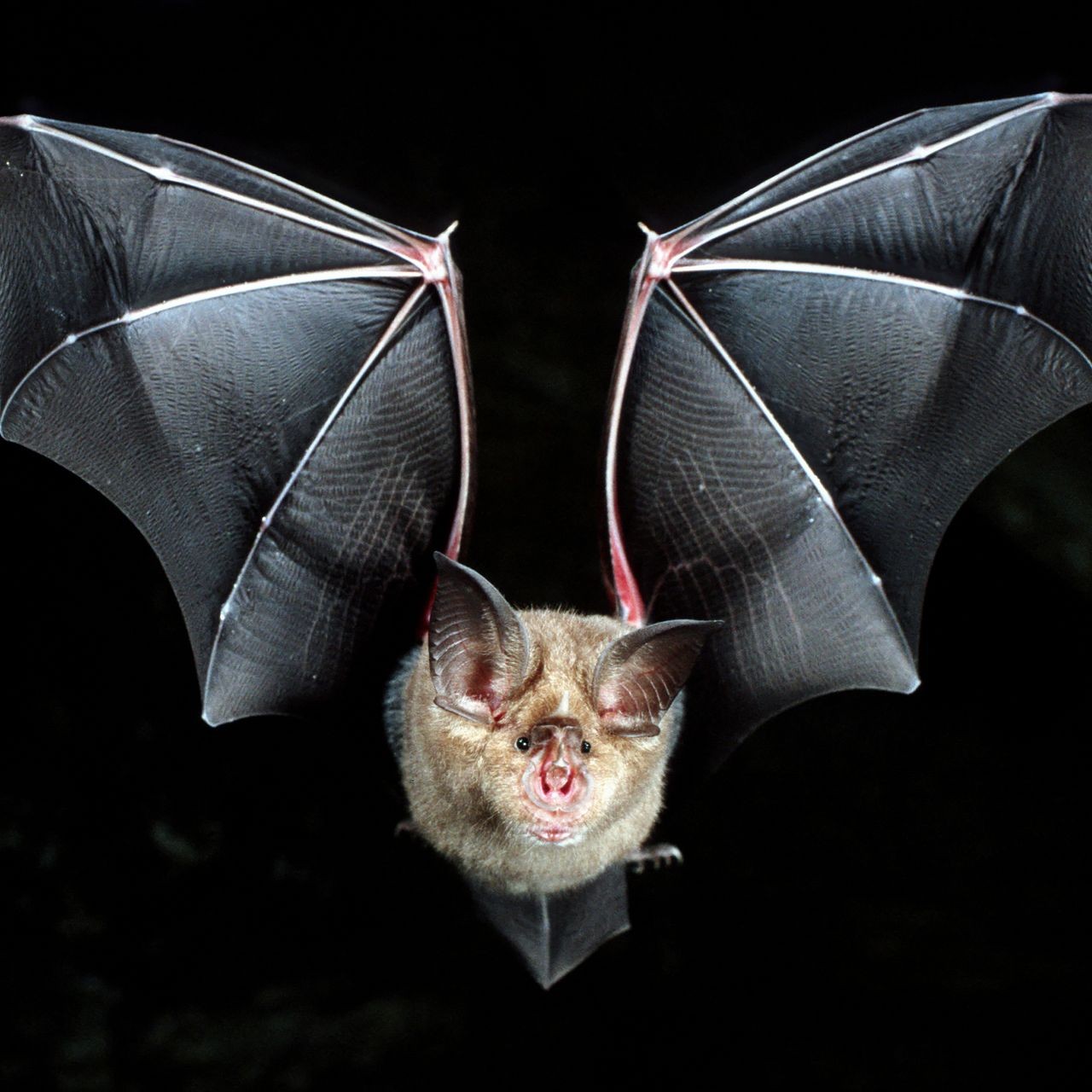 Welcome to the New Bull Market?

The mainstream media has been painting such a dire situation which has politicized the coronavirus. As a consequence, the world has economically locked down. Profits have come to a grinding halt while bills continue to pile up. And there is debate as to when the lockdown in major countries such as the UK and Germany will end despite being past the peak of new cases. It has been asked whether the number of new cases should be at zero before the lockdown is lifted. The lockdown affects individuals paying living expenses and businesses with their ongoing burn rates. Fire-sale bargains will abound in certain oversold stocks and industry groups, keeping in mind that certain major transformations may now be underway as a result of the corona crisis thus one must be selective as to which oversold stocks and groups are actual bargains. We should then experience a huge economic rebound after a dismal first and second quarter.

That said, issues abound. The rebound will not recover all the losses. Today is different than in prior times. For example, during World War II, the U.S. amassed unprecedented levels of debt. But we were a creditor nation at the time. The U.S. government did not bail out the people. The people bailed out the government. It raised taxes dramatically, borrowed money from the people via war bonds, then the people were paid back after the war. Now, a material number of people are broke, companies are broke, governments are broke. The money that gets printed does not add value if it's just printed into existence without taking from taxes. Instead, taxes have been hugely reduced via cuts and incentives. As Alan Greenspan said a few years ago, "This cannot end well." All of this totals to the infamous saying, "There is no free lunch."

So given the magnitude of QE, how do we grow our way out of this mess? Governments must provide incentives to companies to keep them going, to doing things in a more efficient and improved manner, which cause price and demand to rise, thus is inflationary due to actual growth. Things must be domestically produced which increases employment which forces competition which forces companies to pay employees more and charge more for their products, thus removes depressionary tendencies. Otherwise fiat will continue to debase from endless QE without growth. Inflate or debase.

In 2008, the Federal Reserve took leverage off its balance sheet. In recent times for a number of years, we would have had negative GDP if QE did not exist. Most QE-created capital was not towards R&D but towards artificially propping up stock and real estate prices which doesn't add real value. Stock buybacks were at record levels.

Now regarding the current market bounce, some markets can bounce for a while, but notice how the Dow did not recover more than half of its fall each time the market bounced. Dead cat bounces often recover roughly one-third to one-half of their losses before rolling over again. But I said dead cat. This dead bat bounce may be undead, representing dying free markets, enabling them to resume their long standing QE-driven bull that began in early 2009, like a walking zombie that winds its way higher with less regard to metrics such as price/volume action. 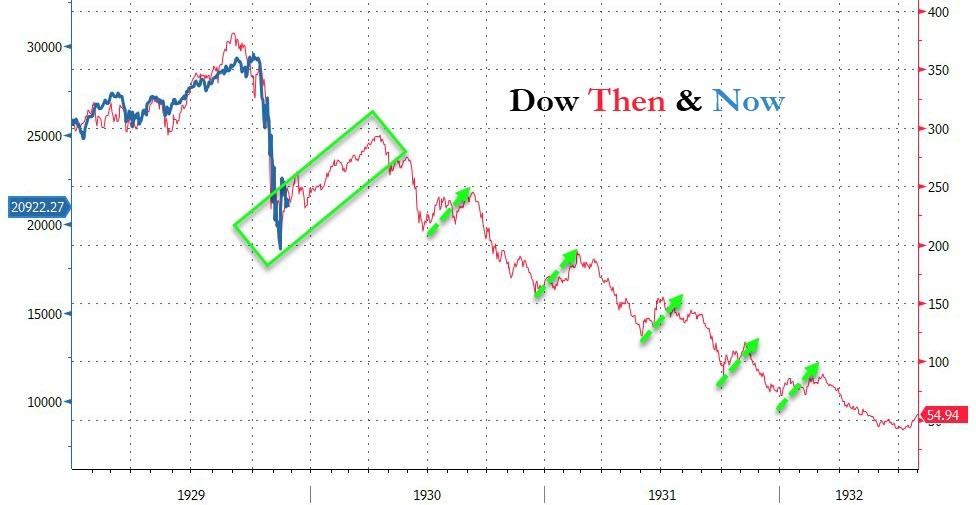 Given the unprecedented levels of QE with the discount and fed funds rates near 0%, the markets don't have to retest lows made in March as the amount of QE being created by the Fed is unprecedented, so in a way, this time is indeed a bit different. We could get a V-shaped recovery much as we did starting in Dec-2018 after the Christmas Crash when Fed Chair Powell announced QE would be at the ready giving the markets what they wanted. 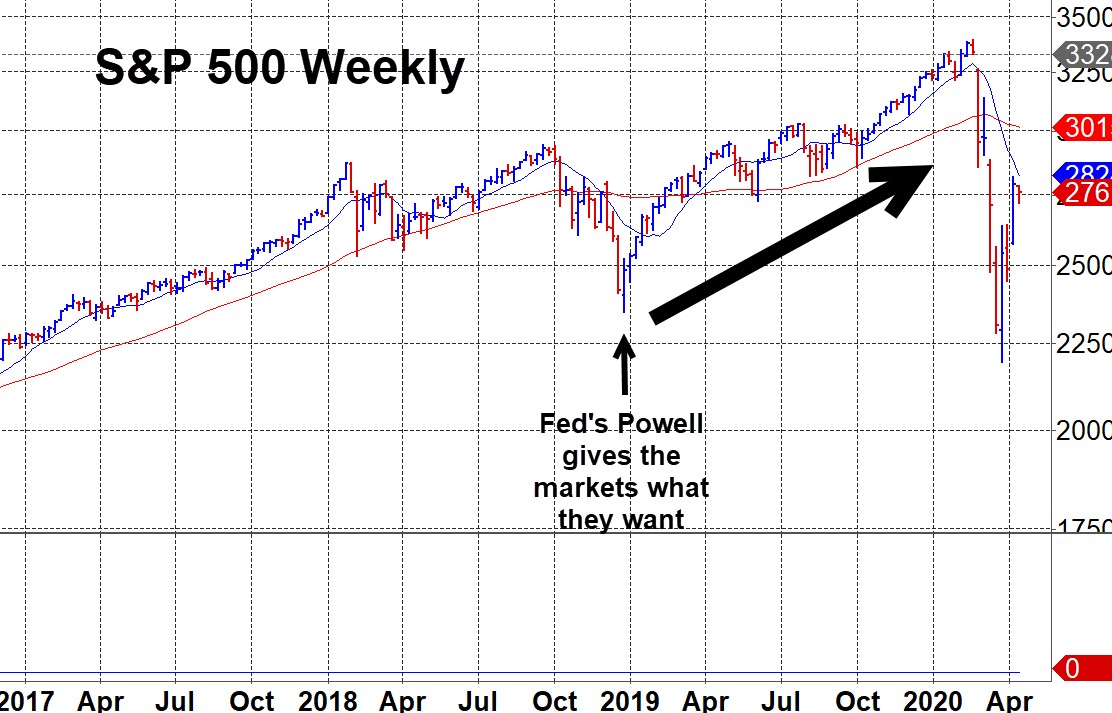 This would also be somewhat equivalent to June-1932, early 1938, or March-2009 when markets bottomed due to deeper reductions in rates and accelerated levels of QE. Before their major lows, they all had retested prior lows made weeks earlier because the Fed was slower to act in terms of unleashing liquidity. Dec-2008 would be the closest comparison to today. Back in Dec-2008, the discount rate was reduced to 0.5% but not 0%, though the Fed Funds rate was near 0% as today. At the Fed meeting on November 25, 2008, QE1 was announced, but the Fed had already inflated their balance sheet by more than $1 trillion. 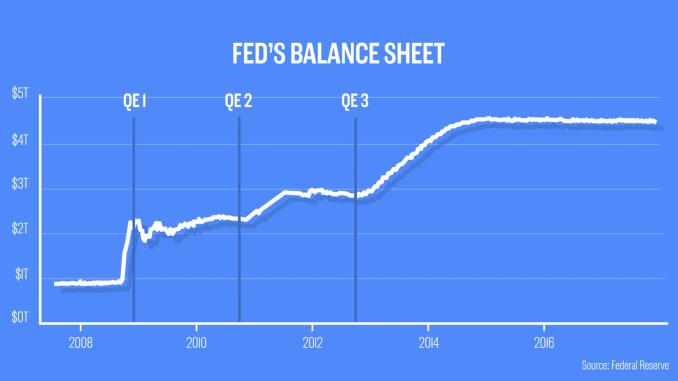 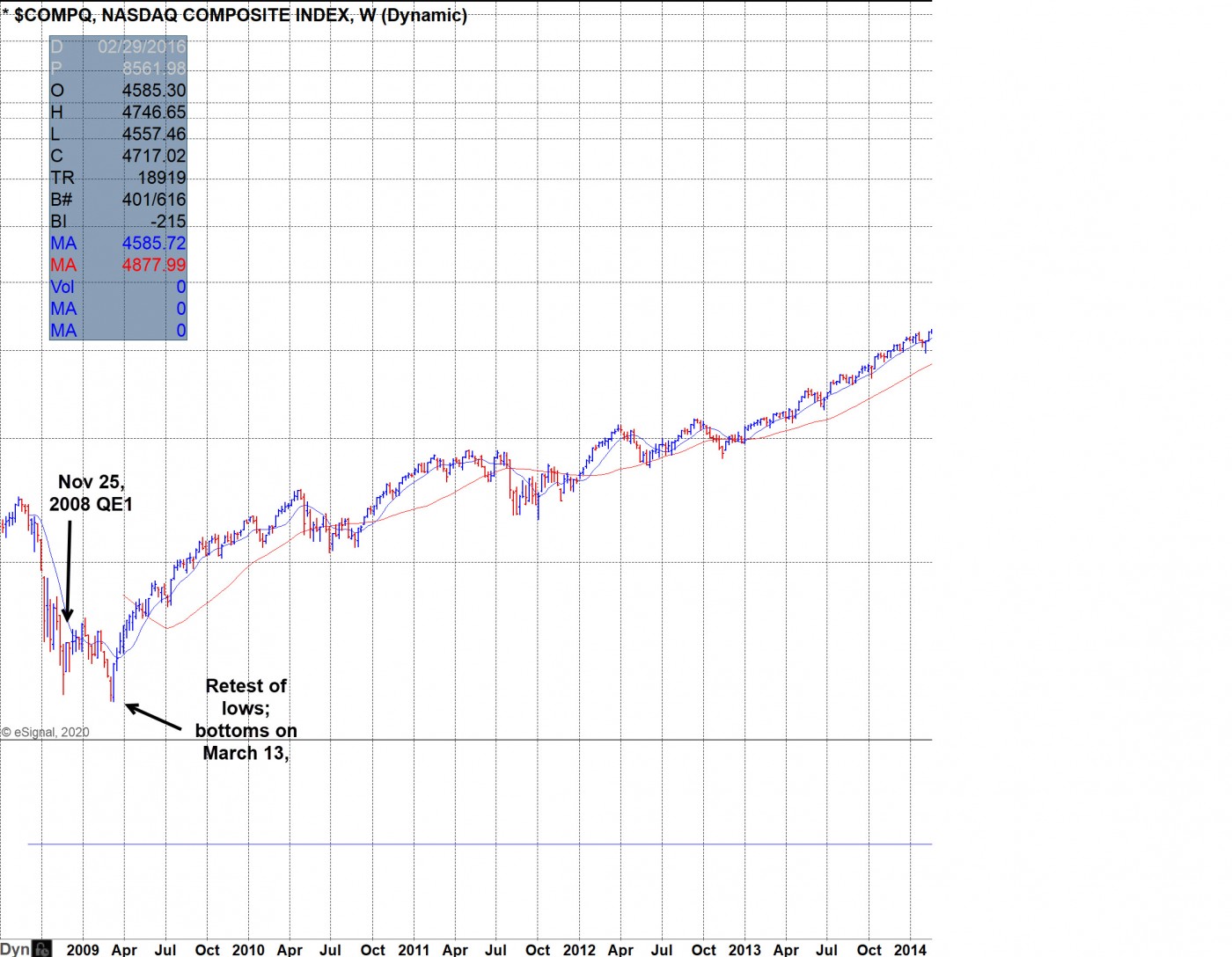 Today, the Fed is acting faster than ever.

It is already buying bond ETFs including JNK and other high yielding ETFs. It's only a matter of time before they buy stock ETFs to keep the markets propped. 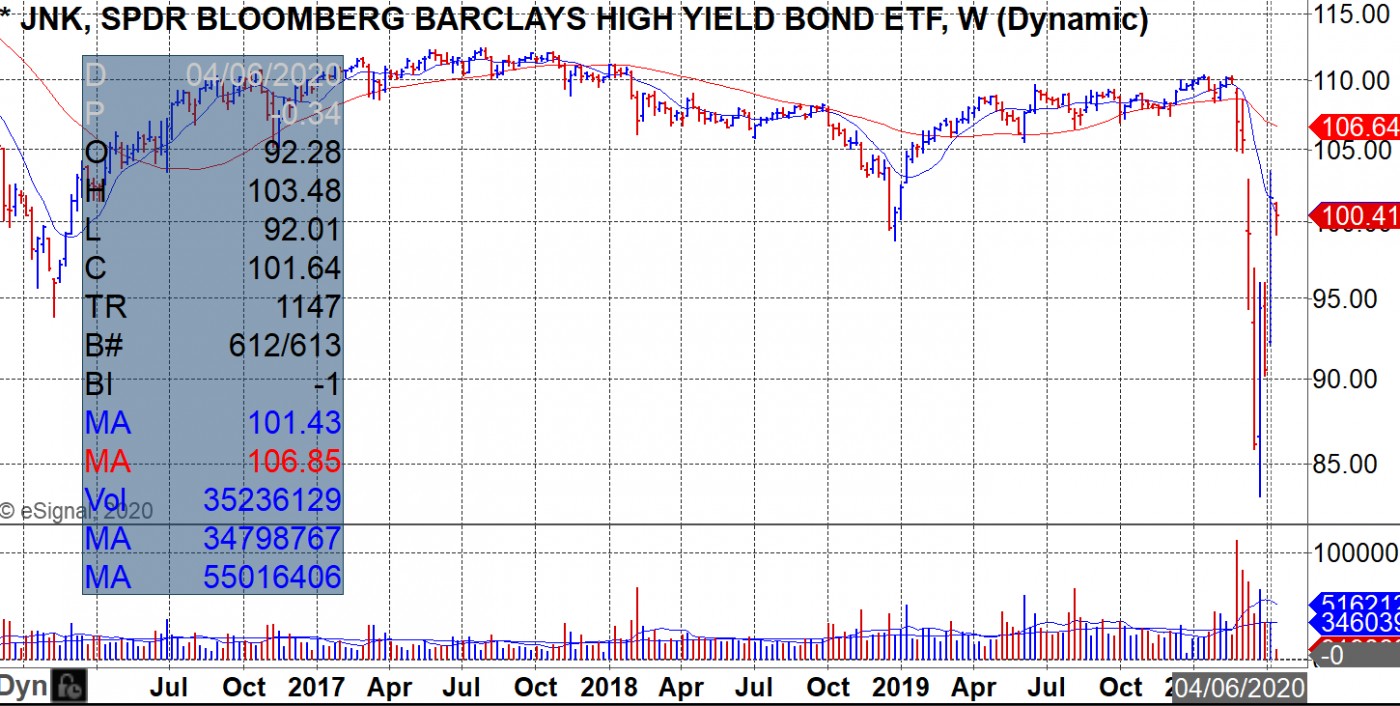 The Fed is also buying corporate bonds. As an example, Ford was downgraded on March 24, 2020 and as a result its bonds are surging as the Fed comes to the rescue.

=It's been said: "We will have a horrible Q1 and Q2 resulting in huge revenue, GDP, and earnings losses" - My response: Markets are attempting to price this in.

="Big bounce coming in Q3" - Markets are forward looking and attempting to price this in.

="China not back to normal yet" - Give it some months as signs of normal business activity are starting to return. Markets are pricing this in as they are forward looking by several months.

="S&P 500 overvalued" - Its valuations can become even more overvalued given the nearly limitless liquidity.

="Commodities platinum:gold ratio not bottoming yet" - While commodities can go higher due to a cheaper dollar, this will take time for the world's reserve currency to devalue in this manner. It is far more likely lower prices ahead due to demand shock.

="Fear/sentiment levels are nowhere near the levels seen at past market bottoms" - Nearly limitless liquidity changes everything. QE since 2009 has resulted in stock market corrections of less than -10%. The rare times U.S. markets corrected -20% such as in late 2015 then again early 2016 was due to QE having been ended. An additional factor of a weak Chinese economy added to the selling pressure. Remember, there were three QE programs and an Operation Twist. In between these programs, the stock market corrected.

="Japan printed its way to a doubling Nikkei by 2016 by depreciating the yen starting in 2011" - Yes, but Japan is a creditor nation while the U.S. is a debtor nation which puts pressure on the dollar in the long run. Nevertheless, US major market averages can continue higher with nearly limitless liquidity without having to retest March lows despite second order effects. If there is no retest of March lows, this would be a new data point in history as a consequence of nearly limitless liquidity. The major stock market averages went straight down in record time. We are going straight up in record time as well.

=It's been said: "There will be a lasting demand shock as there are big losses to individuals and businesses despite bail-outs" - My response: While this is true, nearly limitless liquidity will artificially push stock markets higher as the excessive capital has to go somewhere. Bonds and stocks are the beneficiaries. Meanwhile, fiat debases which helps gold and bitcoin.

="Forced transformation of some industries" - COVID-19 accelerates the development of AI, AR/VR (WorkFromHome), medical, and e-learning/education, and at-home entertainment, among others. The alt-currency FAANG stocks should thrive: AMZN, AAPL, GOOGL, FB, NFLX.

The major U.S. stock market averages may very well repeat history and retest then undercut lows set in March by a potentially large amount as they price in the economic damage done by the global lockdown. A second wave of panic selling could occur where everything gets sold off hard again. But this may take time to materialize or not materialize at all for reasons I have cited. Instead, U.S. stock markets can go a lot higher without retesting March but with sharp corrections along the way due to the realization of second order effects. Nevertheless, a shift back into a messy bull market with sharp occasional corrections is more likely given nearly limitless liquidity. The discount and fed funds rates remain near 0%. CME Fed Futures expect this to continue out to at least a year, pricing in probabilities at 100%.

Keep a close eye on bitcoin and gold. Gold lost 1/3 of its value in 2008 but was the first asset to recover its losses. With deep fiat debasement, expect both to shine. The bitcoin halving is in May. This has been overall a bullish event before and after for bitcoin, though we now have a recession of some magnitude which could affect crypto. The question will be how deep and how long the recession lasts. Near limitless liquidity suggests a deep but shorter recession. Also expect the leading stocks which are the new alt-currencies to resume their uptrends. Fiat will continue to debase so this is bullish for bitcoin, gold, and palladium, but QE-created capital has to go somewhere so this is also bullish for stocks and bonds as the Fed is also busy buying.

Some historical days of note near the lows of 2009 which came in March, a few months after QE1 was announced, as history often rhymes:


(͡:B ͜ʖ ͡:B)
Like what you read?
Let us help you make sense of these markets by signing up for our free Market Lab Reports:
This information is provided by MoKa Investors, LLC DBA Virtue of Selfish Investing (VoSI) is issued solely for informational purposes and does not constitute an offer to sell or a solicitation of an offer to buy securities. Information contained herein is based on sources which we believe to be reliable but is not guaranteed by us as being accurate and does not purport to be a complete statement or summary of available data. VoSI reports are intended to alert VoSI members to technical developments in certain securities that may or may not be actionable, only, and are not intended as recommendations. Past performance is not a guarantee, nor is it necessarily indicative, of future results. Opinions expressed herein are statements of our judgment as of the publication date and are subject to change without notice. Entities including but not limited to VoSI, its members, officers, directors, employees, customers, agents, and affiliates may have a position, long or short, in the securities referred to herein, and/or other related securities, and may increase or decrease such position or take a contra position. Additional information is available upon written request. This publication is for clients of Virtue of Selfish Investing. Reproduction without written permission is strictly prohibited and will be prosecuted to the full extent of the law. ©2020 MoKa Investors, LLC DBA Virtue of Selfish Investing. All rights reserved.
FOR OUR FREE MARKET LAB REPORT :