From a recent interview with Bridgewater's CEO Ray Dalio, he says he believes in this environment most investors think safe is cash which he calls tragic. As one of many examples, Germans in the EU's most powerful country Germany, have the equivalent of over $3 trillion in savings they conventionally believe is safe. Meanwhile, fiat is being debased at a faster and faster rate with each passing year. What used to be safe is no longer. History is littered with examples of hyperinflation and crashing fiat. While such periods are rare, they do occur during highly unusual events. The world has been building toward such an event. Never has debt been so high and interest rates been so low. 5000 years of interest rate history is illustrative of this. 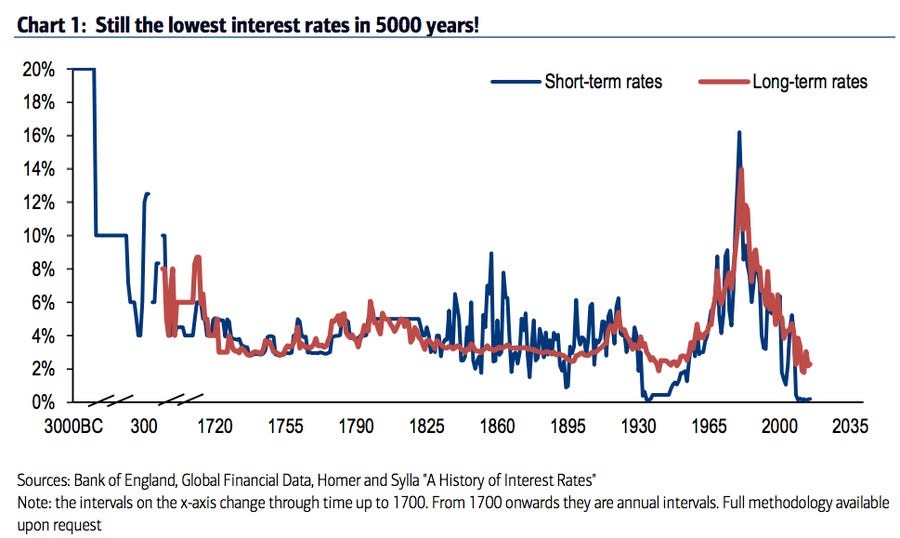 Dalio says one must think differently from one's habit. The things he has brought up are not commonly thought about. But one must study the lessons of history and what is likely to take place. When he did that going back 500 years, he could see that more now than ever in this long term debt cycle, the depreciation of the value of money and storehold of wealth is increasingly likely. He says cash can be the most risky asset as it depreciates in value, so one has to start thinking about different asset classes for safe diversification. He says central banks will not let default happen so will continue to print money. So the USD will continue to depreciate along with other fiat currencies. While Japan printed its way starting in 2011 to doubling the Nikkei by 2016, it did so by depreciating the yen, so Nikkei stocks doubled in value relative to the yen. But the main difference between the U.S. and Japan is Japan is a creditor nation while the U.S. is a debtor nation while holding reserve currency status. So the major market averages can continue higher with limitless liquidity without having to retest March lows, despite second order effects, but it will be a choppy rise.

The Fed has said this will not be a V-shaped recovery, and notable investors such as Jim Rogers have said the worst bear is yet to come. Second and third order effects include huge revenue and earnings losses, sharp drops in GDP with years before GDP reaches old highs, demand shock from lack of spending, big losses to individuals and businesses despite bail-outs and low taxes, and the forced transformation of some industries. Prior to COVID, since 2009, the major averages had the rare -20% correction whenever QE ended. For example, markets corrected roughly -20% in late 2015 then again early 2016 due to QE3 ending in 2015 so there was no QE safety. The Chinese economy was also very weak at that point, adding fuel to the fire. That said, just because QE is in place doesn’t mean the market cant correct -10%. The situation today suggests with record levels of QE globally, with the U.S. market remaining the tallest standing midget, major averages may find shallow floors as they have done since the Fed nuked the planet with QE in March of this year. Meanwhile, gold, bitcoin, and residential real estate will continue to benefit.

Among stocks, those exposed to exponentially growing areas of technology such as AI, VR, and medical will benefit the most. Such stocks include the FAANG names and MSFT as well as AMD.

In the CPU wars, since 2018, the price of INTC has risen roughly 33% while AMD has gained over 400%. Intel was forced to reduce the price of its processors by 50% as the reception to its latest chip was lackluster. Meanwhile, AMD's Zen processors are stealing market share. In addition, Apple will move away from using Intel CPU's for it's Macs over the next 2 years by developing it's own ARM based processors. Despite its market share, Intel's management seems to be unable to keep pace with cutting edge tech as there appears to be an emerging structural weakness in it's ability to innovate and compete, while AMD is more successfully creating chips with greater utility. 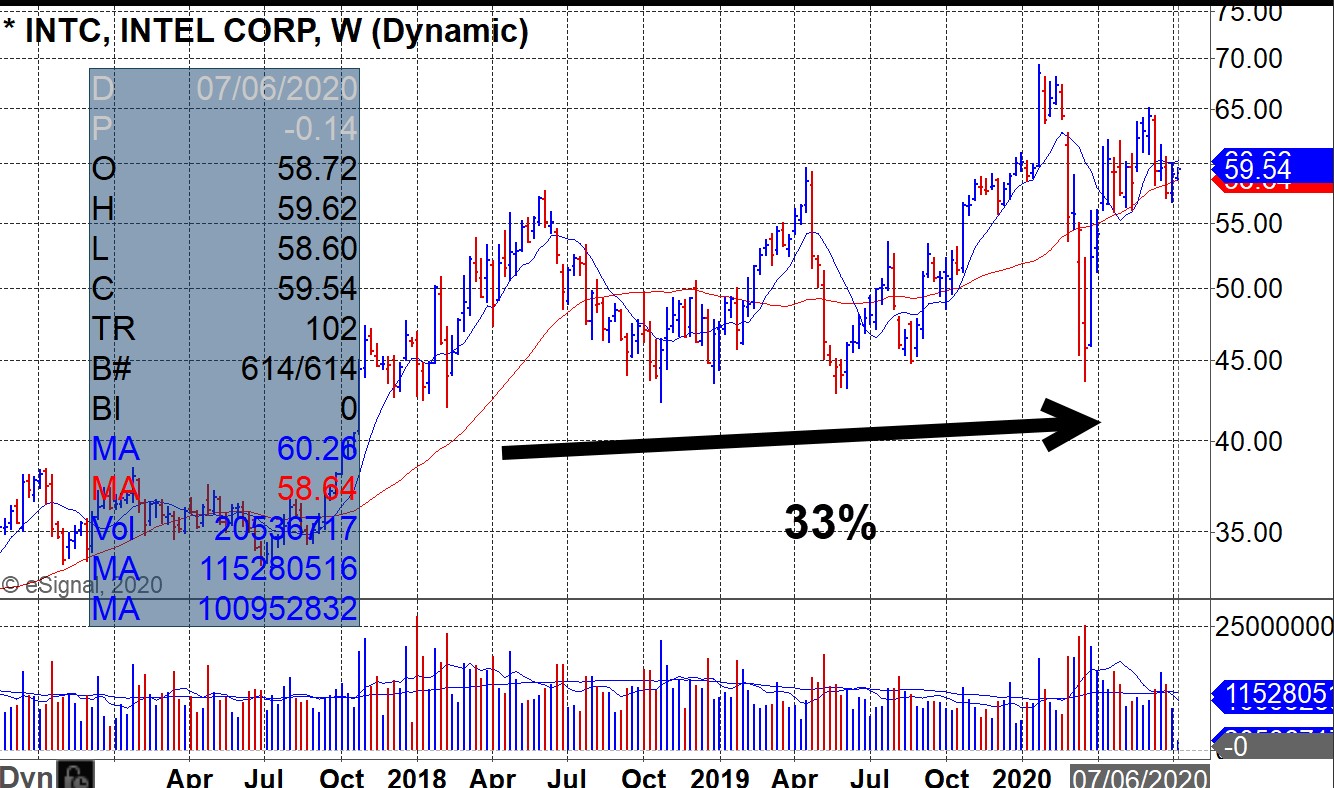 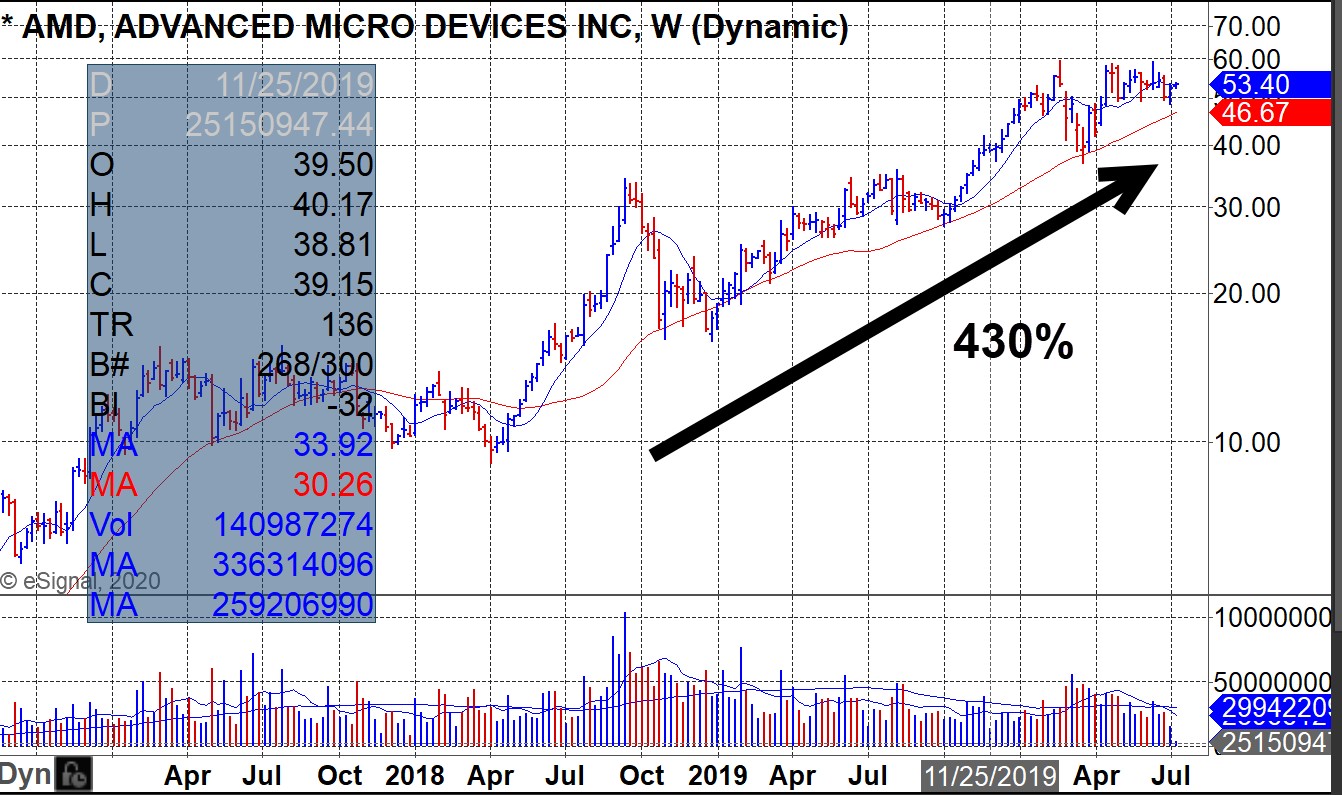 This example illustrates why while fundamental research is important, combining both fundamental and technical analysis is key. One then greatly increases the odds of being right and making money. I've seen investors fall in love with a stock but if the price says otherwise, this means they are probably wrong so should sell at least half if not the whole position. If the price of a stock relative to its peers and the general market cannot keep over a period of weeks to months, that is a red flag. If the price of a stock gaps lower on material news, that is a red flag. At the latest or if you are a longer term trend follower, if it has violated the 7-week rule, sell.

As the money printing party rages on, precious metals continue their uptrends. We reported once again on gold and on gold's younger brother silver in recent reports. When plotted on a weekly chart going back several years, gold and silver correlate. But since the start of 2019, gold has well outpaced silver most likely due to gold being the main fear trade in this era of accelerating QE. The stock market made a major low in Dec-2018 when Fed Chair Powell stepped in and said he would do what it takes to insure market stability, or in other words, would further expand the sovereign debt bubble. Gold has risen approximately 40% since the start of 2019 while silver has only risen about 18%. Meanwhile, silver generally moves faster than gold in both directions in prior markets. Whether or not the gold:silver ratio compresses enabling silver to catch up to gold, both metals are in uptrends. Individual stocks such as silver miner PAAS may well outperform both metals, so one could diversify by buying a gold ETF, a silver ETF, and individual precious metals stocks. Powell has said he doesnt see interest rates rising until after 2022 so expect the uptrends to continue in precious metals.