In 2013 in one of our meetings in London, Vitalik Buterin was entertaining the question, "What if, with the power of modern information technology, we can encode the mission statement into code; that is, create an inviolable contract that generates revenue, pays people to perform some function, and finds hardware for itself to run on, all without any need for top-down human direction?"

This was my introduction to the concept which was beyond intriguing to me. Decentralized Uber, decentralized Amazon, decentralized Ebay, decentralized Twitter. Today, just 8 years later, the number of digital organizations capable of generating real economic activity are growing exponentially and are jurisdictionless, ie, out of the hands of governments. There are currently hundreds of such DAOs all operating with their own platforms, upending old school legacy systems as the efficiencies of far fewer people required at far greater efficiencies wins capital investment.

To further fuel exponential growth, DAOs are about to employ what Reid Hoffman in his book calls blitzscaling. Hoffman writes, "Blitzscaling is a strategy and set of techniques for driving and managing extremely rapid growth that prioritize speed over efficiency in an environment of uncertainty. Put another way, it’s an accelerant that allows your company to grow at a furious pace that knocks the competition out of the water." Bill Gates, anyone? Microsoft has been notorious since its early days for releasing software before it was properly debugged. This kept them ahead of the competition. The largest companies today that blitzscaled include Amazon, Facebook, Uber, and AirBnB.
So rather than taking the careful, conservative approach, blitzscaling emphasizes growth above all else. The cost of moving too slowly is greater than the risks of rapid capital allocation. Achieving a substantial network effect is key to prevent competitors from spending their way past you to a point where you become less competitive.
Crypto is hypercompetitive due to its open-source nature. Any platform can be copied and pasted, thus getting to scale quickly is essential. Uniswap was forked into Sushiswap which is a relevant competitor. Many DAOs have large warchests of capital that should be used for growth to attract more users yet remain dormant. If DAOs spent just 10% of their treasury via a grant committee (as everything is done by consensus), they still would have 10 years in the worst case to spend their entire treasury which is a couple centuries in crypto time. This assumes no growth nor additional adds to the treasury. Far more likely, the quality DAOs will generate millions of dollars in revenue per year thus decreasing the burn rate for treasury funds.

Capital should be spent on building the most user-friendly tools to encourage mass adoption. AOL and Netscape did this in the early days of the internet to win the retail market. Attract the best smart contract auditors to minimize any potential setbacks as reputation is everything. Further, eyeballs are key. There are plenty of billion dollar DAOs that can sponsor a major league sports team or high value commercials such as one that airs during the Super Bowl.
Embracing the highest levels of transparency that blockchain enables, DAOs have provide real-time balance sheets and P&L’s to view the financial state of a protocol. This can encourage further investment as investors have access to far greater and higher quality data which can then be analyzed and properly discussed by armies of analysts. Separate grant committees could exist for product, marketing, and research to allocate treasury capital appropriately.
DAOs are just getting started with seemingly limitless potential. Far greater efficiencies at far lower cost and far fewer human beings needed to maintain the platform make DAOs transformational.

ETH Inflation Rate Craters
Before EIP-1559 was implemented on Aug. 5, Ethereum's annualized daily inflation was hovering between 2.7-3.0%. ETH's inflation rate has since plummeted to an annualized emission rate of under 1% since the EIP went live. EIP-1559’s impact on ETH’s inflation is the equivalent of two BTC halvings. 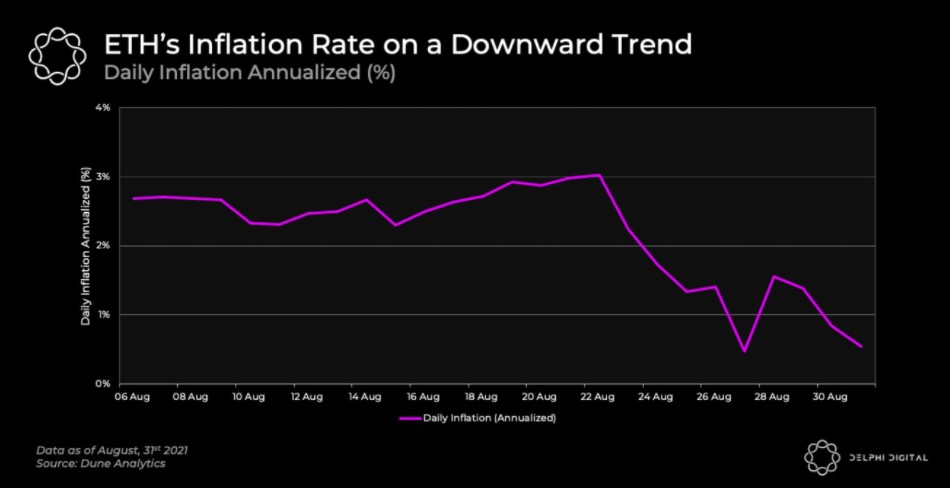 In the first 25 days since EIP-1559, approximately ~150,000 ETH (~0.13% of Circ.) has been burned. NFT auctioneer OpenSea’s contracts alone contributed to 30.67% of all ETH burned as OpenSea surpassed $3 billion in transaction volume as of this writing [Sep 1]. The NFT craze is single-handedly driving ETH burns higher.
Flash Crash

The flash crash was caused by futures open interest and spot margin borrowing, both which were peaking. Both markets combined created enough liquidations to flush the price. Several billion dollars were liquidated across futures exchanges and leveraged spot positions. If you're going to use leverage, make sure your liquidation point is sufficiently well below prior major areas of support.
Like what you read?
Let us help you make sense of these markets by signing up for our free Market Lab Reports:
This information is provided by MoKa Investors, LLC DBA Virtue of Selfish Investing (VoSI) is issued solely for informational purposes and does not constitute an offer to sell or a solicitation of an offer to buy securities. Information contained herein is based on sources which we believe to be reliable but is not guaranteed by us as being accurate and does not purport to be a complete statement or summary of available data. VoSI reports are intended to alert VoSI members to technical developments in certain securities that may or may not be actionable, only, and are not intended as recommendations. Past performance is not a guarantee, nor is it necessarily indicative, of future results. Opinions expressed herein are statements of our judgment as of the publication date and are subject to change without notice. Entities including but not limited to VoSI, its members, officers, directors, employees, customers, agents, and affiliates may have a position, long or short, in the securities referred to herein, and/or other related securities, and may increase or decrease such position or take a contra position. Additional information is available upon written request. This publication is for clients of Virtue of Selfish Investing. Reproduction without written permission is strictly prohibited and will be prosecuted to the full extent of the law. ©2023 MoKa Investors, LLC DBA Virtue of Selfish Investing. All rights reserved.
FOR OUR FREE MARKET LAB REPORT :