The debt crises of 1933 and 2008 both led to certain interest rates hitting 0% and were followed by big money printing by the Federal Reserve. Both crises induced material changes in the long term debt cycle. In the case of 1933, World War II brought on a new world order as the U.S. dollar became the world's reserve currency as a consequence of the spoils of war. It remains to be seen if and when a new world order is established. The U.S. can continue at its pace for a while longer, especially when helped by exponentially growing technologies such as blockchain and AI that never existed in full form until recent times. Such are great wealth creators. Note, it was not until March 2020 that the Fed lowered both the discount and federal funds rate to 0% for a prolonged period of time, a first in history. 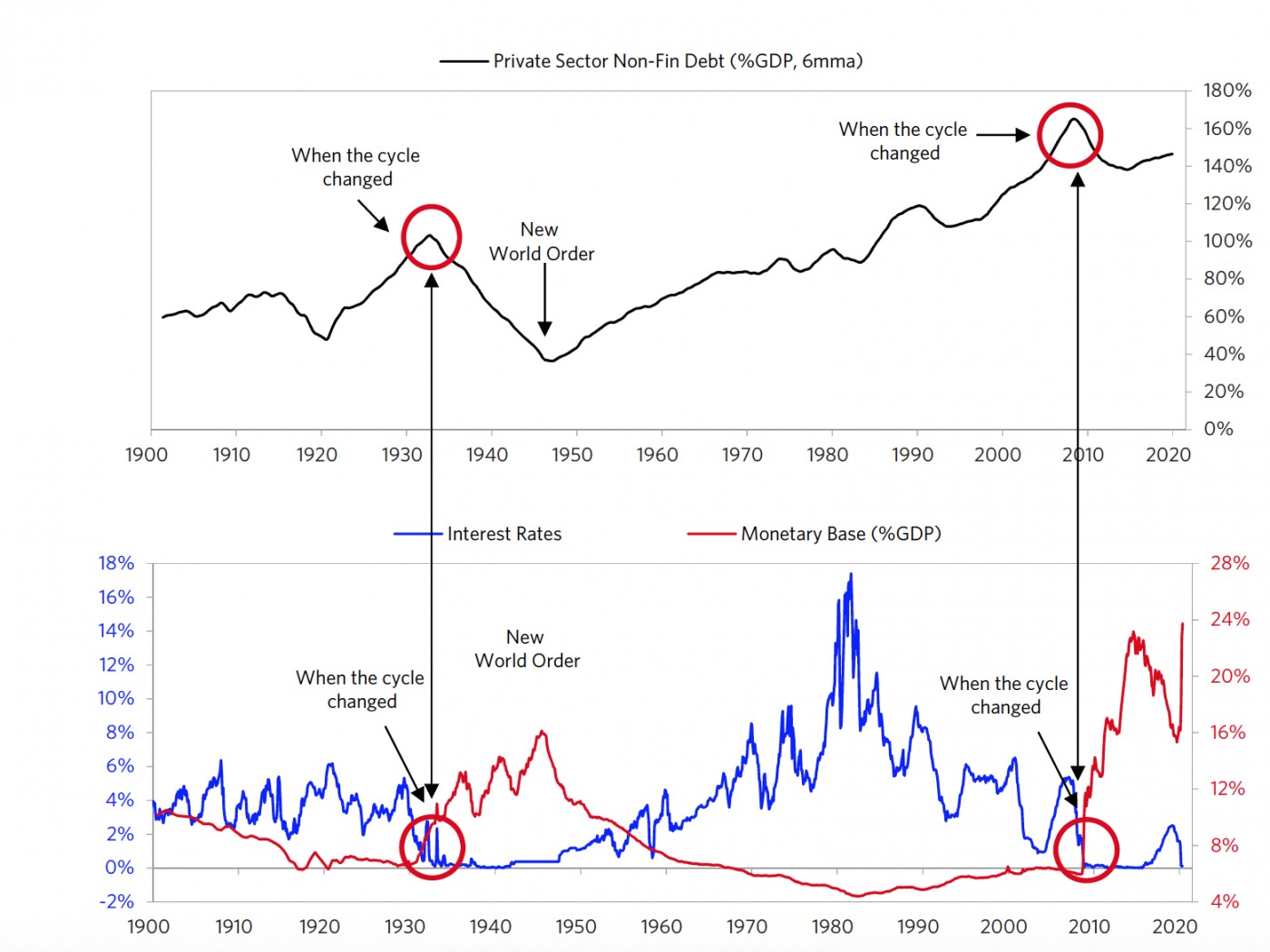 1) Interest-rate-driven monetary policy as the interest rate fuel tank was near full after Volcker spiked rates in the early 1980s. Since then, the tank has slowly been drained and now sits largely depleted.

2) Printing money and buying financial assets known as “quantitative easing” has caused levels of populism, or the gap between the haves and have-nots, not seen since the Great Depression of the 1930s. The older generations tend to, on balance, have more exposure to assets such as stocks, bonds, real estate, and gold thus benefit from QE which drives down bond yields providing companies with cheap funding that is used to buy back their own stocks, thus stock buybacks remain at all-time highs. The benefits do not trickle down proportionately, so the younger generations suffer, not to mention how the cost of a university education has well outpaced inflation over the last 20 years. The $1.4 trillion in unforgivable student loans is another nail in the coffin.

3) Coordination between fiscal policy and monetary policy in which the central government does a lot of debt-financed spending and the central bank buys that debt which is the last approach used when the first two cease to be effective. Central banks lose their ability to create credit growth. This is where we are now as M1 supply skyrockets while M2 velocity plummets. People are frozen by fear so only spend for the bare necessities. The large wealth gaps together with COVID as the politicized accelerant have led to varying degrees of social unrest around the planet.

The coronavirus pandemic which economically locked down the majority of the planet caused incomes, economic activity, and employment to plummet. Central banks had no choice but to accelerate their printing presses. Current debt levels exceed prior historical highs. 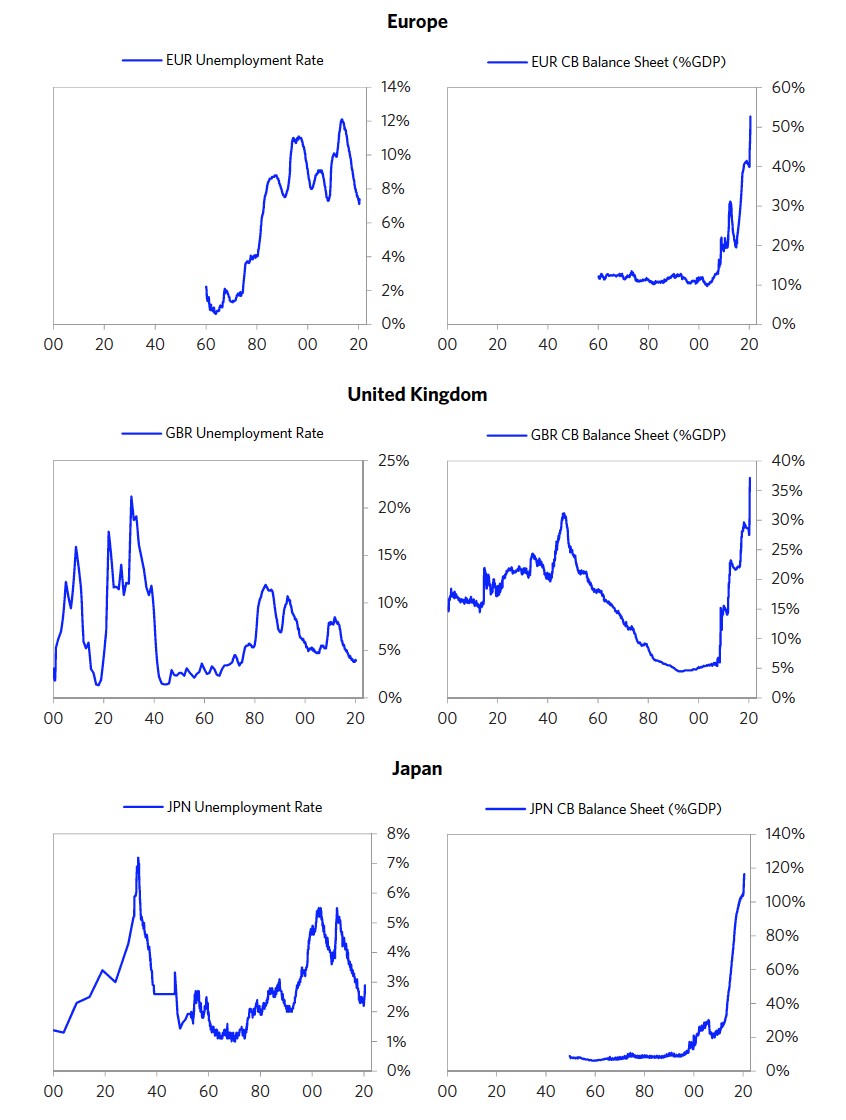 
This move to print has been observed numerous times in history and represented a material systemic change each time:

Creating fiat has been standard operating procedure by central banks that will persist until that approach no longer works.

Naturally, when central banks print excessively, the value of fiat is driven lower which pushes up the value of hard assets, stocks, bonds, gold, and the new contender, bitcoin. In fact, bitcoin's value that has soared by many orders of magnitude since its creation in 2009 is testament to its success as a borderless facilitator of value as well as being a store of value which cannot be inflated away. Chinese investors have moved some $50 billion to overseas addresses over the last year using bitcoin's tether which does not require KYC. Also, the fact that younger generations trust bitcoin more than gold as an investment may spur the great transfer of more than $30 trillion in generational wealth that may take place in the coming years as fiat continues to debase while bitcoin and other digital assets continue to appreciate. Bitcoin at $1 million will make millionaires of many. Based on its price history, this is achievable within the next few years.

In this Era of QE, not investing your savings is an even greater risk because it means you are in fiat which is on a slippery slope lower. Global fiat debasement continues to accelerate. At the Jackson Hole, Wyoming annual conference, the Fed redefined how they view inflation. Target inflation will now be allowed to run higher. If inflation moves under 2%, it will be pushed to higher than 2% through QE because the Fed is now targeting an average of 2%. They said they will allow inflation to rise "moderately" above 2% without defining more precisely what they mean by "moderately". Deflation will not be tolerated by the Fed so will be met with bouts of money printing. Yet as long as M2 velocity continues to plummet, deflation is around the corner. Falling M2 may further spur the Fed to print even more money. Adding to the deflationary spiral is technology which is inherently deflationary. Over time, you get more power and efficiency for less money.

Eventually, once we get a dead cat bounce in terms of consumer confidence, spending will increase which may spike inflation. Given the trillions of dollars in circulation, the central bank may be rendered helpless to subdue a sharp rise in inflation if history is any guide. This will ultimately be very bullish for hard assets, gold, and bitcoin. Keep in mind that bitcoin is tiny by comparison to the rest so has far greater room to move higher. As a consequence, nothing has or will compare to the risk adjusted returns for bitcoin. The fact that Microstrategy has invested $425 million into bitcoin is just the start of what many other companies may do to avoid having exposure to fiat while enjoying the potential gains inherent in bitcoin as dictated by its price history since its creation in 2009.

Also keep in mind the way inflation is measured today is different from the way it was measured in the 1980s which would clock inflation at 10% currently. Fed Chair Powell is pulling an anti-Volcker move. Volcker faught inflation by hiking interest rates to new highs. When there is too much debt, you need to reset it. Volcker was sharply criticized by the administration back then but as he saw to it to remain apolitical, he did what he knew was right. Today, no one wants to take the medicine of austerity. Under Powell, the Fed is political especially when compared to the days of Volcker. Even though the central bank should not be politicized, the sitting President seems to have influence over Powell's decisions. Nevertheless, regardless of whatever is happening behind closed doors, the QE fiesta is likely to continue.

As a sidebar, the way humanity progresses is that good businesses are rewarded while bad ideas and endeavors fail. Just because a company has many employees does not mean they should get life support. Zombie banks and businesses should never be rescued as it creates moral hazard. "Too big to fail" is a nice piece of propaganda put forth by governments to justify the democratization of losses. Taxpayers are always held accountable.

By contrast, free markets work by fading out those companies that fail to offer sufficient value and utility while rewarding those companies that create superior value and utility. This typically takes the form of invention whether it be a better service or product. When laws or moves by central banks interfere with capital allocation, such interferes with human progress. A bunch of guys sitting in central banks around the planet cannot outdo the natural dynamics of millions and ultimately billions of people by controlling the money supply.

The U.S. debt clock is an interesting graphic. It shows underfunded liabilities currently stand at a whopping $154 trillion. This number is made up of social security, pensions, etc that the government has promised the people. Yet there is no money to pay this massive sum. As Dalio of Bridgewater has pointed out, this is a serious tipping point.

As debt continues to mount, Fed Chair Powell yesterday implied they've printed a lot already so did not give the market what it wanted to hear but instead highlighted the rebounding economy. It was the Fed's standard way of standing pat so the lack of specifics disappointed the market, but of course they will have to print more and a lot more as they have no choice. Trump meanwhile is bullying the Fed and Congress to pass the stimulus bill as he calls them heartless as some Americans continue to struggle. But a falling stock market reduces the odds Trump will be reelected, and the Dems know this. In consequence, the second round of stimulus checks is being delayed. In the meantime, the market is reacting bearishly, pushing stocks and indices lower so expect potentially more weakness until the Fed once again gives the green light on increased QE.
Like what you read?
Let us help you make sense of these markets by signing up for our free Market Lab Reports:
This information is provided by MoKa Investors, LLC DBA Virtue of Selfish Investing (VoSI) is issued solely for informational purposes and does not constitute an offer to sell or a solicitation of an offer to buy securities. Information contained herein is based on sources which we believe to be reliable but is not guaranteed by us as being accurate and does not purport to be a complete statement or summary of available data. VoSI reports are intended to alert VoSI members to technical developments in certain securities that may or may not be actionable, only, and are not intended as recommendations. Past performance is not a guarantee, nor is it necessarily indicative, of future results. Opinions expressed herein are statements of our judgment as of the publication date and are subject to change without notice. Entities including but not limited to VoSI, its members, officers, directors, employees, customers, agents, and affiliates may have a position, long or short, in the securities referred to herein, and/or other related securities, and may increase or decrease such position or take a contra position. Additional information is available upon written request. This publication is for clients of Virtue of Selfish Investing. Reproduction without written permission is strictly prohibited and will be prosecuted to the full extent of the law. ©2022 MoKa Investors, LLC DBA Virtue of Selfish Investing. All rights reserved.
FOR OUR FREE MARKET LAB REPORT :