One of the biggest big-stock names in the mid-2010’s, including the current market environment, has been Tesla (TSLA). The company, with its illustrious, visionary, and Twitter-wielding CEO Elon Musk has pushed the envelope of electric-car development, and this has in turn caught the imagination of investors who have either loved or hated the company.

TSLA originally IPO’d in June of 2010 and had several fits and starts that went nowhere for a full 33 months before the stock finally broke out to the upside and began its now meteoric ascent. VirtueofSelfishInvesting.com first alerted members to the buyable gap-up move in May of 2013, which correctly identified the start of a rapid price move higher from that point.

At that time the general market was also starting to emerge from a prior six-month consolidation phase, so the stock had the general market’s wind at its back, so to speak. Following the initial buyable gap-up, TSLA made a rapid move up through the $100 price level in late May 2013.

The net move from the $100 price level was 14.9%, but the best one could have done based on where the stock traded was 14.6%, with something closer to 10-13% a more realistic outcome for a real-time trader. 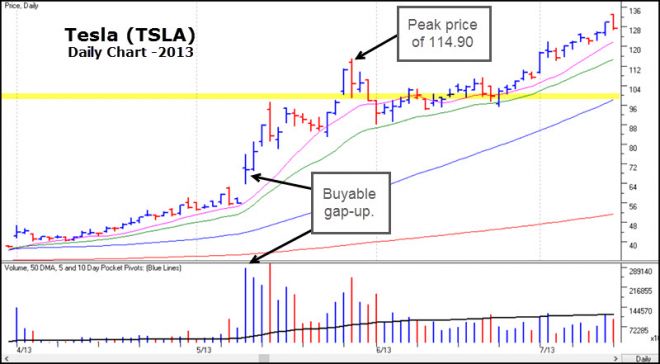 Eventually TSLA cleared the $200 Century Mark price level on February 11, 2014. It spent several days moving back and forth, above and below the 200 price level before finally gapping higher on February 20th. The stock then rallied to a high of 265, thanks to a positive earnings report from TSLA on February 24th.

In this case, the Century Mark Rule worked again. However, from a practical standpoint anyone taking a position near the $200 price level might have been stopped out or may have simply chosen not to gamble on earnings. Thus, this application of Jesse Livermore’s Century Mark Rule gets partial credit for success. 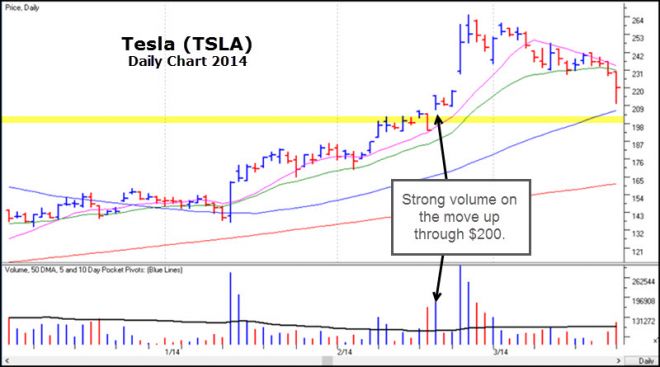 Currently, in April of 2017, TSLA is attempting to push up through the $300 Century Mark. So far it has made two unsuccessful attempts at decisively clearing the 300 price level. At the time of this writing it is making a third attempt following a continuation pocket pivot posted on Thursday, April 13th. 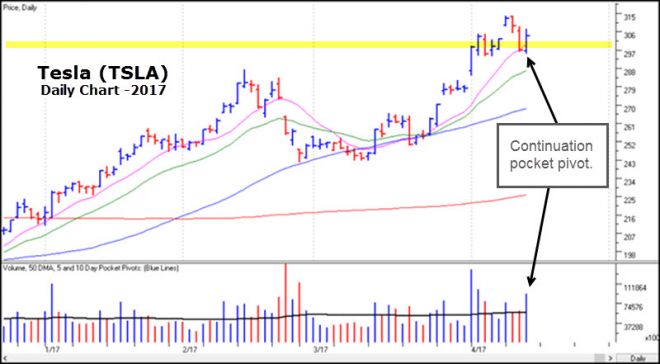 It remains to be seen whether TSLA will move substantially higher from here. However, with earnings coming up in about 2-3 weeks, there is always the potential for an earnings-driven gap-up move. For those who read this well after the date of this publication, it is still instructive to see how TSLA played out.

Next, in Part 4, we look at Nvidia (NVDA) as another example of Jesse Livermore’s Century Mark Rule in action.