Our examination of Jesse Livermore’s “Century Mark” Rule, of which this is the fourth installment, will now look at two big leading stocks from 2016, Nvidia (NVDA) and Acacia Communications (ACIA).

To quickly review, recall that Jesse Livermore reveals his rule in the investment classic, Reminiscences of a Stock Operator, within the context of his operations in Anaconda Copper shares during early February 1907: "It was an old trading theory of mine that when a stock crossed $100, $200 or $300 for the first time the price does not stop there but goes a good deal higher, so that if you buy it as soon as it crosses the line it is almost certain to show you a profit."

He further defined his expectations for this rule with respect to Anaconda Copper as follows: "I figured that when it crossed $300, it ought to keep going and probably touch $340 in a jiffy." That implied a rapid movement of over 13% higher from the $300 price level, which we can call the "point of impact." From this we can surmise that based on his rule, a move of 10-15% or more was expected to occur “in a jiffy.”

Nvidia (NVDA) had all the big-stock characteristics of a leading stock during 2016 with its focus on two hot areas of the economy: video games and self-driving (autonomous) vehicle technology. This led to a tremendous price move after we alerted our website members to it at $33 a share back in April of 2016.

By the end of the year NVDA’s price move was in full-swing when it pushed up through the $100 price level for the first time in its history. That immediately led to a 20% move in just six days once the stock cleared the first Century Mark. This neatly fits Livermore’s expectations for his rule, even exceeding the 13% move he expected in Anaconda Copper back in 1907. 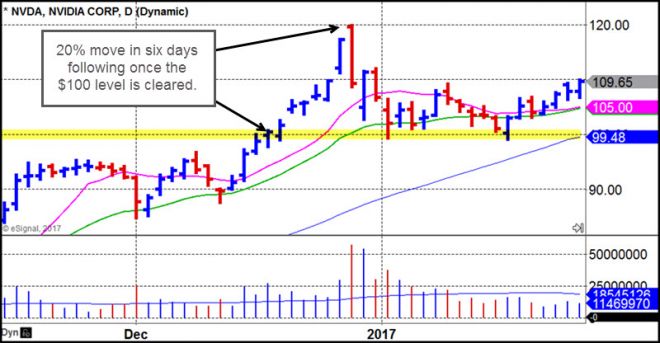 Acacia Communications (ACIA) was a hot IPO in 2016 following its trading debut on May 13th. By August the stock was on fire, gapping higher after reporting earnings in the middle of the month. The day after this massive-volume gap move, ACIA cleared the $100 Century Mark for the first time. 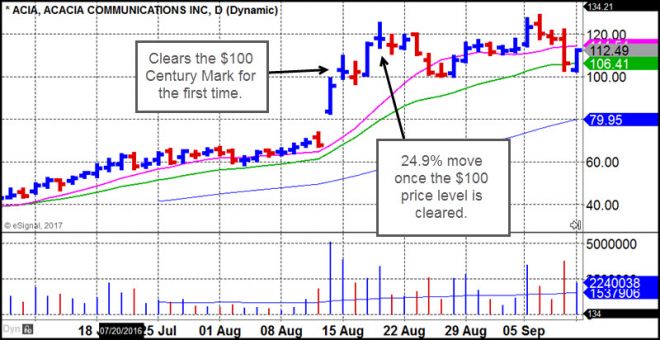 ACIA hovered around the $100 level for another couple of days before launching 20% higher in just two days. This easily met Livermore's expectations for the rule. Notice, however, that the stock fluttered about the 100 price level, dipping just below the Century Mark the day after it had first cleared it.

This may argue for allowing for 1-3% of downside “porosity” below the Century Mark before determining that the move has failed. This phenomenon was also evident in the example of Tesla (TSLA), discussed in part 3 of this article series.

Thus, we might implement Livermore’s rule with the idea of buying as close to the Century Mark in question for any stock, and then allowing for a downside stop that is 1-3% below that Century Mark. We would also make the strong point that when dealing with these Century Mark Rule purchases, one should remain flexible and open to the idea of re-entering the trade if the requisite condition re-materializes.

To illustrate, consider the example of purchasing a stock as soon as it breaks above a Century Mark but getting quickly stopped out by a move in excess of 3% below the Century Mark. If the stock then stabilizes and makes another move back above the Century Mark, one should be willing to re-enter the trade under the same risk-management conditions.