All-time records for debt and rates

With interest rates at all-time lows and debt at near all-time highs, any increase in rates beyond 25 bps would hamper GDP as payments on debt would materially increase. The world currently stands at 4:1 debt-to-GDP. The U.S. fed cannot therefore hike rates more than a couple times or risk tanking markets. With new crises on the way with the most recent one being that of the C19 mutation, expect more QE. 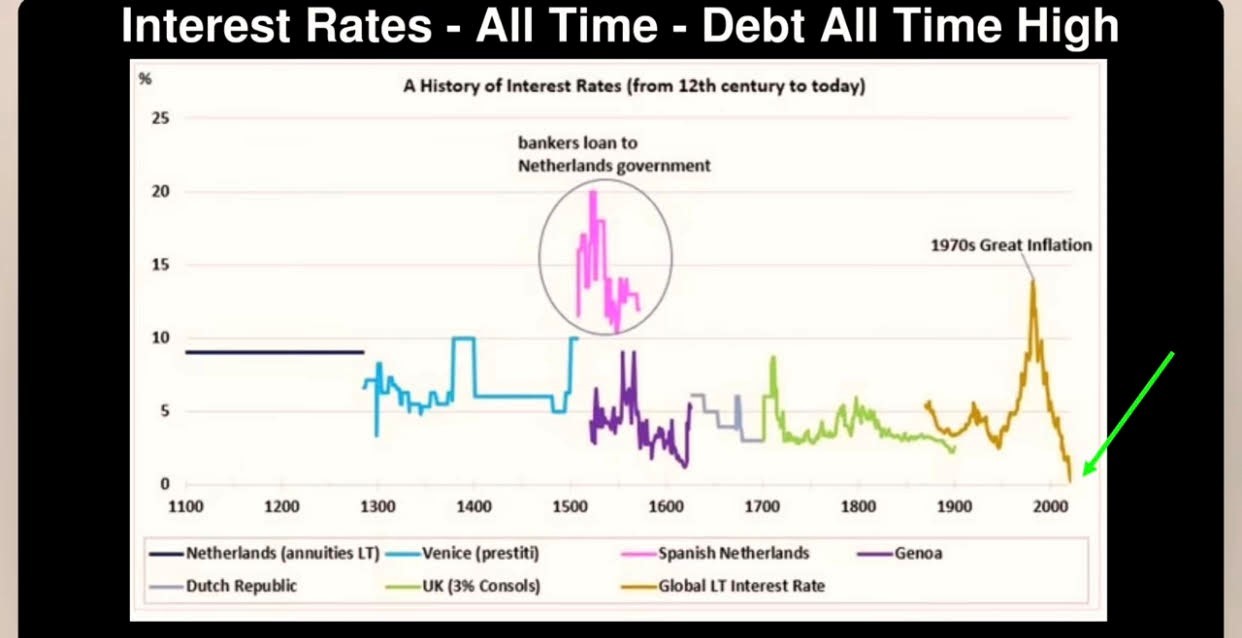 We need bitcoin as the standard yesterday. I have been calling for such as early as 2013 given its promising potential. 1.1 billion people live with double digital inflation not to mention issues in the U.S., UK, and EU which, all told, is destroying billions of lives and livelihoods. These government statistics probably underestimate the real inflation much as the U.S. still claims inflation is just a few percent when it's actually 15% or more. 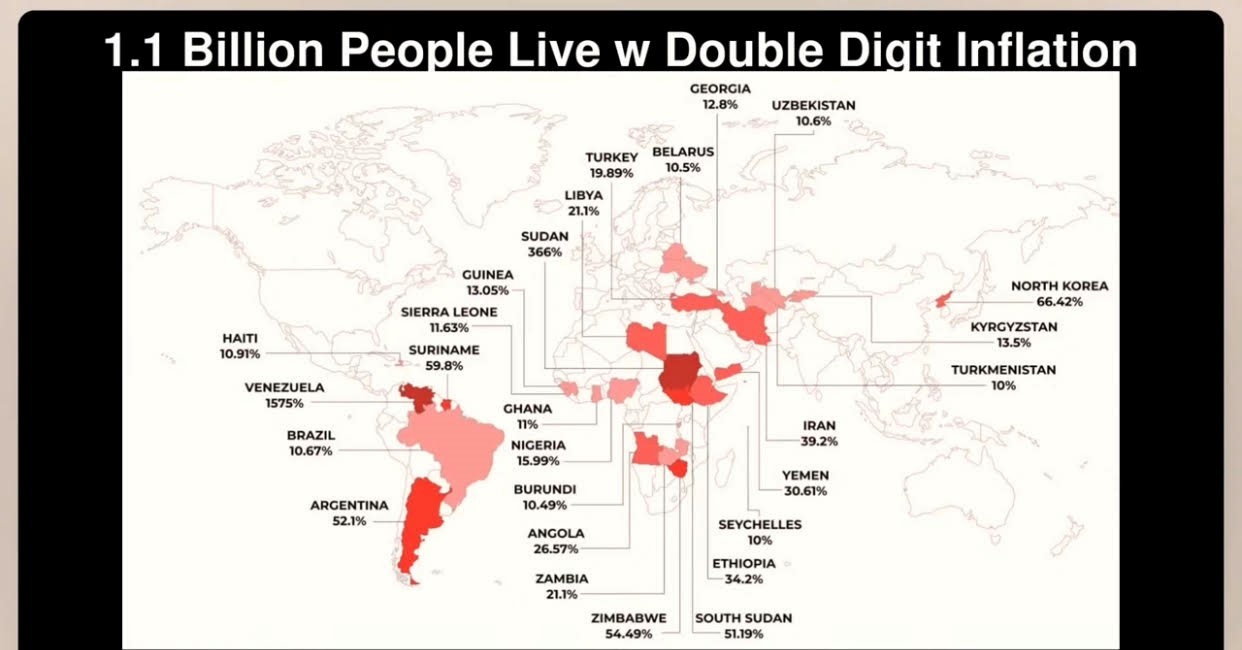 A Historical Example of QE

A close historical example to today's situation regarding debt, inflation, and interest rates was fiat currency inflation in France starting in 1792 which rapidly rose to 18%/yr. This is the rate at which the U.S. was prior to C19. In 1794, France had a money supply crisis so had to double it to 35%. Then in 1795, they quadrupled it to 145%/yr. From 2001-2020 the U.S. expanded its money supply by 250% in total. We are at a rate of 40% money expansion in 2020 due to C19. It was 7%/yr prior to C19. Interestingly, 40% of all dollars in circulation have been created in the last year.
Dollarization and Bitcoinization of Weaker Fiat
The more credit money you put into the system, the more future demand you create for the dollar being the world's reserve currency. Fiat currency induces indebtedness, and indebtedness requires more money to satisfy the debt, so a debt spiral is created when fiat currency inflation hits a certain rate. We will have to at least double the amount of M2 when the next crisis hits, then as things go from bad to worse due to onerous levels of debt, a quadrupling may occur lifting M2 to 145%/yr which rhymes with what happened in France in the late 18th century. So by 2031, U.S. M2 will have been expanded to beyond $500 T. Many weaker fiat will collapse into dollars or bitcoin. If this comes to pass, by 2031, global M2 will be $1250 T which is 12x what it is today. So if Bitcoin is 20% of global purchasing power by then, Bitcoin's market cap in 2031 will be $250 T in nominal dollars. If we adjust to 2021 dollars, that is only $20 T. This implies a Bitcoin price in nominal dollars in 2031 of $12.5 M/BTC but in terms of 2021 purchasing power, it is only $1 M which still outruns any other asset class. So to stay ahead of hyperinflation, buy Bitcoin.

The M2 money supply is currently expanding at the rate of 35% in the U.S with an acceleration rate of 10%. Double this figure for global M2. M2 does not happen smoothly as it accelerates rapidly in a crisis situation such as C19. Historically it has risen 7% over last 20 years. There is no way to go from the 40% M2 expansion in 2020 down to the projected 12%. M2 typically never returns to prior levels once the world reaches this level of debt. By 2024, it can be expected that the 35%/yr figure accelerates by 1.1%/yr up through 2031. By 2031, a loaf of bread will have risen from $2.50 today to $40.00. As one of many examples, apples doubled in price over the last year and Thanksgiving turkeys doubled in price over the last 2 years.

This has dire consequences on purchasing power. The rate of debasement currently stands at 21%/yr, so one's buying power will have severely reduced by 2031. This makes sense given the fast rising prices of basic goods such as food, health care, and education. Every time a boat is stuck in a port, supply chains break down and prices rise. Long Beach has a queue of ships stuck in port due to onerous C19 regulations, waiting to deliver their goods. In consequence, the $300-500k annuities owned by the fortunate portion of the middle class are not enough to survive on based on the rate of inflation.
Government Takes; Free Markets Create

With Bitcoin, we will have far more wealth creation because of uninhibited free exchange. Government does not create wealth. Govts are in the business of taking. Markets are in the business of making. Markets create a positive sum gain. We create more wealth through trade rather than acting in isolation. Bitcoin is a technology that is highly resistant to coercion. As a consequence, global GDP should grow over the next decade at least 10-fold from $100 T to $1 Q (quadrillion) in today's dollars. In future dollars, tens of quadrillions.

The first order of game theory for the state in principle is to demonize bitcoin, illegalize it, and propagate misinformation to cloud people's judgement of bitcoin. The second order for the state is to expand the money supply and acquire bitcoin on the quiet to avoid triggering game theory from other nations.
Markets

Markets have been volatile as the double whammy from Powell suggesting speeding up the time to taper together with the C19 mutation where biotech company Moderna stated existing vaccines will not handle it well. This is in contrast to prior viruses which mutated then became a non-issue. The pandemic wave is always the worst. Dozens of pandemics over the last several hundred years suggest as much. Indeed, the World Health Organization said such new strains should be less dangerous. As for Powell, he merely said he would suggest a faster time to taper if the data in December agrees with this. Inevitably, inflation is an issue but so is C19 which has crippled economies. Has anyone seen the state of major cities such as San Francisco where many businesses are boarded up either because of skyrocketing crime or because they went out of business. It seems doubtful with debt at current levels that the Fed will be able to do any meaningful tapering or suffer steep market corrections.
Like what you read?
Let us help you make sense of these markets by signing up for our free Market Lab Reports:
This information is provided by MoKa Investors, LLC DBA Virtue of Selfish Investing (VoSI) is issued solely for informational purposes and does not constitute an offer to sell or a solicitation of an offer to buy securities. Information contained herein is based on sources which we believe to be reliable but is not guaranteed by us as being accurate and does not purport to be a complete statement or summary of available data. VoSI reports are intended to alert VoSI members to technical developments in certain securities that may or may not be actionable, only, and are not intended as recommendations. Past performance is not a guarantee, nor is it necessarily indicative, of future results. Opinions expressed herein are statements of our judgment as of the publication date and are subject to change without notice. Entities including but not limited to VoSI, its members, officers, directors, employees, customers, agents, and affiliates may have a position, long or short, in the securities referred to herein, and/or other related securities, and may increase or decrease such position or take a contra position. Additional information is available upon written request. This publication is for clients of Virtue of Selfish Investing. Reproduction without written permission is strictly prohibited and will be prosecuted to the full extent of the law. ©2022 MoKa Investors, LLC DBA Virtue of Selfish Investing. All rights reserved.
FOR OUR FREE MARKET LAB REPORT :