The Metaversal Evolution Will Not Be Centralized™
Fiat Failures

Currency failures are coming faster and faster due to the speed of technological evolution. Debt worsens and fiat debases until it has to reset as history has shown over many cycles. All currencies break down at some point because the human psyche says we want to believe we can get something for nothing. We vote for the politician who makes empty promises, then the lie gets hidden by way of inflation. Inflation allows governments to spend more than they can. The lie then gets bigger and bigger helped by inflation which propagates this illusion while fractional banking allows governments to spend more than they can. This spending is then accelerated through the long-term debt cycle.

Indeed as debt increases, the amount created accelerates, thus purchasing power drops. M2 has jumped 40% due to C19. More money has been printed in the last year than in all the prior years combined. This system cannot continue as it is increasingly unstable. If you dont allow the natural force of technology through a currency that allows for deflation to move broadly to society, you must concentrate it in a few hands. If you pull on that thread, you see you cant continue to print forever. The end point is accelerating inflation with modern day slavery as the middle class gets wiped out and wealth ends up in the hands of the few. We are seeing this with the Jeff Bezos's and Elon Musk's of the world where wealth is tied to technology. As this number shrinks, it becomes a plutocracy. Eventually, the existential risk kicks in where the masses revolt, dictators rise, and war breaks out, spurring on a new world order as the big reset button is hit.

We are seeing a preview of the dystopian rule playing out in China where they disguise surveillance as digital money. They use social and credit scores to adjust one's rate of interest. Bitcoin is the disruptor. If everyone bought bitcoin who is against C19 lockdowns, the weaponization of global warming, and other government control mechanisms, they would in time have their individual rights restored because such an action defunds governments which gives governments less power to print money. By contrast, QE takes power from the masses. By favoring the printing of more money to promote their respective government to protect them from the overarching, evil governments, they are effectively giving more power to *all* governments.

Bitcoin and hard assets are escape valves from currency locks or depreciating fiat. The individual is empowered through crypto by replacing the fraudulent, fractional banking system with bitcoin. As more people become part of the crypto-economy via bitcoin, ethereum, and alt coins, it drains power from governments. But nothing changes until the distortions and corruptions of nation-states and money reach extremes.

Higher inflation is partly due to the climate change movement. Climate change regulations including ESG demand money printing because it is deeply economically disadvantageous. Wealth and productivity shrink. On a finite planet, you cannot grow forever by printing money or the credit-based system collapses. QE does not create wealth. It just degrades fiat, thus erodes savings accounts robbing people of their spending power, thus materially impacts the middle class. If you dont make stuff, there is no stuff. It's really that simple. There is no economic tooth fairy or a Santa handing out free presents.

The counterbalance to the current inflationary system is the cutting edge technologies which are deflationary as you can do more with less. It is exponential tech which boosts GDP compared to debt-generated QE which spurs inflation, thus debases fiat.

Bitcoin will reach its tipping point of mass adoption as more minds see it as the solution to deeply problematic issues. Innovation brings more people which spurs the network effect. Technologies being built on Bitcoin to boost its scalability such as Liquid, Lightning, and Taproot are evolving at a fast and furious pace. Nevertheless, bitcoin and cryptocurrencies are no strangers to corrections that exceed -90% during bear markets. Even during bull markets, bitcoin and cryptocurrencies can correct substantially, with -50% to -75% corrections off peak not uncommon. Inevitably, most crypto dies on the vine over each cycle. The 2014 and 2018 bears left few survivors. Back then, there was little utility. Only the leading ones with growing utility survived. In the dot-com days, only a handful of stocks such as the Amazons and Ebays survived then thrived. Expect even more so with crypto as there are now over 14,000 cryptocurrencies that trade in open markets. Perhaps we end up with 100 names in the end spread across technologies with proven utility by increasing efficiencies while reducing costs by at least an order of magnitude such as layer 1s (BTC, ETH, SOL, ATOM), gaming/NFTs (SAND, MANA, ENJ, AXS),  DEXs (UNI, SUSHI), Web3 (DOT, THETA, HNT), and DeFi (LUNA, LINK, AVAX).

Ultimately, fractional banking involving central banks is a legalized Ponzi system that can only be solved by Bitcoin. If we dont solve it, then dictatorships will arise but then eventually crumble by way of mass revolution as has always been the end result if the last millenium of human history is any guide.

The U.S. dollar would have probably failed in 1971 had they not tied it to oil which is energy. If your government were outside that oil-for-U.S. dollar system, your country would be cut off from major trade. The petrodollar extended U.S. dollar dominance. Today, China is a big player, so it is trying to price commodities in yuan through its Belt and Road Initiative. Bitcoin, on the other hand, provides a far more efficient transition from legacy banking systems of control to becoming the world's reserve currency that co-exists with the U.S. dollar and Chinese digital yuan.

The NASDAQ Composite has been trading in a choppy, sloppy manner since late November (the red bars are alert signals): 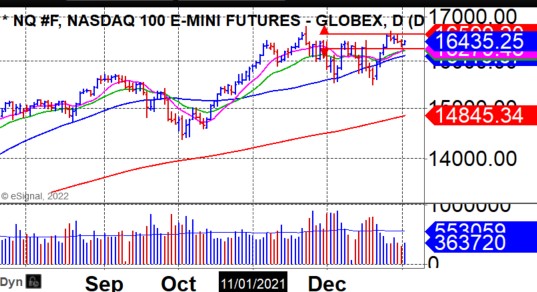 The number of cross currents have been material between C19, wages, unemployment, growth, and inflation. Powell left room for a reversal of his decision to double the pace of the taper or put off a rate hike though if economic conditions show sufficient strength, a hike could come as early as March 2022. After today's minutes, CME Fed Futures puts the odds of a hike in March at 64.1%. Meanwhile, some major central banks have started hiking rates including the 25 basis point hike by the Bank of England on Dec 16.

Notably, most all members of the U.S. Federal Reserve are now hawkish, a change of tune from their position a couple months ago when Powell said inflation was transitory but then removed the word as he realized inflation was persistent and higher than expected. But a substantial amount of QE, while being tapered, along with the raising of the debt ceiling is still a tailwind to the stock market. At a $30 billion/mo reduction in QE, tapering should be complete by March. If the major averages don't stage a taper tantrum by then forcing Powell's hand once again, expect headwinds as it opens the opportunity for Powell to start hiking rates.

Debt is too large at this stage for any meaningful rate increases to occur before the major averages undergo material corrections, ie, beyond -20%. This means that once the debt:GDP ratio exceeds 77% historically speaking, the world passes the point of no return in terms of bringing economies back to normal. Thus the Fed may wish to try to bring interest rates back to pre-QE levels of 2008 when QE began, but this is a pipe dream. Such a meaningful hike in rates would decimate markets. Powell cannot do what Volcker did because today is massively different than when Volcker was the Fed chair. Note that Volcker's hawkish stance which sent interest rates to their highest levels did NOT crash the stock market. Times change. Debt in the U.S. alone is even greater than during WW II. Interest rates are at 5000 year lows.

The fractional banking system is designed to be inflationary. It rewards the printing of money which drives populism since those with money typically have it invested in stocks, bonds, real estate, and hard assets. As fiat debases, the value of their assets rise. By contrast, those with little savings see their living costs rise while not being able to invest in assets. Under such a system, the rich get richer. Always. Those with money have more influence over those who do not. While the Federal Reserve is supposed to be independent in principle, it is not so in practice. No central banker wants to go down in history as the one who caused a mega crash. It is easier hide behind the false virtual armor of quantitative easing and helicopter money even though these are the reasons why fiat currencies eventually fail. The system is self-perpetuating.

That said, over the last decade, whenever the major averages correct roughly -20%, the Fed chair has stepped in and reversed the tightening of their balance sheet, giving markets what they want- more QE. Why would this time be any different than hundreds of years of historic cycles? The answer: Exponentially growing technologies as I've written in prior reports. This could give the Fed more room to hike without causing the mother of all crashes. But this is a big MAYBE as the timing is uncertain. Each day brings new data so a good investor or trader position sizes their exposure accordingly. We remain vigilant as always.
Like what you read?
Let us help you make sense of these markets by signing up for our free Market Lab Reports:
This information is provided by MoKa Investors, LLC DBA Virtue of Selfish Investing (VoSI) is issued solely for informational purposes and does not constitute an offer to sell or a solicitation of an offer to buy securities. Information contained herein is based on sources which we believe to be reliable but is not guaranteed by us as being accurate and does not purport to be a complete statement or summary of available data. VoSI reports are intended to alert VoSI members to technical developments in certain securities that may or may not be actionable, only, and are not intended as recommendations. Past performance is not a guarantee, nor is it necessarily indicative, of future results. Opinions expressed herein are statements of our judgment as of the publication date and are subject to change without notice. Entities including but not limited to VoSI, its members, officers, directors, employees, customers, agents, and affiliates may have a position, long or short, in the securities referred to herein, and/or other related securities, and may increase or decrease such position or take a contra position. Additional information is available upon written request. This publication is for clients of Virtue of Selfish Investing. Reproduction without written permission is strictly prohibited and will be prosecuted to the full extent of the law. ©2022 MoKa Investors, LLC DBA Virtue of Selfish Investing. All rights reserved.
FOR OUR FREE MARKET LAB REPORT :