The NASDAQ Composite posted a new all-time closing high on Thursday and finished out the week holding up near its highs on lighter volume. Its near-term outperformance has been a function of strong upside action in a large number of big-stock NASDAQ 100 names. The S&P 500 Index remains below its 50-day moving average, but has still barely corrected 2% off of its peak of seven weeks ago. For the most part, the indexes simply remain within seven-week consolidations, which keeps the potential for a breakout to new highs in play.

We have often referred to the current market environment as being an "Ugly Duckling" market where stocks that look weak can often find their feet again and turn back to the upside. It is with some chagrin that we have seen two names that were removed from the Focus List over recent weeks, MKS Instruments (MKSI) and Sina Corp. (SINA), rally back above their 50-day moving averages after previously violating their 50-dmas.

In both cases, the 50-day moving average violation was a fakeout, and the stocks then turned back up through their respective 50-dmas. Netease (NTES), which was removed from the Focus List, has continued lower following its 50-dma violation on April 11th. So we have two out of three 50-dma violations turn into fakeouts. The simple way to determine when a 50-dma violation is a fake out is by watching for a move back above the 50-dma as a concrete indication.

In our live weekly webinars, Gil Morales has discussed the "Moving Average Undercut & Rally" set-up (MA-U&R), which is a corollary to the general Undercut & Rally set-up. In this case the stock undercuts a moving average, but this only fakes out the crowd and the stock then turns back to the upside. Psychologically, this is also why a basic Undercut & Rally move from a prior low in a chart pattern works - it is viewed as a "breach of support" by the crowd, which can be bullish from a contrarian viewpoint.

The Market Direction Model (MDM) remains on a sell signal. The VIX Volatility Model (VVM) is currently on a buy signal that is consistent with the current MDM sell signal. Both could be on the verge of a change of signal, depending on what the general market does from here.

Focus List Stocks Expected to Report Earnings this Week: Amazon.com (AMZN) and Coherent (COHR) (both Thursday After-hours). Both stocks act well as they head into earnings. Owners of either stock should determine whether their current profit in either or both is sufficient to warrant holding the stocks through earnings. This is always a function of one's personal risk-tolerance, so should be considered carefully.

Baozun (BZUN) has been living below its 50-dma since dropping below the line on Monday of this past week. Technically, the stock hasn't violated the 50-dma, and so far the action might be considered constructive as the stock holds tight just below the line with volume drying up. Watch for a possible move back up through the 50-dma. 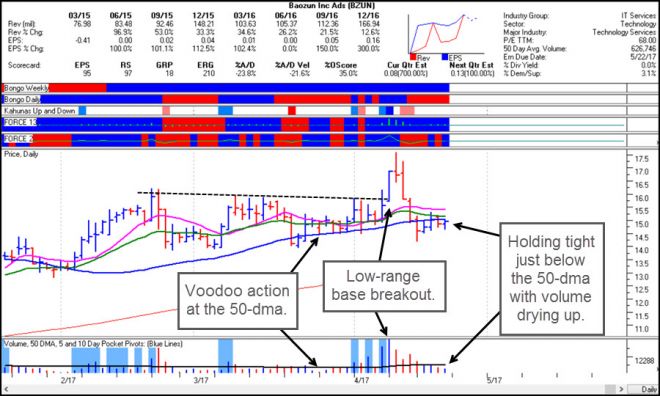 Netflix (NFLX) closed definitively under its 50-dma on Wednesday for the first time in several months on heavy selling volume following Tuesday's initial close a hair below the 50-dma following its Monday after-hours earnings report. Since the close was roughly at its 50-dma, this would not technically be considered a violation though it was behaving badly given its price/volume action after it reported earnings. That said, no further downside progress was forthcoming as the stock has turned back up towards its 50-dma on two consecutive days of above-average trading volume. If sellers have been washed out of the stock short-term, we would not be surprised to see the stock attempt to regain the 50-dma in a MA-U&R type of move. This would most likely coincide with further upside in the general market. 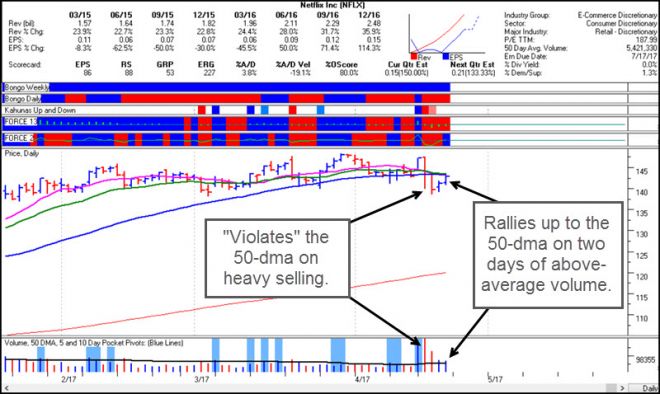 Snap (SNAP) is attempting to round out the lows of its first IPO base. On Tuesday the stock pulled off a successful undercut & rally move after undercutting and then moving back above the prior 20.03 low in the pattern. It ran into resistance along the 20-dema on Friday, but pulled into its 10-dma where it held support on an extreme voodoo volume signature. We would consider this buyable here using the 10-dma as a tight selling guide, or the 20.03 low as a wider selling guide. SNAP is expected to report earnings on May 10th. 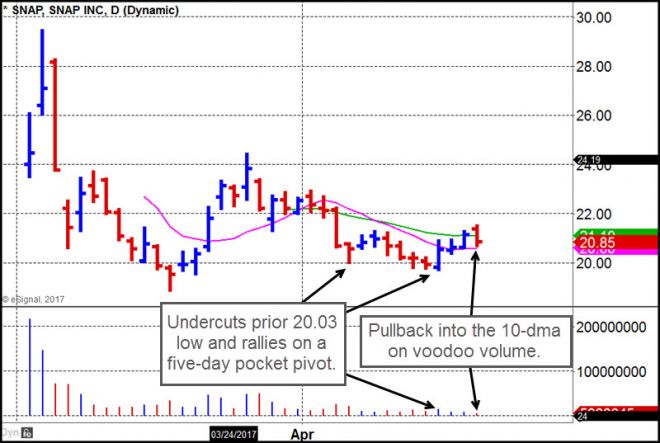 Tesla (TSLA) is holding tight along the $300 Century Mark and its 10-dma. This remains buyable here with the idea of seeing a pop in the stock ahead of earnings on May 3rd. Such a pop would be in the spirit of Jesse Livermore's Century Mark Rule.

Trade Desk (TTD) has been living below its 50-day moving average for the past six trading days. We would point out that we first discussed the stock as a buyable situation way back in January and February as the stock was base-building. It then broke out and had a massive 47% upside price run in less than 4 weeks. It has since corrected sharply and could be forming the lows of a potential new base. Friday's volume showed a sharp dry-up to -60% below average, and this is coming after an undercut & rally move back up through the April 4th low at 35.39. Thus this could be tested as a long here using 35.39 as a tight selling guide. 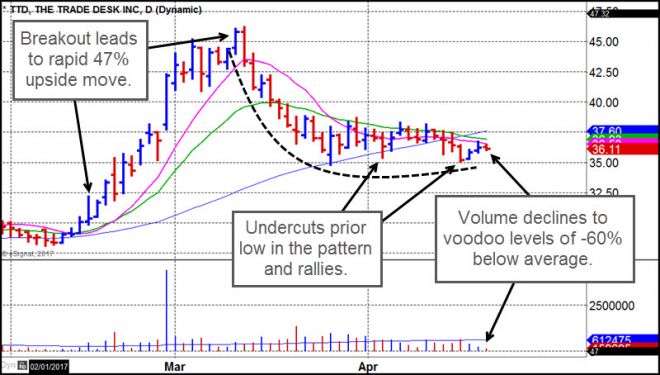 Veeva Systems (VEEV) posted a pocket pivot on Thursday and pulled in on Friday on slightly lighter volume. This brings it into a lower-risk entry position using the 10-dma or 20-dema as a tight selling guide. VEEV is not expected to report earnings until May 24th.