The market spent the week sloshing around on various news including the reaction to the Trump Administrations's recent immigration order, Wednesday's Fed policy announcement, rumors of delayed tax cut legislation, oil prices, and the monthly Bureau of Labor Statistics jobs report on Friday. By the end of the week the Dow regained the 20,000 price level, more or less in line with where it started the week. The same held true for the NASDAQ Composite and S&P 500 indexes. As the news flow stabilizes we may begin to see the market develop a more pronounced trend, and we would therefore focus on the best-acting stocks. Temporary bouts of market weakness help differentiate the stronger stocks from the weaker ones as they shake out the weakest hands.

Steel Dynamics (STLD) has violated its 50-day moving average. Myovant Sciences (MYOV) has also been removed for unsustainable performance give its tendency to have big price spikes followed by weakness that takes the stock back to the lows of its current chart formation.

Stocks on the list that are expected to announce earnings this week:

Amazon.com (AMZN) gapped down below its 20-dema after earnings but is holding above its 50-day moving average and the roundabout pocket pivot of January 5th. Note that the stock built a cup formation and never really put in enough time to build a handle. That made it vulnerable to a pullback, but a volume gap-down after a "lean" earnings report is a cautionary signal. We would like to see the stock regain its 20-dema in short order. Although some leading "FANG" stocks have taken a pause, they remain in a general uptrend overall. The big cap NASDAQ-100 continues to hit new highs, which should bode well for "FANG" stocks should its uptrend continue. 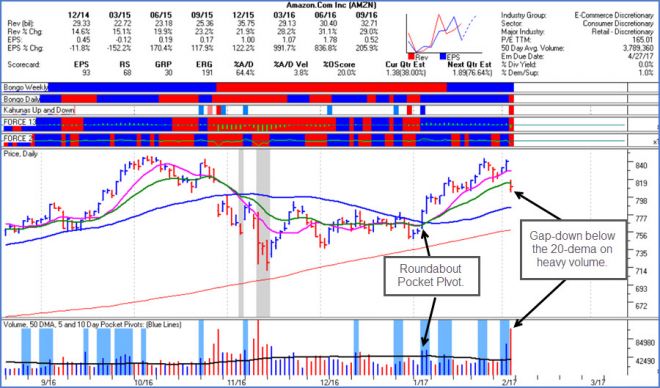 Argan (AGX) has found support at its 50-day moving average, which is the maximum selling guide for the stock based on the Seven-Week Rule. AGX has had a nice price move since we first reported on it on November 11, 2016.

Alibaba (BABA) is within a few thin dimes of its 99.94 buyable gap-up low, which also serves as a selling guide for the stock. Note that the 20-dema is just below the 99.94 price level, so a possible "gap-fill" could occur where the stock trades below 99.94 but finds support at or near the 20-dema. 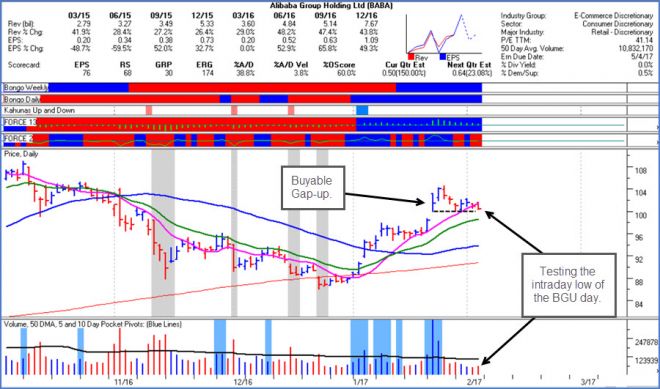 Barracuda Networks (CUDA) had a huge shakeout on Monday of this past week, but found support at its 40-week moving average on the weekly chart, below. This shows up as a higher-volume supporting week at the 40-week line, which is bullish. We note that other cyber-security names such as CHKP, SYMC, CYBR, PANW, and FTNT have been showing strength as of late, so if the group continues to improve then we would expect CUDA to do so as well. 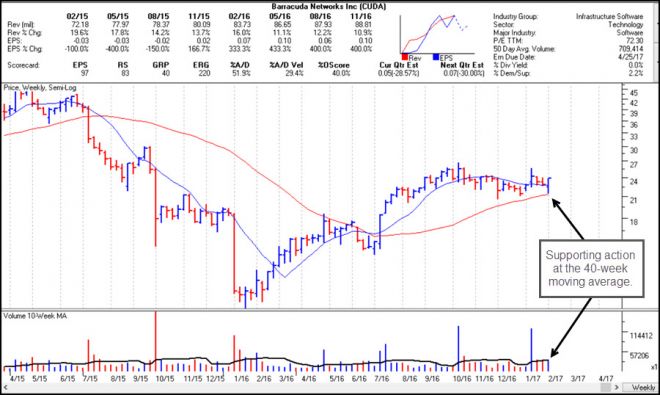 Freeport McMoran (FCX) and Mosaic (MOS), as commodity-related stock, tend to trade in wider price bands. This is something that is endemic to the character of these stocks, and buying on weakness is preferred to buying on strength. Thus MOS becomes buyable as it finds support along the 20-dema while FCX may be buyable on this current pullback as a result of news on Friday that affected all of the copper and metal ore stocks. We would, however, look for some signs of support at the 10-day line, such as a volume dry-up similar to what was seen in MOS on Thursday of this past week.

Facebook (FB) reversed on a breakout attempt Thursday after it initially rallied following its Wednesday after-hours earnings report. The stock closed Friday just a few cents below its 10-day moving average, so we cannot assume that it has failed outright just yet. Note that volume declined on Friday, so some initial selling may dry-up here, setting the stock up for another breakout attempt. FB, like AMZN, built a cup with a one-week handle before earnings, and so may not have spent enough time building a proper handle, which would then serve as a better foundation or "launch pad" for a sustained breakout. This is one to keep an eye on this week to see if and where it finds support within its current chart pattern.

Momo (MOMO) has been pulling into its 20-dema line after flashing a pocket pivot on January 23rd. It appears that the 20-dema is a consistent area of support such that pullbacks into the 20-dema would present your best lower-risk entry opportunities.

Netflix (NFLX) is holding extremely tight along its 10-day moving averages as its daily price ranges become very narrow and volume dries up (VDU) in the extreme. This would appear to be setting up for a breakout. 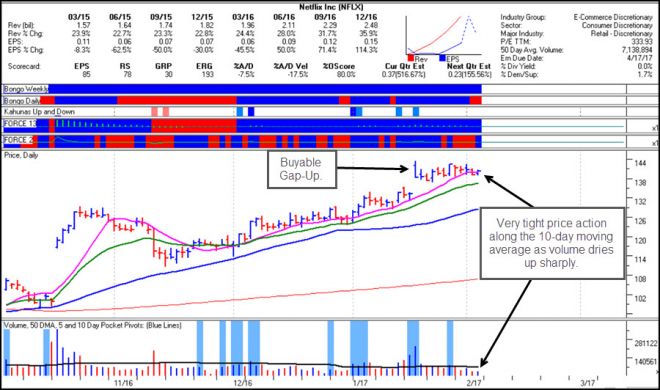 Nvidia (NVDA) has been moving higher as it attempts to retest its prior highs in the 120 price area. Earnings are due out this week, so we would not be doing anything with the stock ahead of earnings. It has however, been a nice trade since regaining its 20-day moving average a couple of weeks ago.

Quantenna Communications (QTNA) may be setting up for another upside move as it regains its 50-day moving average on a five-day pocket pivot. Note how volume dried up in the extreme right at the lows of the pullback to the original pocket pivot in early January. QTNA had previously had a 20%-plus move in just two days after we reported on its as a pocket pivot within the base on January 4th. That sort of move is generally one we would look to sell into given the extremely high time value of the trade in what has been primarily a swing-trading type of environment. 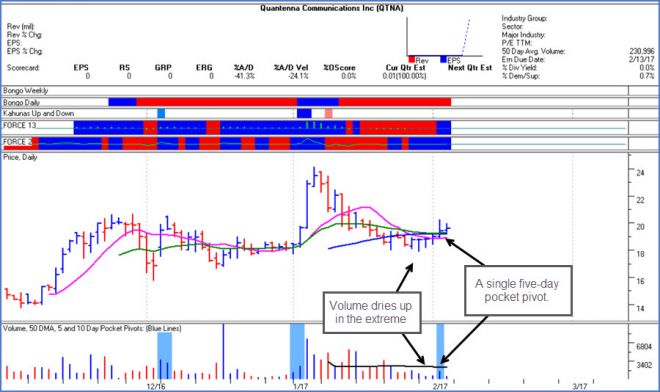 Veeva Systems (VEEV) found support along the lows of its current base structure and recovered on Thursday with a nice roundabout pocket pivot move. This remains buyable on small pullbacks into the 50-day moving average. VEEV is expected to announce earnings on February 28th. 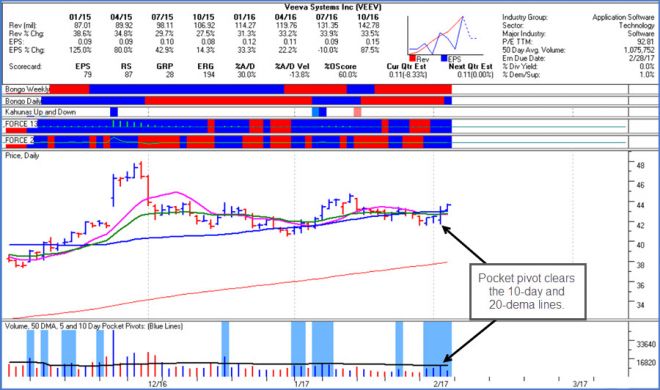 U.S. Steel (X) posted a pocket pivot on Thursday as it moved above its 50-day moving average. It then closed just below the 50-day line as volume declined sharply and held in a very tight range, so this could remain actionable here using the 20-dema as a selling guide. Keep in mind that just as with gold and silver, numerous news-driven cross currents can add to the sometimes schizophrenic nature of these stocks.