General Observations: No new names were added via Pocket Pivot or Buyable Gap-Up Reports as none were issued throughout the week, and no names were removed during the week. We did see a pocket pivot breakout to all-time highs by Netflix (NFLX) on Friday. The stock has been buyable along the 10-day line following previous pocket pivots that we have reported on over recent weeks, so we saw no reason to report on another pocket pivot, especially going into earnings this coming Wednesday.

Currently we have three steel names on the list, AK Steel Holding Corp. (AKS), Steel Dynamics (STLD), and U.S. Steel (X). All three names have been building consolidations as they head into their respective earnings reports nearer to the end of the month. Currently all three are testing their 50-day and 10-week moving averages on the daily and weekly charts, respectively.

This may put them in a lower-risk entry position at the moving averages, both of which are well-known support levels for most stocks. The other issue is whether one would want to hold these names into earnings, as that would necessitate playing "earnings roulette," which is generally not our cup of tea given the equal risk of a big gap-down reaction vs. a favorable gap-up reaction. Further, price/volume clues a day ahead of earnings have been less reliable over the past couple of years. Of course, this could revert back to the "old days" when a big volume up day ahead of earnings often preceded a strong report but until then, we prefer to take a more cautious approach.

Other "stuff stocks" on the list include big-stock copper name Freeport McMoRan (FCX), bg-stock fertilizer Mosaic (MO), and coal-related name SunCoke (SXC). FCX and SXC are expected to announce earnings on January 25th and 26th, respectively, while MOS will not announce until early in the second week of February.

All of these names can be viewed as building bases, although SXC has dipped below its 50-day and 10-week moving averages, recently. We would like to see how it acts after earnings on the 26th. MOS is holding up near its recent highs while FCX, shown below, constructively found support at the confluence of its 10-day and 20-day moving averages. 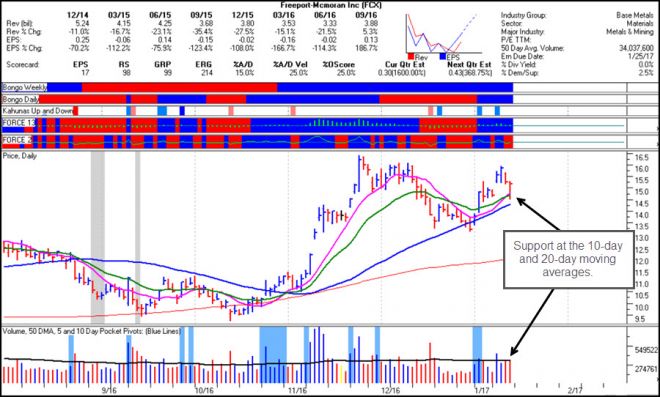 As we progress through earnings season, one may consider taking at least partial profits ahead of a particular stock's report date if the stock has had a big move since we reported on it. Two examples would be Glaukos (GKOS) and Box (BOX), which are not expected to announce earnings until the end of the first week in March.

GKOS peaked out on Friday as it reversed on a breakout attempt from a cup base. At that point it was 13% beyond its closing price on the day we reported on it as a buyable gap-up (BGU), six days ago on the chart. While earnings are still over three weeks away, it is possible that the stock will build a handle to this current cup base after finding resistance near the left-side peak of the pattern. 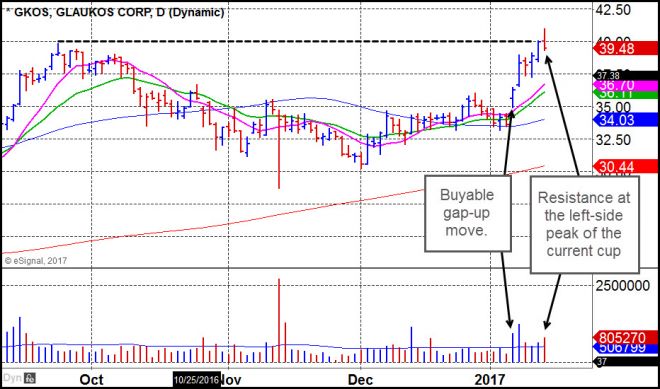 BOX has been on fire since we first reported on it as a BGU at 15.05 on January 6th. It has also recently broken out of a double-bottom base, but we prefer the early entry on the BGU three days earlier. The stock is now extended and should be watched for any pullbacks to the prior base breakout point around the 16 price level. 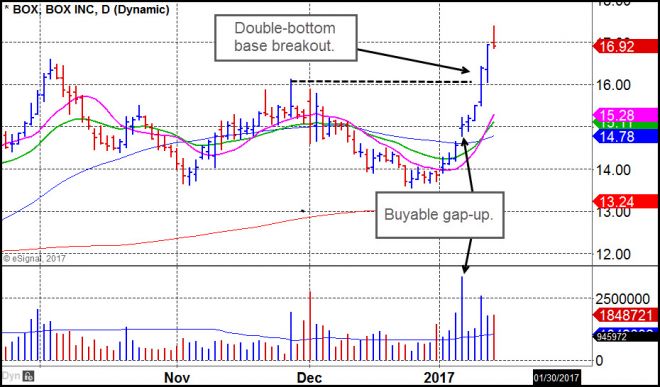 Arista Networks (ANET) is an interesting situation as it has been quite volatile over the past few days, even giving the appearance of failing on its prior "three-weeks-tight" (3WT) flag breakout on Thursday as the general market sold off early that day. That, however, turned out to be a big shakeout as the stock recovered to close back above its 20-day exponential moving average and the prior 3WT breakout point.

The stock is now holding tight at its 10-day moving average and just above the $100 Cenury Mark. This keeps it in play as a Jesse Livermore Century Mark Rule buy situation, using the 10-day line as a tight selling guide. However, given that the stock is still within its about 1% of its 3WT breakout point just below the 99 price level, risk is relatively low here even if one uses the 50-day line as a wider selling guide. 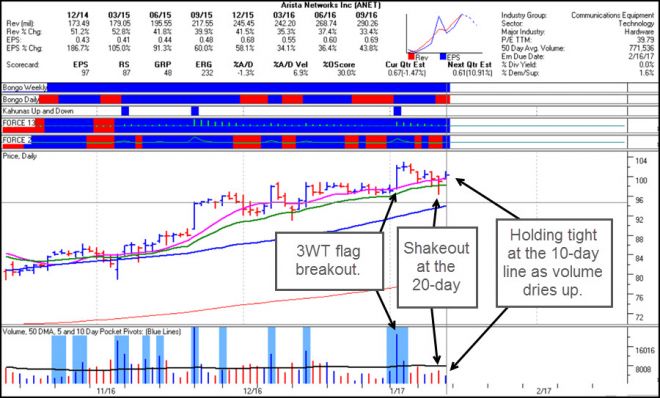 Quantenna Communications (QTNA) illustrates the need to take at least partial profits when a stock gets wildly extended, particularly when it is a thinner name as QTNA is. Once thinner names begin to pullback, investors all trying to get out through a narrow exit door can exacerbate the downside movement. QTNA moved nearly 20% in almost two days after we reported on it as a pocket pivot buy set-up. That was also before the next day's further move higher when it finally peaked.

Now QTNA has actually dropped back into its base the prior base breakout point, further highlighting why we prefer the early entry point offered by the initial pocket pivot within the base. Volume picked up sharply on Friday as the stock dropped below its 20-day moving average. This may find support somewhere along the 50-day moving average, although it is possible that Cinderella has already come to and left the ball on this one. In this market environment, thinner names often lack solid institutional support to carry them considerably higher. 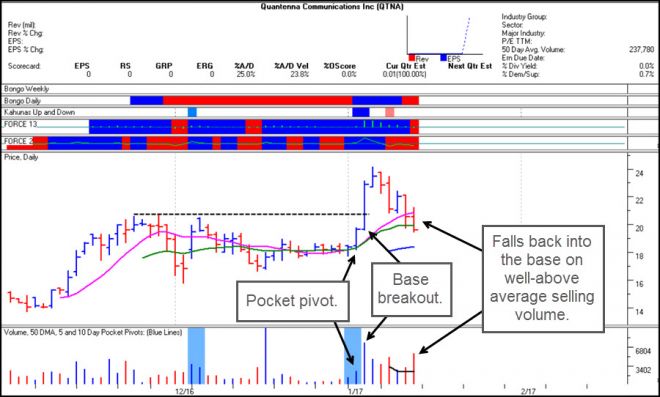 If one is able to play these thinner names, being pro-active and taking profits in QTNA as it streaked nearly 20% higher in just two days, puts some cash back in one's pocket and allows one to sit back and see how the stock acts on any pullback. In the meantime, another thin name on our list, development-stage bio-tech Myovant Sciences (MYOV), may be setting up for another one of what has become its trademark upside rocket moves that don't last more than a day.

Here we see the stock holding tight along its 20-day moving average as volume dries up in the extreme, well below what we would refer to as "voodoo" levels. 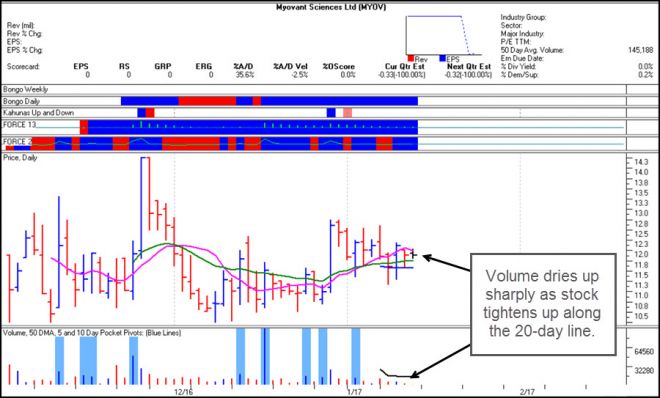 Both Amazon.com (AMZN) and Facebook (FB) have continued higher after posting roundabout types of pocket pivots seven and six trading days ago, respectively. Both remain extended, with AMZN expected to announce earnings on January 26th and FB on February 1st.

JD.com (JD) is holding tight in a short three-day bull flag, but was previously buyable along its 50-day moving average per our pocket pivot reports at that time. The stock does remain within buying range of its prior pocket pivot, using the 50-day line as your selling guide.

Nvidia (NVDA) is still holding along its 20-day moving average after posting a climactic top in December. We are watching this closely to see whether it can find support here or down at the 50-day moving average, at which point it could try to build a new base. While the climactic upside move in December was clearly a near-term climactic move one could sell into, it is not yet clear to assume that NVDA has put in a final top.

Argan (AGX), which has rallied over 28% since we first reported on it as a pocket pivot on November 11th, has been working on a base over the past three weeks. It recently undercut two prior lows in its current base at 69.50 and 69.60, closing Friday at 70.70. Near-term this creates an undercut & rally situation, similar to a Wyckoff Spring, where one can go long the stock using the lower low at 69.50 as a tight selling guide, with an additional 1-3% of downside porosity depending on one's personal risk-preference.

Based on how AGX has acted so far, one could implement the Seven-Week Rule here and simply use the 50-day moving average at 66.46 as a maximum selling guide. The question, however, is whether AGX is more the stuff of an NVDA or more like other stocks in this market that can have 15-30% upside moves from a buy point (pocket pivot or otherwise), and then top out. Its group rank is strong at 16, putting it in the top 8%, earnings and sales have been accelerating, and it is likely to benefit from Trump's pro-business infrastructure policies as AGX provides engineering, construction, and telecommunications infrastructure services. 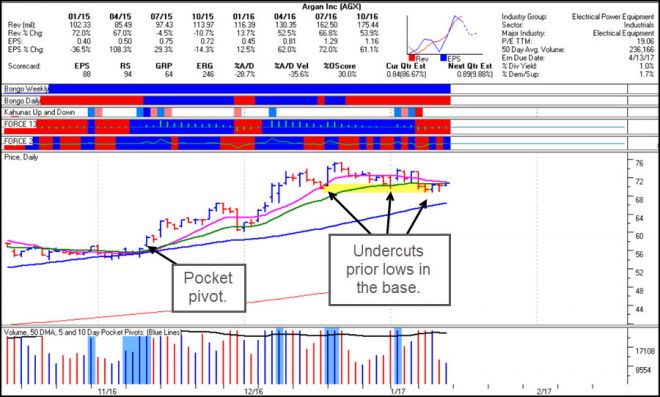