The Focus List continues to dwindle as more names on the list have come under pressure. This has occurred even as the major market indexes remain in choppy ranges after being unable to make any further upside progress following the prior week's gap-up move to all-time highs two Wednesdays ago.

It is possible that the market is going through a period of digestion, but we would like to see more pronounced rotation into nascent leadership, which is not really taking place currently. That said, the market can bounce around for a while as it tries to sort itself out and perhaps give new leadership time to set up. We will continue to respond to real-time market evidence as it presents itself in this regard.

Both the Market Direction Model (MDM) and VIX Volatlity Model (VVM) remain on their buy and sell signals, respectively. (Note, a VVM sell signal is selling volatility so is anticipating the market moving higher.)

Amazon.com (AMZN) has made zero upside progress since its late February base breakout, but it remains within buying range of the base breakout point (in fact, right at the buy point, roughly) using the top of the base as a selling guide.

Alibaba (BABA) remains within a six-week base but has not been able to make substantial upside progress since its January buyable gap-up after earnings.  Nevertheless, the stock is holding along the 20-dema with volume drying up, which puts it in a lower-risk entry position using the 20-dema as a tight selling guide.

Chemours (CC) is trying to get support at its 20-dema. It has had a big price run. Recent volume has been somewhat quiet. Given its relative strength, should the market head higher, CC should outpace the general market. If not, it could be a sign to keep stops extra tight, such as any undercutting of its 20-dema which is 1.7% away. If the general market is weak, CC has a tendency to undercut its 20-dema such as on 9-13-16 (1.5% under) and 10-13-16 (3.8% under) then head higher, outpacing the general market. Note that volume in both cases remained below average despite the correcting S&P 500. For those with longer time horizons, a maximum selling guide should be any undercutting of its gap day at 31.4, or 4.7% away, though we would advise using the 20-dema as your selling guide since using the maximum selling guide would presume a correcting market. There is never any guarantee that the next correction will be contained to within a few percent. 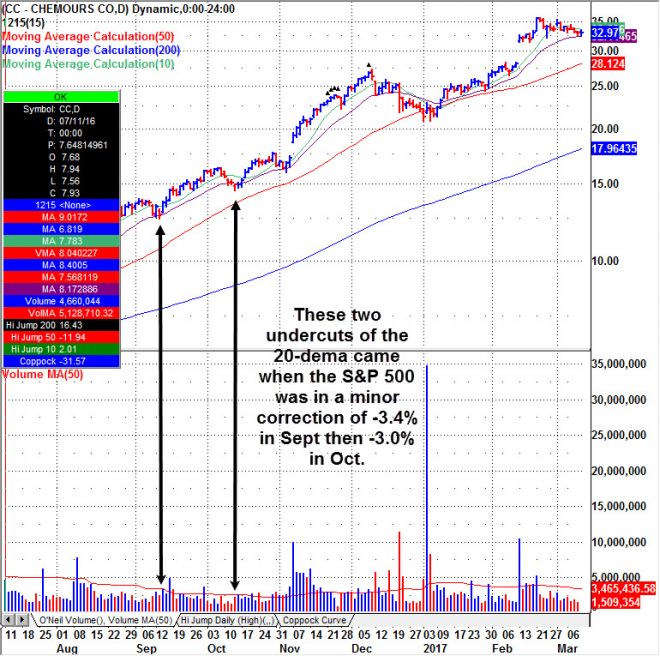 Momo (MOMO) had a buyable gap-up move on Tuesday after earnings, and that led to a huge upside move on Wednesday that had a climactic look to it. On Thursday MOMO reversed back to the downside, giving up most of Wednesday's big price move on very heavy selling volume. For now the 29 intraday low of Tuesday's BGU remains a maximum selling guide. 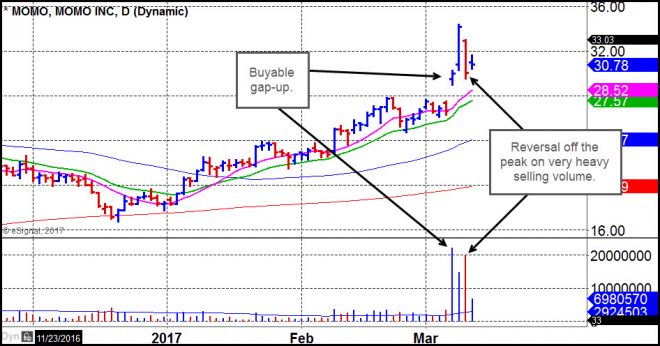 Netflix (NFLX) is stuck below its 20-dema and has failed to go anywhere for nearly two months since its buyable gap-up after earnings in January. The 138.25 intraday low of the BGU day remains a selling guide for the stock.

Quantenna Communications (QTNA) is holding tight with volume drying up after posting a pocket pivot on Wednesday. It is roughly in a buyable position using the 10-day line as a tight selling guide. 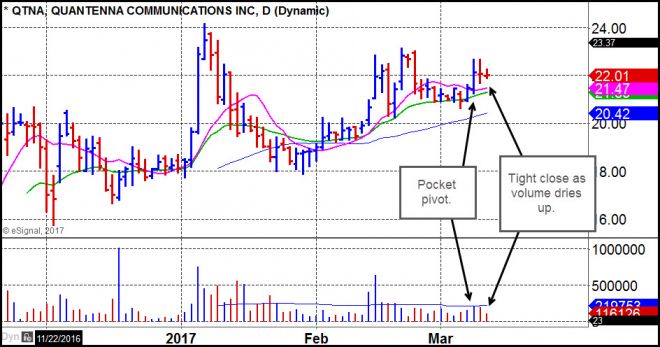 Trade Desk (TTD) has gone up nearly 50% since it was last buyable on a pullback to the 50-day line back in early February as referenced in our Focus List Reviews at that time.

Veeva Systems (VEEV) is moving back up to the highs of its wild shakeout and pocket pivot day's trading range that occurred over a week ago. Volume over the past two days has come in above average as the stock has moved up and off of its 10-day and 20-day moving averages. 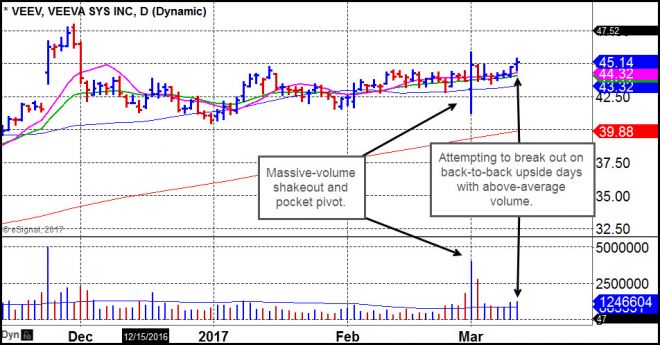