Market Lab Report - Inflation's long tail; How to catch the next big winner; On WW 3

The Metaversal Evolution Will Not Be Centralized™
Inflation's Long Tail

Inflation has a long tail. It tends to persist for at least a couple of years after it starts to spike. The 1970s were illustrative of this. This suggests that crippling double digit inflation will perniciously persist worldwide until at least 2024. The real rate of inflation in the U.S. is not 7.5% but somewhere above 20%. 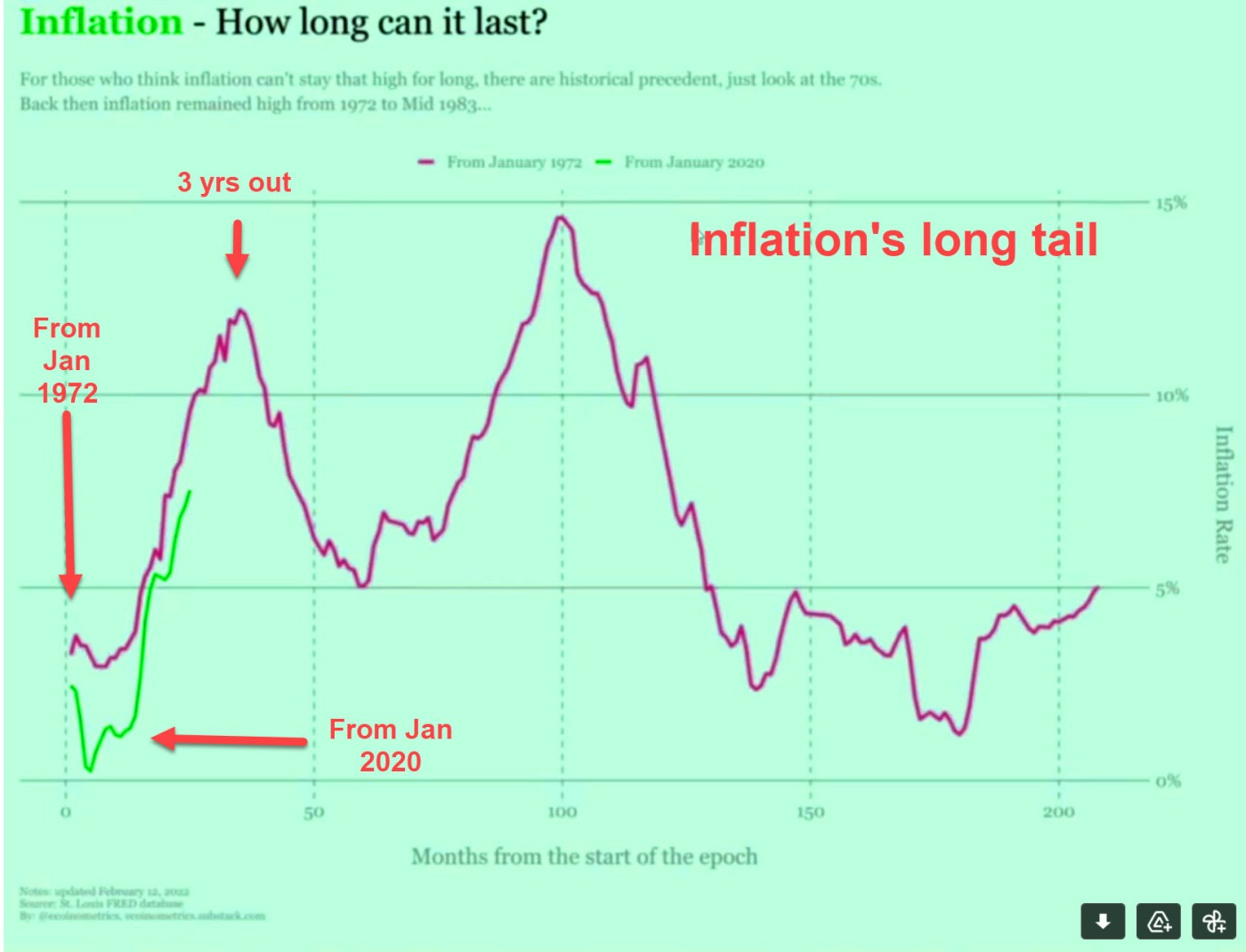 Fiat has a limited lifespan. Interestingly, the average life of a reserve currency has dropped from a few hundred years prior to the 15th century to roughly 100 years since then. The U.S. dollar is right at the average. Tipping point? #bitcoin 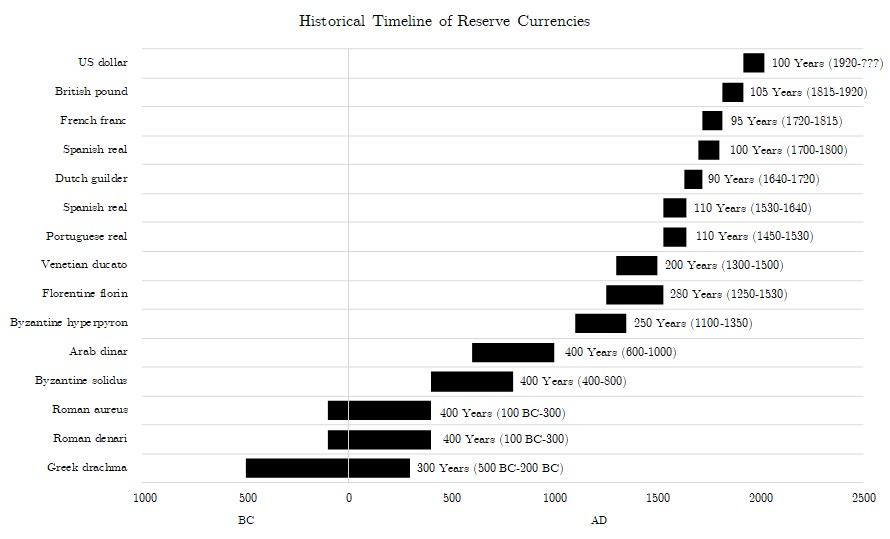 How to find the next big winner

Q: I know we are on a sell signal and per crypto report aren't currently recommending long positions, though I believe you mentioned recently to keep an eye out for anything bucking the trend.

API3 is popping.  I have followed this token and it has tended to drop back down quickly after spikes up, and I wouldn't be surprised to see it come right back down to the $3-5 range, as it did after brief blips up on Coinbase and Binance listings.  It was impressive at the ETH Denver show. Maybe after Eth Denver/hype is over it will not be able to escape the gravity downtrend that seems to be acting on all crypto/stocks, but just wondering if you think this would be one to consider adding if it continues to hold up or increase and buck the downtrend.

A: Besides LUNA, API3 is indeed one of the only altcoins bucking the trend. It had a massive price increase in two days so can be hard to catch on the first pump. Further, the coin does not necessarily prove itself on the first big move higher off lows. It is usually a better strategy to wait and see how it trades in the coming days. If it can hold relatively tight in a sideways or downtrending market, then its next move higher out of any constructive formation it forms can be bought. Fundamentally, API3 shows great promise as a leader in the web3 API economy. Its market cap is under $500 mil so still has much room to run. But in a bear market, most all names will suffer severe drops in price, often well exceeding 80-90% from peak. 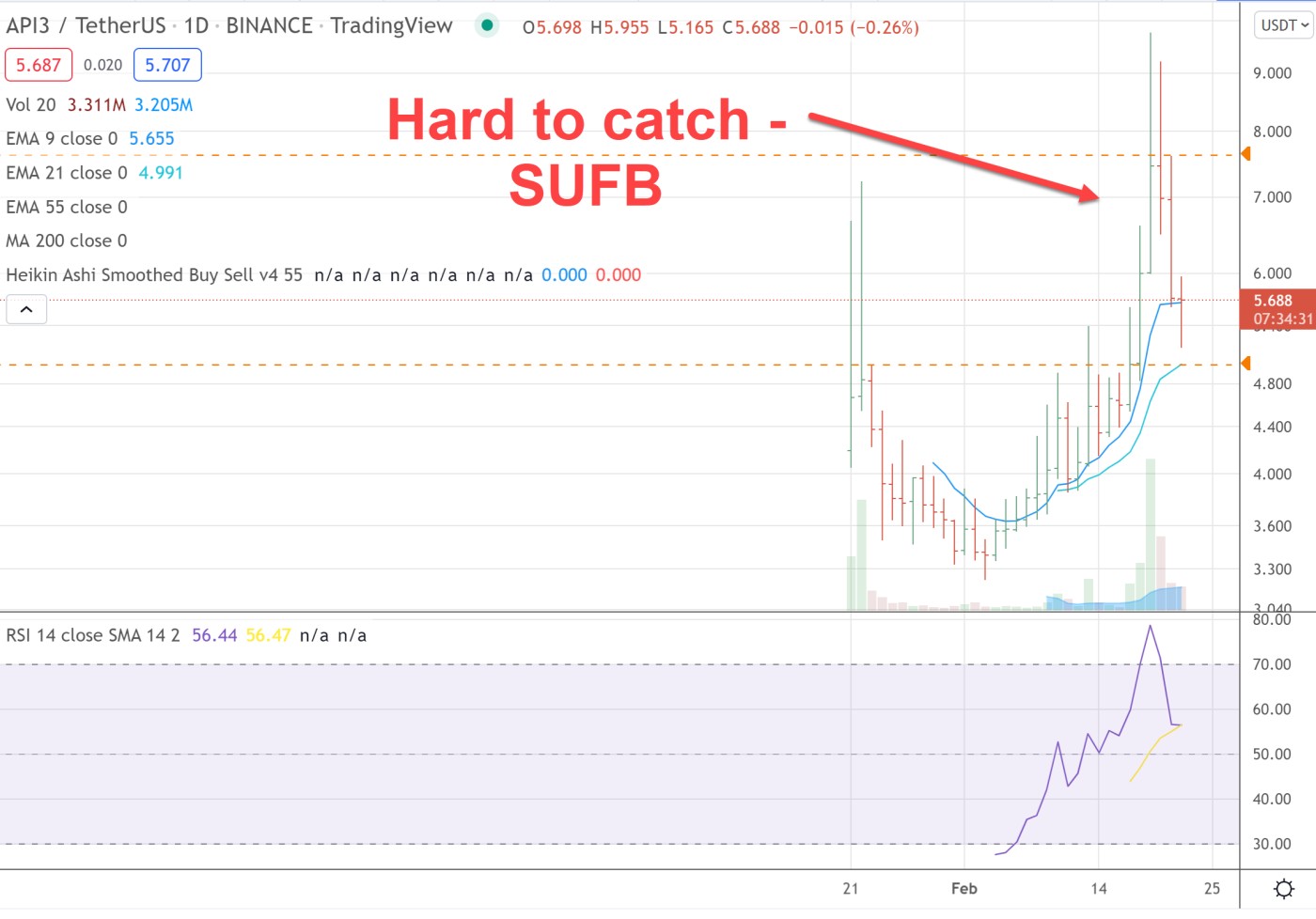 Nevertheless, as one prime example of an altcoin bucking a trend, here is NEO (Antshares) back in 2017. I bought this a few times when it was trading well under $10 as it was the only coin bucking the bursting of the mini-bubble in June-2017. The charts are log plots so what appears to be a small drop in ETH is actually nearly a loss of 2/3 of its value: 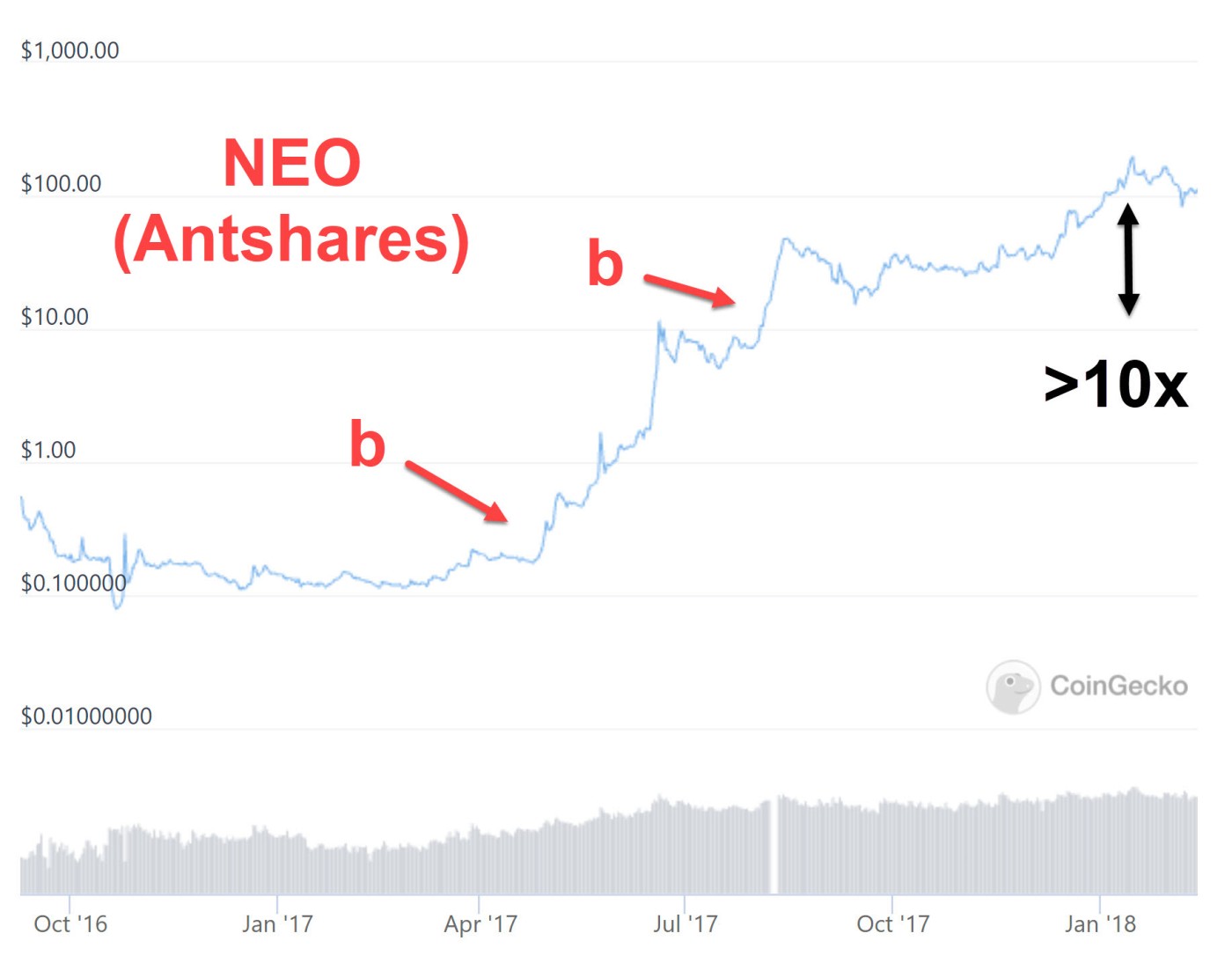 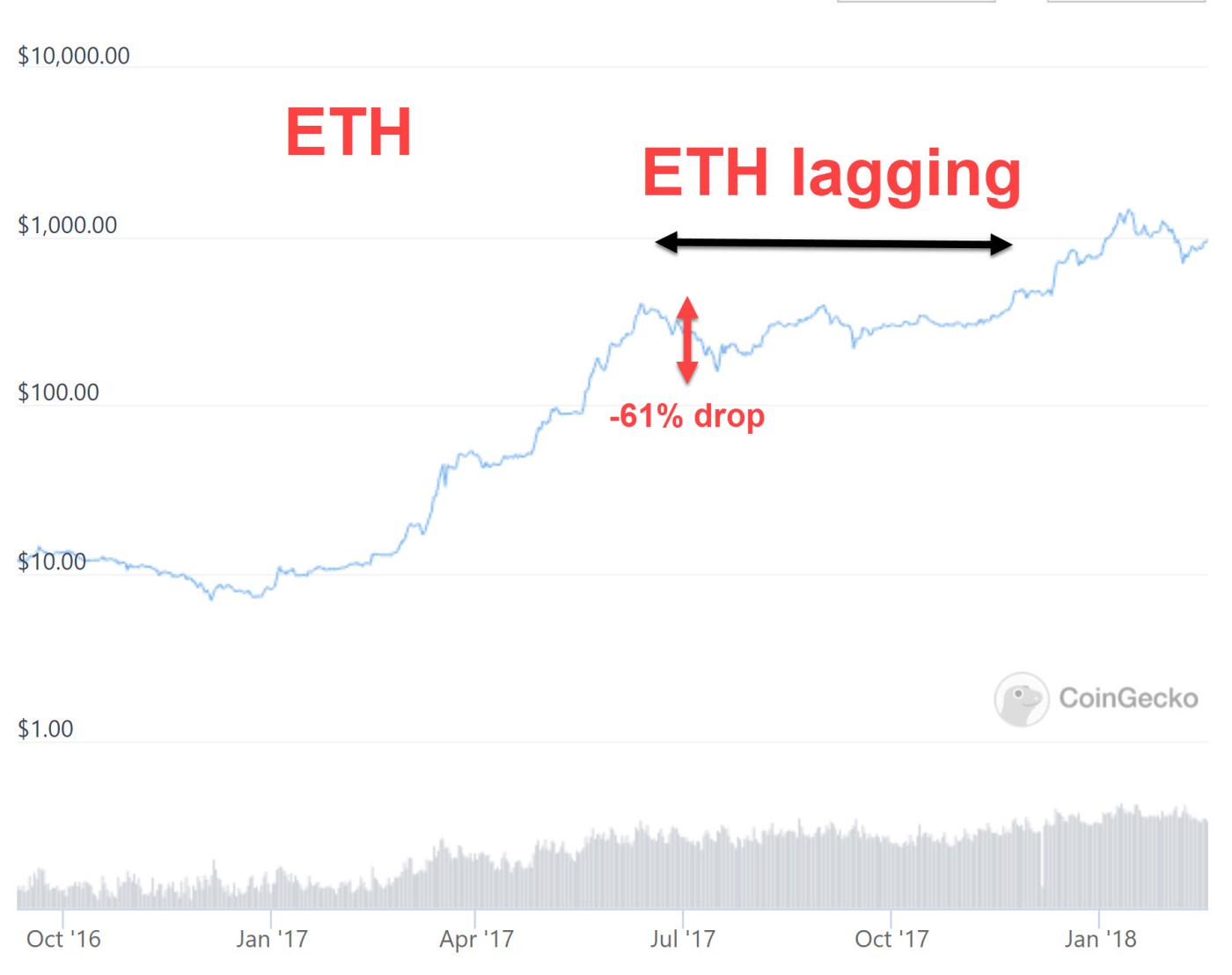 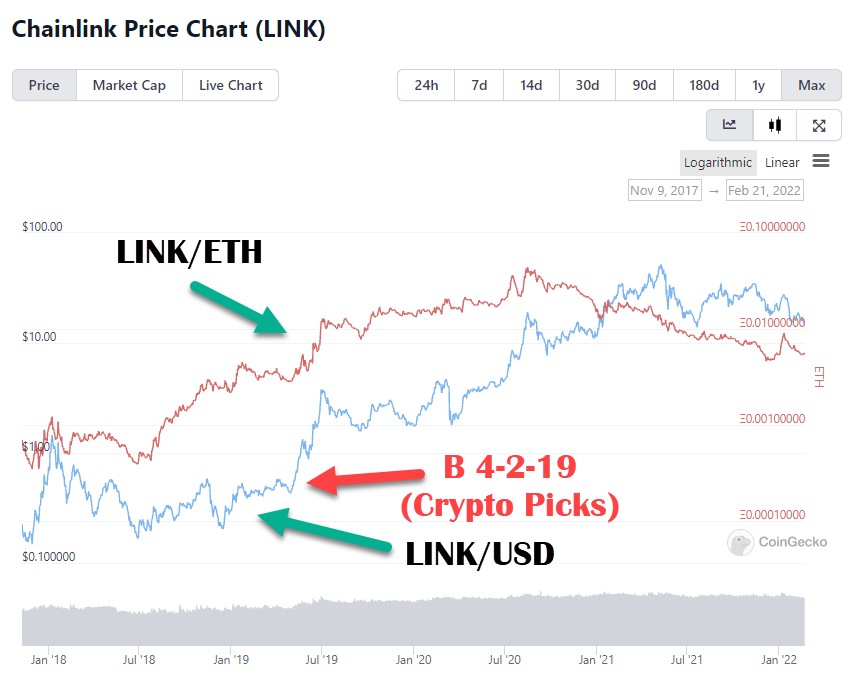 On Ukraine, Russia, NATO, and WW 3

Putin follows a Stalinesque ideology given his upbringing. He views the fall of the USSR as the "greatest geopolitical catastrophe of the 20th century." Putin wants Russia to be the global dominant force with the annexation that only begins with Ukraine.

Ukraine has been a legitimate country since 1991 when the USSR fell as recognized in the Lisbon Protocol along with the 1991 law "On Legal Succession of Ukraine". Russia has no entitlement over Ukraine. If history is any guide, Chamberlain's appeasement towards Hitler allowed him to annex the Sudetenland led to WW 2. Such authoritarian aggressors cannot be appeased.

At present, the US, EU, and UK are appeasing Putin by limiting the sanctions. With record debt, soaring inflation, and hampered GDPs, the concerns of major allies about the cost of energy and fuel remain high leaving many sanctions against Russia off the table. Such nations continue to buy from Russia as to them, the price of blood of innocents is less important than euros or points at the polls. At the very least, barring Russia from SWIFT would be a good move yet has yet to happen.

No NATO country can risk a casualty caused by Russia as this would trigger NATO's Article 5 in which all NATO allies jointly enter into a war which could lead to WW 3. So Ukraine stands on its own with Putin already having calculated ways to work around sanctions; he now favors bitcoin. Russia’s own advance preparation, in particular its build up of more than $600 billion in international reserves, will also help it weather the sanctions. Putin warned: “The United States will not be left out, with its ordinary citizens feeling the consequences of the price increase in full.” Putin has said that while the US may have more global power, Russia has nuclear weapons.

Even if Russia ends its attempts to annex Ukraine, they are likely to leave a Vichy government and a permanent military presence in the country to use that as leverage against NATO. If the sanctions imposed on Russia are ineffective, then no tool outside war will compel them to slow down their aggression given Putin's mindset. Georgia and other countries are at risk.

The core of blockchain is political. The fight is not about the price of tokens. It is about liberty and freedom to give people the power to be their own institutions, to be their own bank, to store and trade value in a borderless manner. Blockchain spurs the kind of society that can exist where there are no more kings or dictators or presidents, just decentralized bonds with others with the means and tools to work together towards common ends. Such are the nature of DAOs.

Freedom doesnt mean one is safe. Freedom means you have the ability to live out your dreams according to the path you choose. You're in charge. You're allowed the freedom to fail or succeed. Freedom comes at a price but is worth the fight. Inflation, debt, and authoritarianism are not going away. Wealth creation and productivity is exponential, but one thing is sum zero: as the individual gains freedom and liberty, authority and power is drained from the "kings". The ability for an individual to succeed or fail by their own choosing is in contrast to authoritarianism which only allows one to operate in whatever space the dictator mandates. Anything outside that is punished harshly.

Is it wise that so few can have so much power and influence over the world order especially if they are able to maintain that power into an advanced age without checks and balances?

Blockchain's value is in the freedom to transact which is the basis for all other freedoms. Blockchain replaces payment networks like PayPal and Visa which enslave you; if they dont allow you to transact, you have no more freedoms. #bitcoin

The point of decentralization isnt just about resilience, reliability, and resistance against malicious actors. It is also about the reconstruction of institutions so that we no longer have strong leaders who stay in power too long then start changing things in ways that harm all of us without any oversight or accountability. Once humanity wakes up to the promise of blockchain and cryptotechnology, this will be the moment when it realizes it can do things in a way that renders corrupt, old legacy systems extinct. So when the Warren Buffetts, Nouriel Roubinis, and Nassim Talebs of the world say bitcoin and blockchain are worthless, they show their deep ignorance towards arguably the most revolutionary technology of our time.

The current world order is in no state to manage technology, life, and freedom. We either allow dictators to take things via transnational arrangements which give them enormous unelected influence over our lives, or we take our lives back by adopting the technology of freedom which is blockchain.