Given the numerous transformational tipping points on which the world sits, let's take a first principles approach to Bitcoin and its national strategic implications that can minimize the attack surface on sovereign wealth. Bitcoin's PoW (proof-of-work) replaces MAD (mutually assured destruction) with MAP (mutually assured preservation) where it becomes a defense system for all countries. Countries will reach a stalemate where they can no longer settle disputes over monetary systems. Countries are currently forced into a position to subscribe to a nuclear power which could DoS (denial-of-service) attack them if they are forced to follow their network. By Satoshi's invention of a fully decentralized, electric proof-of-work network, we restore zero trust and egalitarian control over monetizable property. We have created a new Schelling Point where it will be in every country's interest not to subscribe to a nuclear power that could DoS attack them, but to subscribe to a non-sovereign monetary system to protect their national treasuries. Bitcoin is the new Schelling Point in warfare instead of the monetary reset. The value proposition of Bitcoin is less attractive as a monetary system reset than it is as a wholly new form of property defense for countries.

The world has observed major countries such as Canada threatening to freeze people's assets on a whim. This would be a clear obstruction of the second amendment in the U.S. which decentralizes power projection to prevent U.S. authorities from DoS attacks on citizens' private property. Private property in this context are digital assets. Bitcoin as the key store of value uses electricity to defend the ledger against DoS attacks, thus protecting owners' private property. The more electricity bitcoin uses, the more property is defended. On a micro scale, this avoids spilled blood. On a global scale, this averts a hot war.

At the same time, the world has seen how $600 billion in Russian central bank assets were frozen by sanctions issued by western allies. This tit-for-tat has led to escalating conditions which often lead to hot wars thus mass destruction of lives, livelihoods, and property.

The world needs a trustless platform on which to operate. How does a country ensure zero-trust & egalitarian access to air, sea, land, and digital property? Answer: A mighty air force, naval force, army, and a robust PoW infrastructure. Bitcoin levels the playing field by engaging MAP. In other words, it decentralizes the citadels of centralized power seen around the world since the dawn of humanity.

In this manner, Bitcoin addresses nuclear proliferation by making the defense of digital assets more important by use of PoW thus can be used as leverage against nuclear attack.

As opposed to MAD-motivated nuclear war, Bitcoin is the "weapon" that physically prevents attackers from denying people access to their private property without resulting in war and bloodshed. In consequence, Bitcoin is the greatest game changing human defense technology in history. Those who buy Bitcoin are supporting the development of a new defense system which can avert hot wars.

Back in the day before the air force was born, airpower was the new way for warfare, not land nor sea, but still much skepticism prevailed. Today, the new defense kid on the block is Bitcoin's PoW.

All that is to say that both Bitcoin and Ethereum should continue to find new highs but most likely only once tightening is postponed or ended. This will likely come once major stock market averages in the U.S. drop by at least 20-30% from peak prices, at which point, the Federal Reserve will find some crisis to use as the excuse for more money printing as they have done in prior cycles. In the meantime, stock market weakness will likely push cryptocurrencies lower. Since altcoins correlate to the price direction of Bitcoin and Ethereum, expect even leading cryptocurrencies to suffer deeper corrections than BTC or ETH.

In the chart below, the Fed prefers to use core inflation which is CPI less energy and food which shows 6.4% in February. But the true core CPI as measured using Case-Schiller is up 10.7% YoY. Indeed, Case-Schiller U.S. home price inflation was up 19.2% YoY. 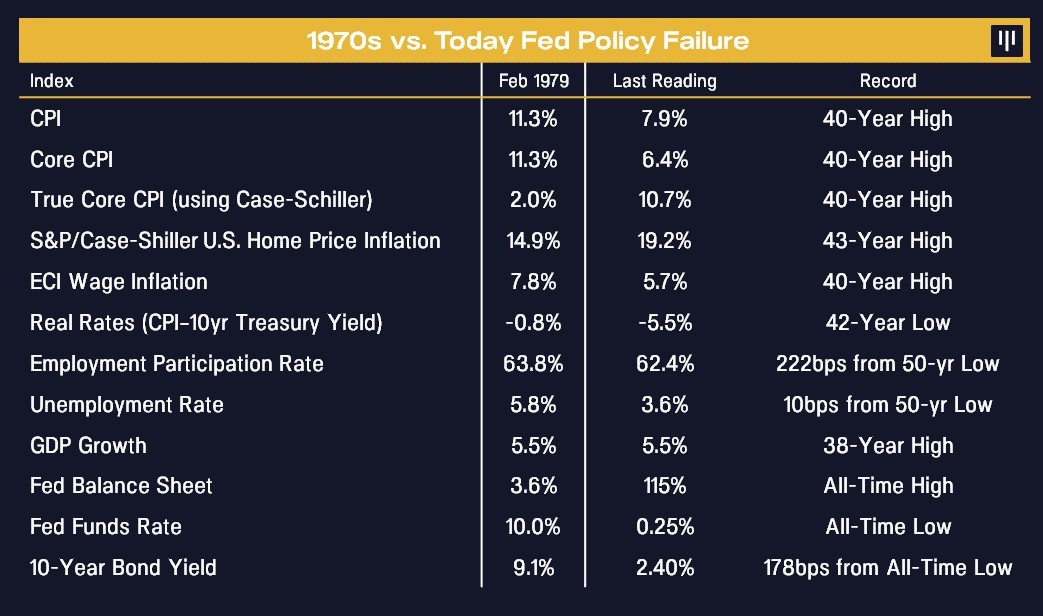 One more sobering thought is the 2-yr and 10-yr Treasury yields briefly inverted on March 29 for the first time since 2019. Recessions have typically come within several months or less of such inversions. The USD also continues to trend higher as it approaches new highs. 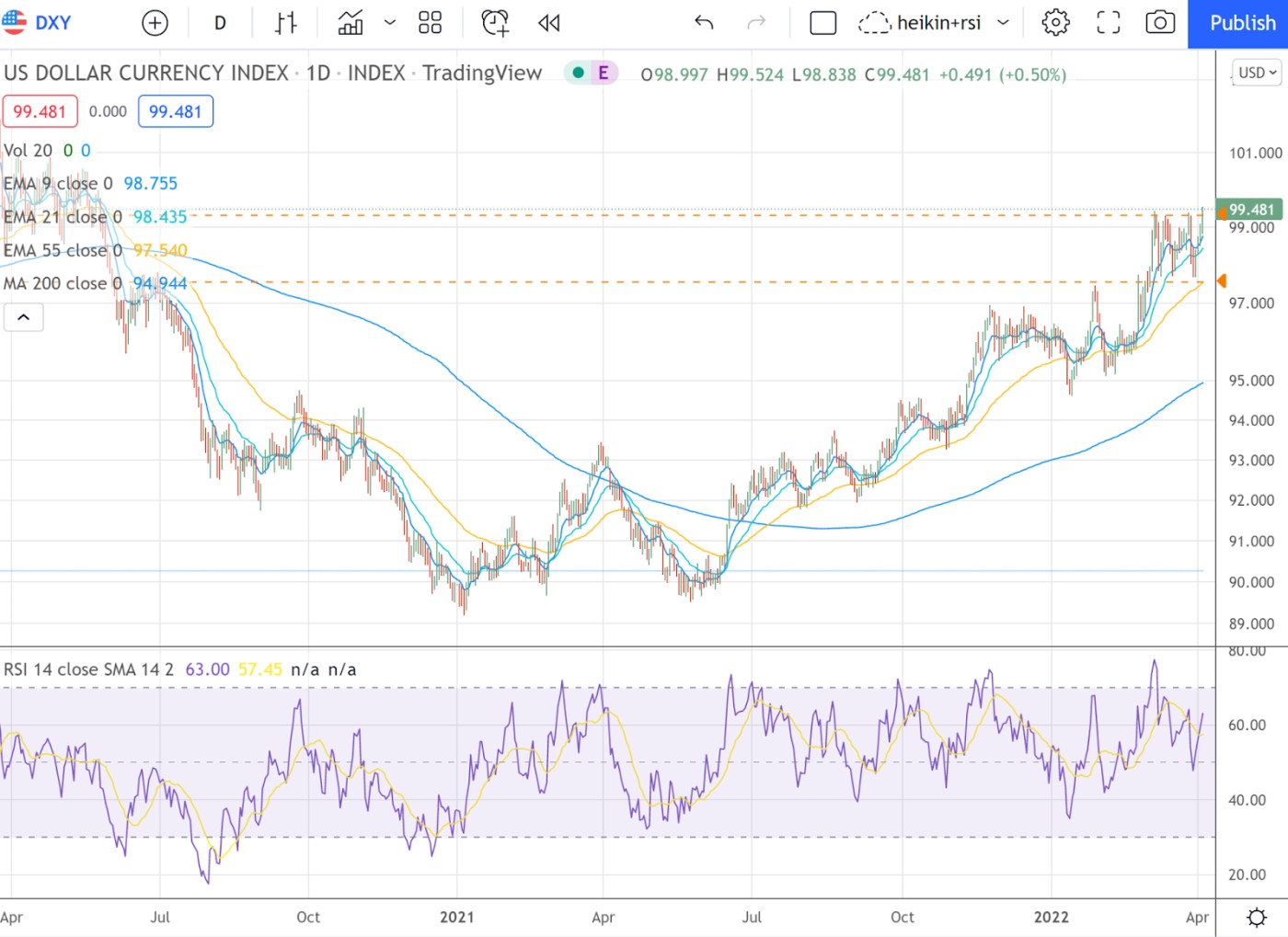 Since the Fed minutes delivered on Apr 6, the CME Fed Fund Futures is now pricing in 9 more 25 bps rate hikes this year with a 77% chance of a 50 bps hike at their next meeting in May. The Fed indicated it plans to run off $60 billion in Treasurys and $35 billion in mortgage backed securities each month, above estimates of $70-90 billion in total, but could work its way up to its target "over a period of 3 months or modestly longer if market conditions warrant." All of the above suggest the Fed will not be reversing their hawkish stance anytime soon, so if you are exposed to the long side of stocks or cryptocurrencies, keep your stops tight.