Bringing Billions to Blockchain via Quantum Poodles™
The Straitjackets

General markets remain under strain with no stimulus package at the ready along with the new wave of lockdowns in major countries such as the UK, Germany, and France. Businesses will get up to 75% of lost revenue for 2020 compared to what they made in 2019. That is a huge amount of fiat that will need to be created.

Major tech stocks such as AMD, AAPL, AMZN, FB, GOOGL, NVDA, MSFT, and TSLA are at or just under their 50-dmas. These have been the price leaders so all wait nervously for more stimulus and a quick resolution to the upcoming presidential election. Markets hate uncertainty so expect more turbulence, and a possible continuation of the downtrend.

For the first time this year, bitcoin has decoupled from stocks as its correlation with stocks has been broken since the recent top in the stock market. Grayscale ETNs GBTC and ETHE should continue to benefit. That said, should the winner of the upcoming Presidential elections remain undecided, this could create a sharp drop in the major averages and in such a situation, bitcoin could resume its correlation with stocks. While bitcoin is slowly becoming a good replacement for gold when it comes to the "fear trade", a serious drop in the major averages could bring what it brought in 2008 and in March of this year - all babies being thrown out with the bathwater. 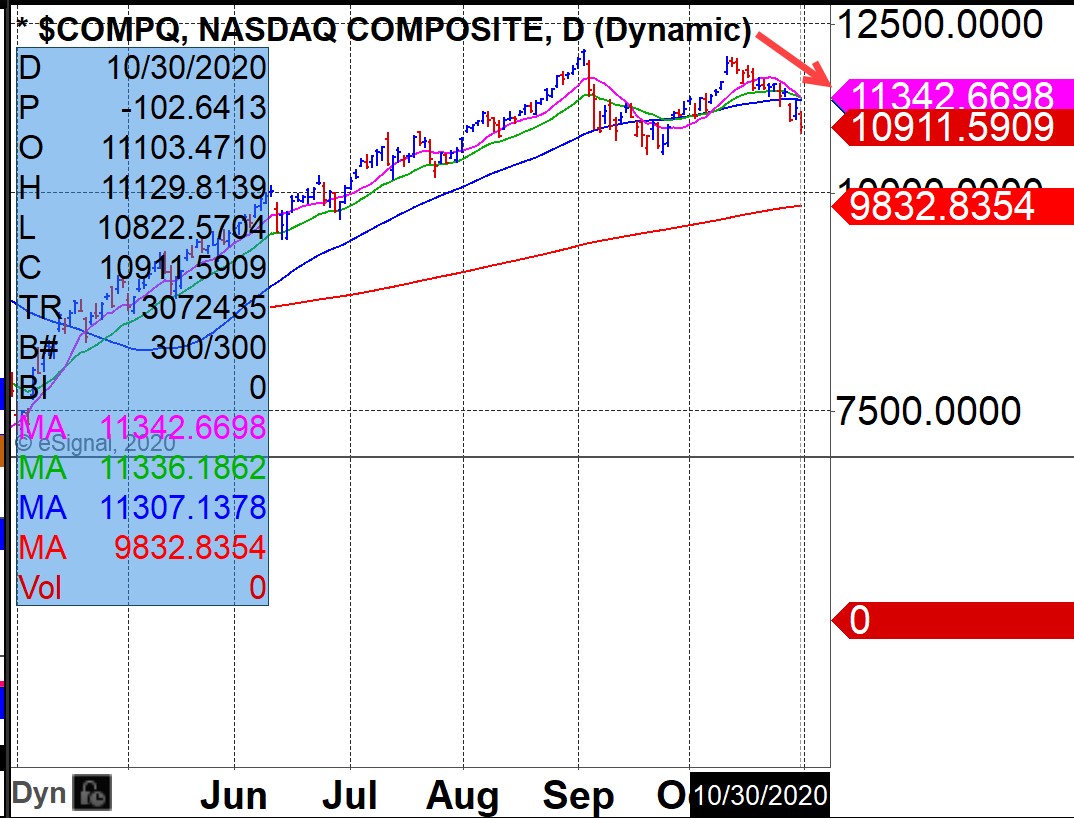 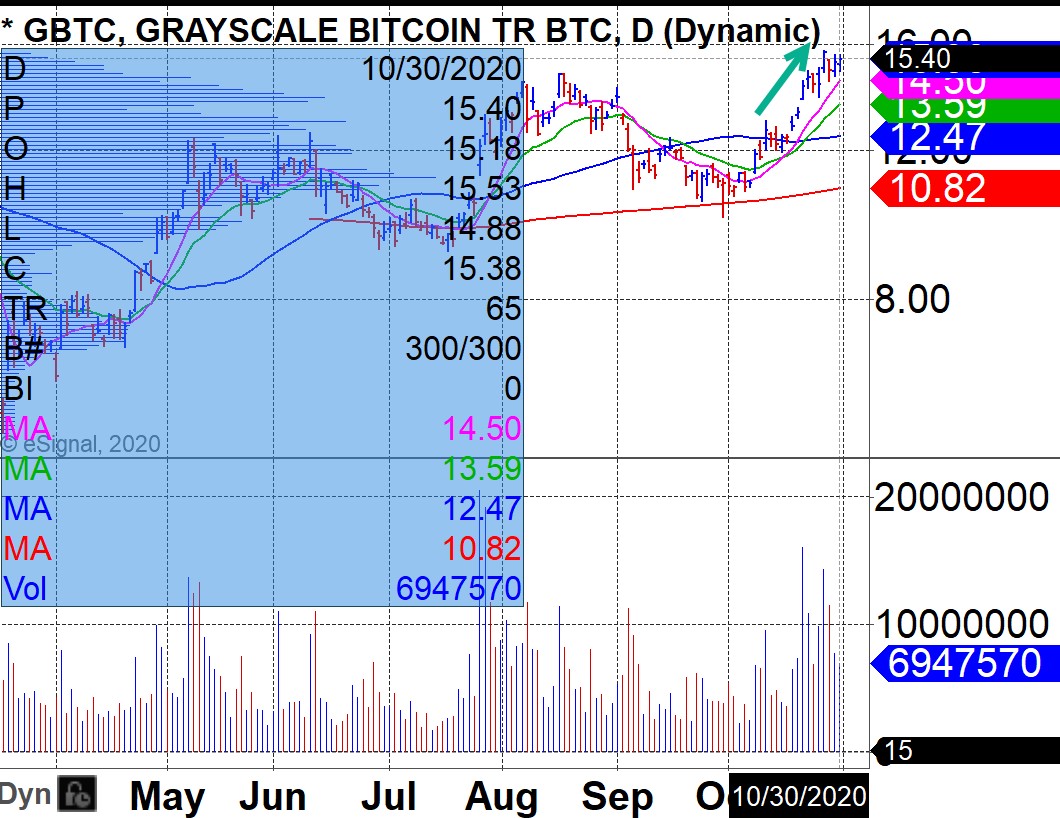 The Era of QE that was catalyzed by the financial collapse of 2008 is best understood by looking at Uncle Sam as the scorekeeper in the game. He gives points to the other teams by adding more dollars because it enriches the other currencies relative to the dollar. Meanwhile, an army of foreign Uncle Sams are doing the same. So it remains a race to debase. The whole league of teams is slowly sinking as the referees are each are giving points to the other teams.

But you can exit the game by leaving fiat by buying bitcoin or gold or hard assets. Unfunded liabilities such as pensions currently amount to $155 trillion. You dont want to be holding the currency of any country when massive sums of money will have to be created to fund pensions.

JPMorgan on Gold vs. Bitcoin

To generalize, the younger generation wants digital while the older generation says one must be able to see it and touch it, and since the older generation considers themselves wiser, unlike the foolish younger, they conclude that bitcoin is fool's gold with its use cases being scams, frauds, pornography, and money laundering. Of course, this is a simple generalization as both demographics have those who champion bitcoin while others demonize it.

JPMorgan just released a report on how gold is being threatened by bitcoin. They report how bitcoin has "considerable" upside in the long-term as it better competes with gold as an alternative currency. For bitcoin to rise 10-fold, its market cap would be under $2 trillion. For gold to rise 10-fold, its market cap would be a $80 trillion, a hugely unlikely event given that the more that gets mined, thus the more supply available, which keeps a lid of sorts on how fast its price can rise. That said, there have been mini bubbles such as in 1980 and more recently in 2011. Today's money printing party could certainly create another such bubble.

But any bubble in gold is likely to be easily overtaken by bitcoin for numerous reasons cited in prior reports. Millennials will become the dominant market participant over the next few decades as they inherit more than $30 trillion in wealth from their parents. According to JPMorgan, "their favorability towards bitcoin over gold should set up the cryptocurrency for success. Even a modest crowding out of gold as an 'alternative' currency over the longer term would imply doubling or tripling of the bitcoin price from here," JPMorgan said. Furthermore, with gold, just to transport it, you need to enlist industries for gold storage and transport. As an aside, based on projected studies as cited by various including Michael Saylor of Microstrategy, gold will be mined on asteroids within the next several years given reusable rocket technology so its supply will jump. More locally, Russia just discovered 40 million troy ounces of gold, with the mining company reaffirming that bitcoin is the scarcer asset. As a general rule, a rising price in gold increases the number of gold miners as they are incentivized by the higher price which acts as a headwind of sorts. On the other hand, if its price falls below production cost, government subsidizes the variable costs to keep the plants running so gold miners will keep producing gold to work off their fixed costs. Both the gold miners and governments are the enemy of the gold owners. Contrast this with bitcoin which is not a commodity because it is ultimately scarce. You cant mine more of what is allowed by mathematics. Name something that is a liquid asset that you cant produce more of if its price skyrockets. Economics always wins which spurs human ingenuity to always find a way.

Bitcoin guards against regime failures. From 1900 to 2000, failures in both fiat, banks, and gold prevailed across most all cities. In Paris when the Germans arrived in 1940, you would have lost your savings. In Berlin, failures occurred both in 1918 and 1945. Give me a city where you would not have lost part or all of your money or assets due to failures, regime changes, or revaluations. Maybe Geneva or Zurich. In any event, over the last century when you account for all countries that have come and gone, there is more than a 95% chance the banks fail or the regime fails.

Potentially with the transformation of political structures catalyzed by blockchain technologies, nation-state governments may become a relic. The digital age may bring localized city-states, driven not by military power but by partially decentralized economies. We look at old times before separation of church and state and think how primitive things were at that time. Future generations may look at our times and think the same. "Economics and state were NOT separated? How can that be?" -Student X Æ Q-5 in the year 2084.

In terms of regulatory approvals, we have recent news that nationally chartered banks can now custody cryptocurrency which includes bitcoin and the hundreds of alt coins. An unclear area of U.S. crypto regulation just got much-needed clarification, just in time for the wave of RIAs and other institutional investors now buying bitcoin for their customers. This is a major step in terms of banking and regulations around blockchain that will help the space mature.

In a related turn of events, Singapore's largest bank DBS who used to call bitcoin a scam has launched a crypto/fiat trading exchange. And over in India where regulations remain uncertain, a major Indian bank United Multistate Credit is rolling out services for cryptocurrencies across its 34 physical branches, spurred by the Supreme Court of India having removed the crypto banking ban earlier this year.

Over in DeFi, not insignificantly, the amount of value locked up in what are called DeFi protocols exceeded $10 bil just recently despite the recent pullback in cryptos. It was only around $1 bil in June. This is exponential growth. The internet revolutionized access to content. Blockchain will do the same but with financial markets via DeFi. Centralized systems such as traditional banks will adopt DeFi into their systems.

In 1995, no one could imagine online versions of encyclopedias that could be edited by anyone around the world and be just as if not more accurate than the Encyclopedia Britannica. Of course, a decentralized Wikipedia which is unaffiliated with the original Wikipedia is en route via blockchain tech which dispels the "gang" tackle that can occur on Wikipedia in terms of which entries are allowed, creating inconsistencies as well as an incomplete picture in a number of cases.

That said, such housekeeping is happening in the world of finance by applying the efficiencies of blockchain that provide low cost, frictionless, borderless transactions applied to lending/borrowing, exchange infrastructure, margin, and so on, which will make old school banking with its high costs and deep inefficiencies a distant memory.
Like what you read?
Let us help you make sense of these markets by signing up for our free Market Lab Reports:
This information is provided by MoKa Investors, LLC DBA Virtue of Selfish Investing (VoSI) is issued solely for informational purposes and does not constitute an offer to sell or a solicitation of an offer to buy securities. Information contained herein is based on sources which we believe to be reliable but is not guaranteed by us as being accurate and does not purport to be a complete statement or summary of available data. VoSI reports are intended to alert VoSI members to technical developments in certain securities that may or may not be actionable, only, and are not intended as recommendations. Past performance is not a guarantee, nor is it necessarily indicative, of future results. Opinions expressed herein are statements of our judgment as of the publication date and are subject to change without notice. Entities including but not limited to VoSI, its members, officers, directors, employees, customers, agents, and affiliates may have a position, long or short, in the securities referred to herein, and/or other related securities, and may increase or decrease such position or take a contra position. Additional information is available upon written request. This publication is for clients of Virtue of Selfish Investing. Reproduction without written permission is strictly prohibited and will be prosecuted to the full extent of the law. ©2023 MoKa Investors, LLC DBA Virtue of Selfish Investing. All rights reserved.
FOR OUR FREE MARKET LAB REPORT :