The Metaversal Evolution Will Not Be Centralized™
A Perfect Storm

The "perfect storm" of cross currents from tapering to inflation to C19 mutations to a very weak jobs report to another Evergrande flare-up vs. QE money printing pushed most markets into a correction only to be seen by a straight-up-from-bottom bounce due to waning C19 mutation fears, but we are not yet out of the woods. The taper tantrum is still at issue. While Bitcoin and leading alts were initially resistant to the start of the correction in the major stock market averages that started on Nov 22, when the stock market starts into a deeper correction, it yanks down cryptos as I've mentioned in prior Crypto Reports. The NASDAQ Composite is only up a few percent since late June when we took the last name off our Focus List because market conditions looked poor. In fact, this is the first time the Focus List has gone this long without a single name since this website was relaunched in 2010. Preservation of capital is a key rule when it comes to investing, or as legendary futures trader Ed Seykota has mentioned, the three most important rules of investing are risk management, risk management, and risk management.

But if the last decade is any clue, corrections in stocks tend to be relatively short lived. Bitcoin corrections also tend to be on the order of weeks unless a full blown bear results which happened twice since 2013, marking the bear years of 2014 and 2018. Both times were supported by on- and off-chain metrics which called both tops to within a few weeks as the bubbles burst and kept one on the sidelines until a bottom supported by price/volume action was put in about a year later in both cases. VSI reported on bitcoin's first re-entry point after the big bear on March 1, 2019. That said, bitcoin can still have steep corrections of typically 30-40% off peak as we have seen several times during bull markets as well as the one earlier this year that exceeded this range. These look like small blips on the multi-year chart of bitcoin such as in the year 2017 and in 2020 after the C19 induced March crash. Bitcoin is the only asset to have moved up by more than several million fold since 2010 when its average cost was under a penny. 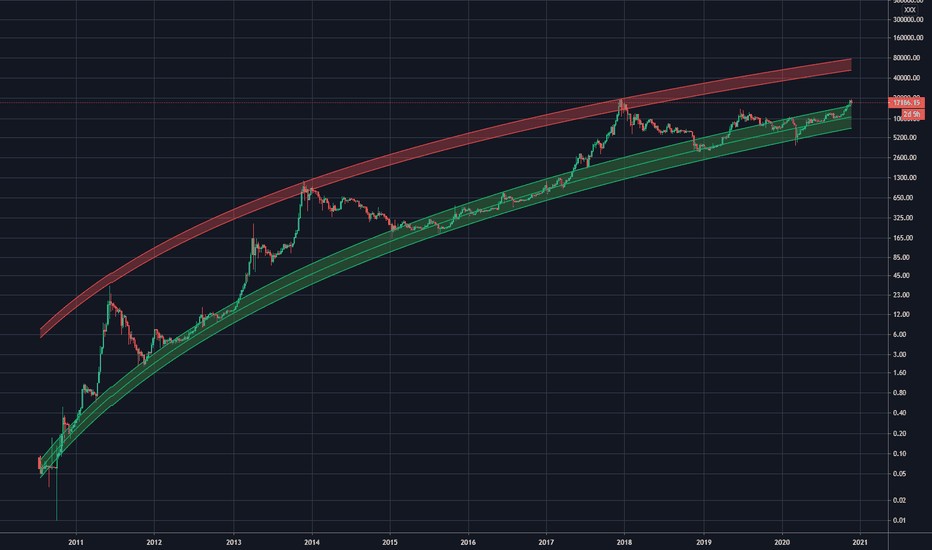 In this Era of QE, global M2 money supply continues to expand which impacts purchasing power. The increasing slope of M2 stayed relatively constant from 2012 to 2020, then C19 hit and the slope dramatically increased for a few months starting in March 2020 after which, the steepness of the slope diminished but is still markedly higher than it was from 2012 to 2020. The Fed therefore has been printing money at a faster rate since mid-2020 than ever before with no signs of slowing. History shows that QE tends to accelerate, not decelerate, over time which is why world reserve currencies have a limited lifespan.

The great debasement of fiat remains well in place. Bitcoin remains the only entity that has a fixed supply. It is still volatile so over the short to intermediate term can make a poor store of value given the steepness of its corrections, especially during full blown bear markets, but over the longer term, its value should continue to increase given the major tipping points in which the world finds itself. It's price continues to increase by at least an order of magnitude over every cycle. Old school guys such as Warren Buffett, Charlie Munger, Nassim Taleb, the economist Peter Schiff, the governor of the Bank of England, the People's Bank of China, and an acquaintance Nouriel Roubini still dont get it, and/or more likely fear it, especially if one holds a high position in government. Bitcoin forces the separation of money and state thus weakens government's grip via fiat. Meanwhile, crypto has attracted some of the brightest minds into the space, most of whom tend to be from the younger generations. But we saw this similar cycle in the 1990s with old school naysayers regarding the internet (it was born from porn and credit card fraud) and even during the famous World's Fair in 1900 where more of the younger embraced the technologies that were considered cutting edge back then. History always rhymes because the psychology that drives human cycles tend to rhyme.

While government statistics suggest more than 1 billion people live with double digit inflation, this probably underestimates the real inflation much as the U.S. still claims inflation is just 6.1% percent when it's actually 15% or more. The average cost of food is soaring. For example, food prices in the UK jumped by 27% over the last 12 months while the cost of apples and turkeys in the U.S. have doubled. With soaring prices and wages unable to keep up, the middle class is being selectively wiped out.

History shows that M2 does not contract at this stage of debt and interest rates which have resulted in and will continue to result in further multi-trillion dollar spending packages as the C19 situation, even if it were to end tomorrow, would still induce further crises as the multiple order effects due to the last 2 years of quarantines and lockdowns are pronounced. This is ultimately good for stocks, hard assets, real estate, and bitcoin/crypto. Still, spiking inflation, a strong dollar, C19 scares, and the threat of aggressive tapering push these assets lower in a hurry as we've seen many times since 2010.

Start of bear or another brief correction before heading higher?

In stocks, the bullish case is the C19 mutation is less threatening than thought, and the 10-year bond yield's choppy action over the last several weeks is perhaps in anticipation of Powell unable to taper due to economic maladies.

In crypto, the bullish case is RSI showing strength for both BTC and ETH, QE at full tilt, and a possible V-shaped recovery such as post March-2020 or in 2017 when bitcoin would have its 30-40% corrections then shoot higher.

The bearish case for both stocks and crypto is spiking inflation that pushes Powell to continue his hard line stance on tapering which could strengthen the dollar while weakening stocks, bonds, and crypto. That said, keep in mind that in 2017, the Fed hiked rates several times. The discount rate rose from 1% to 2% yet both stocks and crypto had overall uptrends. Given the record levels of debt, the Fed has less room to taper, let alone hike rates.

If the Fed plays it too aggressively, they could spark a global depression. No one at the Fed wants that, so it is likely they will backpedal on the tapering and rate hike issue. Perhaps they can hike once or twice before markets finally capitulate as they did in late 2018 when the discount rate reached 3%. The market couldn’t deal with the higher rates so started into a steep correction resulting in the first Xmas crash on record. Powell then immediately stepped in and calmed  markets by saying he would end the shrinking of the balance sheet. More QE came next.

So if the last decade is any example, we have moral hazard wherein once the market tanks by typically 20%, the fed steps in and saves the day by way of more QE.
ETH vs. BTC

Still, the sharp correction in bitcoin can take time to play out before bitcoin heads higher as we saw earlier this year.

Another clue that a relatively fast recovery carries decent odds as opposed to a full blown and extended bear market is the futures open interest (OI) which once again carried too many longs which were then liquidated. The chain of events cascaded into contract closures on Saturday amounting to a total rinse of 58,202 BTC, the second largest single day change in Futures OI in 2021. 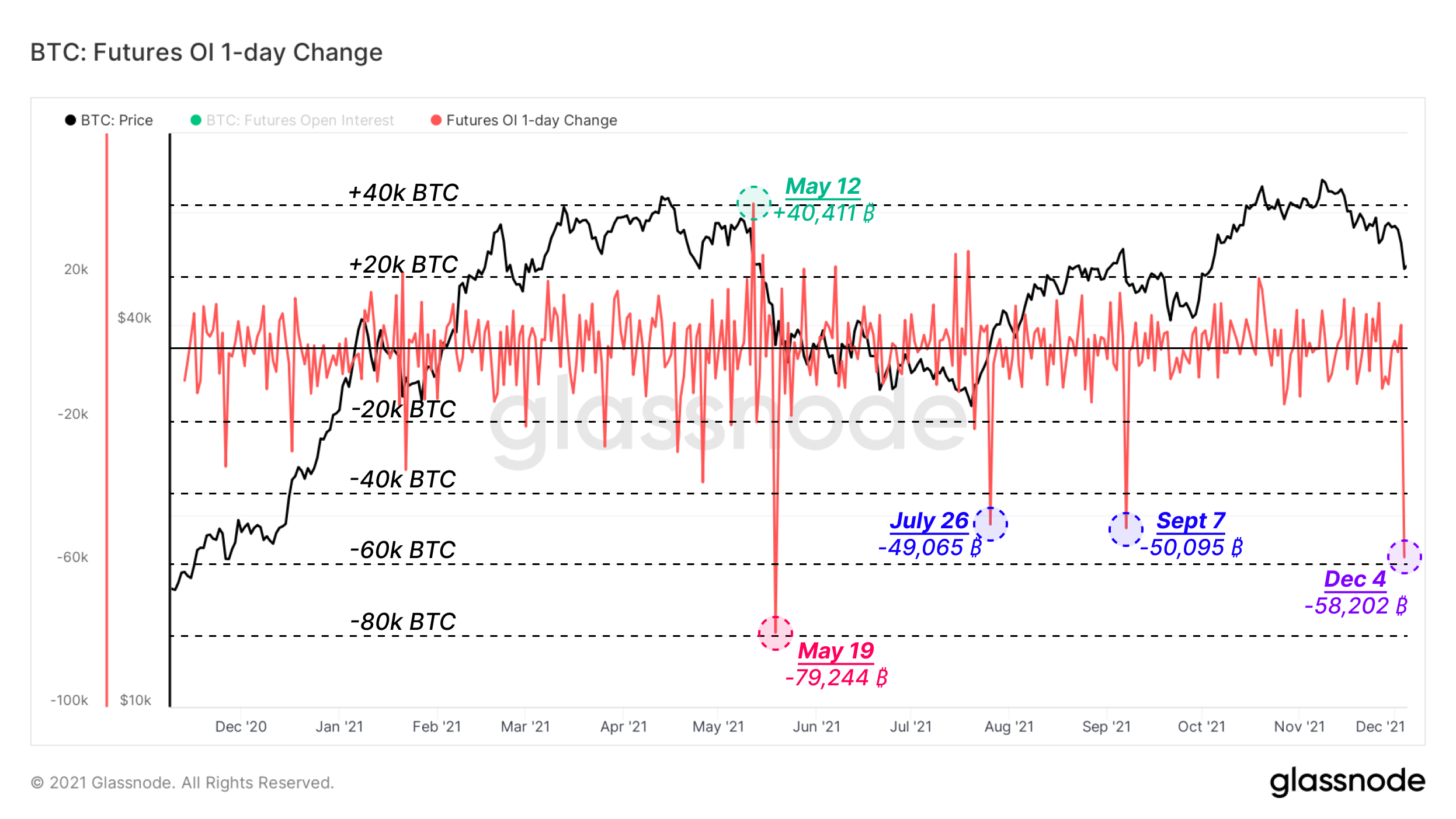 We've seen this happen a few times this year when bitcoin has mini-crashes as a consequence, but then recovers. The collapse has been induced by exchanges unable to carry the onslaught of orders so a large imbalance can result. Another culprit can be the bid-ask spread in the perp markets which ranges typically around 0.1%, but on this occasion, spreads rose between 4-11% on various exchanges. This resulted in huge sell orders of BTC which caused the collapse in price. This was a short-lived (on the order of minutes) liquidity crisis that escalated the bearish overtones. This does not have any bearing on the fundamentals of bitcoin or crypto but speaks to its still nascent age especially when it comes to centralized exchanges.

Yet another clue is the amount of pessimism and bearishness on social platforms about bitcoin and crypto. Seems like many are calling for a big bear, so while $2.1 billion in longs were washed out, the number of shorts that have piled in is notable. The Bitcoin Fear & Greed Index was near an all-time low of 16 out of 100 the other day. The masses have been wrong at such extremes but only when bitcoin is supported by bullish metrics and, of course, price/volume action.

Nevertheless, given the added volatility to an already highly volatile market due to whale-induced flash crashes, always keep your stops in place when it comes to crypto which trades 24/7.
Like what you read?
Let us help you make sense of these markets by signing up for our free Market Lab Reports:
This information is provided by MoKa Investors, LLC DBA Virtue of Selfish Investing (VoSI) is issued solely for informational purposes and does not constitute an offer to sell or a solicitation of an offer to buy securities. Information contained herein is based on sources which we believe to be reliable but is not guaranteed by us as being accurate and does not purport to be a complete statement or summary of available data. VoSI reports are intended to alert VoSI members to technical developments in certain securities that may or may not be actionable, only, and are not intended as recommendations. Past performance is not a guarantee, nor is it necessarily indicative, of future results. Opinions expressed herein are statements of our judgment as of the publication date and are subject to change without notice. Entities including but not limited to VoSI, its members, officers, directors, employees, customers, agents, and affiliates may have a position, long or short, in the securities referred to herein, and/or other related securities, and may increase or decrease such position or take a contra position. Additional information is available upon written request. This publication is for clients of Virtue of Selfish Investing. Reproduction without written permission is strictly prohibited and will be prosecuted to the full extent of the law. ©2022 MoKa Investors, LLC DBA Virtue of Selfish Investing. All rights reserved.
FOR OUR FREE MARKET LAB REPORT :