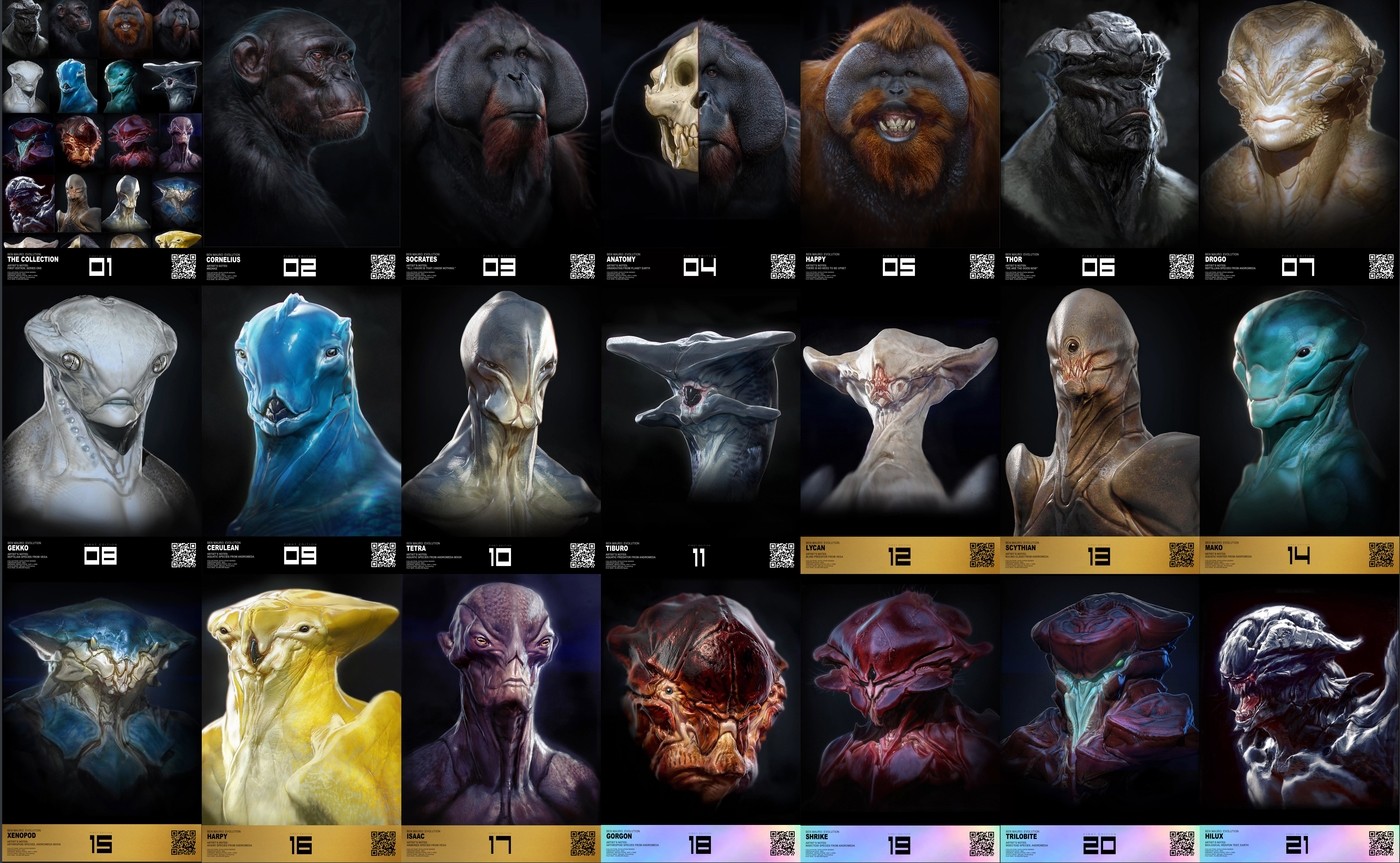 I spent an appreciable amount of time in my teen years playing role playing games which eventually became massive multiplayer online role playing games. But even before computer RPGs evolved, digital items were held in high value. The ones harder to get which required higher level characters naturally held greater value. One could argue these items have no utility therefore should carry no value, yet in the gaming world, the rarest items commanded high value. Indeed, useless items can have an immense monetary value.

In today's world, the metaverse is quickly becoming more substantial. Digital items in game such as Axie Infinity (AXS), Alien Worlds (TLM), and Sandbox (SAND) among others all command value. NFTs share a growing spot in such ecosystems. In a game such as Runescape, certain items such as skill capes could not be traded but only earned by achieving certain skill levels. This greatly increased their social value because obtaining a cape couldn’t be gamed. Such items typically took hundreds of hours of gameplay to earn.

Runescape skill capes are an example of scarcity through time and labor. I've always said time is the most valuable commodity because time is naturally limited making it the most equitable resource. Until one masters time travel or time dilation which would require approaching the speed of light, everyone has the same 24 hours. NFTs can take a page from Runescape by creating an NFT culture built around merit as opposed to money. We can have time scarce NFTs that are labor-intensive or smart-task oriented whose labor is dependent on one's creativity at completing a task. Numerous merit-based NFTs which cannot be bought but earned could include NFTs awarded for voting in a DAO, mastering a skillset, or any other non-monetary achievement.

Switching gears, those at the top may not be sitting so pretty for long. Various recent headlines show that governments, central banks, and institutions are on their back foot as numerous headlines over the last year suggest such as:

The IMF has issued similar warnings as they see bitcoin as a direct threat to their sovereignty. Other headlines read:

That last headline was issued by the opposing party against bitcoin. And that's to say nothing of the Metaverse which such entities have little to zero understanding as of yet. Things are changing at ever increasing speeds which probably keeps them in a state of confusion. Indeed, they're fighting a losing battle. And this is for the greater good. Over 500,000 users in 1 week in El Salvador have jumped onto bitcoin since it was legalized so they can transact value while not paying up to 50% transaction fees to send small money to family. Despite this, the IMF had reported that El Salvadorans were against the legalization of bitcoin in their country. This is another of the many examples of FUD that rages amongst governments and the heavily controlled mainstream media.

While newspapers such as the Wall Street Journal do have informative articles, Ray Dalio caught them out about their gross mislead when calling his organization a cult a few years ago. WSJ also has a soiled, longstanding track record when it comes to much relating to cryptocurrencies. They have published numerous articles against bitcoin and cryptocurrencies over the years such as the one On March 10, 2017 that headlined "Let’s Be Real: Bitcoin is a Useless Investment" when bitcoin was trading around $900. Bitcoin has since risen by 5333%, or $10k invested turned into $543k in just 4 1/2 years. Not bad. Try doing that with stocks.

At the heart of this is the ongoing concern that governments will defend their currencies or they stand to lose much financial control. In consequence, the US government could be cracking down on stablecoins since a digital currency of their own could make such stablecoins obsolete. Indeed, the SEC may go after stablecoins and not just Tether but also the fully regulated USDC.

Nevertheless, the blockchain world is populated with some of the smartest minds. Decentralized, stabilized assets backed by yield bearing assets that keep a stable value that accrues over time is one possible way to overcome SEC restrictions. In such a case, the asset would not be stabilized at a fixed rate but stabilized by yield bearing assets. So instead of fiat backed stablecoins which are inflationary, we could have stablecoins that track the value of real world goods using oracles.

A new stablecoin called $MIM aims to carry these characteristics and is backed by multiple chains which distributes chain risk. It is addressing this issue so could become the defacto decentralized basket stablecoin. This could in time make fiat second to bitcoin which could become the global reserve currency on which the value of real world goods are based. To get to such a situation, inflation would have globally run amuck to where more and more individuals sell their dollars, euros, and pounds, not to mention the smaller currencies in which we already see this occurring, for bitcoin, stocks, and hard assets. Various forms of fiat would go extinct in their current form as they hyperinflate much as the Argentinian peso had to be revalued more than a couple of times as it collapsed, or any of the countless other such examples throughout the last century.

A growing number of fiat currencies would probably be revalued like dominoes across the board similar to prior times over the centuries when one world's reserve currency was overtaken by another while other currencies floundered. In times past, such as pre-WW 2, the pound was the world's reserve currency. Then the dollar took over when the U.S. was victorious after WW 2. The transition began well before WW 2 so the transformative process can take decades. In today's digital world, things move much faster. As it has been said, digital is eating the world. Could bitcoin in time be the next world's reserve currency? And perhaps just in time for the dawning of a more mature Metaverse, home to NFTs.

The U.S. dollar is rising while interest rates on the longer side of the yield curve continue to rise. This suggests increasing odds that tapering will take place sooner than later due to rising inflation. The Fed maintains inflation is transitory as they must use language to justify why they won't taper when the time comes. They've been experts in buying time to avoid having to shrink the balance sheet since the Christmas crash on December 24, 2018.

Given the massive multi-trillion dollar stimulus packages on the way, whether delayed or not, the debt bubble will continue to grow at an accelerating and unprecedented rate which will prevent the Fed from tapering, except perhaps as a token taper, though they must be careful to avoid the all-too-familiar taper tantrum.

Major averages have been showing increasingly problematic price/volume action which pushed the MDM into a cash signal just minutes after yesterday's open before the plunge.
Like what you read?
Let us help you make sense of these markets by signing up for our free Market Lab Reports:
This information is provided by MoKa Investors, LLC DBA Virtue of Selfish Investing (VoSI) is issued solely for informational purposes and does not constitute an offer to sell or a solicitation of an offer to buy securities. Information contained herein is based on sources which we believe to be reliable but is not guaranteed by us as being accurate and does not purport to be a complete statement or summary of available data. VoSI reports are intended to alert VoSI members to technical developments in certain securities that may or may not be actionable, only, and are not intended as recommendations. Past performance is not a guarantee, nor is it necessarily indicative, of future results. Opinions expressed herein are statements of our judgment as of the publication date and are subject to change without notice. Entities including but not limited to VoSI, its members, officers, directors, employees, customers, agents, and affiliates may have a position, long or short, in the securities referred to herein, and/or other related securities, and may increase or decrease such position or take a contra position. Additional information is available upon written request. This publication is for clients of Virtue of Selfish Investing. Reproduction without written permission is strictly prohibited and will be prosecuted to the full extent of the law. ©2022 MoKa Investors, LLC DBA Virtue of Selfish Investing. All rights reserved.
FOR OUR FREE MARKET LAB REPORT :