The Metaversal Evolution Will Not Be Centralized™
Softer Fed?

Just because the Fed starts to lower rates does not guarantee a major low in the stock markets. For example, this did not occur in early 1930 even after the Fed started to aggressively reduce rates. It took over 2 years for major avgs to find their lows back then. This also happened in the 2000-2002 bear market where the NASDAQ Composite had its largest decline ever of -78% despite the Fed aggressively reducing rates from 6% to 0.75% after overshooting rate hikes due to Y2K fears.

Historical returns of stocks and bonds

Interestingly, there have only been three years when both stocks and bonds had negative returns: 1931, 1969, and 2022. 1931 was two years before FDR took the U.S. off the gold standard by making it illegal to hold gold so ordered all Americans to turn in their gold for $20.67/oz. He then repriced gold at $35/oz in 1934, an effective boost to the Fed's balance sheet of nearly 70% which enabled the Fed to increase the money supply. Then 1969 was 2 years before Nixon took the dollar completely off the gold standard where the price of gold had been fixed at $35/oz since it's repricing in 1934. What major adjustments to monetary policy will 2022 bring, and if not this year, perhaps also within the next two years? 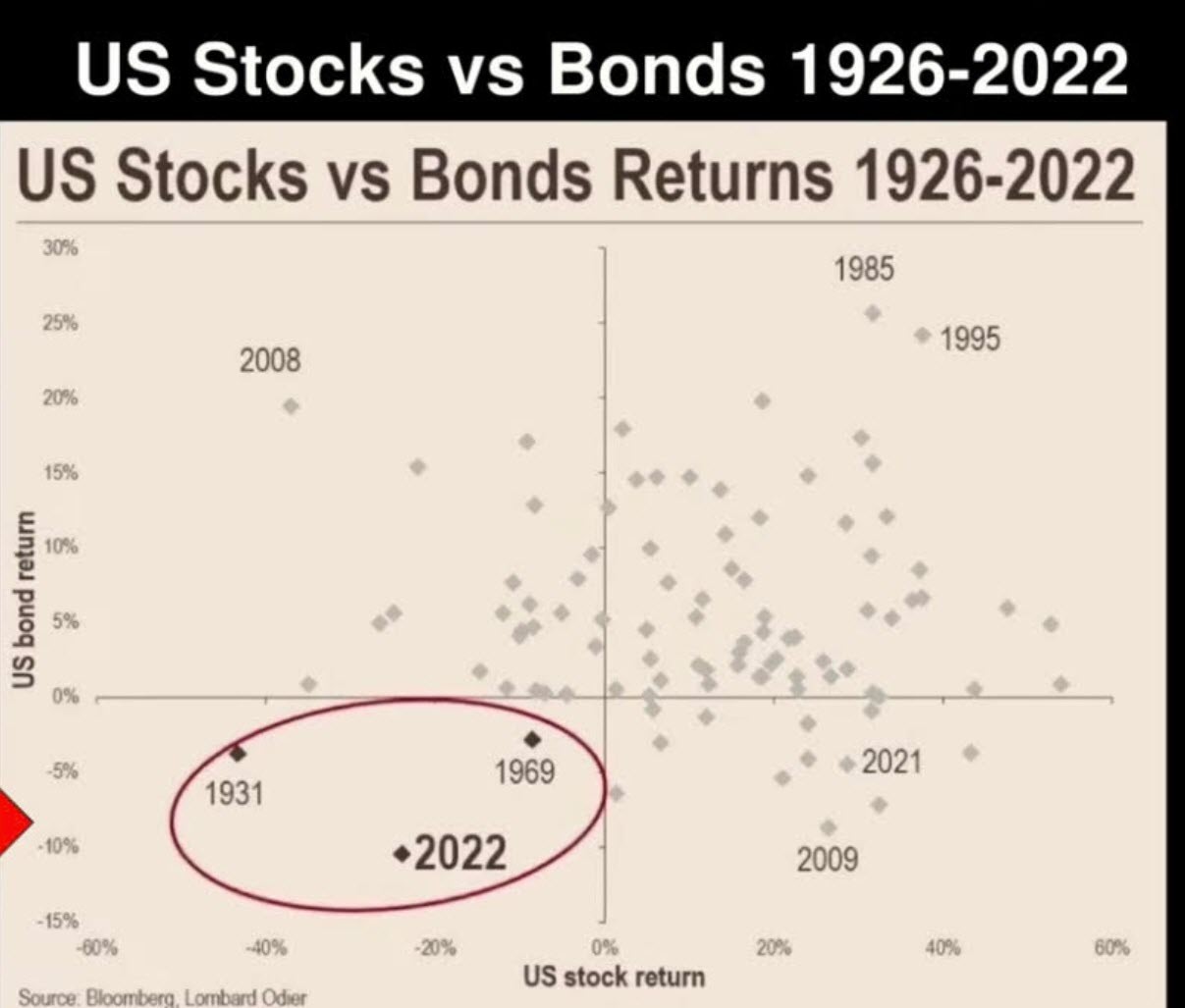 Some argue that the major low for BTC has been hit because whenever the 30dma hash rate crosses above the 60dma, it has a 100% success rate with a maximum drop from the buy signal of -16%. But this time is different. We have an unusually fast increasing hash rate even though the price of BTC has been in bear all year due to a number of factors. Large mining gear orders that were previously placed during higher BTC prices are actively being shipped and plugged in. There is also the ETH merge which forces some miners to switch to mining BTC. Further, as old rigs become unprofitable, their rack space gets replaced by newer models resulting in a net growth in hash rate. 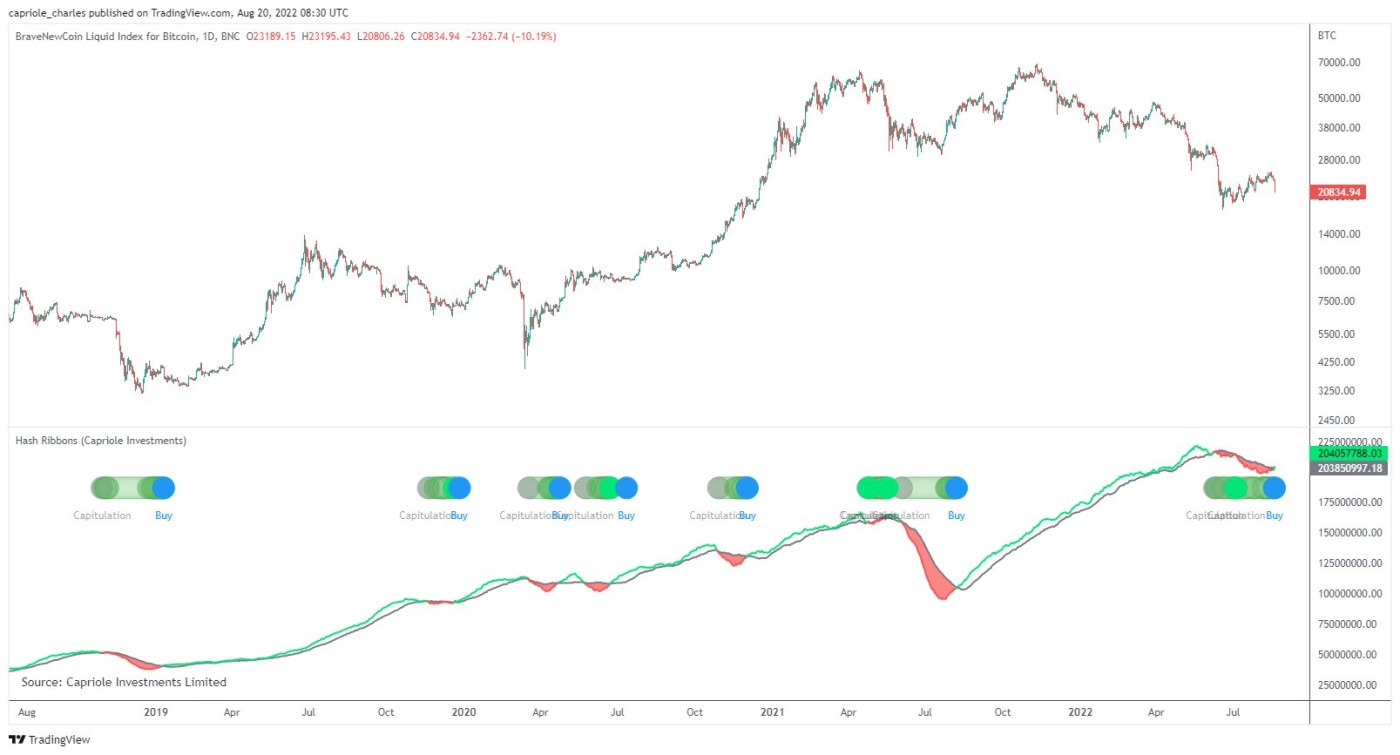 So it still remains likely that BTC will tank to at least $11k before a major low is found. This will likely coincide with the Fed halting rate hikes. But this is no guarantee of a major low if 1930-32 and 2000-02 are any guides. It's more like "$11k and pray."
Like what you read?
Let us help you make sense of these markets by signing up for our free Market Lab Reports:
This information is provided by MoKa Investors, LLC DBA Virtue of Selfish Investing (VoSI) is issued solely for informational purposes and does not constitute an offer to sell or a solicitation of an offer to buy securities. Information contained herein is based on sources which we believe to be reliable but is not guaranteed by us as being accurate and does not purport to be a complete statement or summary of available data. VoSI reports are intended to alert VoSI members to technical developments in certain securities that may or may not be actionable, only, and are not intended as recommendations. Past performance is not a guarantee, nor is it necessarily indicative, of future results. Opinions expressed herein are statements of our judgment as of the publication date and are subject to change without notice. Entities including but not limited to VoSI, its members, officers, directors, employees, customers, agents, and affiliates may have a position, long or short, in the securities referred to herein, and/or other related securities, and may increase or decrease such position or take a contra position. Additional information is available upon written request. This publication is for clients of Virtue of Selfish Investing. Reproduction without written permission is strictly prohibited and will be prosecuted to the full extent of the law. ©2022 MoKa Investors, LLC DBA Virtue of Selfish Investing. All rights reserved.
FOR OUR FREE MARKET LAB REPORT :