All eyes will be on the Senate this week as they vote on their own version of so-called "tax reform" legislation. How the market reacts to the binary outcome of the legislation passing or not passing is difficult to gauge ahead of time, and we would not assume that one or the other will necessarily lead to a market rally or a market sell-off. We prefer to focus on the action of individual stocks.

Meanwhile, the S&P 500 and NASDAQ Composite Index posted new highs, with the S&P 500 clearing and closing above the 2600 level for the first time in history on Friday.

U.S. futures are mixed but mostly flattish this morning as Chinese markets sold off overnight.

Bitcoin has continued to be on a tear as of late, clearing the $9,000 level on Sunday. It has also been part of the conversation at VoSI. Back in early November we reported on the Bitcoin Investment Trust (GBTC) as it posted a pocket pivot on  October 30th at $726. GBTC is one way to play the move in Bitcoin via a stock market vehicle. From there GBTC ran up to a peak of 985 in four days, after which it pulled back sharply in an incoherent dive below its green 20-dema. It then reversed course and ran back up to the prior highs before pulling an outside reversal to the upside two days ago after finding intraday support at the 10-dma. On Friday, GBTC broke out to new highs on light volume. Interestingly, the only "safe" entry point was at the October 30th pocket pivot, because since then the ride has been a wild one with no conventional support to be found at the 10-dma or 20-dema. 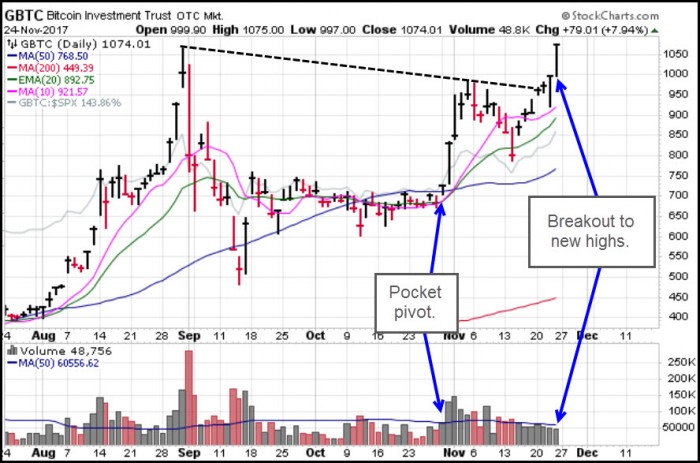 Within the general vein of Bitcoin mania, perhaps the most interesting and crazy situation that came up within the VoSI community over the past week was Riot Blockchain (RIOT), which was brought up by a member during the VoSI Live Webinar two Fridays ago. We commented that this looked worthy of investigation, particularly in light of the pocket pivot that was forming that day along the 50-dma when the stock was trading at a mere $8 a share. Over the next six days RIOT ran up to a peak of 24 even. Now that's a spicy meatball!

RIOT was formerly a bio-tech that went by the name of Bioptix, Inc. but roughly a month ago tossed its medical device business, changed its name to Riot Blockchain, Inc.,and began focusing on Bitcoin and Ethereum blockchain technology. It has been busy as of late buying up cryptocurrency miners.

For this reason, RIOT is obviously a corollary to Bitcoin craze, and its move this past week is no doubt a function of the mania surrounding Bitcoin and the general cryptocurrency phenomenon. Anything related to blockchain and cryptocurrencies is like pixie dust being sprinkled on a stock, leading to rapid levitation. After being sprinkled with a hefty dose of crypto-pixie dust, RIOT's nearly 200% move in just six trading days is reminiscent of late 1999 and the dotcom bubble mania of that period. 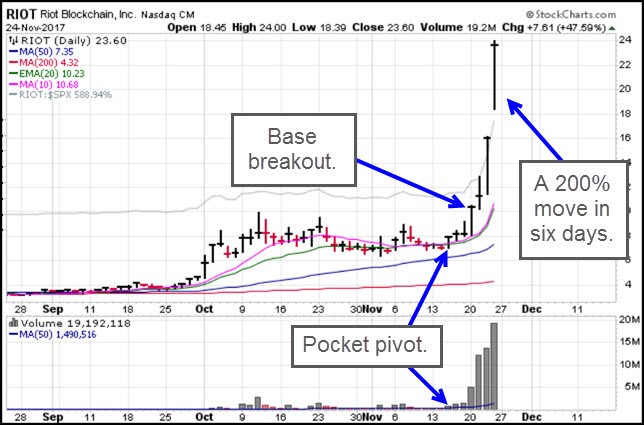 Meanwhile, Canada Goose Holdings (GOOS), which we reported on to members as a Buyable Gap-Up buy on November 14th, has flapped its way 17% higher since finding support at the 10-dma on a normal, lower-volume pullback to the line.  But, compared to RIOT, GOOS looks like a snail in motion! 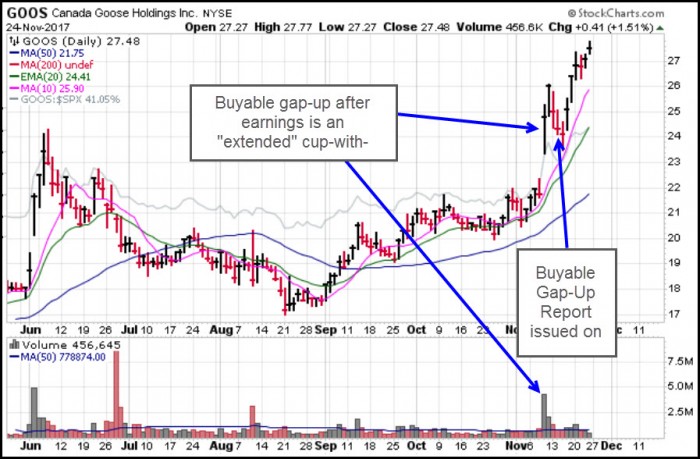 The moral of the story is that even during a so-called "quiet" Thanksgiving trading week, there has been plenty of trade-able action underneath the surface. You just have to find the right ideas at the right time. Happy trading.
Like what you read?
Let us help you make sense of these markets by signing up for our free Market Lab Reports:
This information is provided by MoKa Investors, LLC DBA Virtue of Selfish Investing (VoSI) is issued solely for informational purposes and does not constitute an offer to sell or a solicitation of an offer to buy securities. Information contained herein is based on sources which we believe to be reliable but is not guaranteed by us as being accurate and does not purport to be a complete statement or summary of available data. VoSI reports are intended to alert VoSI members to technical developments in certain securities that may or may not be actionable, only, and are not intended as recommendations. Past performance is not a guarantee, nor is it necessarily indicative, of future results. Opinions expressed herein are statements of our judgment as of the publication date and are subject to change without notice. Entities including but not limited to VoSI, its members, officers, directors, employees, customers, agents, and affiliates may have a position, long or short, in the securities referred to herein, and/or other related securities, and may increase or decrease such position or take a contra position. Additional information is available upon written request. This publication is for clients of Virtue of Selfish Investing. Reproduction without written permission is strictly prohibited and will be prosecuted to the full extent of the law. ©2022 MoKa Investors, LLC DBA Virtue of Selfish Investing. All rights reserved.
FOR OUR FREE MARKET LAB REPORT :