The EU, China, and the IMF

Then over in China, the weakest Chinese growth data in three decades weighed on investors. China’s gross domestic product for 2018 rose 6.6%, the slowest annual pace that the country has recorded since 1990. While some may think the trade issues with the U.S. are to blame, the trade issues were not the primary cause. In a recent report, Chinese manufacturing came in weaker than expected due to cooling global and domestic demand. This suggested global trade conditions are not limited to China but to the global economic environment as a whole which remains tenuous at best.

The International Monetary Fund underscored this by cutting its outlook for global expansion in China and in the EU citing trade issues among other things. Whether the current trade issues with China settle amicably or not, there’s a concept called the Thucydides Trap. When there’s a rising power rivalling an existing power, there’s a heightened probability of war. This has happened 16 times in the past 500 years, and 12 out of 16 times, there was war. Economic wars between two major countries often become military wars. The Chinese economy will be considerably larger than the U.S. economy in 20 years. Goldman Sachs estimates that by the end of the next decade, both India and China will be the world's superpowers economically. Many believe the U.S. wont go down without a fight.

So we have global economic issues along with the trade issues with China which could induce a global recession. This should prevent the U.S. Federal Reserve from acting hastily with respect to hiking interest rates further. Trump's economic advisor Larry Kudlow recently suggested interest rates should be kept low so the economy can continue to grow.

But can the U.S. grow if the rest of the world stagnates? Some believe the U.S. is far more insulated economically to withstand a global economic recession. Some point to manufacturing in the U.S. which has shown the best 12-month stretch in 23 years. Meanwhile, small-business optimism is near the highest level in 35 years. There has been a revitalization of business spending due to Trump's tax cuts from 35% to 21%.

But if the U.S. were to continue to grow while the rest of the world sagged, this would fly in the face of the last couple hundred years where a recession in one prominent area of the planet would drag down the rest of the planet. Economies have always had a high degree of correlation.

Nevertheless, this QE-induced bull market which did enter bear market territory for all of 2 days in December before bouncing may continue. Whether predictions of a sluggish market made by both Ray Dalio and Stanley Druckenmiller come true depends on how much QE is pumped into the system. Global QE remains relatively pronounced, though less than before as the European Central Bank has halted its bond buying from EUR 30 billion to 15 billion and now to zero. ECB rate hikes will most likely be postponed from this summer to end of the year.

As the graph below shows, the 12 month change in the level of total central bank assets as a percentage of combined GDP. This change went negative in mid-2018. 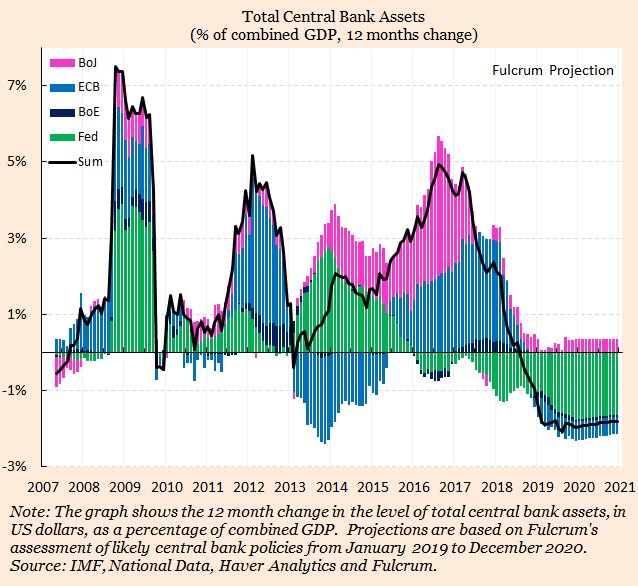 This underscores how the total sum of global QE has diminished which puts further strain on the global economy that is sputtering. Meanwhile, the U.S. economy remains the tallest standing midget. Thus the flow of QE needs to be maintained to prevent a serious global recession. The Fed realizes this, thus Chairman Powell has now said that the FOMC “would not hesitate” to slow down balance sheet normalisation if they ever decided that the size or composition of the Fed’s balance sheet is “part of the problem”. Yet the Fed's balance sheet has only scratched the surface as far as normalisation goes. Quantitative tightening has been a very slow process. Powell also implied the Fed will do what it must to keep the bull market alive. This created a sharp bounce that began on December 26, 2018.

So given that the Fed may not be able to hike rates even one or two more times due to a slowing global economy, the question is how the market would react if the Fed were forced to not only halt future interest rate hikes and quantitative tightening, but launch a QE4. Other central banks such as the ECB may also be forced into restarting or increasing their bond buying programs.

The tight rope central banks are walking has become even thinner as they have less headroom than ever before given that interest rates are still at record low levels globally, and in the U.S., rates are still well below historical norms. But I suppose any resurgence of QE-generated capital money flow would inevitably prop markets as before, thus extending the bull run. But the amount of QE is likely to be less than before so Dalio and Druckenmiller's prediction of gains in the stock market of between 0 to 5% per year over the next few years may come true.